An early look at LG's new Watch Urbane with LTE

LG has been making Android Wear smartwatches since day one, and it's kept busy. It's put out three smartwatches so far that run the year-old operating system, and as of today, it's announcing a fourth: a second edition of the Watch Urbane. The original Watch Urbane was introduced in November to lukewarm reviews — it's a pretty chunky device without a lot of style — but now the new Watch Urbane is here to address that and push the platform forward even farther.

This time around, LG has given the Watch Urbane an ever-so-slightly larger 1.38-inch display (up from 1.3 inches) with a higher resolution, of 480 x 480 pixels. Even with the bigger screen, the watch's body is actually getting substantially smaller. The excess metal at the top and bottom of the original have basically just been chopped off, and a ring around its circular bezel makes what remains there appear smaller as well. The second edition of the Watch Urbane still isn't something I'd consider wearing, but this model looks far more like something that people who are already into large watches could get into.

LG also seems to have taken a cue from Apple — albeit, potentially a misguided one — and added additional hardware buttons to the watch. It still has a central button in the middle of its side for pulling up the watch face, but there's now a tall button above it for jumping straight to your favorite contacts and another button below it for jumping right to the LG Health app. Those buttons won't be reprogrammable, but given the focus that smartwatches have been putting on fitness, it's a sensible choice. LG says there'll be a "personal coaching" feature built into the app, too. 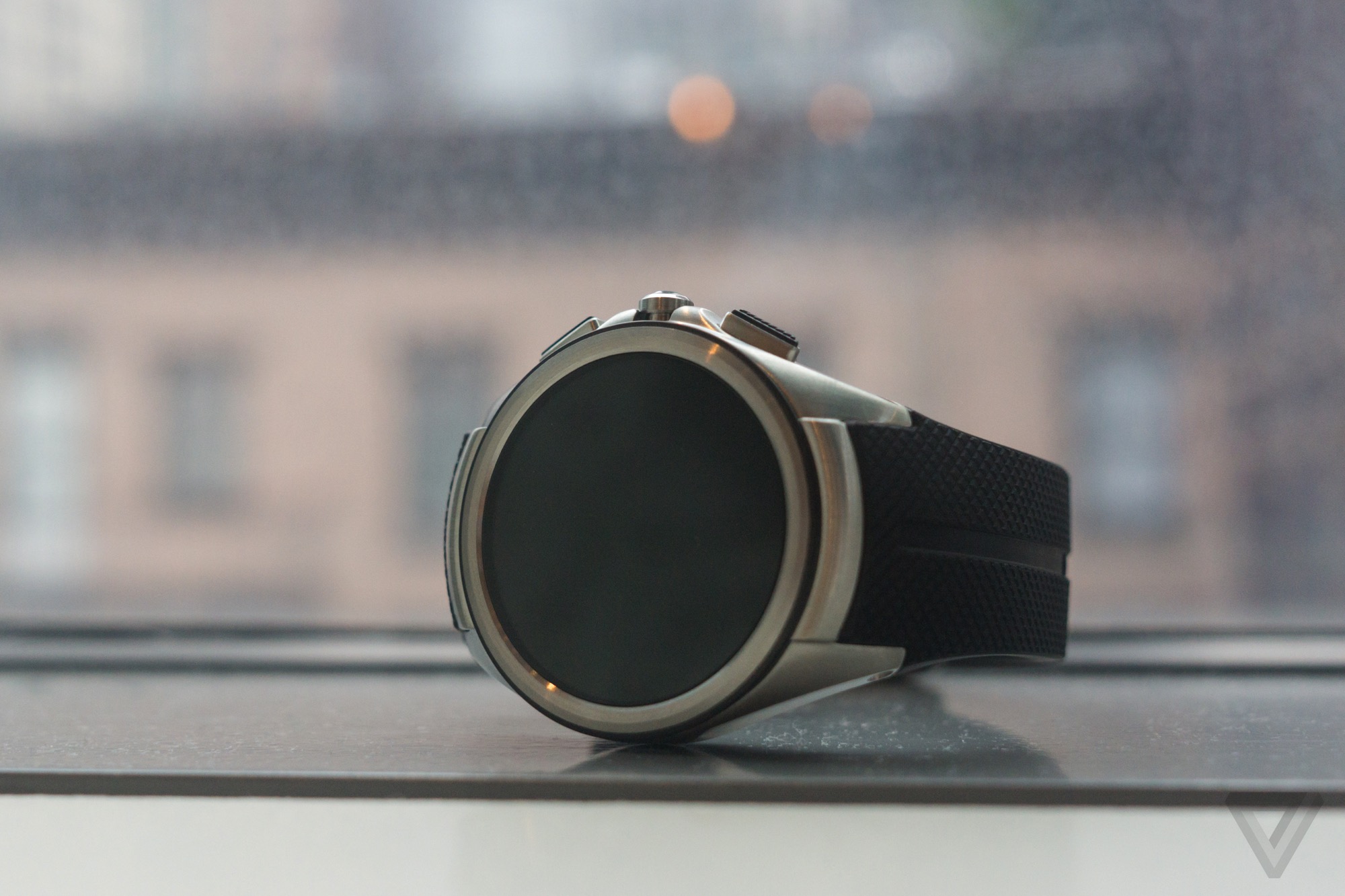 The contacts button could be an important one, too. That's because this version of the Watch Urbane has a SIM card and a data connection, so you can use the watch entirely without a phone and even make and receive phone calls on it. LG demoed a call at an event previewing the watch, and it... worked. There's not much more to say about it. It's a phone call. It's kind of a weird thing to do on your wrist. But you can do it, and I'm sure some people will. LG suggests that people are also likely to use this as a way to receive calls and then beam them over Bluetooth to another external device, like a car stereo. 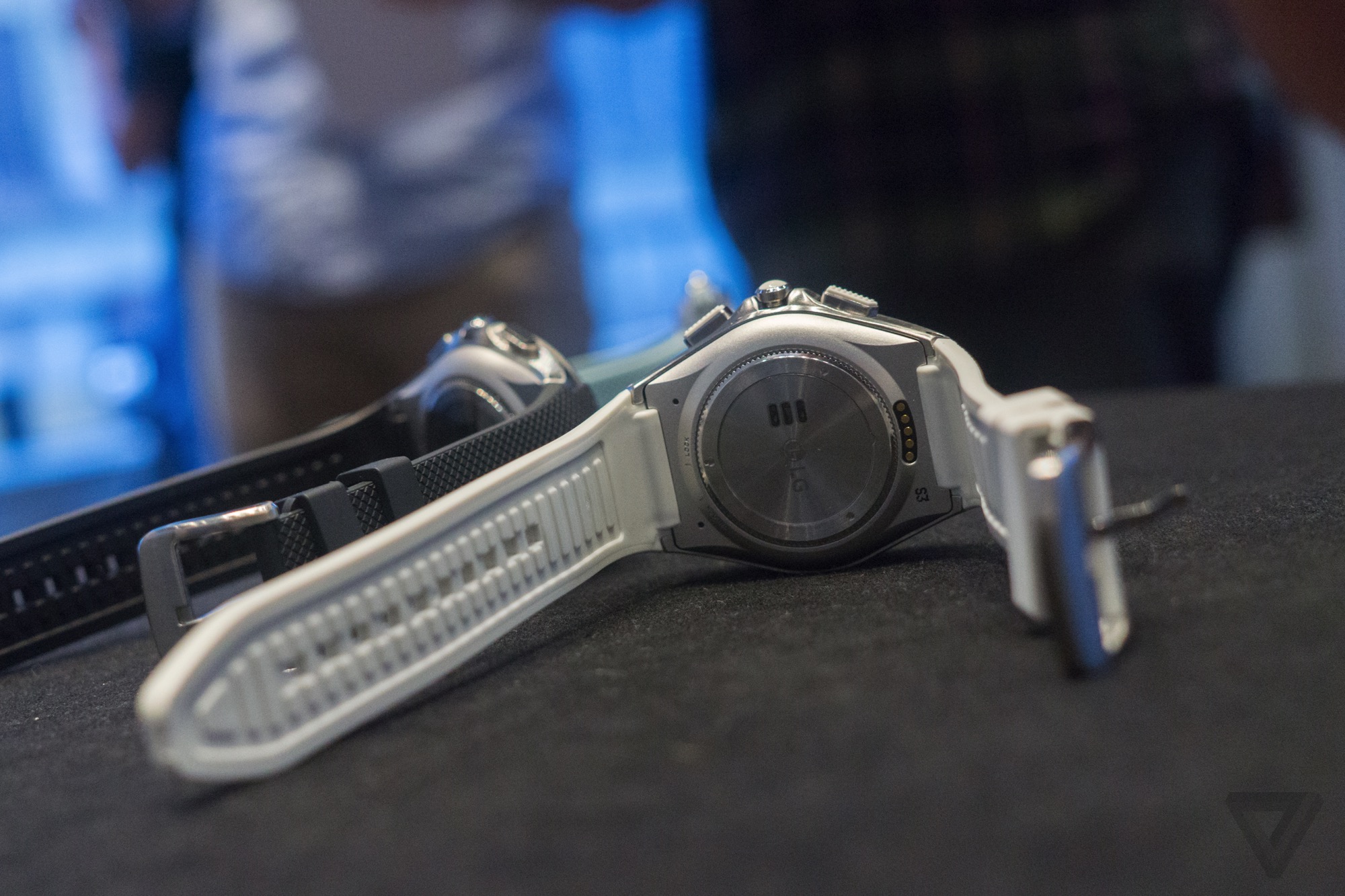 Watch bands aren't swappable because they have tech built inside 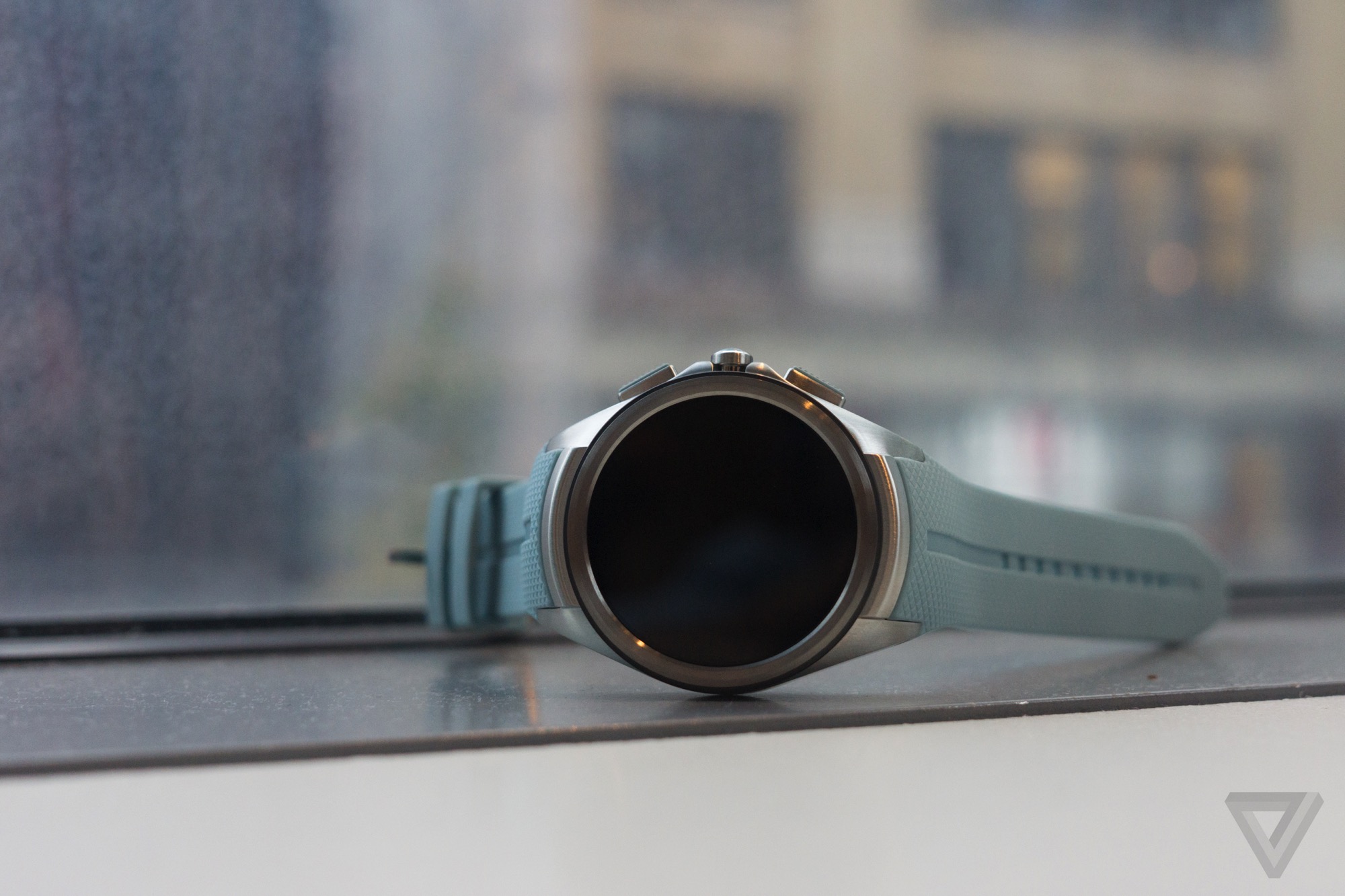 To fit a cellular radio and the rest of the watch's tech into a smaller body, LG made one compromise: it built radios into the base of the watch straps, so they're no longer swappable. That means you choose one of the watch's four strap colors: white, black, pale blue, or brown, and you'll have to stick with it. They're all rubber straps this time around, too. Like the Urbane itself, they're also kind of on the chunky side. On the plus side — for LG, at least — LG gets the distinction of being the first manufacturer to put a cellular radio in an Android Wear watch.

LG also previewed a dozen custom watch faces, including some that included complications for the weather or your current fitness stats. For the most part, though, they stuck to the faux-opulent styles seen on the original Watch Urbane. They don't actually look out of place when they're lit up on a watch that's on someone's wrist, but they're also very much not going to be everyone's style. Android Wear, of course, supports third party watch faces, so LG's design choices here shouldn't necessarily be a problem, unless you want to use a watch face that taps into LG's fitness app.

The Watch Urbane otherwise includes the features and sensors you'd expect in an Android Wear watch. There's a heart-rate sensor, Wi-Fi, Bluetooth, and GPS. Its stainless steel body is water and dust resistant. The display can remain on at all times. And the battery, LG says, should last a solid day, if not a one and a half to two days.

LG isn't announcing pricing or availability for the new Watch Urbane just yet, and that's probably because the watch isn't ready. LG basically told us that it's only previewing the watch today to get ahead of leaks. It only brought a single watch that was working and turned on, and that model was worn by its presenter. The other watches — the ones available to press — were turned off, so my impressions are limited to looks only.

The Watch Urbane's big bet is that people are going to want a smartwatch that's always connected. LG is certainly right about that, but whether the tradeoffs it takes to get LTE — including paying for data every month — are worth it remains an open question. One gets the impression that LG is rushing to get this watch out there so that it can potentially strike gold by having the first offering with LTE. Even if that's the case, it's still making some improvements to the Urbane. Custom straps may be a big loss, but this smaller body looks far more reasonable.