If you haven't played the Uncharted games, play them on PS4

The Nathan Drake Collection is the perfect primer

If you’re part of the 80 percent of PlayStation 4 owners that developer Naughty Dog claims have never played the Uncharted series, drop what you’re doing after reading this article and go pick up The Nathan Drake Collection, which came out over the weekend. It bundles the three Uncharted games together in one remastered package for PS4, representing the best way yet to experience the most endearing and explosive trilogy ever to hit a PlayStation.

Uncharted is essentially the video game world’s answer to Indiana Jones, serving up a breakneck mix of exploration, action, and puzzle solving across the globe. With its bright colors and likable characters, Uncharted: Drake’s Fortune was swashbuckling, charming, and romantic in a way that big action games rarely were — particularly in 2007. It kicked off a period where it seemed like every game’s lead was voiced by Nathan Drake actor Nolan North, granted, but it did feel fresh at the time. 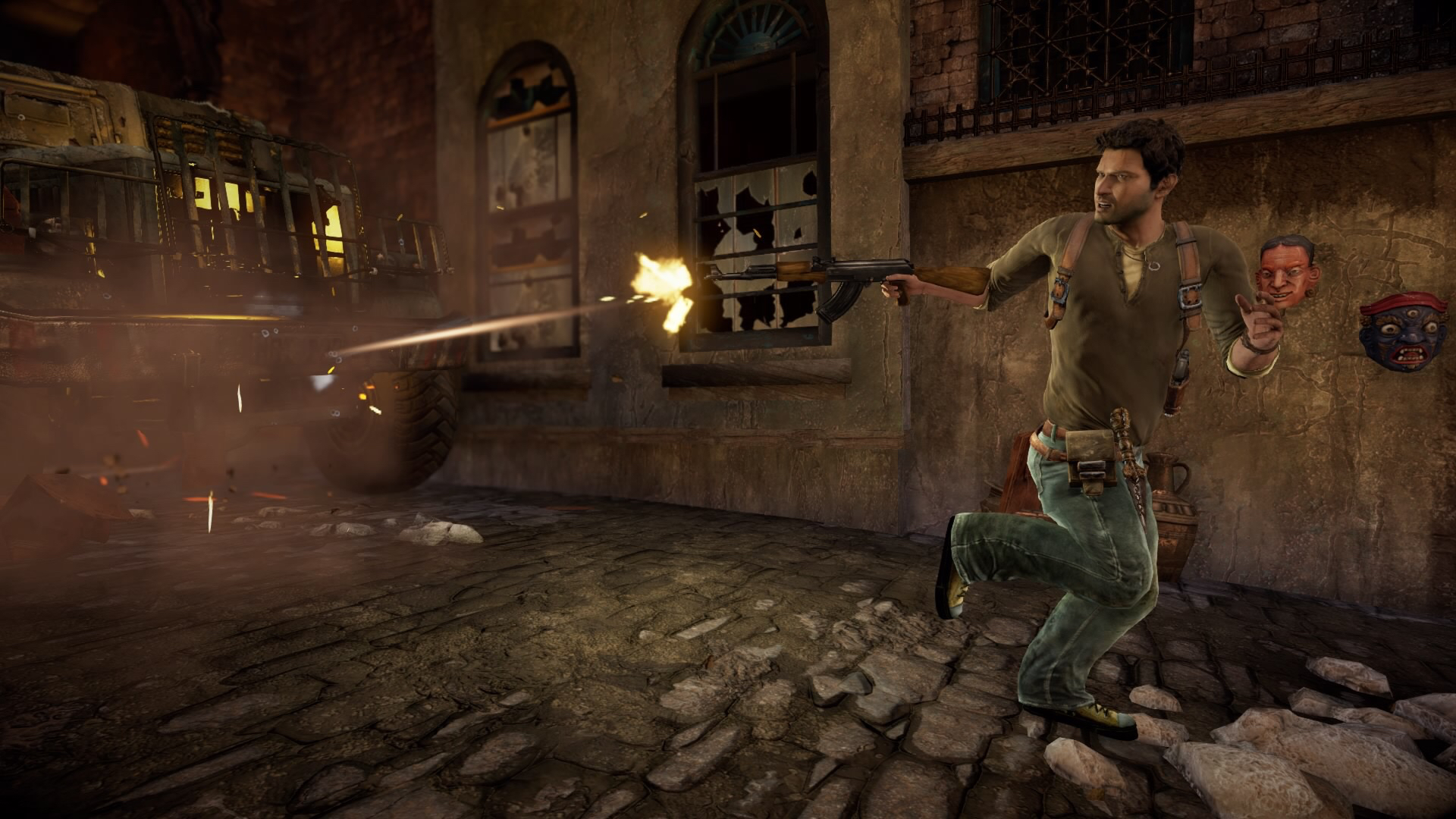 Drake’s Fortune, the first game in the series, has undergone the biggest graphical overhaul in this collection, because beyond the ambition of their designs each member of the series is pretty much on par with each other on PS4. Naughty Dog is one of the most technically accomplished studios in the world, and each Uncharted outdid its predecessor to become the most impressive PS3 game of its day.

The Nathan Drake Collection, however, updates assets across the board to make for a smoother transition between each title in the trilogy. Textures, lighting, and character models have all been improved, and each game runs at 1080p and 60 frames per second. Bluepoint Games, which handled the conversions, deserves a ton of credit for a slickly produced package. But Drake’s Fortune still feels a little outdated to play today, with less imaginative combat design and clunky controls that don’t hold up well next to the later two games.

Uncharted 2 is the true classic

Uncharted 2: Among Thieves is the true classic in this collection, with incredible direction, much-improved pacing, and sensible tweaks to the action — it’s one of the most confident sequels ever made, and the game that cemented the series as a PlayStation mainstay. It’s where Naughty Dog came into its own as a creator of cinematic, heart-stopping set pieces that seamlessly slot in alongside the core action. Who could forget the moment in Nepal when a helicopter demolishes the building you're standing in?

The images in this article were taken using The Nathan Drake Collection's photo mode, a feature that's getting more and more common in action games like Infamous: Second Son and The Last of Us: Remastered. It lets you freeze the action, adjust the camera, and apply effects like depth-of-field to enhance your shot.

The mode here is a little limited, however. It can be hard to move the camera around, and you usually can't take photos during a set piece or even with a gun drawn. Still, it's possible to produce some cool results, and the mode is a good way to show off the collection's impressive fidelity.

And while Uncharted 3: Drake’s Deception overreaches a little in its attempt to end the series on a downbeat note, it manages to squeeze in some spectacular moments. There’s a sense that some of the regular encounters were rushed, though — Uncharted’s combat has never been as slick as Gears of War, which it borrows much from, but Among Thieves does a better job of designing stages around Uncharted’s more athletic mechanics. Between that and some sluggish pacing, Drake’s Deception can be a bit of a slog.

Still, these all remain great games, and The Nathan Drake Collection is the perfect way to get yourself up to speed before Uncharted 4: A Thief’s End drops next year. Uncharted 4 is probably the most anticipated PS4 game yet, and it's certainly the biggest exclusive title for a console sorely lacking. This holiday, The Nathan Drake Collection is likely to be the PS4’s biggest draw, going right up against the Xbox One’s Rise of the Tomb Raider. If you’re a series veteran desperate to make the most of your PS4, this might not be so exciting. But if you’re yet to play these games, this collection is a hell of a solid package. The Uncharted trilogy is one of gaming’s most beloved, and this is the way you should get on board.

Read next: Inside the original pitch for Uncharted