The unbearable lightness of being an LG laptop

LG is one of the most innovative companies in the world, but you wouldn’t know it by looking at its products. Forever oscillating between frumpy, plasticky, and gimmicky, LG’s industrial design is characterized by a great deal of effort and very little effect. This makes it difficult to review the company’s products: do I prioritize the laudable electronics within or the unlovable plastics without? And why doesn’t LG ever seem to be able to get both aspects right?

The Gram laptop is LG’s latest attempt at correcting its ways, and on first glance, it looks quite handsome and promising. Like a performance-tuned car, this 14-inch PC sheds all comforts and extras — such as a touchscreen or a backlit keyboard — in the pursuit of the lightest and most efficient form. At 980 grams (2.16 pounds), the Gram weighs less than Apple’s 11-inch MacBook Air, while thin bezels around its display help it fit within the same physical footprint as the 13-inch Air. It’s not all plastic, either, as LG is using fancy magnesium alloys to enhance this laptop’s durability. Microsoft has also bestowed its Signature Edition label upon the Gram, certifying that it’s free of added bloatware that might spoil the Windows 10 experience.

LG has turned lightness into an obsession, and this is its physical manifestation

It’s easy on the eyes, it runs fast right out of the box, and it’s lighter and smaller than any other 14-inch laptop on the planet. The LG Gram looks like it might be a really good laptop, but looks can be deceiving.

My first sensation upon unboxing the LG Gram is one of profound familiarity. That’s an odd thing to experience with a computer that marks LG’s debut in the Western laptop market, but it’s there all the same. The reason? Pretty much everything about this machine has been modeled on Apple’s MacBook line, from the minimalist white packaging to the look and shape of the laptop itself. The Gram is essentially a MacBook Air made by LG, replacing the aluminum with plastic and magnesium. In fact, it’s so reminiscent of Apple’s computers that I instinctively reached for the top right of the keyboard to start it up and, sure enough, that’s where the Gram’s power button resides.

Before I’ve turned it on, LG’s Gram betrays a few of its shortcomings relative to heavier and more solidly built machines like the Air or the Dell XPS 13. I hate to say it, but the Gram feels flimsy. It creaked as I was extracting it from the box and continues to do so on a regular basis. There’s a hollow space between the laptop’s bottom cover and its internal components, which I can press into with my thumb. Flex is also apparent across the keyboard, palm rests, and display. For all of LG’s claims of using the same advanced magnesium alloys as can be found in race cars and spacecraft, I could easily be convinced that the Gram is made entirely out of bad old plastic. 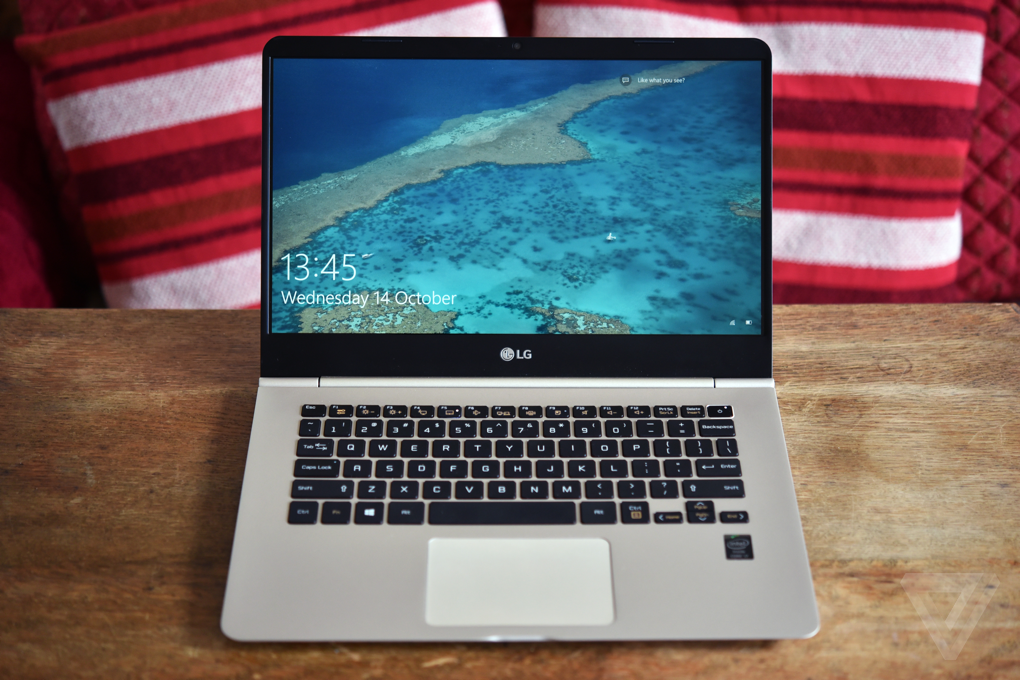 Two other significant design deficiencies emerge as soon as I start typing on the LG Gram. Firstly, the screen wobbles. A lot. Sat on a perfectly flat surface, and without any undue violence on my part, this laptop’s display will do a full performance of the Dance of the Sugar Plum Fairy in the space of a paragraph or two. It’s distracting, and especially unfortunate for a laptop whose primary utility will be for writing and taking notes on the move.

The other issue arises from the lack of a backlit keyboard. I don’t need to look at the keyboard as I type, but I do glance at it, even if only to find the media controls or brightness adjustment buttons. It’s at those moments that the LG Gram becomes irritating — particularly because the touchpad indicator and power button keep shining at me with their built-in LEDs. The Caps Lock key also gets one, which makes me wonder how much more difficult or expensive it would have been for LG to just complete the full keyboard set. An array of backlight LEDs might have spoiled LG’s sub-kilogram marketing shtick, but that’s a sacrifice worth making. 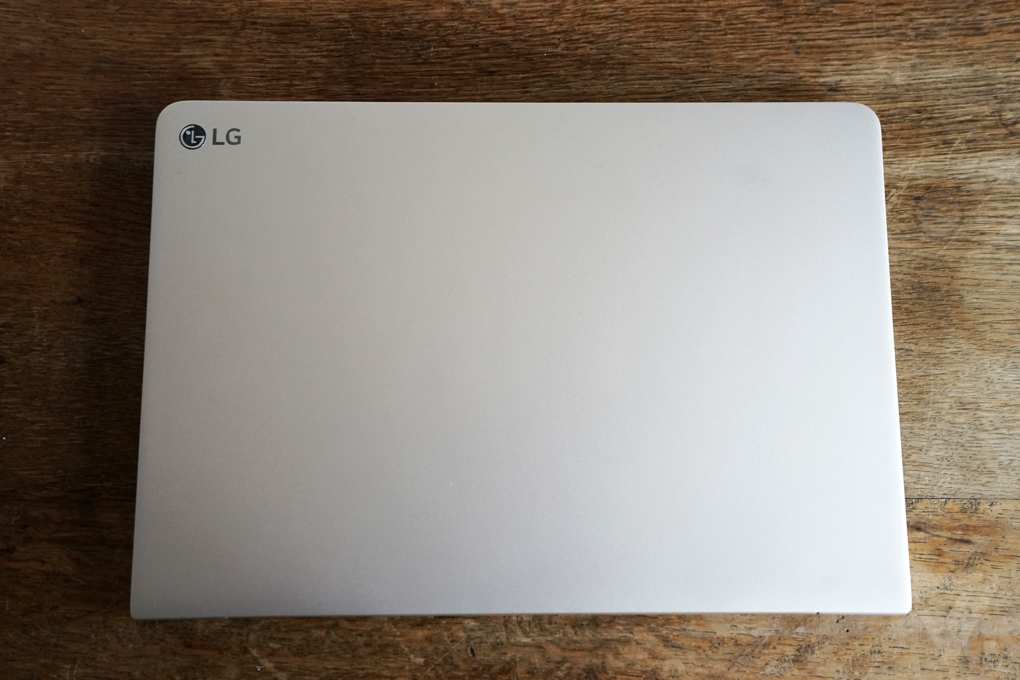 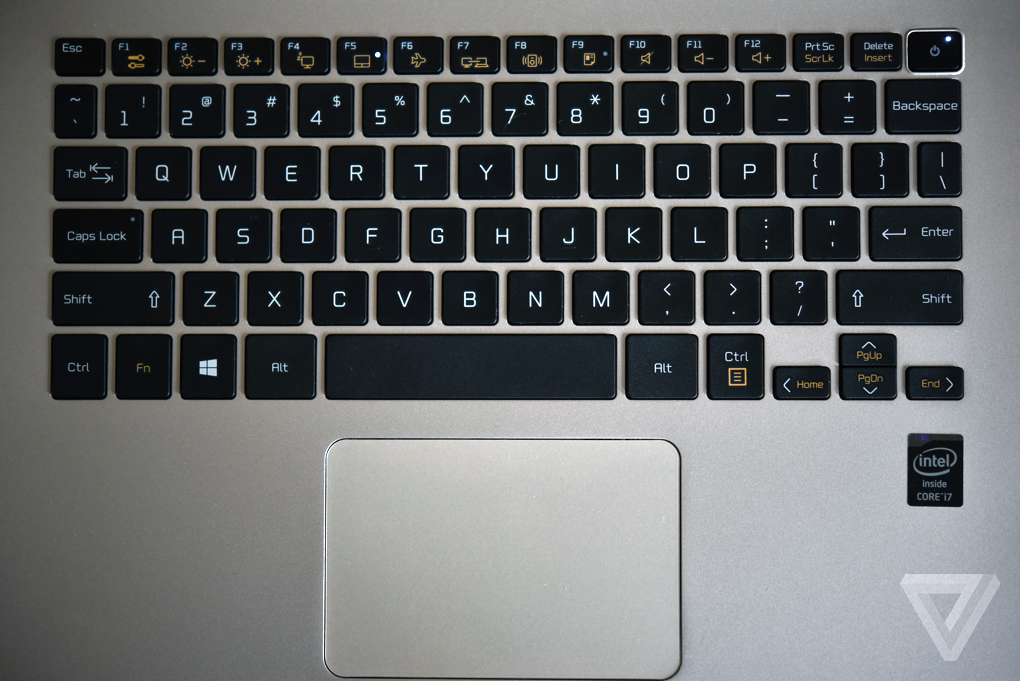 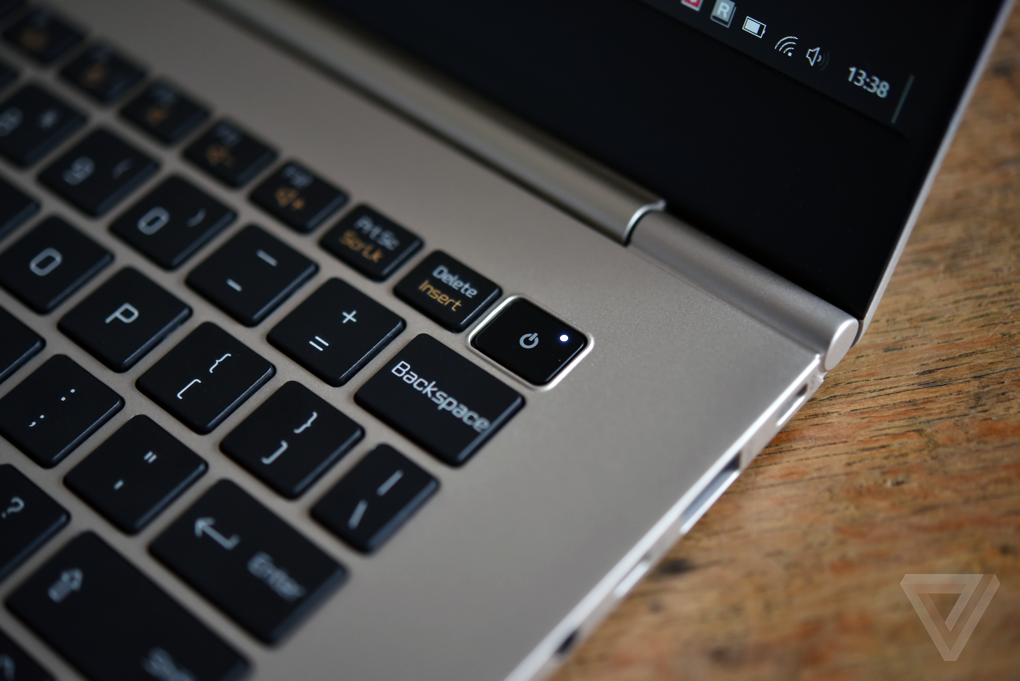 The good news about the Gram’s keyboard is that it’s very comfortable to type on. The keys are large and well-spaced, and I’m gratified to find full-sized Shift keys sitting alongside an easily identifiable set of arrow keys and a Ctrl button located exactly where it belongs: in the bottom left corner. Too many laptop manufacturers play fast and loose with the positioning and sizing of the buttons, which tends to aggravate users rather than improve their experience. The Gram’s only deviation from the standard layout is in bumping the Delete key in the top right corner for the power button. LG has done this in a really clever way: it’s made the power key flat, giving it no travel and no chance of being accidentally pressed. That makes it easy for me to find the Delete key by touch alone, and ensures that the only time I press the power button is when I truly want to.

LG has also done a reasonable job with the touchpad. Low-quality touchpads have been the bane of Windows laptops for many years now, but the Gram is generally reliable and gets things done without much fuss. I can forgive its occasional hiccups, such as failing to recognize two-finger scrolls or getting confused about the direction. They are exceptions rather than the rule. The onboard software also allowed me to create a couple of productivity-enhancing shortcuts: three-finger tap to close a window, and a four-finger tap to show the desktop. LG’s trackpad isn’t as smooth or easy to use as Apple’s perfectly tuned MacBook touchpads, but then what is?

Displays are a traditional strength of LG devices, and that trend continues with the Gram laptop. The 14-inch, 1080p IPS panel on this PC lacks fancy extras like touch, edge-to-edge glass, or a spectacular resolution, and settles instead for just being very good. It offers excellent viewing angles and great contrast, with a level of black that is indistinguishable from the black bezel around the screen. As a longtime MacBook Air user, I feel transported into the future when looking at the LG Gram’s beautiful display. Anyone else that hasn’t yet upgraded to a laptop with an IPS display will enjoy a similarly substantial sense of an upgrade when moving to this LG PC. Of course, there are higher-resolution alternatives out there, such as Lenovo’s Yoga 3 Pro, Toshiba’s Kirabook, Dell’s XPS 13, and Microsoft’s Surface Pro 4 and Surface Book. For me, however, the LG Gram’s screen is perfectly sufficient, and I’d rather not pay the price premium commanded by higher-end panels if I don’t have to.

The two most satisfying aspects about using the LG Gram are its compactness and its software. I have to keep reminding myself that this is a 14-inch laptop, because it never feels like one. I can carry the open LG Gram around while holding it by just one corner — which is a habit many MacBook Air users develop while moving around the office. The hinge might wobble while I type, but it’s otherwise trustworthy and opens and closes with a smooth, reliable motion, and also holds my preferred position well. So all of the foregoing trade-offs do come with a payoff. 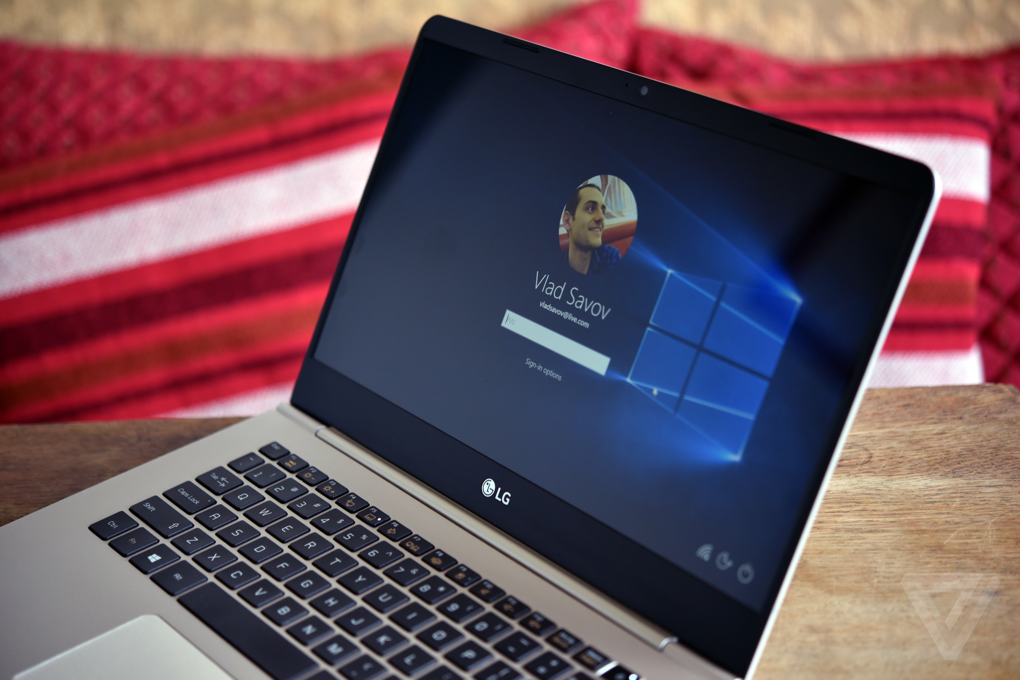 The good things, like Windows 10, are swept away by a wave of compromises

Substantial credit has to go to Microsoft for what it has done with Windows 10. The new operating system feels truly fresh and novel, and successfully marries all the useful additions of Windows 8 with the familiarity and underlying strengths of Windows 7. LG has done nothing to undermine these intrinsic advantages, and has in fact augmented them in a couple of ways. The LG Control Center is a lightweight piece of PC management software, which achieves the rare distinction of not being terrible. I quickly grew accustomed to using it over Microsoft’s defaults for tweaking the Gram’s basic settings, as I found it quicker and easier to use. The other addition is LG’s Instant Booting, which, true to its name, ensures the laptop is ready to use almost immediately, whether it’s waking from sleep or a fully shut down state.

The LG Gram I am reviewing is the top-spec 2.4GHz Core i7 model, so there should be no surprises about it being satisfyingly fast. If you live in the browser like I do, you’ll never feel starved for power with this machine, and typical productivity apps like Microsoft Office and Adobe Photoshop are also not a problem. I wouldn’t suggest turning this into your mobile 3D-modeling rig, but it certainly has the performance to satisfy most people’s needs. There’s an unfortunate cost to all this power, however, even with an ultra low voltage Core i7-5500U CPU. The LG Gram’s fan spins up quite often to keep the dual-core processor cool, and sometimes it does it at completely innocuous moments, such as when I’m simply loading up the browser. I’d also have preferred to see this laptop specced with the newer Intel Skylake processors, which feature the company’s sixth-generation microarchitecture, a successor to the fifth-gen inside the Gram. 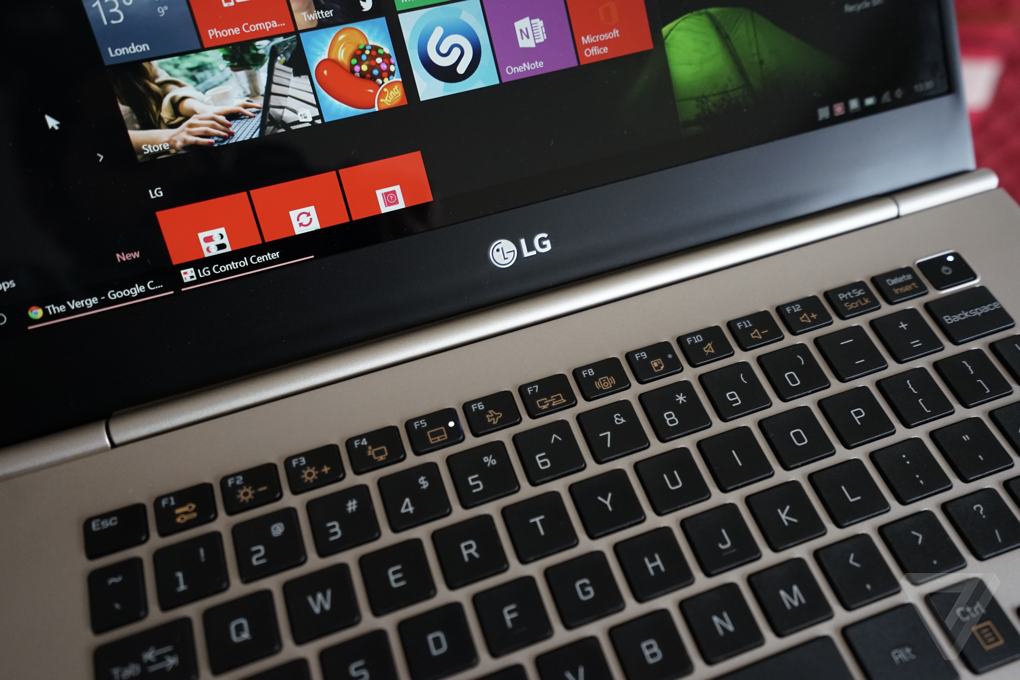 LG forgot to put a battery inside this thing

Perhaps a Skylake processor might have done something to help the LG Gram’s biggest weakness: battery life. There is basically no way to get more than 5 hours of regular use from this laptop. With brightness set to 20 percent (which still feels adequate in a dark room), I’m told I will get 3 hours and 50 minutes from a full battery, and an hour later, sure enough, I’m down to 47 percent and 2 hours and 39 minutes away from needing the charger. I’ll keep it simple: this is unacceptable. LG has thrown all this effort and investment into creating the leanest and most portable 14-inch laptop that it can, and then it rendered it meaningless by forgetting to put a real battery inside the Gram. My confidence period for being able to use this laptop as a laptop stretches to 2 hours. If I have to do something that requires 121 minutes or more, I’d have to bring the charger with me. Contrast that with the MacBook Air, which can extend as far as 10 hours on a single charge when required.

Adding insult to short-battery-life injury, plugging in the charger and a set of headphones at the same time leads to a nasty surprise in the form of ambient electric buzzing. LG proudly notes that it has a Wolfson DAC (digital-to-analog converter) for "Hi-Fi quality sound" built into the Gram, but that just makes it all the less forgivable that it would overlook this obvious annoyance. 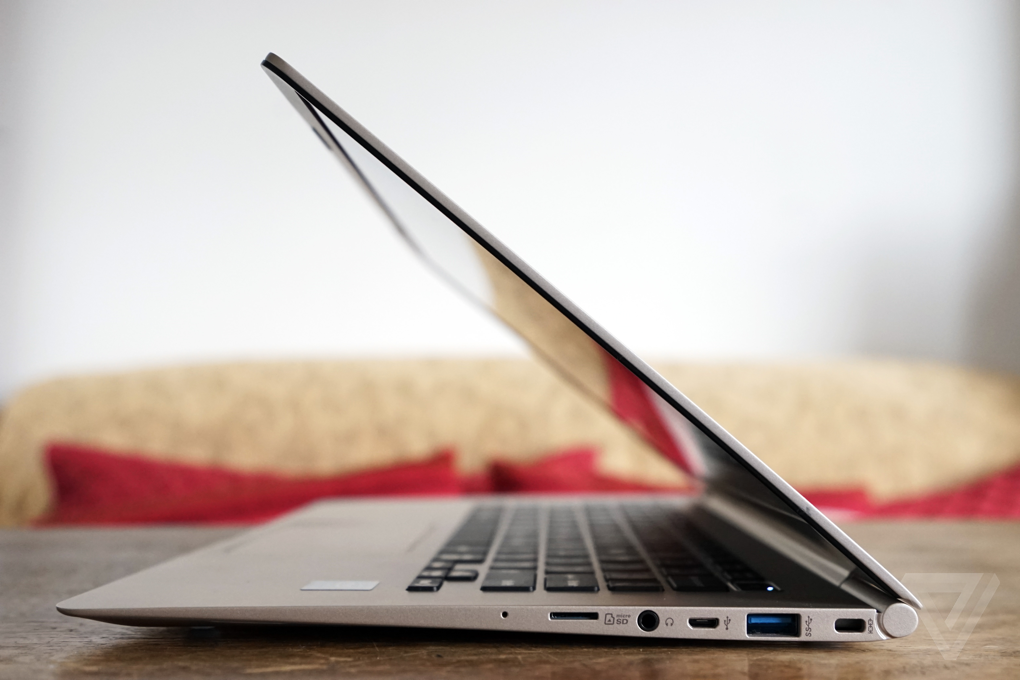 The LG Gram is the very definition of a contradiction. It has been designed to set a new benchmark in portability for laptops with larger screens, but it’s sacrificed the thing that makes any electronic device portable: its battery life. There’s no way for me to recommend this as a laptop, especially not at the $1,399.99 price of the Core i7 model with 256GB of storage. If battery life doesn’t matter to you, you could build a formidable computing and gaming rig for half that price, or if you want a compact laptop that has most of the good things about the Gram, Dell’s XPS 13 starts at $799 and now includes Skylake processor options. Or you could buy half a dozen Chromebooks.

I really wanted the Gram to be a sign of change from LG. This is the company’s first major foray into the competitive US laptop market, which is as good a time as any for it to step its game up and deliver a comprehensively awesome product. Instead, the LG Gram is classic LG, featuring a great display and clever engineering, but also a derivative design and uninspiring construction. Like Dr. Frankenstein, LG has created a thing just to prove that it can.