All devices lead to this

Universal remote controls are a bizarre product category, because they solve a legitimate and substantial problem — the proliferation of really terrible remotes on your coffee table, one for each device in your living room — yet, for some reason, they’re pretty rare. Unless a consulting firm is coming into your multimillion-dollar home and setting up $50,000 worth of home automation equipment, the only serious contender that you’ll likely encounter in your shopping is Harmony, which was in the business long before Logitech acquired them several years ago. If there was a lobbying body informally known as “Big Remote,” Harmony would be its only member.

I don’t know why there isn’t more competition in this space, but the good news is that Harmony remotes are pretty decent: with very few exceptions, they can completely eliminate your pile of garbage clickers and replace it with a single, elegant unit.

That brings me to the $349 Harmony Elite, Logitech’s new top-of-the-line universal remote that I’ve had the chance to test for a couple weeks in my apartment. Let’s start with the basics: the core of the bundle is a big, weighty stick with a capacitive touchscreen at the top and a fairly standard assortment of physical remote buttons underneath. Recharging comes from an included dock that you’ll want to set up on a table near your living room seating. And finally, there’s the Hub, a river rock-shaped box about the same size as a Roku or Apple TV. 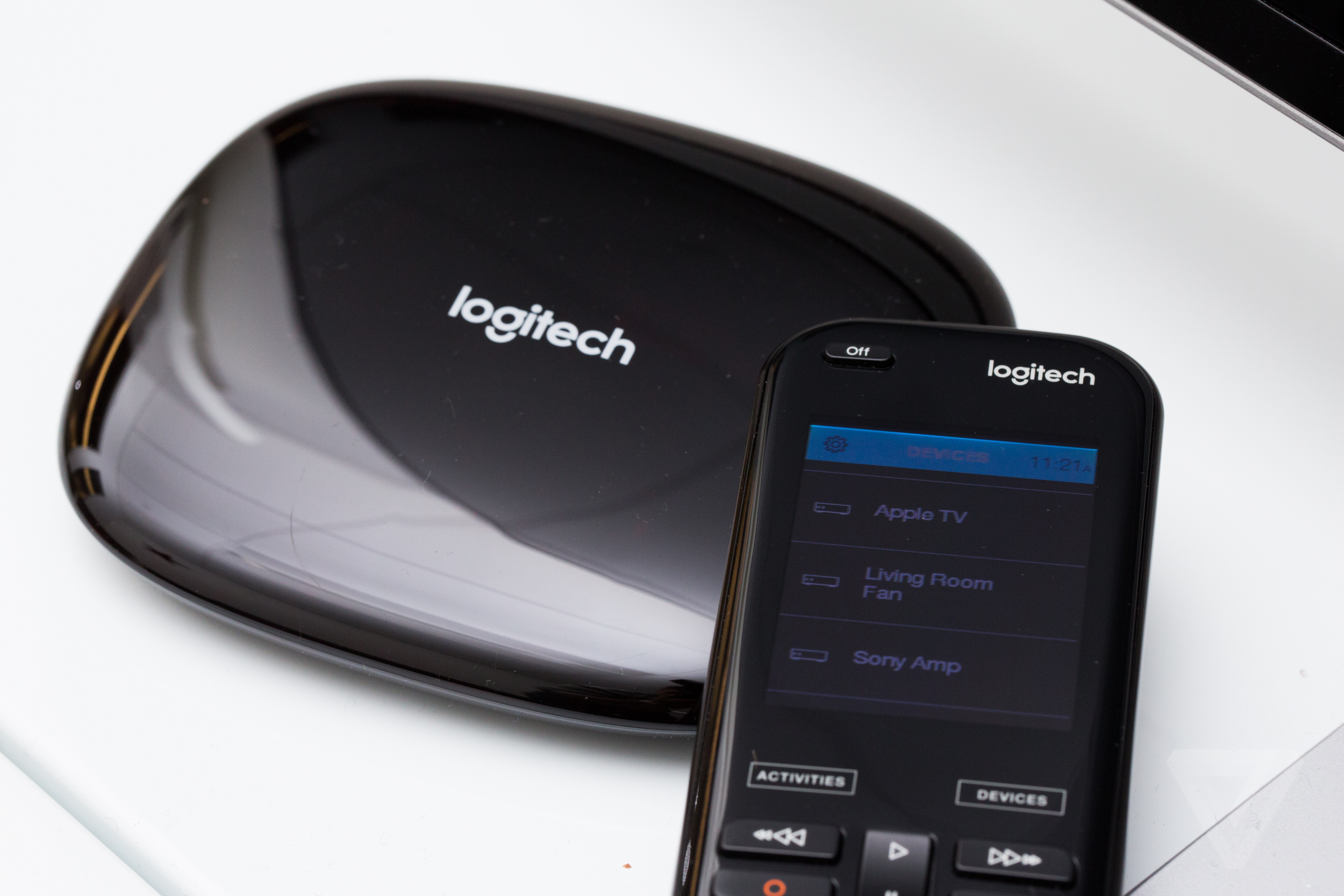 I know what you’re thinking, because I’ve been there before myself — this already sounds too complicated. But the Hub is a pretty killer sidekick to the remote: it functions as an IR blaster and can control two additional wired remote IR blasters, it connects to your home Wi-Fi, it has support for home automation protocols so you can control smart bulbs, sockets, thermostats, and the like, and it communicates with the remote via RF. This last bit is critical: the remote in your hand doesn’t need line of sight to any of your devices, as long as the Hub or one of its remote IR blasters does. This means you can change volume from another room and hide your ugly set-top boxes in a cabinet. (Yes, the remote still has an IR window of its own, but you may find that you never need to use it.)

Adding devices sounds like a pain, but it’s not

Once you drop the Hub somewhere in your A/V rack and connect one or both of the remote IR blasters as necessary, you’re ready for the setup phase. This used to be every Harmony owner’s dread: Logitech has relied on a truly God-awful downloadable Windows / Mac app based on Silverlight (yes, Silverlight) for as long as I can remember. Using it is like punching yourself in the face. Happily, that dumpster fire of an app seems to be history, as you can now take care of the remote’s setup using the much more tolerable Harmony app on iOS or Android.

Dropping the remote in the charging dock will cause the screen to illuminate, telling you to fire up that mobile Harmony app. From here, you’ll press a pairing button on the back of the Hub, choose a Wi-Fi network for the Hub to permanently connect to, and you’re off to the races. The fundamental paradigm of programming a Harmony remote is the same as always: first you add your devices — your TV, amp, cable box, Roku, PlayStation, and so on — then you use those devices to create "activities" like "Watch TV," "Watch Netflix," "Play a game," and the like. You can call the activities whatever you want, choose icons for them, and exact granular control over the functions of every button on the remote, but most activities have a default setup that works pretty well.

Adding devices sounds like a pain, but it’s not, because Harmony’s crown jewel is its hilariously large database of remote-controllable devices. I added my obscure $19 HDMI switcher made by a generic brand I’d never heard of, and sure enough, it was already in there. There’s an IR sensor on the Harmony Elite’s underside if you run into a device that you need to manually "learn," but I would be shocked if you ever have to do this. 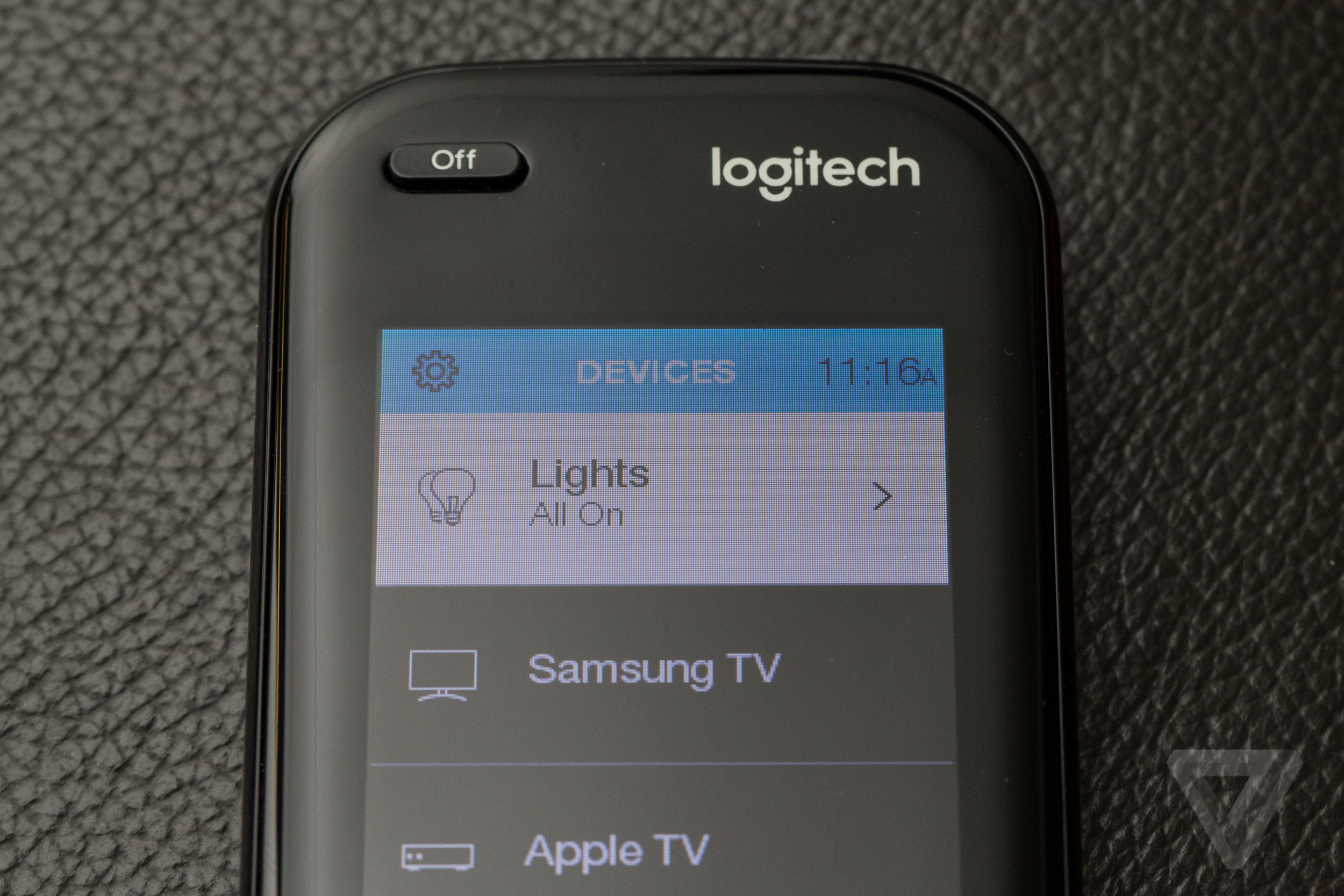 One hitch is the small but important list of products that have Bluetooth remotes and no IR windows, like the PS4 and Wii U. The Elite can control these, with some restrictions — Sony doesn’t permit third-party devices to toggle power on the PS4, for instance, which is a bummer. There’s also an open question about the upcoming version of the Apple TV, which has a much fancier remote; it’s possible you’ll want to continue to use it even if you have something like a Harmony, since it offers voice control and a touchpad. (Amazon’s Fire TV offers voice control, too.) The Elite, for all its capability, will definitely never have voice control, and I can’t imagine the touchscreen would ever be compatible either.

Once all your devices are set up, you’re ready to go into full-on couch potato mode. The magic of a Harmony remote is less the ability to control multiple devices (any old $20 universal remote can do that) and more the "activity" concept I mentioned earlier: each activity can turn multiple devices on (or off), configure them appropriately, and customize both the remote’s buttons and the touchscreen to the needs of that activity. There are even four color buttons (red, green, yellow, and blue) that you can map to the equivalent color buttons on, say, a TiVo or an Xbox One.

The Elite is an unqualified improvement in basically every way

Having owned the Harmony Elite’s last two generations of predecessors — the Harmony Ultimate and the Harmony One before that — I can say that the Elite is an unqualified improvement in basically every way. The Ultimate had made some weird design decisions, none stranger than moving the transport buttons (Play, Pause, FF, Rewind, and so on) above the touchscreen, so you had to do some index finger gymnastics basically every time you used the television. It seems that Logitech heard the complaints from Ultimate owners, because that’s fixed — the only button above the touchscreen is Power Off — and they’ve returned to a replaceable battery, just like the Harmony One. (Harmony remotes have a reputation for going through rechargeable batteries, perhaps because they’re left on charge in their docks for 90 percent of the time.)

The Elite is also considerably larger than the remote it replaces; in that regard it’s again like the One, which was a pretty big clicker. But that’s where the similarities end: the Elite is a thoroughly better-looking device with a more understated design and considerably more capability. Keeping pace with Logitech’s push into home automation, the Elite has four physical buttons for smart bulb and socket control, anchored in the center by a dimmer rocker. If you have something like Philips Hue in your home, you can program these buttons to turn groups of lights on with a short press and off with a long press (for instance, I have one button set to control three Hue bulbs in my living room, and another set to control one Hue bulb, one Bloom, and one Lightstrip in my bedroom). Unfortunately, Harmony still hasn’t enabled full color control for Hue — you can only adjust color temperature — but unless you’re trying to configure a rave with the remote, it should be sufficient. 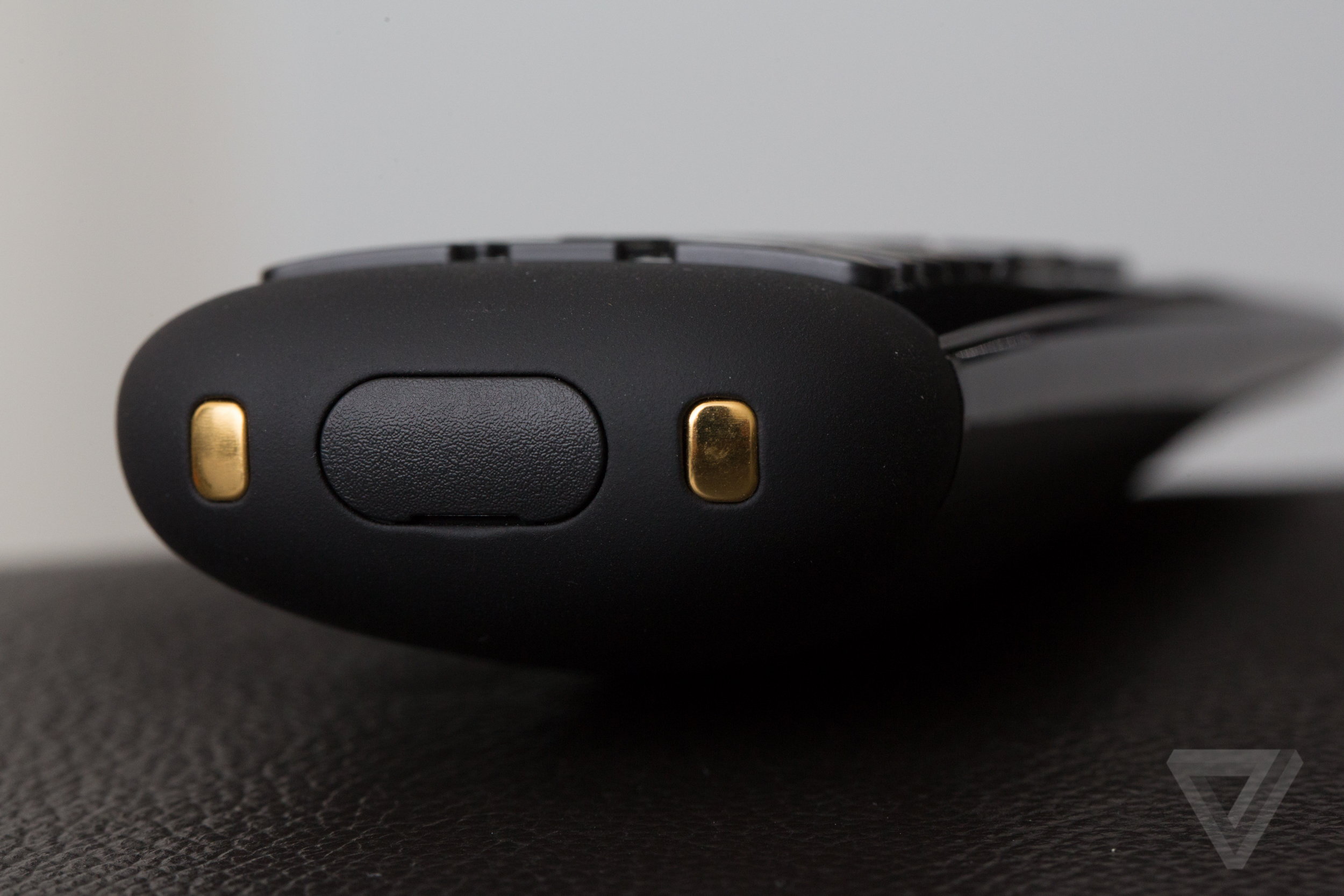 And let’s talk about that display. If you have… well, basically any smartphone made in the past five years, you will be underwhelmed by the quality of the Elite’s LCD, but it’s plenty good enough to get the job done. It’s definitely more responsive than the displays on either the One or the Ultimate, but I’m not sure if that’s the touch sensitivity or a faster processor at play. There’s also a mildly revised UI here, but it’s basically the same as the old one; different colors, different typefaces, but same operating mechanics. I’ve long lamented that Harmony remotes have dumb animated transitions between displays and menus, always hoping they’d be removed (or at least configurable) with a firmware update — sadly, they’re still here, but they seem to move just a little bit faster. Progress!

One other change from the Harmony Ultimate worth talking about is the touch-sensitive area adjacent to the display. On the Ultimate, two icons here offered shortcuts to the Activities menu and favorite channels. On the Elite, the Activities shortcut remains, but the other one now goes to a list of devices in case you want to control a box or light bulb individually instead of as part of an activity. I miss the favorite channel shortcut, but I understand why Logitech nixed it: channels are losing relevance in an age of non-linear TV, so devoting a permanent shortcut to it perhaps seems a little silly.

So, should you buy the Elite? I’m a firm believer that this is the single best universal remote you can buy without spending thousands of dollars on professionally installed rich people stuff — and even then, it might still be better! — but it’s also an extraordinarily incremental product. If you currently own a Harmony Ultimate or Ultimate Home, you basically have all of the Elite’s capability already. This is nicer hardware, but probably not $349 nicer. If you’ve got a Harmony One or earlier, I can say that you’ll feel right at home with the Elite, and you’ll instantly notice a substantial improvement. And if you don’t own a good universal remote at all, do a quick count: do you see four or more remotes on or around your couch right now? Yes? Just buy this thing and thank me later.

$294.99 at Amazon
How we rate and review products
Most Popular
From our sponsor
Advertiser Content From