The new SL is a big, meaty camera designed for pros

Scan the sidelines at any sporting event and you'll start to notice patterns. Athletes warming themselves up mentally and physically, coaches trying to get the most out of their players, or perhaps cheerleaders trying to engage the crowd. You also might notice the sidelines dotted with photographers that have big camera rigs around their necks and long, white lenses dangling from their hips. Invariably, those photographers are using Canon's top-of-the-line 1D camera with long and fast Canon lenses to do their jobs. They are using those cameras because they can rapidly autofocus and bang out many high-quality images per second — a necessity when photographing professional sports.

Leica, a company better known for its compact and travel-friendly (and expensive) rangefinders, has never really competed in this level of professional photography. But its new camera, announced today, is designed specifically to cater to this very demanding crowd. The Leica SL is a full-frame mirrorless camera that can shoot 11 frames per second at its full 24-megapixel resolution. Leica also says it has the "world's fastest autofocus" of any camera, mirrorless or otherwise. If you're going to get those pro photographers to ditch their Canons, that's one way to get their attention. 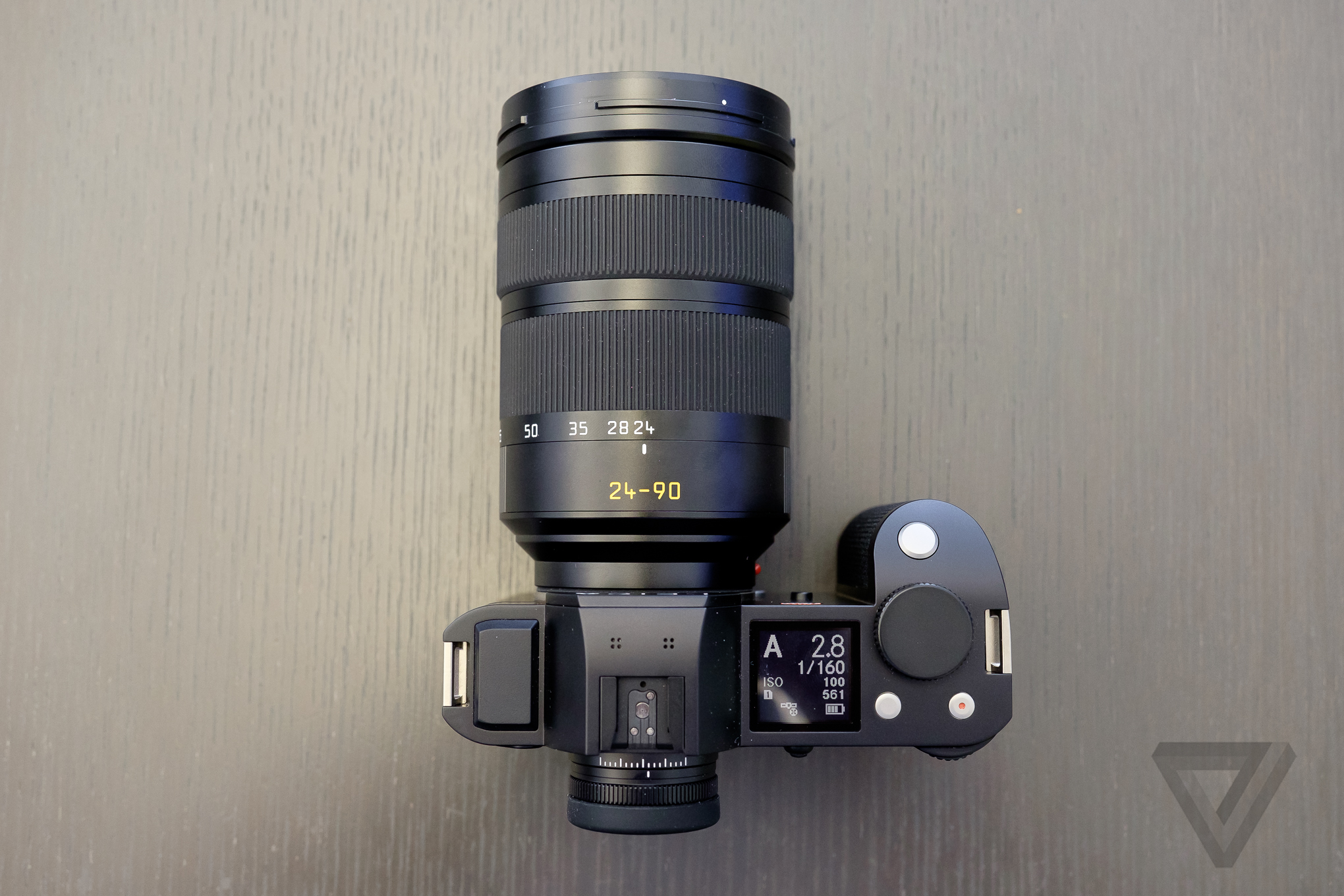 Though consumer-level mirrorless cameras are often associated with compact size and lightweight bodies, the SL is anything but. It's huge and heavy, weighing nearly two pounds before you even put a lens on it. This is not a camera that you can easily toss into a shoulder bag, but its size and heft remind you that this is a tool designed for pros. The SL is milled from aluminum and feels appropriately solid throughout. Leica also claims that it is dust and weather proofed — another necessity for pros in the field.

Speed and performance are name of the game with the SL

Leica says it developed an entirely new electronic viewfinder for the SL that has a resolution of 4.4 million pixels and comparable magnification to a medium format camera. It's a larger and higher-resolution viewfinder than found on any other mirrorless camera, and in the brief time I had to demo the camera, I was consistently impressed with it.

To get pros on board with your new camera, you're going to need a variety of lenses, and that might be the biggest weak spot for the SL. At launch, Leica is offering a 24-90 f/2.8-4 zoom lens, complete with optical image stabilization. It will be followed up with a 90-280 f/2.8-4 telephoto zoom, also with image stabilization, and then a 50mm f/1.4 prime lens. Leica will also offer adapters for T-, S-, M-, and R-system lenses, allowing photographers to use virtually any Leica lens ever produced on the SL body. But it still feels like the lens options will be a big roadblock for a number of photographers.

I was able to spend a couple of days using the Leica SL before its official announcement, and though I didn't really have the time or opportunity to put all of Leica's claims to the test, I couldn't help but be impressed by the imposing SL. It's exceptionally fast when taking photos, and image output is unsurprisingly fantastic. My only complaints are with the lack of descriptions on the camera's controls. Leica did this intentionally because everything can be customized, but it's pretty daunting and confusing when you first pick up the camera.

Leica says the SL will be available for purchase along with the 24-90 lens starting on November 16th. The body will be priced at $7,450, while the lens will cost $4,950. Both prices aren't cheap, and anyone who is familiar with Leica won't be surprised by them. Interestingly, the price for the body is right in line with the Canon 1D and Nikon D4 that Leica is hoping to compete with, so pro photographers might not be scared away either. Whether or not they bite remains to be seen.