For three years, Microsoft has been trying to convince us that a tablet can replace our laptops. Throughout three major design iterations, that’s been the driving message behind the Surface. Last year’s Surface Pro 3 represented the best execution on that idea yet. It showed that if you were willing to make some compromises, you could certainly have a tablet device that replaces your laptop in many ways. (It also has spawned a litany of copycat designs from HP, Dell, Lenovo, and others. Even Apple is about to get into the pro tablet fray.)

This year, Microsoft is putting that fight behind it. It’s no longer trying to sell the idea that a tablet can replace your laptop. If you want a true laptop, Microsoft is now more than happy to sell you one.

So the Surface Pro 4 is different. Not in the ways you might think — it’s shockingly similar to the Surface Pro 3 in design, appearance, and functionality. Rather, the Surface Pro 4 casts aside the burden of being Microsoft’s lone vision for personal computing, and now it can just be the best Surface it can be.

This isn’t the Surface that will convince you a tablet is better than your laptop. This is the Surface for the people that are already convinced. 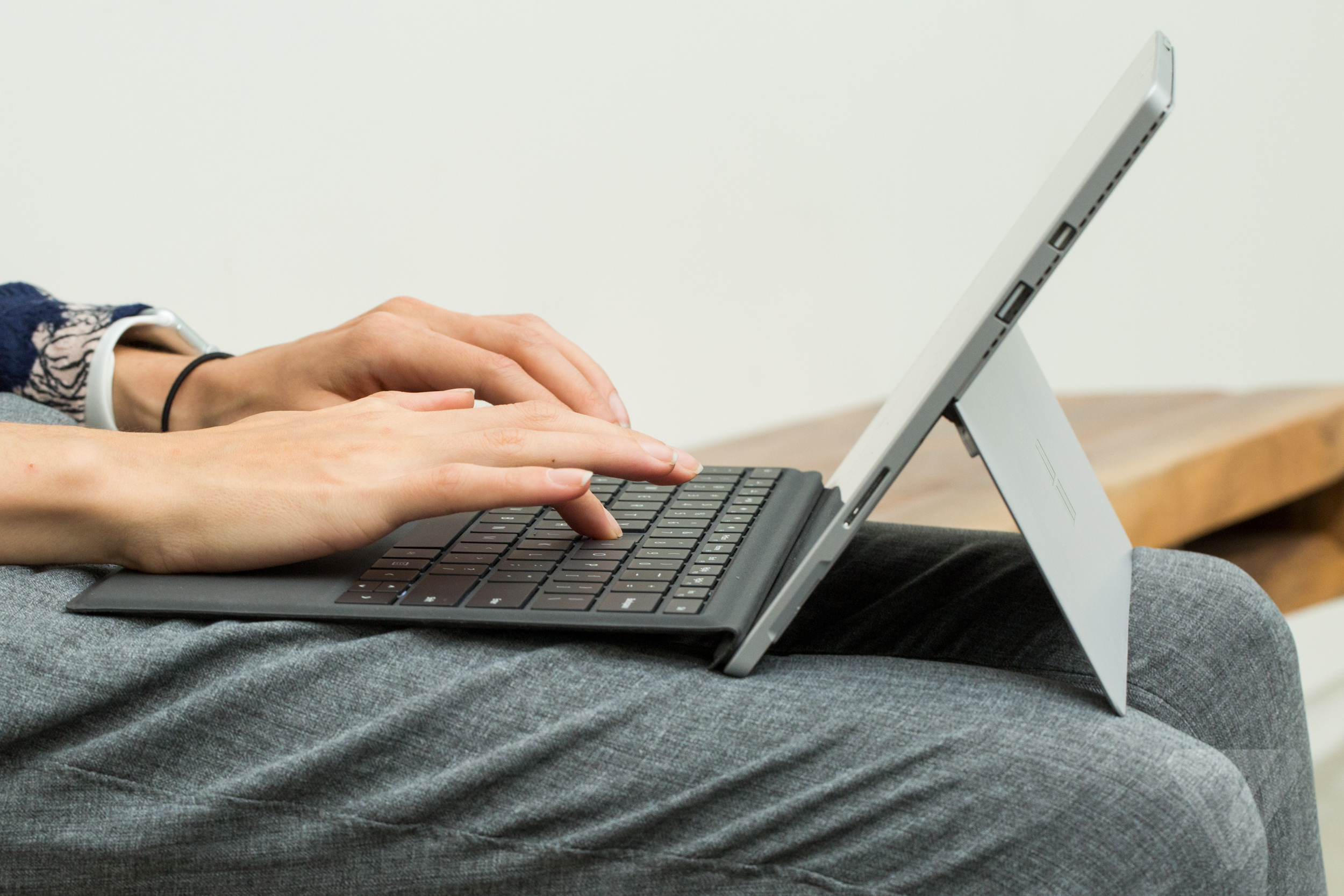 The Surface Pro 4 is so similar in appearance and design to last year’s Surface Pro 3 that only the most trained eye could distinguish them. It has the same overall shape and footprint, from its infinitely adjustable kickstand to its warm grey magnesium finish. It’s a familiar and signature look, and using it two generations in a row establishes both a brand and visual identity for Microsoft’s computers.

The hardware changes are minor, but welcome

There are some hardware tweaks, but you have to really hunt to find them. The Pro 4 is imperceptibly lighter than the 3, ever so slightly thinner, and has a slightly larger display. (The overall height and width of the tablet itself remain the same thanks to smaller bezels around that display.) It’s still very much a full-featured Windows 10 PC in a light and portable package. It also still works much better on your desk than on your lap or an airplane tray table. (I’m tempted to liken the Pro 3 and the Pro 4 to the iPhone 6 and iPhone 6S; yes, there are differences between them when you compare a spec sheet, but in practical use, they are the same experience.)

Just because the Surface Pro 4 doesn’t look or feel much different than the Pro 3 doesn’t mean Microsoft has been sitting back doing nothing for the past 18 months. Instead of going back to the design drawing board, Microsoft focused on improving how you actually interact with the Surface. 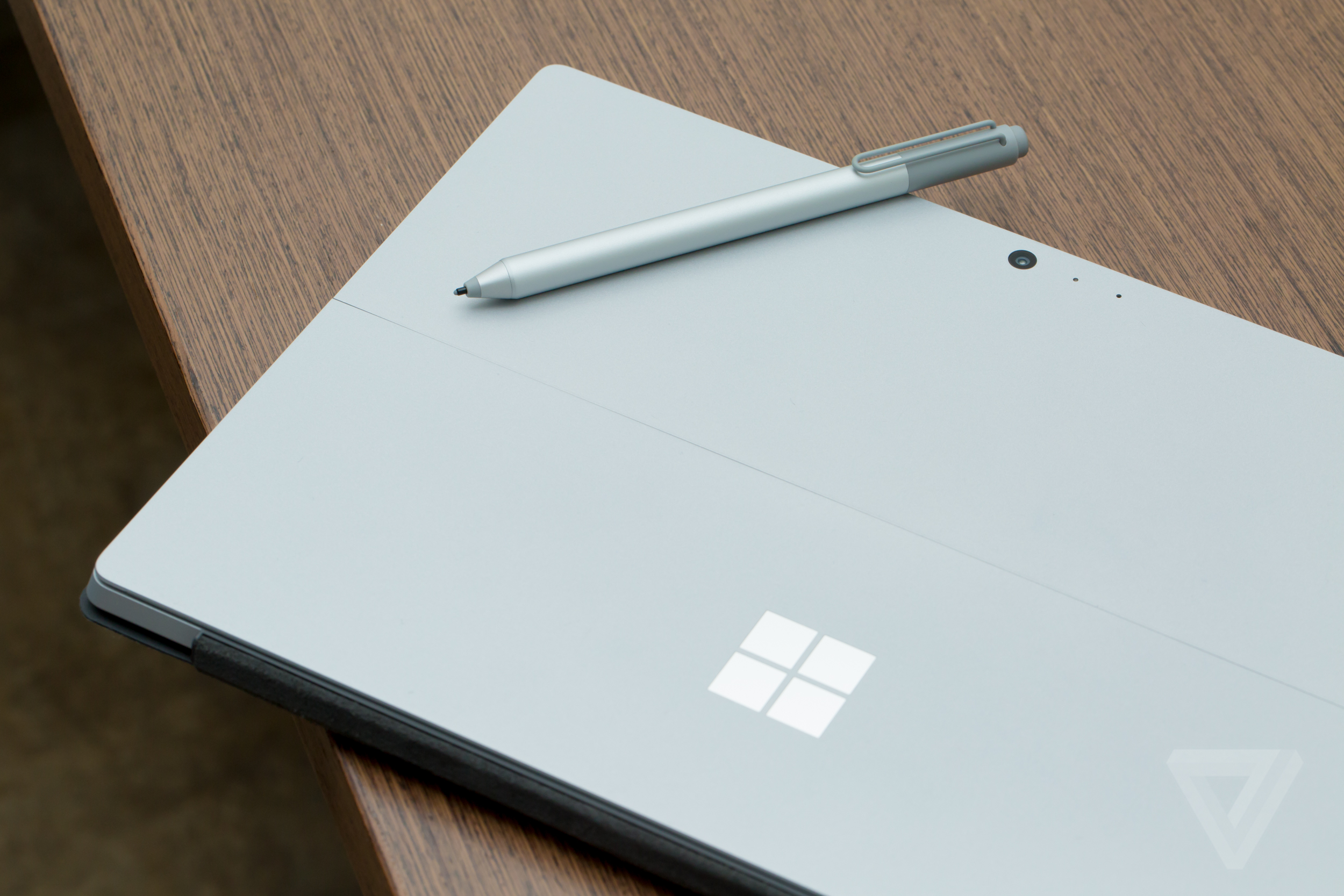 The biggest improvement comes with the new Type Cover, which, sadly, still isn’t included with the Surface and requires you to spend another $130 to get it. But if you buy a Surface Pro 4, you’ll definitely want to budget for the Type Cover. It has completely redesigned keys and a brand-new trackpad that Microsoft says is 40 percent larger than before. The keys are raised and separated, like you'd find on a standard laptop keyboard, and are much better to type on than the flat, condensed keys of earlier Type Covers. They have nice travel and really aren’t bad, but they still don’t provide the same experience as a true laptop keyboard. There’s also that weird hollow sound when you hammer on them because the keyboard is actually lifted up off the surface of your desk or table. 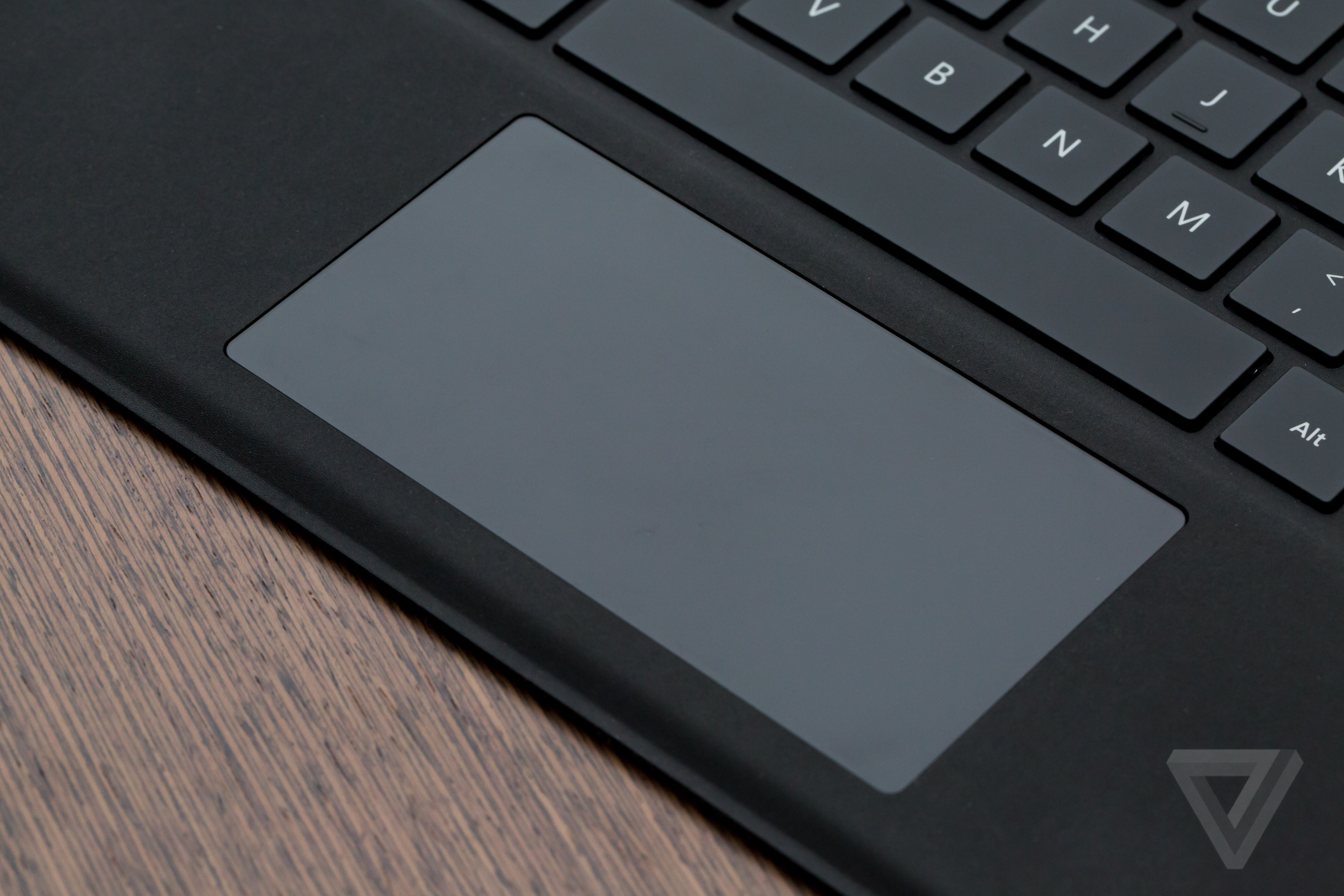 The trackpad on older Type Covers has always been a miserable experience: too small, not smooth, and just plain frustrating to use. The new one is much better: it’s fast and smooth to scroll with, and the larger size makes it much easier to do all of those cool Windows 10 multi-finger gestures. Compared to the trackpad on any Mac laptop or even Microsoft’s Surface Book, however, it’s still very small, and navigating around with it feels very cramped. Fortunately, the Pro 4’s display is still a touchscreen, and I found myself reaching up from the keys to touch something on the screen much more often than reaching back to the trackpad.

And then there’s Microsoft’s brand new Surface Pen, which provides yet another way to interact with the computer (and is actually included in the box with the Pro 4, unlike the Type Cover). The Pen works with new technology in the Pro 4’s display to provide a better writing experience than the older version. It’s pressure sensitive (1,024 levels, to be exact), has a really great drag on the screen, and feels more like writing with a real pen than ever before. I’m no artist, and it still may not work for demanding sketchers, but I like it a lot for discretely taking notes. The other cool thing about the Pen is that it now includes an eraser on its top side that lets you quickly erase whatever it is you just wrote or scribbled. It’s very easy and natural to use. The Pen will also now magnetically snap to the side of the Pro 4, which is great for storing it while the computer is on your desk, but terrible when you toss the Pro 4 in a bag and the pen pops off and settles to the bottom with all of the old gum wrappers, lint, and other detritus. 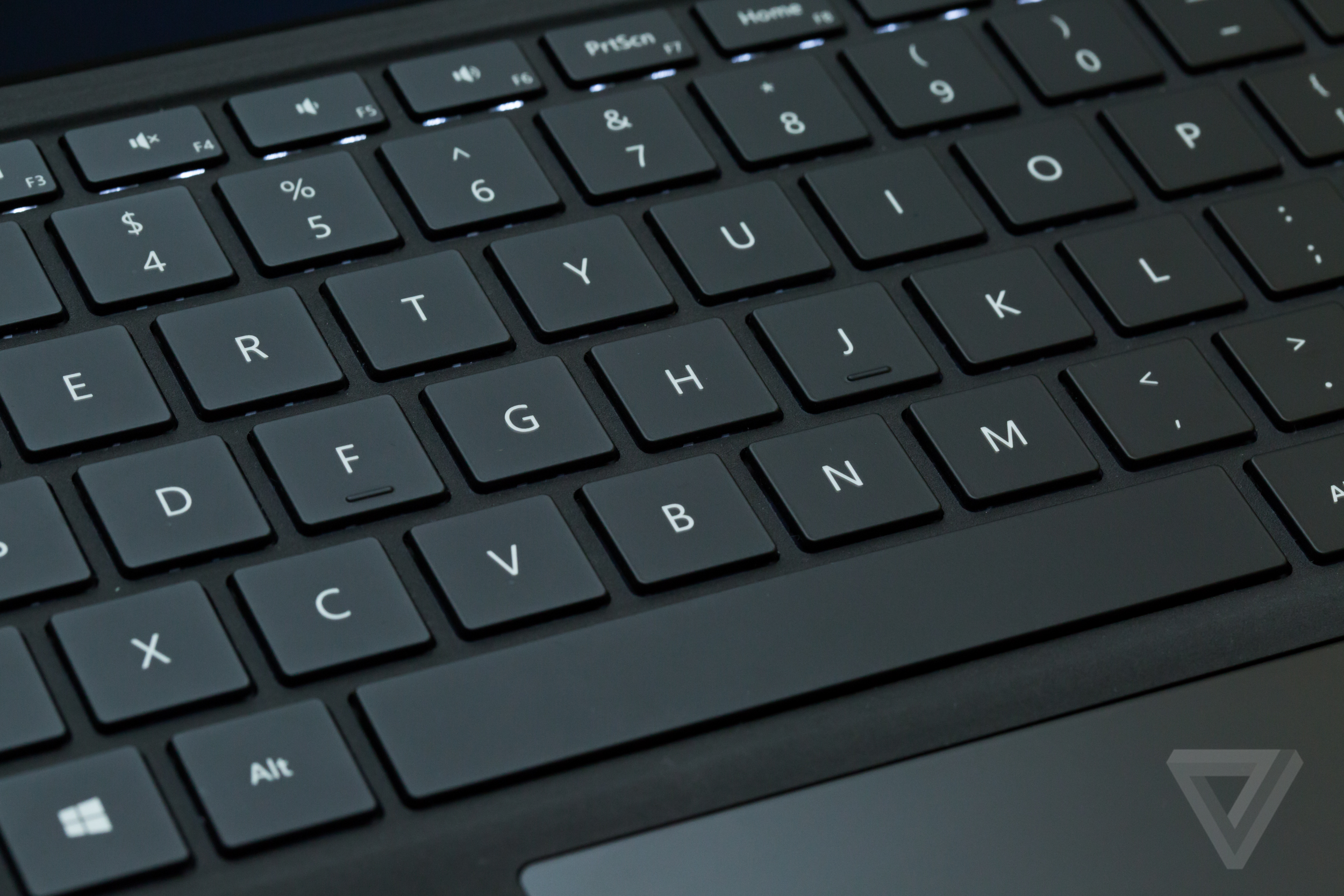 All of those improvements go toward making the Surface Pro 4 experience better, but they don’t address the compromises you have to make when you choose a Surface instead of a more traditional laptop. The Pro 4’s design is very compact and eminently portable, but it’s still awkward to use on my lap, whether I’m sitting on a chair or sitting on the floor. It’s also difficult to use on a cramped airplane tray table thanks to its unusually long footprint. And it can’t be picked up from a desk with one hand when it’s open (like you can with a laptop) as the attached keyboard will just flop around awkwardly until you close it. None of these things are new or different with the Pro 4, but they are all things to keep in mind if you’re considering a Surface.

The Pro 4 doesn't address the compromises in this design

The Pro 4 is also just as awkward to use in tablet mode as the Pro 3, and though Windows 10 lets you switch between desktop and tablet mode easily, I found myself leaving it in desktop mode with windowed apps most of the time. It’s an old story, but true tablet apps are still lacking for Windows, and many of the apps I use on the platform are designed for the desktop environment. There’s also the fact that though it’s lighter and thinner than the Pro 3, at 1.73lbs, the Pro 4 is still a big device and not something that can easily be held up in one hand for extended periods. While I may use an iPad to do a lot of reading during my commute, the Pro 4 doesn’t really work that well for that purpose. 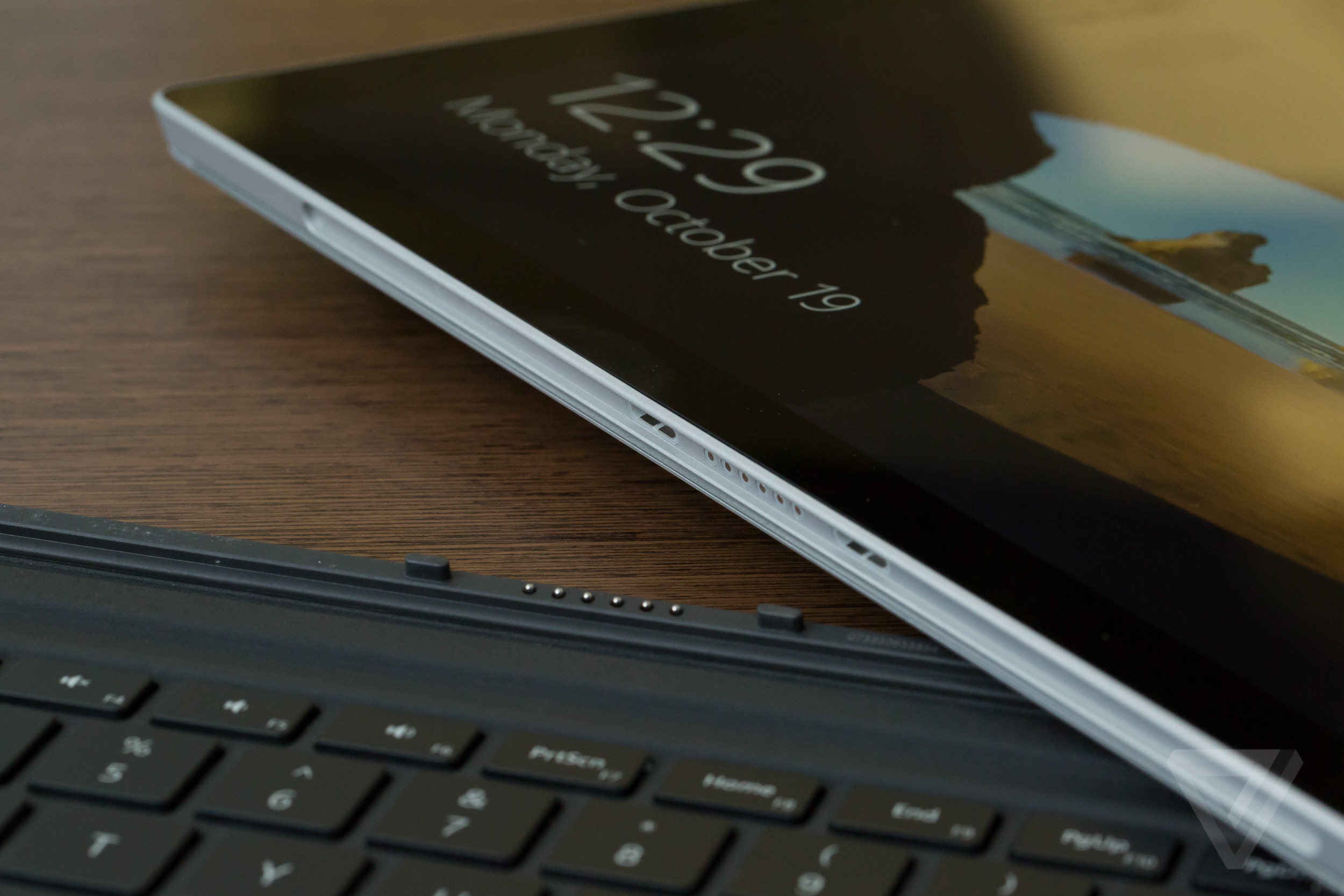 Inside, the Pro 4 has gotten the usual processor spec bump, including sixth-generation Intel Core chips. The base model, which is priced at $899, has a Core M chip (similar to, but newer than the one in Apple’s MacBook) and 4GB of RAM, while more expensive versions can be specced out with Core i5 or Core i7 processors and up to 16GB of RAM. The unit I’ve been testing is priced at $1,299 and has a Core i5 processor, 8GB of RAM, and a 256GB SSD. If you really want something that can work as a laptop replacement, you’re probably going to want to pony up for at least this model.

I haven’t had any performance issues when using the Pro 4 in my daily work, which consists of a lot of web browsing, Twitter, Slack, and email, with the occasional photo editing. Windows 10 is swift and snappy, and there hasn’t been a point where I’ve really felt like I’ve maxed out the machine’s limits. (To be fair, I’ve used the Surface Pro 3 quite a bit, and I haven’t noticed a big a performance difference between the two in real-world use.)

Performance and battery life are similar to the Pro 3

Battery life in normal use has been on par with the Pro 3 as well, lasting me about 5 hours or so between charges. The Pro 4 went for 6 hours and 37 minutes in our rundown test, which is about an hour less than the Pro 3 managed. Neither is what I’ve come to expect from a premium laptop, and the Pro 4 still lags in this area. I still adore the Pro 4’s tiny little charging brick, which also gives me a USB port to charge my always-thirsty smartphone.

Windows 10, which is now available for every Surface save for the ill-fated and oft-forgotten Surface RT, works well on the Pro 4, though it still feels like a work in progress. Since Windows 10 launched earlier this summer, Microsoft has been fixing a lot of bugs and issues, but there are still a number that crop up in my daily workflow. For example, the standard Mail and Calendar apps continue to have trouble syncing with my Google Apps account, and the Microsoft Store often crashes. These are rather specific bugs, and I wouldn’t consider either of them show stoppers, but I’d be remiss if I didn’t note them. I’d still rather have Windows 10, bugs and all, than Windows 8.1. 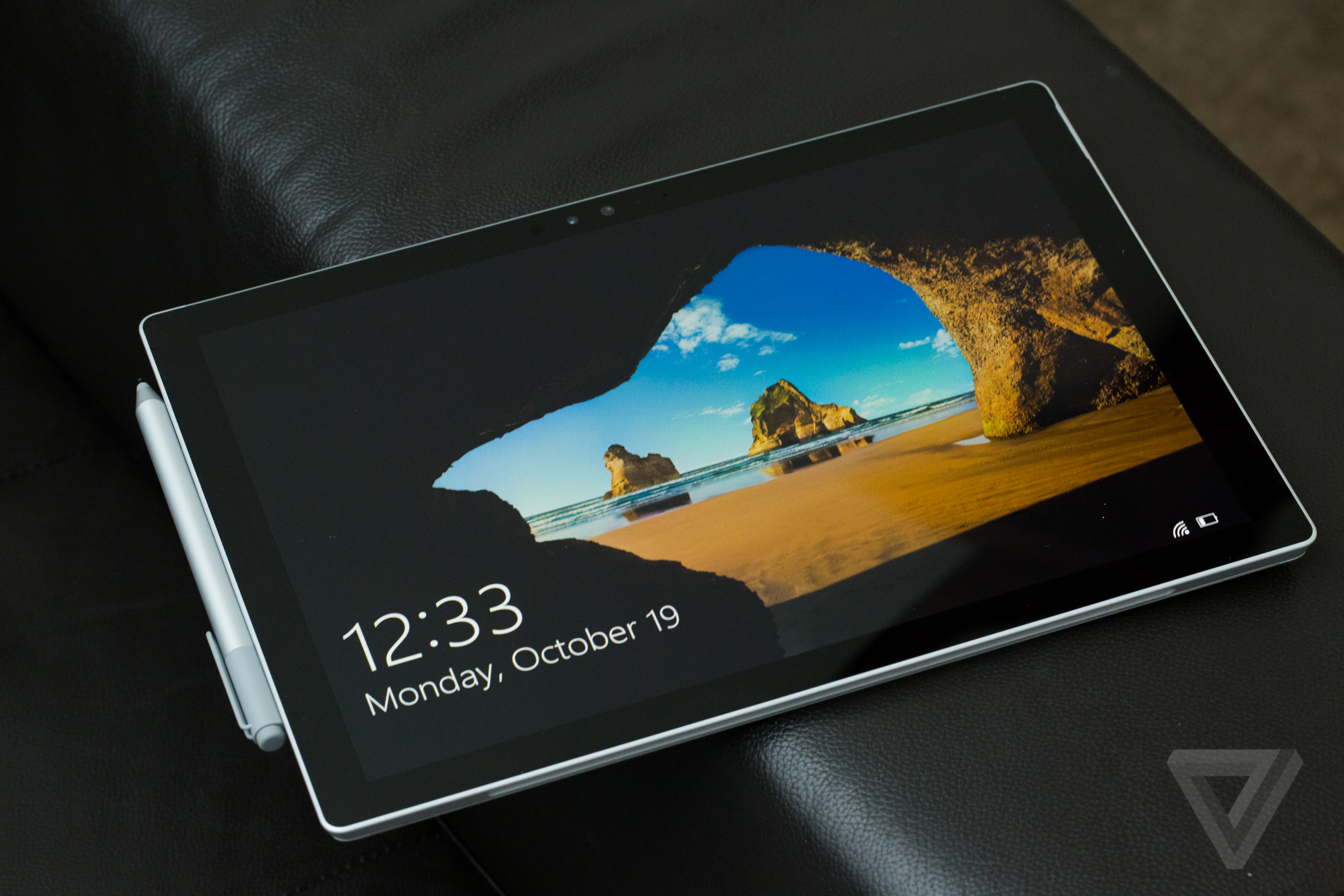 With the Surface Pro 4, Microsoft has hit the refinement stage of its Surface idea. It spent years working out the basics, and now that those are more or less sorted out, it has focused its efforts on improving the experience. The Pro 4 won’t be the machine that wins people over to the Surface camp, and it does nothing to improve the "tablet to replace your laptop" idea.

What it does do is sharpen the Surface’s skills, make life slightly easier for those actually wanting this type of computer, and modernize the Surface lineup with the latest processors from Intel. If the Surface Pro 3 was Microsoft’s best idea for the tablet that can replace your laptop, the Pro 4 is the best execution on that idea.

It’s still not the computer for everyone, but for the Surface believers, it’s the best yet.