Assassin’s Creed is a series that I love and hate in equal measure. The franchise offers some of the most thrilling moments in gaming, letting you scale massive buildings and use stealth to take down enemies undetected. But there’s so much that grounds the experience; boring missions, overly complicated side activities, and stories that straddle the line between dull and nonsensical. I was lured to the franchise by the wonderful second entry, but since then, with a new Assassin’s Creed released every single year, sometimes accompanied by spinoff games, I’ve found my interest waning. After last year’s drab, lifeless, bug-riddled Assassin’s Creed Unity, I started thinking that maybe the series wasn’t for me anymore.

But then I played Assassin’s Creed Syndicate.

There’s no game in the series that represents my mixed feelings quite like Syndicate. Playing through Ubisoft’s rendition of industrial revolution-era London, I was struck by the sheer inventiveness on display; new gadgets made it more fun to zip around the city than ever, and the core assassination missions are absolutely thrilling. This is a game that, in its best moments, is as fun as Assassin’s Creed gets. But, despite plenty of changes, it also doesn’t get away from many of the series’ big problems. It’s a game that you’ll absolutely love one moment, and hate the next, but it’s one that I can’t stop playing regardless.

Syndicate changes the formula in a few important ways. For one, it has two playable characters for the first time, twin assassins Jacob and Evie Frye. Jacob is the now-standard loveable rogue archetype featured in just about every AC game, while Evie is his level-headed counterpart. The two set out to London in order to free the city from an oppressive criminal mastermind, and, like in Grand Theft Auto V, you can swap between the pair at almost any point. Since the two have different styles and plans — Evie is searching for a powerful mystical object, while Jacob forms his own gang to take on their enemies — this means that there are usually multiple story threads from which to choose at any moment.

Outside of the two leads, the other big change is the setting, both in terms of time and location. Syndicate is the most modern Assassin’s Creed yet, and this results in two additions that dramatically change the game. One is a grappling hook-style zip line, which lets you quickly reach far-off areas. Instead of slowly climbing up a building, you can just shoot out a line and zip to the top; it’s especially fun as a means of escape, making you feel like Batman after you pull off an assassination. It’s not the only new way of getting around. Syndicate’s rendition of London is filled with horse-drawn carriages, and you can commandeer one anytime you need, GTA-style. This makes the typically tedious task of getting to far-off locations much, much quicker. The story even squeezes in a few great chase sequences. Both the zipline and vehicles make the game significantly faster, and in turn more fun; you can still traverse the rooftops and climb towers, but having the option to get somewhere quickly is very welcome.

Like Paris before it, London is a beautiful city to explore. The time period feels distinct from any previous AC location, and each borough feels different from the next. You’ll wander through factories and warehouses; grimy smoke stacks dominate the skyline. A dark, foggy London is an ideal setting for pulling off an assassination. There’s even a sight seeing mode, where you can ride a train (which serves as your gang’s headquarters) and watch the world speed by through the window.

In addition to the architecture and vehicles itself, London’s inhabitants are an improvement of the typically milquetoast populace of previous games. Assassin’s Creed games have never been shy when it comes to including historical figures, but Syndicate takes things a step further by including a huge number of them. Alexander Graham Bell will create new gadgets and weapons for you, while Florence Nightingale helps you save the sick and poor. You’ll go ghost hunting with Charles Dickens and save Karl Marx from would-be killers. At one point Charles Darwin helps you blow up a drug lab. It’s ridiculous, but fun, and a welcome change of pace for an often overly serious franchise. 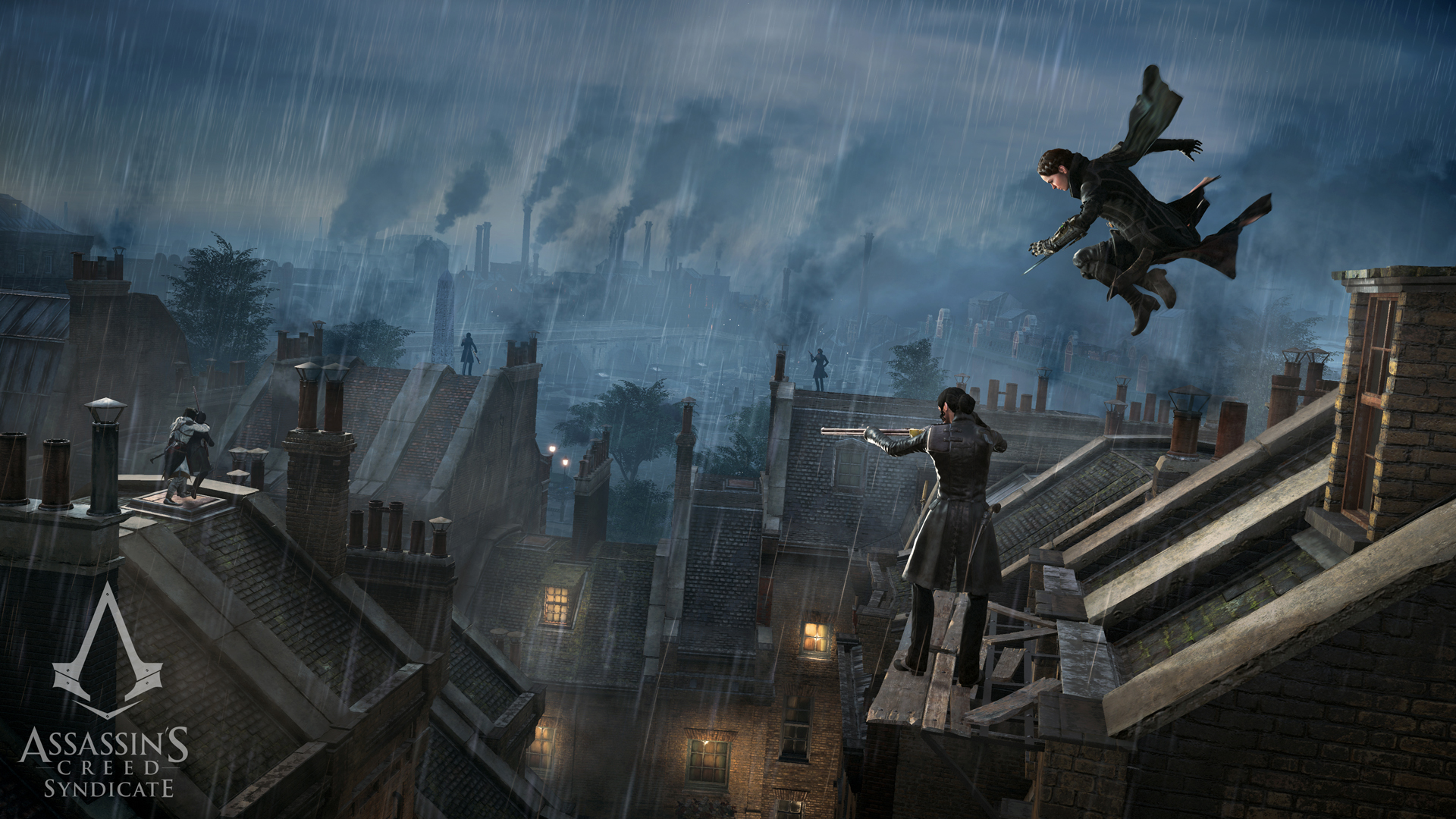 In your quest to take down the criminal network running through London, you’ll have to assassinate several key figures, and these missions are the centerpieces. Each one has the same basic structure: you’re presented with a building filled with guards and multiple ways to reach your target. The balance between tension and excitement is why I play these games; there’s nothing quite like stalking through a huge, complex building, knowing that at any moment you could be discovered. When you finally pull off the kill it’s incredibly satisfying, and Syndicate offers a great deal of flexibility, letting you take multiple paths to the goal.

Overall, though, Syndicate’s missions are very mixed. The assassinations are great, as are some of the side missions — Dickens’ storyline is a particular highlight — but there’s also a lot of tedious filler. You’ll be escorting people through the city, kidnapping others, and far too often you’ll be tailing a fleeing enemy, being careful not to get too close. These missions are especially frustrating because, not only are they frequently boring, but often a single tiny mistake can force you to restart from scratch.

Other frustrations remain. The controls are finicky; it’s easy for your highly skilled assassin to get stuck on a piece of scenery, and the context-specific controls can confuse things. During one escape, I pulled a dead driver out of a buggy so I could flee to safety from the center of a heated battle. Unfortunately, the button used to hop in the cart was the same used for picking up his dead body, so instead of getting away safely, a cop shot me while a corpse was draped around my shoulders. And while the combat is largely more fluid and intuitive than past games, I found myself overwhelmed by huge numbers of bad guys far too many times, leading to awkward, monotonous scrimmages that dragged on and on.

Similarly, while some of the self-contained missions are entertaining and well written, Syndicate’s story isn’t especially compelling. Jacob and Evie feel more like sketches of characters rather than real people, and you never get to know them beyond their surface goals. Their quest to take control of London is convoluted and frequently uninteresting, with twists that seem obvious and villains that don’t inspire much (the modern-day, sci-fi story scenes, though, are mercifully brief). Syndicate is the kind of game where you might know where you need to go and what needs to be done, but you won’t really care why.

What makes Syndicate so frustrating is that these recurring issues undermine what is otherwise the most refreshing Assassin’s Creed game in years. Syndicate is a blast to play during its best moments, and it introduces features that dramatically improve the way an Assassin’s Creed game works. It’s even funny, the rare game that can pull off lighthearted jokes despite primarily being about casual murder. Almost every change is for the better, but the changes don’t go far enough; I spent a lot of time fighting against the same features I hated in past games. Syndicate encapsulates what I love about the franchise, and what I hate, but it also shows that Ubisoft is beginning course correction. Syndicate could just be charting a new course for Assassin’s Creed, but the annual franchise is one titanic ship.

For the first time in a long while, I can’t wait for next year.