Microsoft Band 2 review: An identity crisis on your wrist

Why, exactly, has Microsoft made another fitness tracker?

If you ask Microsoft why the company is making the Band 2, as I have over the past few weeks, you’ll get a variety of answers. Some will say it’s because Microsoft cares about health. That’s a nice yarn to spin, but it’s not the whole answer. Some will say it’s because last year’s Microsoft Band got a good response, and there were more ideas to incorporate. One executive says wearables are another way to extend Microsoft’s platform for app developers. In other words, if you make Windows 10 apps, you’re going to be able to take your code to any device, including the Microsoft Band, and it will run there (eventually).

But after wearing the newest version of Microsoft Band for the past three weeks, I can’t help but think that the real answer is that Microsoft isn't in it for the hardware. Instead, my best guess is that it hopes to get people using the Microsoft Health software — and maybe get some other hardware makers to make stuff for its platform. Despite welcome improvements over last year’s Microsoft Band, this new Band sort of baffles me.

It’s been redesigned, but is only slightly less clunky than before. It’s a fitness tracker, but with the short battery life of a smartwatch. It works with surprisingly great software, but good luck syncing your data to said software. On top of that, it’s more expensive than last year’s Microsoft Band — $249, up from $199 — and more expensive than a lot of other step-counters. The argument there is that it’s not as costly as a smartwatch or a high-powered dedicated fitness watch, but considering that at this point it could be perceived as an also-ran, you’d think Microsoft would aim for a more appealing price point.

It all leaves me wanting to like the Microsoft Band, but I can’t say I’d spend $249 on it. The software is its savior. 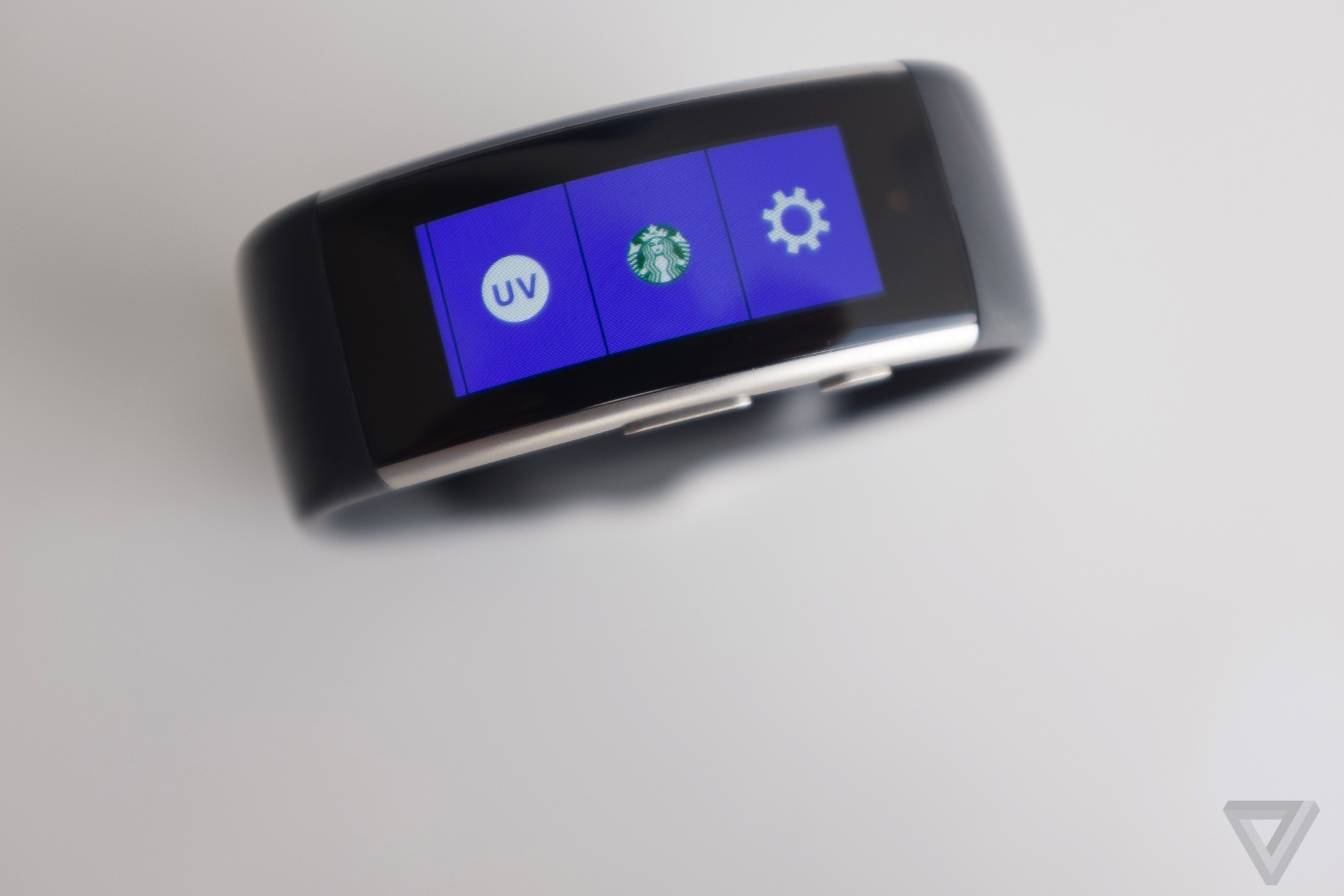 Though the hardware isn’t going to win design awards, it is undoubtedly better than before. Microsoft has ditched the hard edges of last year’s angular Band, going with a smooth, round-edged bangle instead. It has a larger, OLED touchscreen display, coated in Corning Gorilla Glass. It is bright and responsive. The Band’s two physical buttons are uncomplicated; one triggers the backlit display and gives you a glimpse of the time of day, the other starts and stops recording an activity.

It has wrist-based heart rate sensors, skin temperature sensors, and built-in GPS (take that, Apple Watch). It depends on how excited you get about this stuff, but there was something wonderful about going for a long hike or run without my phone and knowing my distance and knowing I had the digital footprint proving I did it.

This year’s Band even includes a sensor for tracking elevation. And it will measure your maximum rate of oxygen consumption (VO2 max), although you’ll have to do a handful of intense cardio workouts before it starts recording this. Fitness buffs go nuts for this kind of thing. 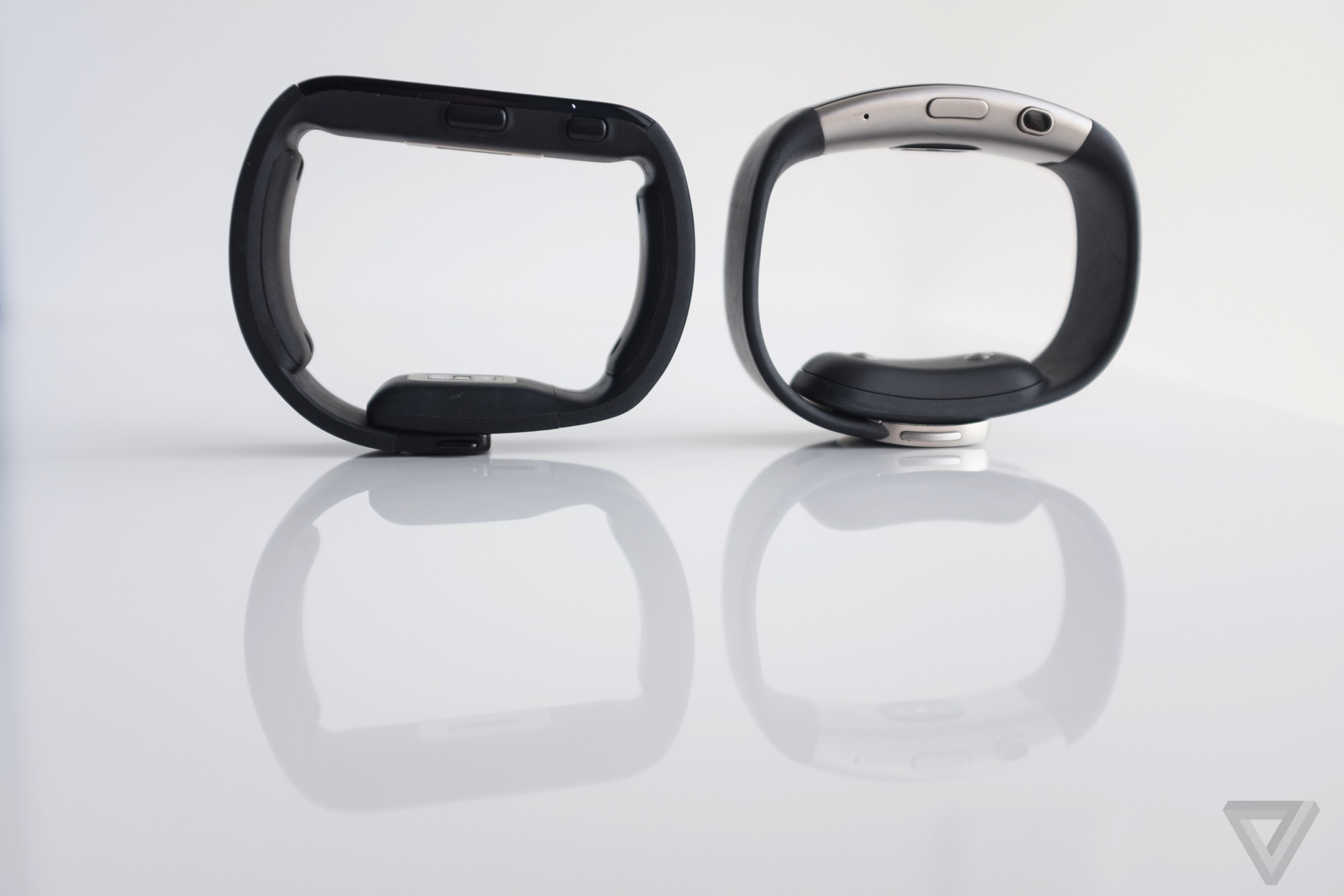 But despite the changes in design and the multitude of sensors, there are a few whiffs. The biggest one is that it’s still unbending and uncomfortable to wear, especially to bed (it tracks sleep as well as exercise). Its battery life is two days at best — less if you exercise consistently and for extended periods. This is better than most smartwatches, but it’s notably less life than other wrist-based fitness trackers, like the Fitbit Surge or the Garmin Vivoactive. I felt like I was always charging the thing. And it requires a proprietary charger (though it’s certainly not the only wrist-dongle that does). Also? You can’t store music on it and use it with Bluetooth headphones. Given that it’s designed to work well without a phone, that’s an odd feature to leave out.

The health software is the best part of this activity tracker

The value of the Band lies in what it ultimately does with all of your data.

First off, the Band tracks everything from running to cycling to golf. There’s a generic exercise "tile" you can tap to record another type of workout, like yoga or weight lifting (though let’s take a moment to note that Microsoft took the trouble to add a golf mode but not a yoga or weightlifting mode). You can load pre-set workouts from brands like Gold’s Gym and Shape magazine onto your band too, and if you’re really ambitious, you can even customize your own workout in advance, something I wish more health and fitness trackers offered. 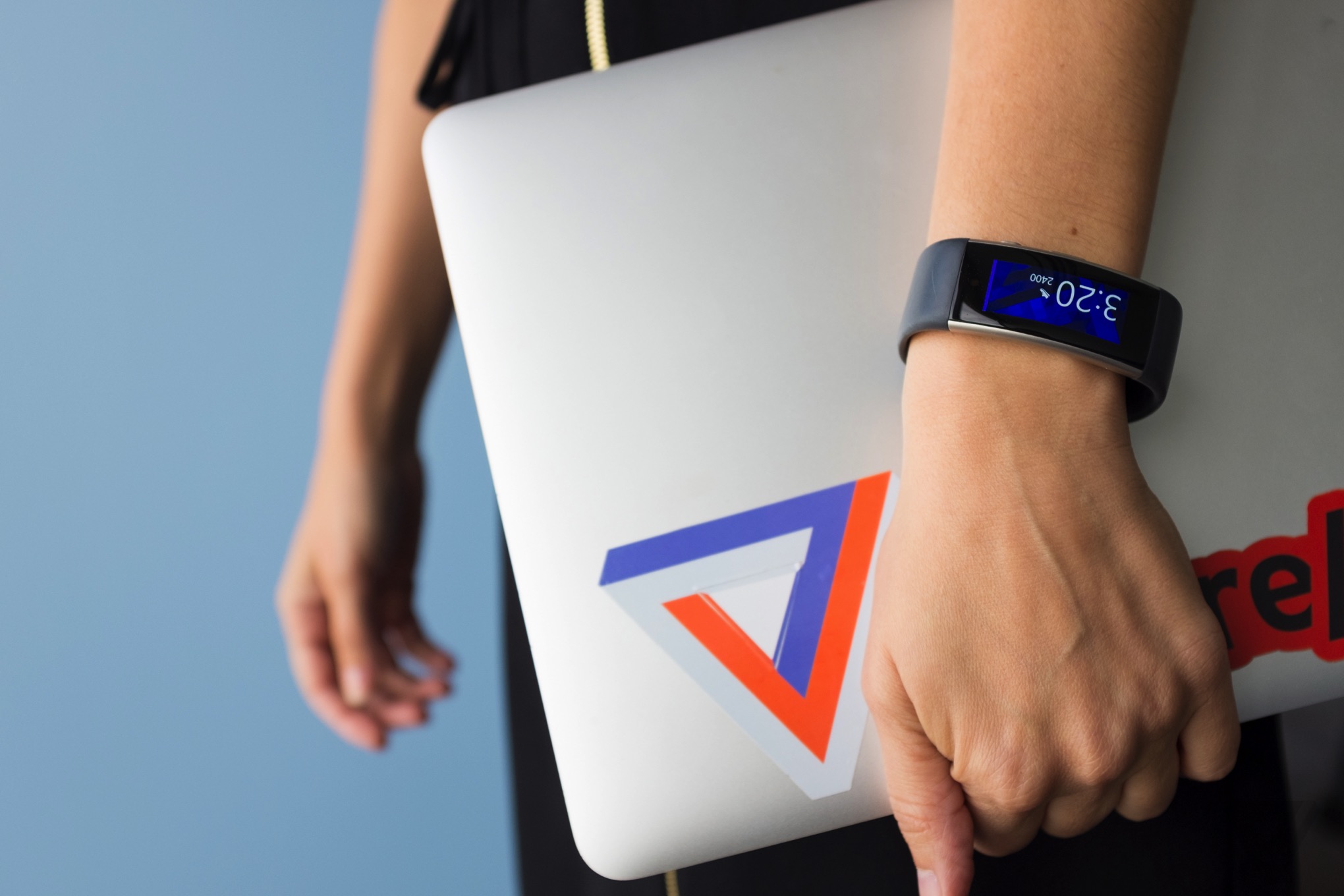 Using Bluetooth, the Band then syncs your data to the Microsoft Health mobile app, which displays your most recent workouts, how many steps you’ve taken, how many calories you’ve burned, how much you’ve slept, and more. Unlike Apple Watch, which requires you to have an iOS device, Microsoft Band welcomes everyone to the health-tracking party. It works with Windows Phone, Android, and iOS devices, which makes sense if the software is the main draw here, not the Microsoft-specific hardware. (There are some drawbacks to using an iOS device with it, which I’ll get to. But it’s mostly functional.)

Microsoft Band feels like it's having an identity crisis

Microsoft Health on the web goes even deeper. When Microsoft suggested I check out the website, not just the mobile app, I have to admit that I thought — I should go to the website? Really? Like it’s 2007, and I’ve just tethered my sport watch to my PC to dump the data? But the Health site is addictive. Want to know what your personal best workout is? What your average daily calorie burn is? What your resting heart rate and peak heart rate levels are? How efficient or restorative your sleep is? And how all of that compares to other people like you, in your age range, with a similar body mass index? If you’re a data nerd, Microsoft is happy to give this to you on the web.

On top of that, Microsoft Health shares data freely and quickly with other select health apps — so in my case, the activities I did immediately showed up in my Strava account, or my MyFitnessPal app. 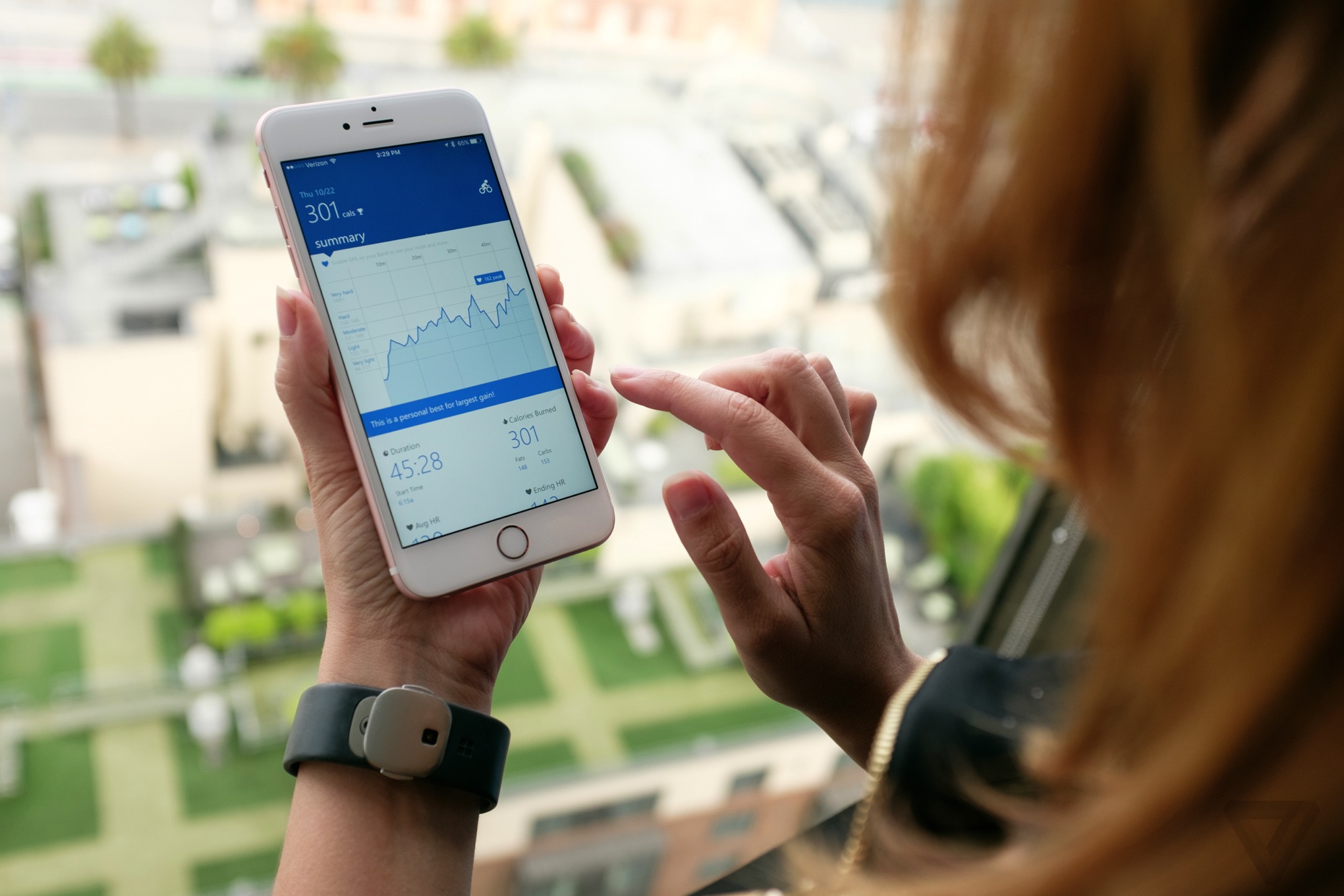 The only issues I had with the software had to do with the fact that I was using an iPhone. Cortana, Microsoft’s virtual personal assistant that you summon with your voice, isn’t yet available on iPhone, which means you can’t use Cortana on the Band if it’s paired with an iPhone. And I regularly had problems wirelessly syncing the Band data to the mobile app, something Microsoft says is a known issue. The progress bar would just sort of hang there while I waited for my digital positive reinforcement to appear.

How could I forget? There are also some smartwatch-y features, in addition to fitness-tracking. The Band will buzz on your wrist when you get a new text message or incoming phone call. There’s a weather tile, a stocks tile, a Twitter tile, a Facebook Messenger tile. You can even pay for a Starbucks with your Microsoft Band, provided that you’ve loaded the balance from a gift card into the Health app. These work well, but further convince me that this Band has an identity crisis.

Yup, the Microsoft Band is a throw-everything-in-but-the-kitchen-sink approach to an activity tracker. Even Microsoft doesn't seem entirely sure where it’s going with this, or who it’s really for. Everybody? Fitness freaks? People who love Microsoft and want a smartwatch-like experience? Data nerds who love the Health software?

The challenge, then, is convincing people to spend $249 on the thing, and beyond that, convincing them to wear it every day despite its unforgiving fit and aesthetics. Personally, I would pass on the hardware and gladly use the software with some other device. Which may just be what Microsoft is angling for, anyway.