Windows Hello, Cortana, and all the best of Windows 10 inside the thinnest, most powerful Surface yet

Read next: The Surface Pro 4 review.

This year, Microsoft's Surface Pro has been flattered by the introduction of similar devices like Apple's iPad Pro and Google's Pixel C, but today the original tablet-laptop hybrid gets its own update. The Surface Pro 4 is now official, and it's thinner, lighter, and more powerful, while also having a larger display than its predecessor. Intel's Skylake processors and Microsoft's own Windows 10 are at the heart of the Surface Pro 4.

Panos Panay introduced the Surface Pro 4 by reminding us how transformative this line of devices has already been: "This challenge of the tablet and the laptop... which do you buy? Remember that problem? It's gone." There's a fingerprint sensor on the keyboard and Cortana integration inside the new tablet, which fits a 12.3-inch display in the same physical footprint as the older 12-inch device. The Surface Pro 4 is therefore compatible with existing keyboard accessories, though Microsoft has done a ton to upgrade its keyboard covers this year. And yes, there's an all-new Surface Pen as well, which also has an eraser on the end of it. The new pen has 1,024 levels of pressure sensitivity and attaches magnetically to the side of the Surface Pro 4 when not in use. It comes in a variety of colors and even has Cortana integration: you can activate Microsoft's voice assistant by holding the button on the stylus. 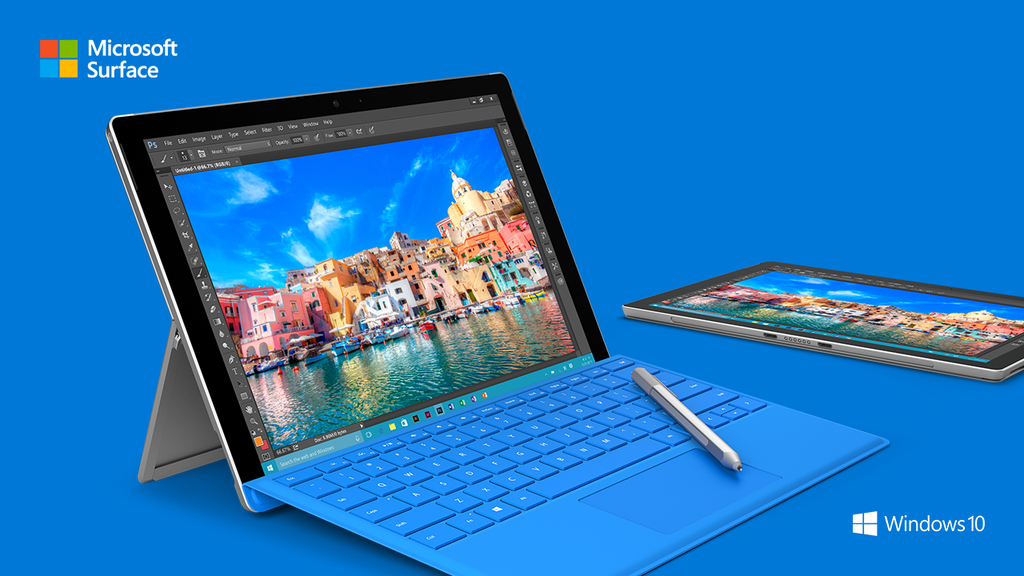 Microsoft says this is the "thinnest, most powerful" Intel Core PC ever shipped and it's "not even close." To make that possible, the company has tweaked and optimized multiple aspects of the design that are invisible to the user, such as the 0.4mm-thick Gorilla Glass 4 covering the front. Microsoft has even developed a special G5 chipset to run the optical stack. The promise is that this is the best, most natural touchscreen out there. Notably, though, Microsoft isn't comparing the Surface Pro 4 against other tablets, with Panay saying that they're just not in the same class. Compared against Apple's MacBook Air, however, the Surface Pro 4 is claimed to be 50 percent faster, while it also has high-end specs that wouldn't be out of place on an ultrabook laptop. Storage goes all the way up to 1TB and you can get 16GB of memory to go with that Intel 6th-gen processor.

The Surface Pro 4 is available to preorder now, starting at $899. It will be available on October 26th.

See all of the Microsoft news right here!

More from this stream Microsoft hardware event: news from the Surface Pro 4 and Lumia 950 XL event