The frightening promise of self-tracking pills

The frightening promise of self-tracking pills

A new digital pill system could save billions in health care costs — but will courts take it too far?

Some morning in the future, you take a pill — something for depression or cholesterol. You take it every day.

Buried inside the pill is a sand-sized grain, one millimeter square and a third of a millimeter thick, made from copper, magnesium, and silicon. When the pill reaches your stomach, your stomach acids form a circuit with the copper and magnesium, powering up a microchip. Soon, the entire contraption will dissolve, but in the five minutes before that happens, the chip taps out a steady rhythm of electrical pulses, barely audible over the body's background hum.

The signal travels as far as a patch stuck to your skin near the navel, which verifies the signal, then transmits it wirelessly to your smartphone, which passes it along to your doctor. There's now a verifiable record that the pill reached your stomach. 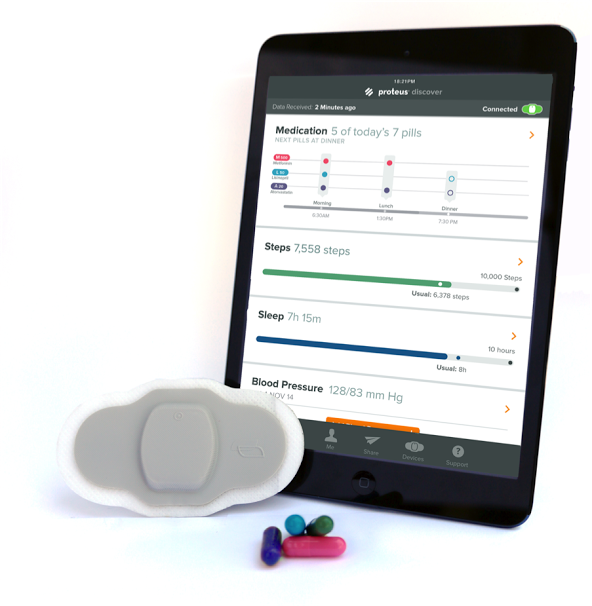 A company rendering of the Proteus system

This is the vision of Proteus, a new drug-device accepted for review by the Food and Drug Administration last month. The company says it's the first in a new generation of smart drugs, a new source of data for patients and doctors alike. But bioethicists worry that the same data could be used to control patients, infringing on the intensely personal right to refuse medication and giving insurers new power over patients’ lives. As the device moves closer to market, it raises a serious question: Is tracking medicine worth the risk?

The new device looks to tackle one of the simplest and least discussed problems in medicine: patients don't always take their prescriptions. Most studies find around half of patients skipping out on prescribed medicines, which makes it hard for doctors to know if a given medicine isn't working because it's badly suited to a patient or because it isn't being taken at all. Some patients forget medication, endangering their treatment, while others stop treatment early, needlessly prolonging illnesses. It's a massive source of waste in the medical profession, and solving it would add billions to hospitals and insurers' bottom lines.

Proteus was formed with an eye towards solving that problem, according to the same health-tracking logic as Fitbit and Apple's HealthKit. If patients can see how well they're doing, they'll want to do better, and adding in external measurements can give them a direct sense of how the medication is helping them get better. "Once a patient is using our solution, they can see how they're using their drugs, they can see how it affects their body, and we can create all kinds of behavioral tools that enable them to keep doing that," says Proteus CEO Andy Thompson.

"It means much, much more than just that we can track your compliance."

The Proteus device will still only monitor pill intake, but it can be paired with other metrics for a much more comprehensive picture of how your body responds to the medication. "It means much, much more than just that we can track your compliance," Thompson says. "It means patients are going to be actively engaging with their health care on a regular basis just by using their smartphone."

But not everyone's convinced that the ability to track pills will be good news for patients. The right to refuse treatment is an important, fragile principle in health care. Many are worried that tracking whether a pill is being consumed will be the first step towards punishing patients that don't comply. While doctors can’t force a patient to take a pill, court orders frequently mandate treatments involving specific drug regimens.

"It's a different world than saying I consent to taking these pills."

NYU bioethicist Arthur Caplan says he can imagine a judge using Proteus to enforce medication as part of a sentence: miss a pill, and your parole is revoked. "The temptation in the legal system to say, 'I can monitor you and make sure you're not a threat' is going to be huge," Caplan says. "Maybe that's good, maybe it's bad, but it's a different world than saying I consent to taking these pills." Those court orders are rare at the moment, since there’s no way to ensure a patient is taking medication outside of a controlled treatment facility — but as pill-tracking becomes easier, those measures could become much more common.

That's particularly likely given the way Proteus is entering the market. The device's first partnership bundles it with Abilify, a powerful antipsychotic most commonly used to treat mood disorders, schizophrenia, and Tourette's. The most common effects are improved concentration and decreased hallucinations, but it comes with extreme side effects like increased suicide risk and a lower seizure threshold. It's most often prescribed in cases of severe mental illness, often in psychiatric institutions or as part of a court-mandated treatment program — exactly the scenarios bioethicists like Caplan are most worried about.

Another tool for courts

Patients' best protections are medical privacy laws like HIPAA, which prevent medical data from being shared with anyone outside the hospital system. That would stop your boss or your parents from using Proteus to make sure you haven't fallen behind on your anti-anxiety medication. But those laws won't keep data out of the hands of healthcare providers, and Caplan is concerned the pill could also be used to enforce compliance. Insurers might offer a discounted rate on tracked pills, then hit patients with a $100 co-pay for every treatment they miss. It's not as oppressive as a court order, but the end result would be similar.

Proteus says it's already consulting with patient advocates and bioethicists on the ethical issues involved, but acknowledged that there are serious questions at stake. "We think Dr. Caplan has thoughtfully raised important points," the company said. "We agree with everything he says."

Still, those concerns are unlikely to keep Proteus out of the hands of doctors. The upcoming FDA approval will focus largely on safety and efficacy, leaving the larger ethical challenges to be solved after the drug is released to doctors and patients at large. With the technology available, it will be up to the courts to decide when it’s legal and ethical to use it. As far as Proteus is concerned, the power of the technology outweighs the risks. "There are challenges with bringing digital into any sector," a company representative said. "The reason to embrace the challenge in health care is because the need is so great."