HP made a Surface competitor with an even cooler kickstand

Share All sharing options for: HP made a Surface competitor with an even cooler kickstand

HP is taking on the Surface. Again. This morning, it's introducing the Spectre x2, a 12-inch tablet that's bundled with a thin, detachable keyboard and can be propped up using a built-in kickstand. It's a pretty stylish package. Along with other PCs being introduced today, HP is trying to make the Spectre x2 look like something that would fit inside a modern home. I wouldn't say I'm an expert in modern home design — I just hung tablecloths over my windows as drapes — but my impression is that this machine would not look out of place at a Pottery Barn.

That design language is most noticeable when it comes to the Spectre x2's kickstand, which is unlike most other tablet kickstands seen to date. Rather than having a large chunk of metal swing out of the back, like the Surface does, the Spectre x2 has a thin, U-shaped bar that pop outs out and can sit at any angle. That makes the entire package much more elegant looking than the Surface, even if it's not a perfect design overall. The kickstand picks up fingerprints very easily, for instance, and there are huge black bezels to either side of the tablet's 1920 x 1280 display. 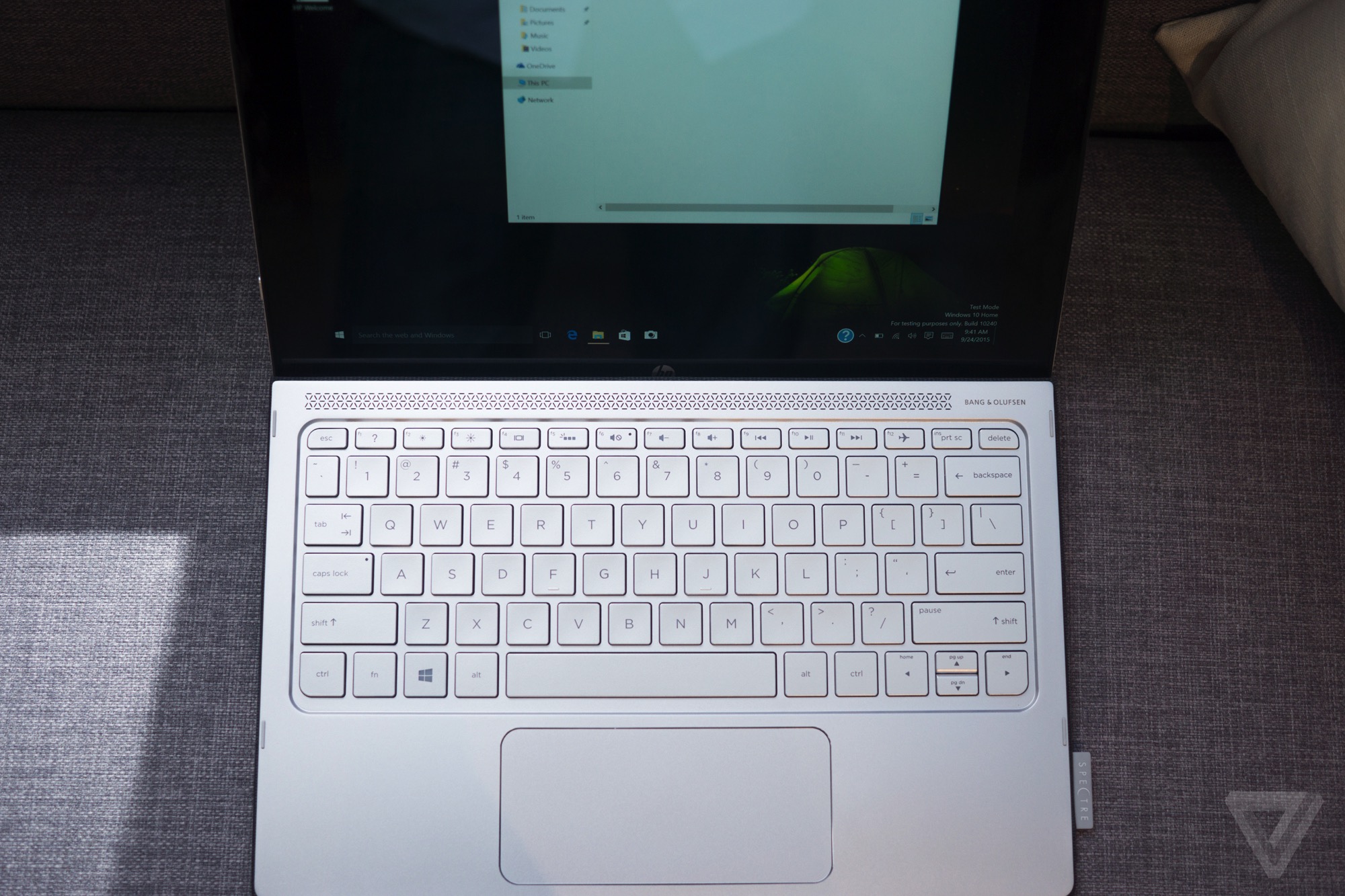 The Spectre x2's keyboard is also unlike what you'll find on all but the most recent Surface models or the iPad Pro. While the keyboard is covered in fabric on the back, the top of it looks just like any other laptop keyboard. It's made of metal. It has chiclet keys. They're even raised up and travel down when pressed. Typing on it feels almost entirely normal — the only giveaway that it's an attachment is that the keyboard tends to bounce ever so slightly when you type a bit hard. 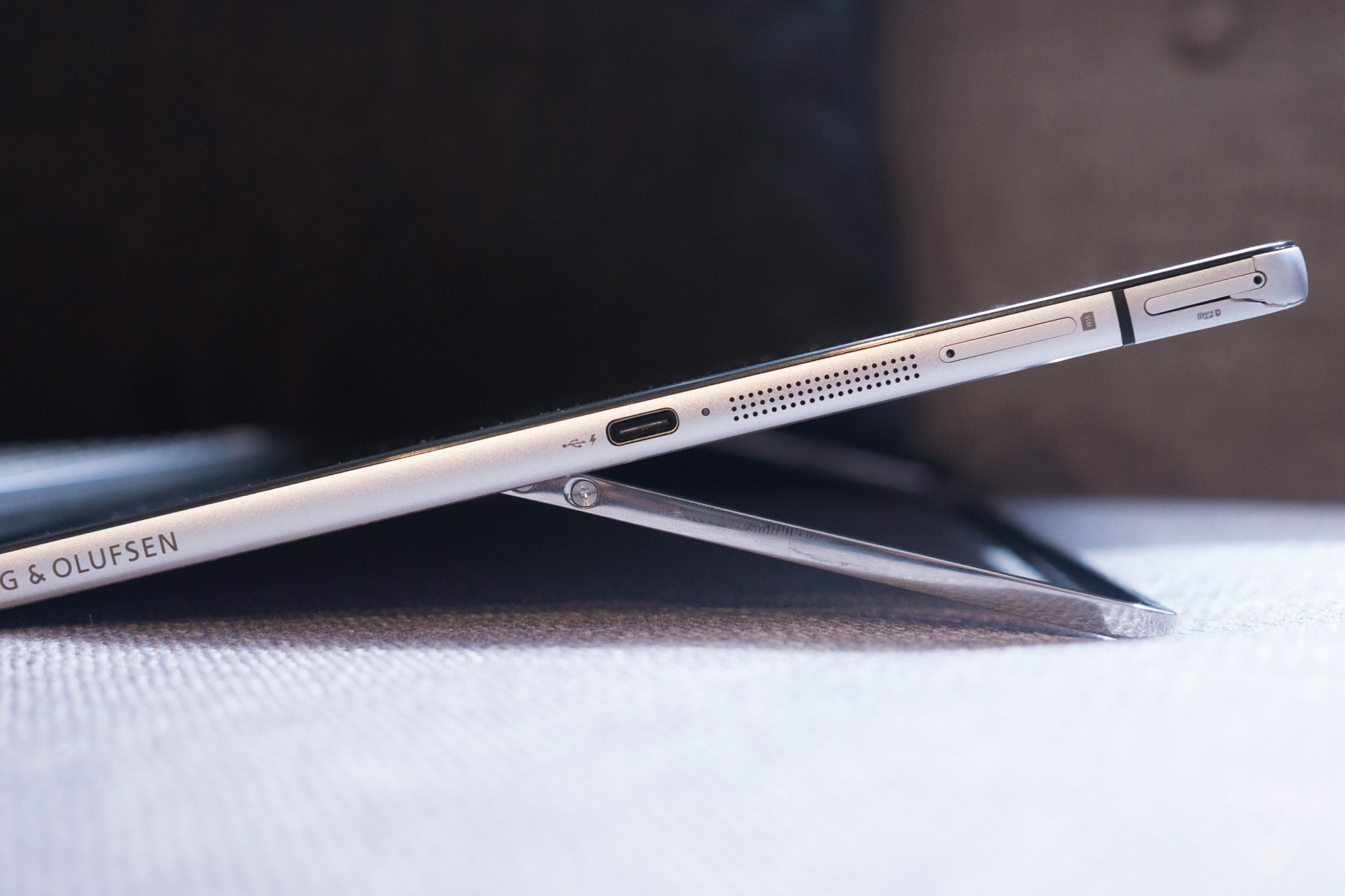 The Spectre x2 sits between the two Surface lines 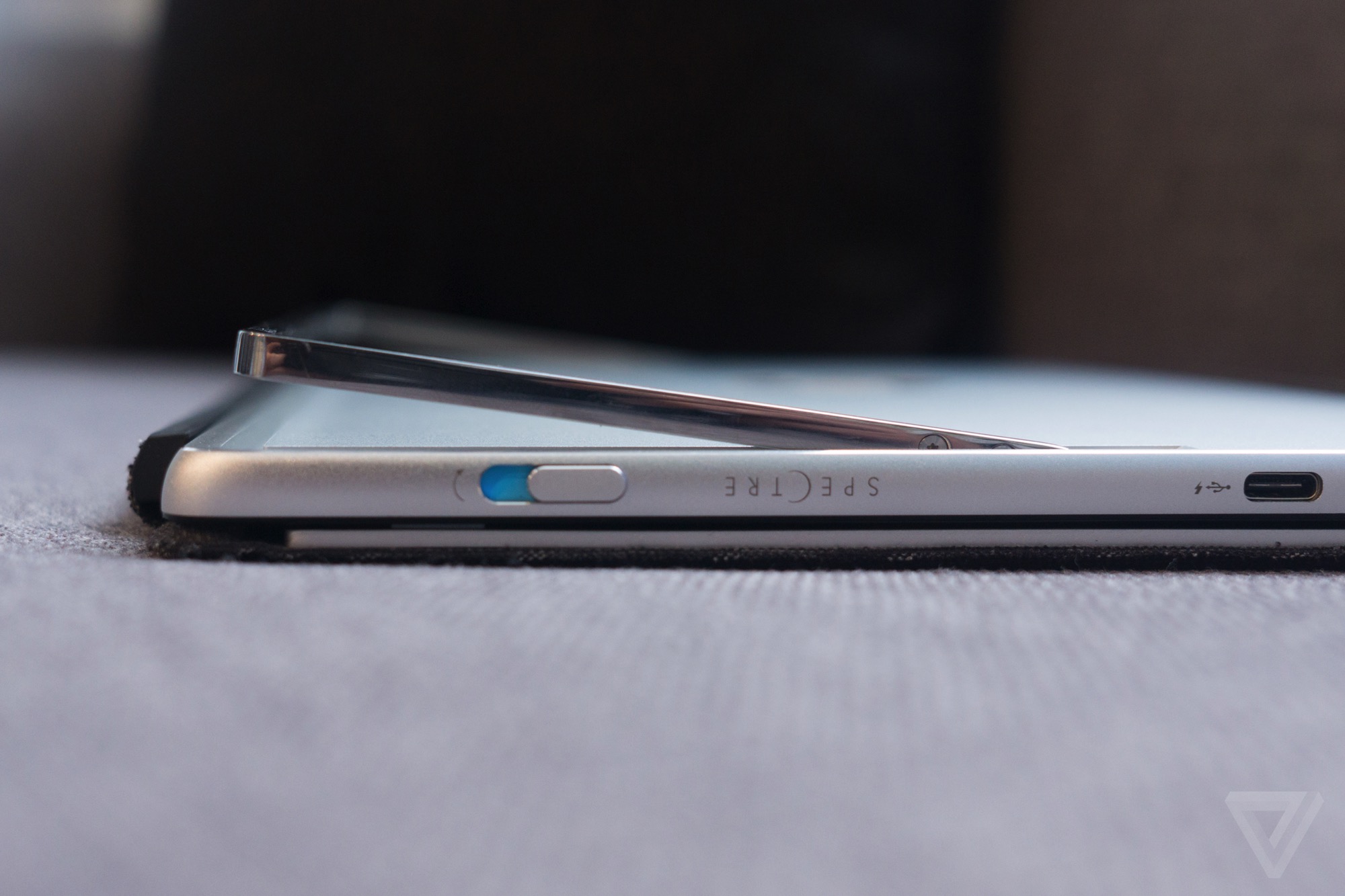 HP's machine actually sits at an interesting place between the Surface and Surface Pro — it's power and price, $799.99 and up, are both right in the middle. The Spectre x2 is running on Intel's Core M processors, from the new Skylake line. That's the same family of processors being used by Apple in the new lightweight MacBook; if this machine gets similar performance, it should be perfectly capable for light use. The Surface line sits right below that, using Intel's Atom processors, while the Surface Pro line sits above it, jumping up to Intel Core processors, which deliver typical laptop power. HP may be in a good position to grab customers who want a bigger screen and a bit more power but don't want to jump all the way up to a Surface Pro.

The Spectre x2 can be outfitted with an M3, M5, or M7 processor, with 4GB or 8GB of RAM, and with either 128GB, 256GB, or 512GB of storage. It has an SD card reader and two USB-C connectors — either of which can be used to charge it — and it merciful includes an adaptor to the more familiar full-sized USB. The Spectre x2 also supports LTE on Verizon. It has front and rear cameras, as well as one of Intel's 3D RealSense cameras on the back. It'll go on sale November 8th, with prices starting at $799.99.

In addition to the Spectre x2, HP is also refreshing two laptops today. That includes the Spectre x360, a 13.3-inch laptop with a hinge that lets its display flip around so that it can be used like a tablet. The x360's main change is an update to Skylake processors, but the best update is that it now adopts a very similar style to this black and copper laptop that HP introduced in July. It looks good. It'll be available the same day starting at $1,299.99.

HP is also refreshing the Envy Notebook, which is a just a standard 13-inch laptop — no touchscreen or strange flipping action. It's getting an update to Skylake processors, a slightly slimmer build, and a redesigned keyboard. It mostly looks the same. It's main advantage on the x360 is price: the Envy Notebook starts at $899.99, while the x360 starts at $1299.99. Its sales begin October 18th.

Plaid, the service used by Venmo, Acorns, Robinhood, and more, may owe you some money