DJI is introducing the Osmo, a $650 handheld stabilizer with a fully integrated 4K camera

For the last two years the DJI Phantom has been our favorite drone. It's cheap and easy enough to be accessible to the average consumer, but powerful enough to satisfy professionals. It's been the unit that led the way as drones democratized aerial imagery, making dramatic shots previously reserved for Hollywood an option for anyone with $1,000.

Today, DJI is introducing the Osmo, a handheld stabilizer that tries to repeat the same trick. It takes the camera and gimbal technology of DJI's drones and repackages it as the ultimate selfie stick. The goal is to make cinema-quality stabilization and 4K video accessible to the average consumer, while winning over lots of professionals on a tight budget as well. The Osmo goes on sale today, and will start shipping October 15th. 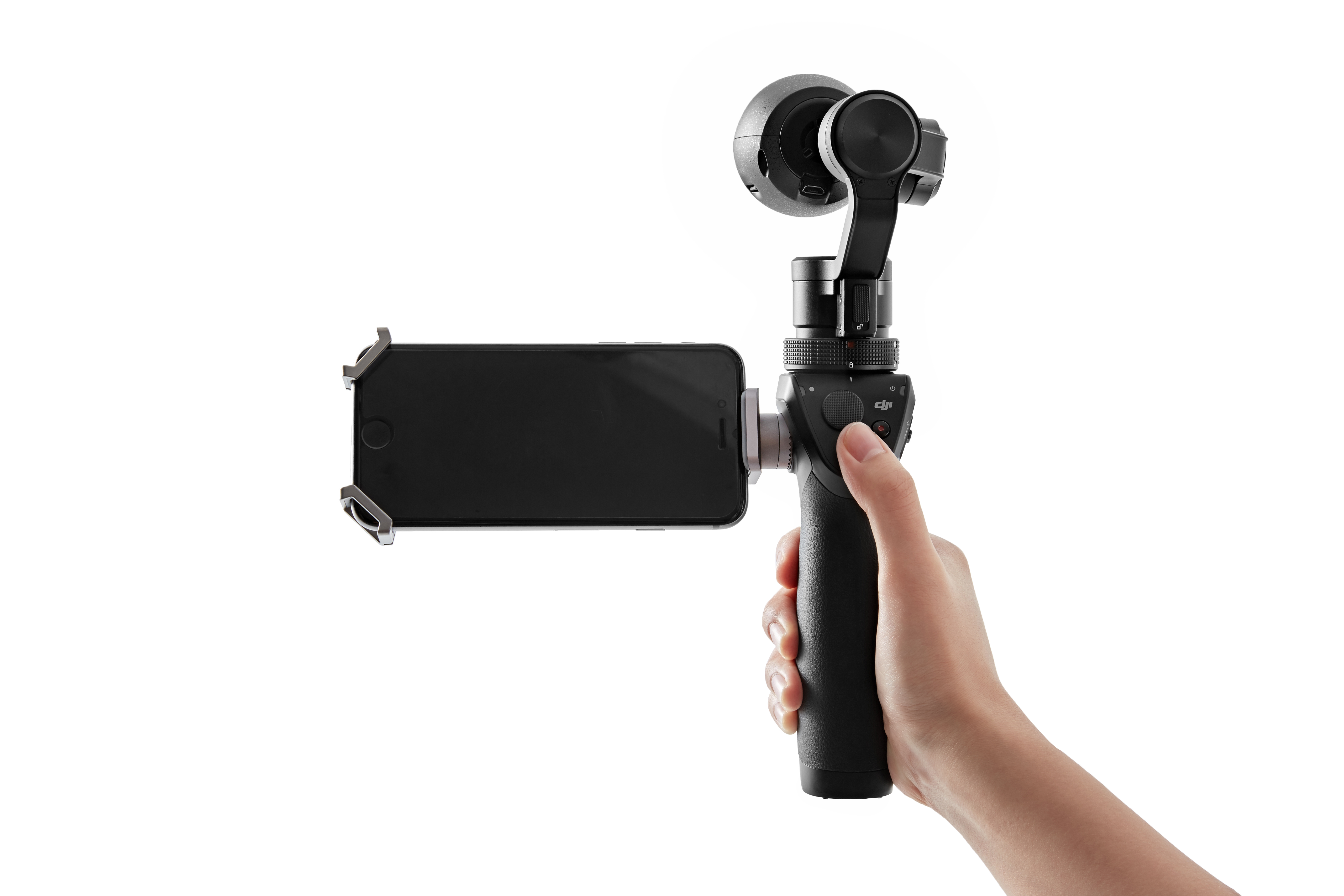 The form factor is a handsome 6.5 handle with a three-axis gimbal and camera on top. The unit is made of plastic and aluminum, allowing it to remain a light 201 grams. It's not cheap, retailing at $649, although you can buy the stick without the camera for $219* if you already own one of DJI's Zenmuse cameras, which are interchangeable on top of the Osmo. Its most basic application is taking photos and videos of yourself and your surroundings; for that the Osmo comes equipped with a modified version of the camera found on DJI's Inspire drone: a 12-megapixel unit with a 1/2.3-inch sensor and a 94-degree field-of-view lens that can shoot 4K video. It's got an internal mic for recording basic audio and a jack to plug in an external microphone if you want to get fancy.

You align the camera with a trigger that sits underneath your pointer finger as you grip the handle. Double-tap and it will orient forward and adjust to match the way it's being carried. It can adjust to three different grips: your typical smartphone grip; a flashlight carry; or it can be slung down like a shopping bag, a position that produces very cool effects when you hold the camera off the side of an open vehicle.

Triple-tap and it spins to face you, allowing you to shift easily into selfie mode while running or riding a bike. Opposite the trigger is a control pad you operate with your thumb. You have a shutter button for snapping photos, a button to start and stop recording video, and a trackpad you can manipulate to change the camera's orientation.

The Osmo works with the same DJI Go app that you'd use when flying its drones. Unlike with the drone, you don't need to connect your smartphone or tablet with a USB cable. The Osmo throws off a Wi-Fi signal you can connect to, and you can keep the phone up to 25 feet from it and still get a live feed on your device, as well as control camera settings like shutter speed and ISO. That means one person can handle filming with the Osmo while a friend nearby focuses on perfecting the shot. The Osmo also comes with a mount to attach your mobile device to its side, where it acts as your viewfinder and settings.

You can shoot in 24, 30, or 60 frames per second, and also capture slow-motion footage at 120 frames per second. It uses a standard microSD card for storage and DJI says you get about 60 minutes of recording in 4K and six hours of standby on a single battery charge.

The time-lapse mode worked well in our testing, but the panorama had some bugs. It's very cool because you don't have to spin around: you just tap a button and the Osmo camera rotates to capture five pictures it stitches together into a 360 degree view. When I tried it out the Osmo captured me twice, producing the rare double-duck selfie, but this was a beta, and DJI will likely have the bugs ironed out by the time the final product is released. 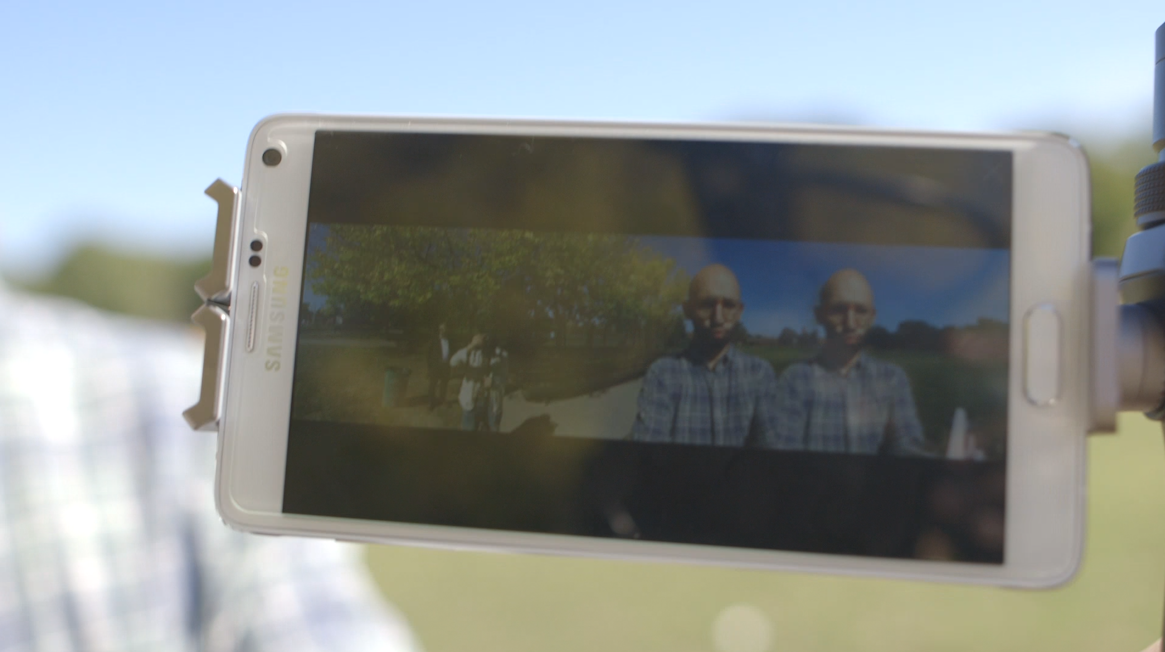 After our hands-on I spent a few hours reviewing the footage we shot and talking about it with my film crew. The stabilization on all the footage was great, especially on my bike and when it was facing me as I was running. But the footage it captured while it was facing away from me looked, to our eyes anyway, a little bit odd and artificial, an issue I noted when testing the DJI Phantom 3 as well. DJI really needs to work on allowing the camera to ease as you move. It's a little too stable, lacking the more fluid movement our video teams gets with glide-cam equipment and DJI's higher-end stabilizer, the Ronin.

You also begin to see the limitations of a tiny 4K camera that costs only a few hundreds dollars to make. From the air DJI's footage looks incredibly crisp, if a little oversaturated. On the ground, however, with the focal length adjusted from infinity to one meter, you can begin to see that the focus, at least in auto mode, is not as tight as it would be if you brought your own DSLR. That combination — of a glide unit and high-end camera — would certainly end up being a lot bigger, heavier, and more expensive than the Osmo. On the other hand, while the new iPhone can shoot 4K video, it's far less flexible and powerful in terms of camera movement and stabilization. That's the gap DJI is trying to bridge.

I came away from my day with the unit impressed, but not convinced, that the Osmo could replace expensive glide cams for a professional, and be worth the money for the average consumer who gets a pretty decent experience with their $50 selfie stick and the Hyperlapse app. It's walking a very fine line, one DJI nailed with its Phantom drones. Whatever the eventual market size, the Osmo is certainly proof that DJI isn't really a drone company, but a more well-rounded innovator focused on combining cameras and robotics in a variety of interesting new ways.