Hi, my name is Rick Chapman and I'm soliciting some opinions on previous portrayals of Steve Jobs in "Pirates of Silicon Valley (Noah Wyle) and "Jobs" (Ashton Kutcher). I'm a software and high-tech industry veteran (was once the product manager of WordStar) and have worked at Ashton-Tate and similar venues. As to Mac, I've owned the original, Mac II, SE and SE 30, iMac Graphite, as well as an Apple II and II+.

I'm also an author ("In Search of Stupidity: Over 20 Years of High-Tech Marketing Disasters" ) and have recently released my latest novel "Selling Steve Jobs' Liver: A Story of Startups, Innovation, and Connectivity in the Clouds" which is about exactly what it says. Won't talk about it now.

I'm sure many of you have heard about the new "Steve Jobs" movie that's going be released on Friday. Sorkin has said it's based on Isaacson's book, not the later one by Schendler/Tetzeli. I'm going to be seeing the film on Saturday and will be writing an extensive review and posting it up Monday/Tuesday on www.rule-set.com. I'd like to hear some opinions on if/how the previous movies about Jobs hit the mark, what you liked, what you didn't, what you think the new film can add to the narrative.

I did meet Jobs in person in 1989 or 1990 and will talk a bit more about the encounter in the review, but am interested in other takes and perspectives. 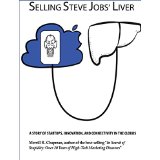