Update October 16th: The Verge has learned that some of the vulva emoji below were based off of artist Erin Tobey's work. They were plagiarized without her knowledge. You can read about it here.

These stickers are racially diverse, asymmetrical, and unapologetically hairy — and now you can paste them into messaging apps as needed. To find out how these vaginas came to be, The Verge got in touch with designers Katy McCarthy and Jeremy Yingling to talk about their process. 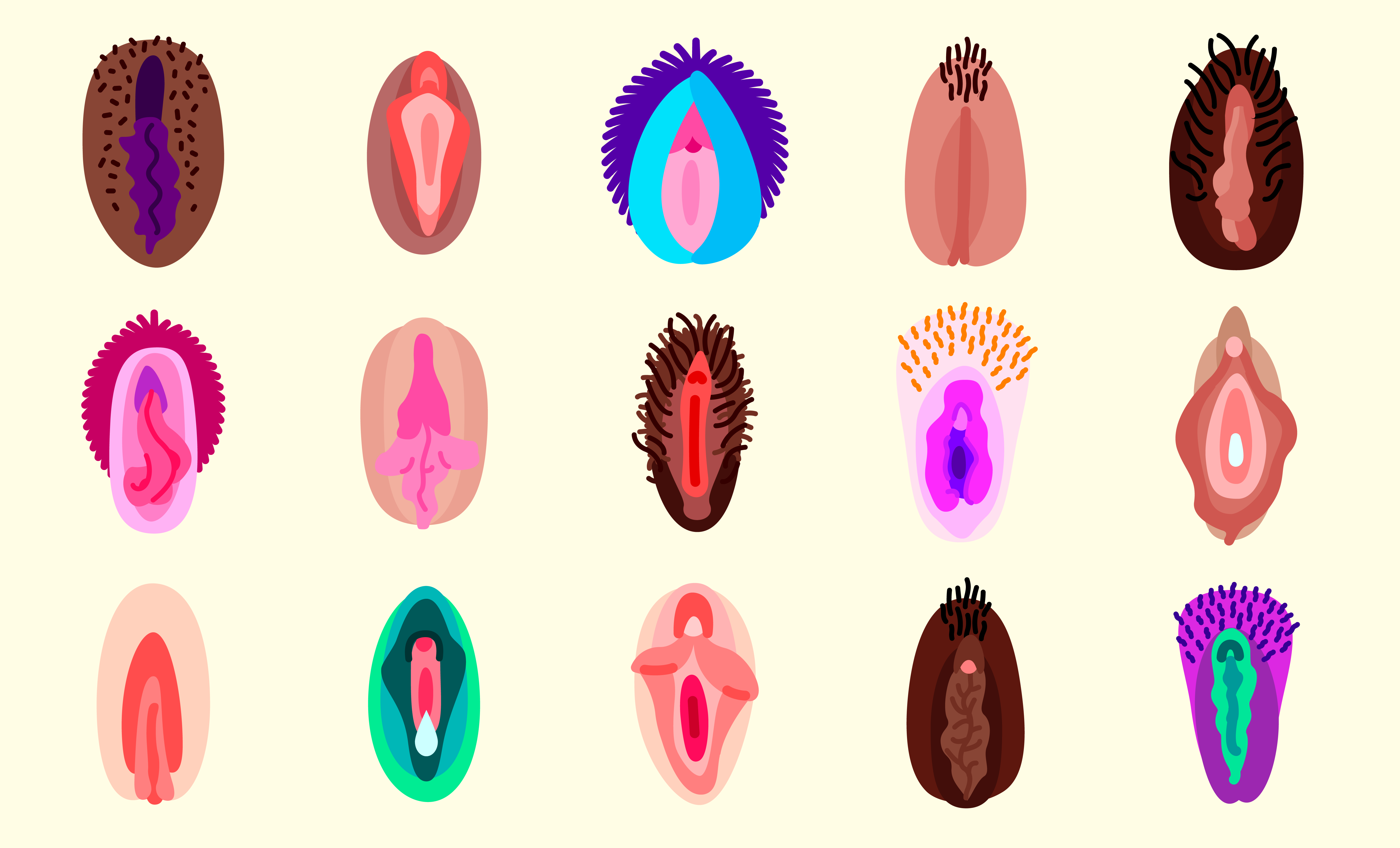 Today, Flirtmoji is releasing five of these vagina stickers.The long-term goal is to release all of the above, in addition to other body parts.

This interview has been condensed and lightly edited for clarity.

These vaginas are incredibly diverse. What was your process with this, this time around?

Jeremy Yingling: It was a long one. I was an icon designer before starting Flirtmoji, and symmetry is something that's really valued with icons, for legibility and for keeping everything balanced. So that's very much how we approached Flirtmoji and how Katy and I started drawing genitals. And, you know, after drawing maybe a dozen penises and vaginas, we thought things would be more interesting when things are a little bit off-kilter.

So we started looking at references images; there was a lot of Google image searching for many explicit terms and again, the thing that's beautiful about a particular body part is when it's not symmetrical, or it's off-angle or it's from a strange perspective.

"The Thing that's beautiful about a particular body part is when it's not symmetrical."

Katy McCarthy: There was one [vagina], I remember, that we were going to cut. And it was the one that was the least symmetrical of the original group. But a friend looked at it and said, "Well that's the one that looks the most like mine!" So we were kind of in this interesting design dilemma of wanting to create something iconographic and wanting to be representational. And we realized that these things could be reconciled.

One that really stands out to me is the icon with the purple lips, right in the middle. That's something that you don't often see in representations of genitalia, but darker lips with a purple hue is something you can actually see in women. How did you come up with this particular sticker?

KM: Jeremy just did a lot of reworking of our color scheme and I think that's pretty influential in the way that we see things now as designers. We do a lot of looking and studying and trying to figure out "what color is that really?" It's not just pink. Like we'll go to the metaphor that you have in your head and try to take a deeper look at the color that's happening. And there's this whole wide amazing range to be embodied visually. 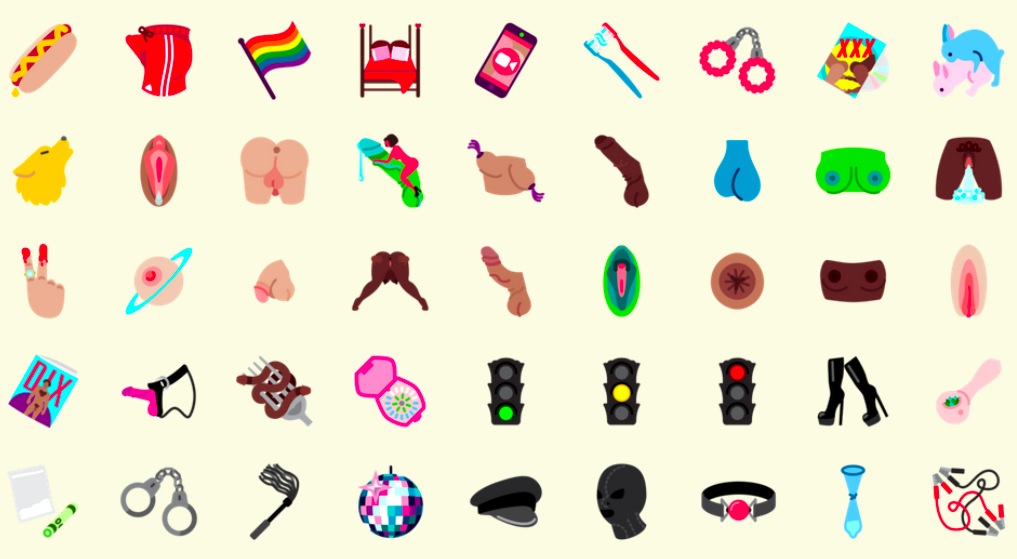 Some of the stickers that Flirtmoji released last year. (Flirtmoji)

You mentioned earlier that your process involved a lot of image searches. Was that the main way that you came to these designs?

JY: Oh boy, umm sure. Yea. [laughs] I mean the internet is a huge resource. At this point in time, millions of pictures of genitals are available online — and what a bizarre and beautiful concept that is. So, throughout this project, we were harvesting that however possible. [There were] certainly a lot of Google image searches. And certainly any time, me personally, I came across something that looked interesting or curious while watching pornography, I would take a screengrab and drop it in a folder so when it came to drawing, I would pull up my inspiration board.

"What used to be a genital idiosyncrasy now has a community."

KM: Also Tumblr has been pretty monumental for us. The way that Tumblr embraces a wide range of genitals ... they're really specific and inclusive, so what used to be a genital idiosyncrasy now has a community. You know, "regular dicks" is a Tumblr. And you can look up all these different kinds of penises to find that they are all normal. And then in other instances you'll find a community coming around a specific characteristic like hair and sharing these image, as a way of belonging and feeling comfortable and celebrating how you look.

So let's talk about hair. Last time we spoke, you mentioned that hair was something you were thinking about. And now you have these new designs — and some of them are pretty hairy. Why did you think including hair was important?

JY: It became possible, within our style, for one thing. One of the things that Katy and I really work hard on is having a unified esthetic for Flirtmoji which comes down to the color schemes and the size of the strokes. And man we tried to solve hair for a long time with our first line. And the strokes were just too big. But, you now, we finally had a little bit of time to evaluate our art and we saw an opportunity to downsize the strokes a little bit and that suddenly made it possible to do all kinds of weird, hairy, fluffy, pube-y shapes. It was always a priority for us.

So the challenge was making the hair small enough so it would look good in a text message?

JY: Yea. The way flirtmojis are presented on the website, the hair is one pixel. It's basically as small as you can make something crisp within an icon. Whereas in the past, it was 2 pixels and in a 100-pixel icon that was not a lot of room to make something really hairy. 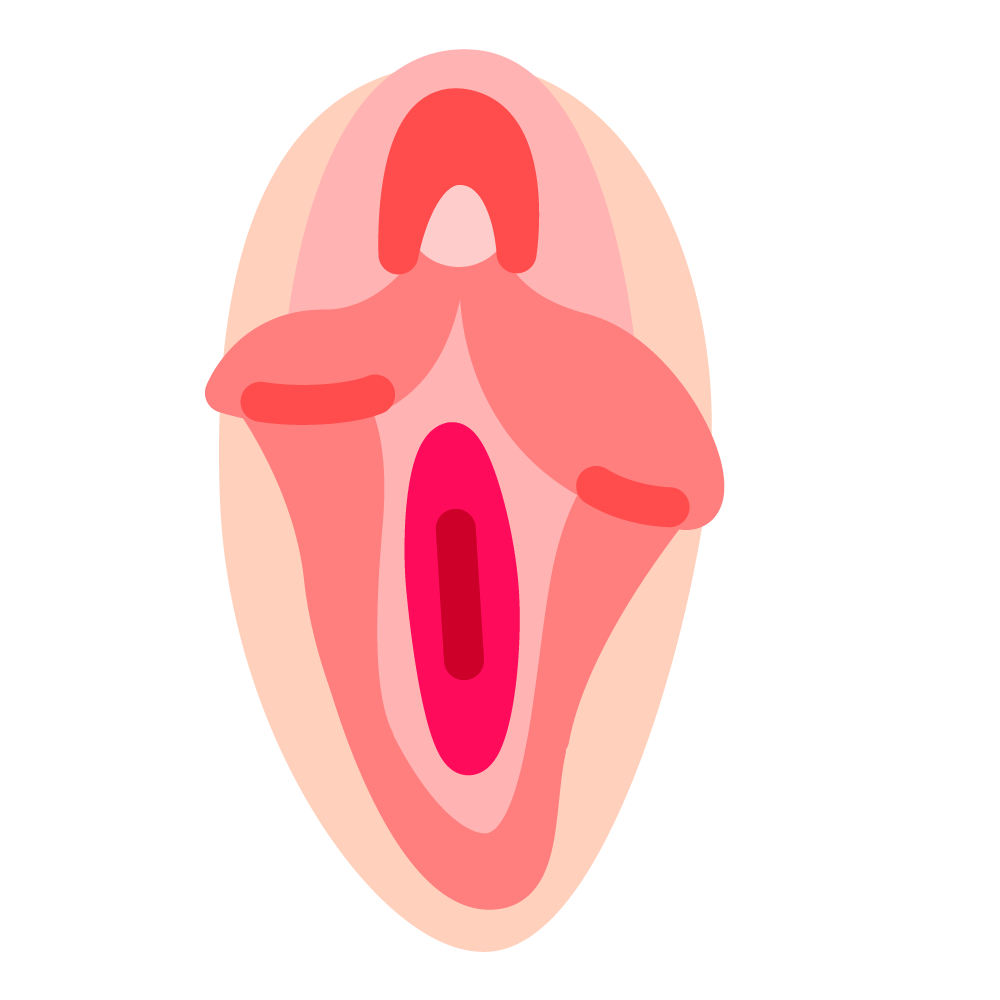 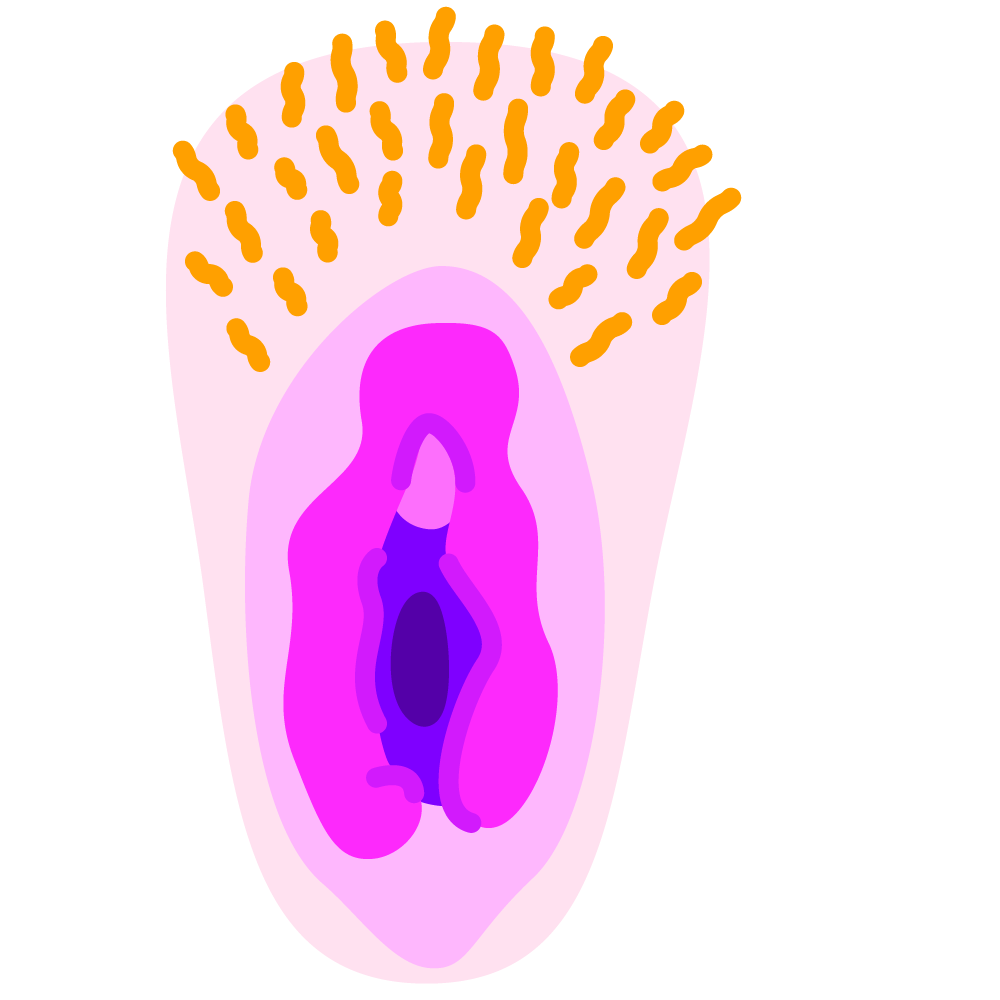 Do you have a favorite?

JY: My personal favorite has a dark-pink clitoral hood, and a really lippy labia. It's actually a hairless one.

Do you mean that one that — I want to say — is kind of flappy?

KM: I hope that this can be directly transcribed. [laughs]

JY: Yes, that's my favorite. It's one of the first ones that I really broke the symmetry on, and it looks more like a vagina after breaking the symmetry. Something about it actually became sexier to me, or easier to identify. And it's like a cool moment after drawing so many symmetric orifices to be like, "Oh wow that is true to life; that is very, very sexy."

"Oh wow that is true to life; that is very, very sexy."

What about you, Katy?

KM: Oh man, I'm really bad at picking one. I mean the plethora is what does it for me ... I think it's the one with the purple lips and the orange buzzcut.

Probably because of what we talked about earlier: The color sits somewhere in between reality and icon. I kind of know the quality of that color coming about, and that area being the subject of the whims of your blood. I credit Jeremy with killing it on that color combination. I mean it just goes somewhere completely elsewhere. You reference orange as being solidly anchored in this world, but purple belongs to almost, like, a dream you had and a drawing you made about your body. And it's just kind of loose and soft and interesting.

If you're interested in using these vagina stickers, you can pick a free mini-pack today by creating an account on Flirtmoji's website. Flirtmoji is currently working on a super-sized body pack that will feature "emojis of penises, vaginas, butts, boobs, and other beautiful naughty bits," the designers tell us. But in the meantime, the startup has decided to release sneak peak mini-packs to their users every Friday. Today, the preview includes five vaginas. Next week, Flirtmoji will release five penises.

Verge Video: The future of sex