What it's like to illustrate a cover for Marvel Comics

As embarrassing as this is to admit, my first foray into art was through furries and anime. (I can’t believe I am putting this on the internet after thoroughly obliterating any trace of my middle school art from the web.) Fandom was seminal in the beginning stages of my art career; I loved all of it and the fan art community was great at giving feedback. I slowly moved away from my “nerd” roots while studying art in school, and fashion, beauty, and film soon filled the space where manga and Harry Potter used to live. My senior thesis was 20 watercolor pieces of black women in high-fashion clothing and now I’m an editorial designer at Racked, Vox Media’s fashion site. 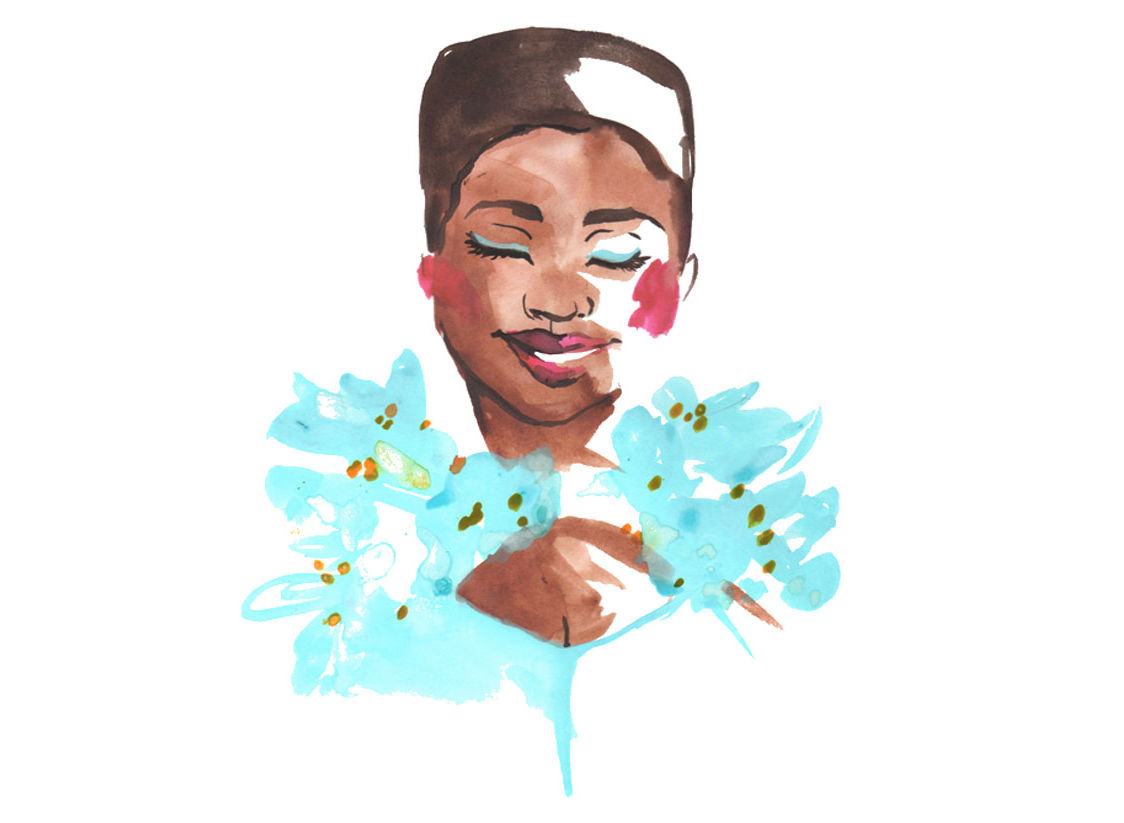 So I was particularly excited — and flattered and shocked — when an editor at Marvel contacted me to illustrate a cover. It was a return to my roots. He had seen the branding I had done for my friends who run Black Girls Talking and wanted me to take a crack at illustrating for an upcoming title called Illuminati, which features three lesser-known supervillains Titania, The Hood, and Thunderball as the leads. It would fall under the special variant series using hip-hop album covers as the inspiration.

Imposter syndrome is something I often deal with, and even though the editor told me he had seen my work and wanted me anyways, there was something I could not shake. Marvel is known for its slick colors, its detailed compositions, its beefiness. My illustration practice was impressionistic, messy, colorful and feminine. Drawing beautiful woman and beautiful objects became my bread and butter during my final year of school; my illustrations are an exercise in restraint. 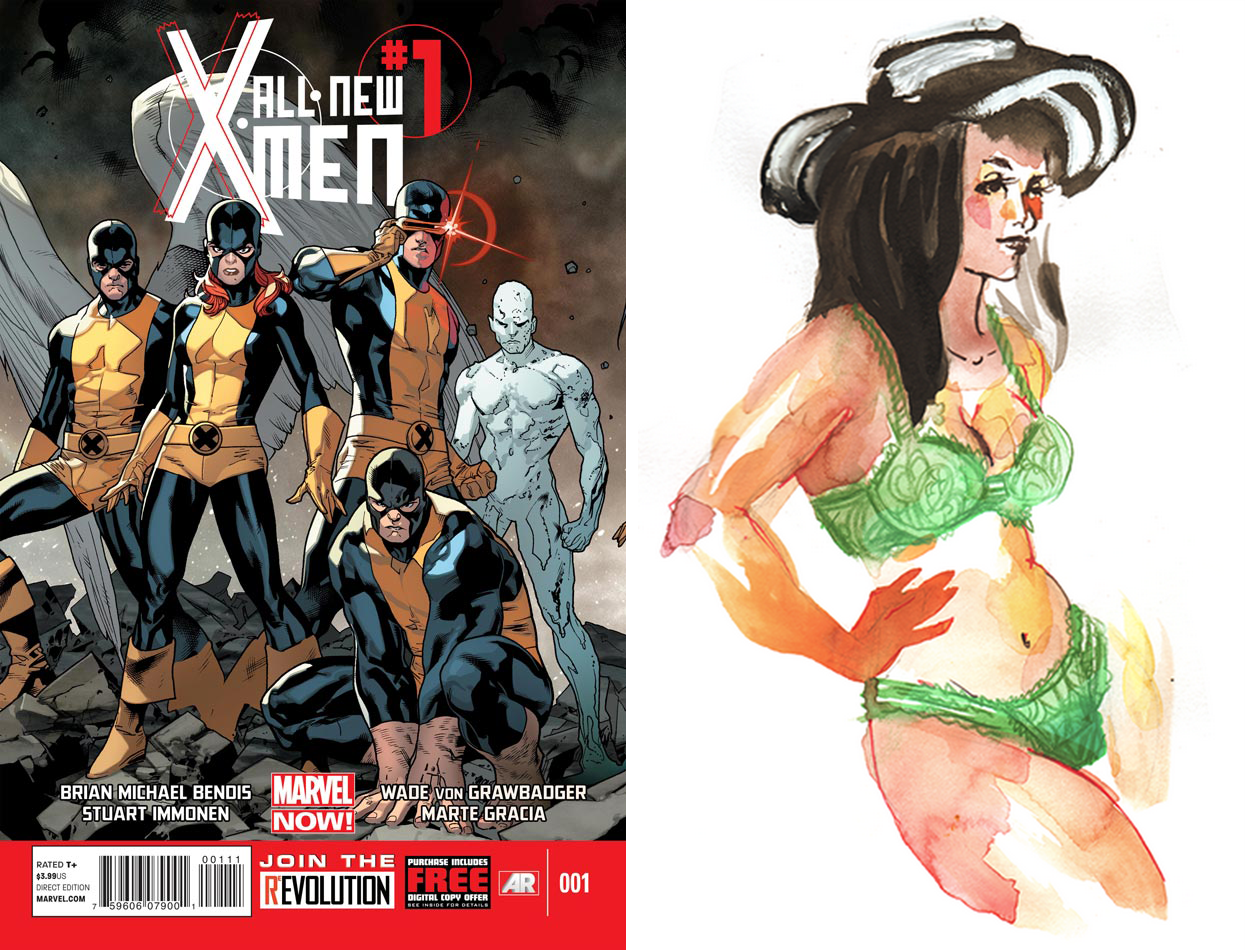 However, after I got over the initial terror (and texting my mom to tell her the good news), I accepted. How many illustrators can say they’ve illustrated for Marvel?

The editor reassured me that the assignment would be simple and play to my strengths (phew!). After asking for a couple more figure studies, he sent over character reference for the villains, which included past covers and character design sheets developed in-house, as well as the album art I would be recreating – Ice-T’s Power. Titania, The Hood, and Thunderball are all super villains within the Marvel universe and some pretty heavy hitters, which makes them perfect for the Power cover. Titania is their strongest woman character, while The Hood is a crime boss, and Thunderball often goes head-to-head against Thor.

Ice-T's 'Power' was controversial at the time

Power’s cover stirred up a bit of controversy after the release — thanks to the pose, styling, and the shotgun held by Darlene Ortiz, Ice-T’s then-girlfriend. Honestly, she pulls all the weight here; sexy but still able to hold her own. (I was secretly thanking the universe that I didn’t have to draw a background.)

I had to take a very different approach to this piece than with my personal work. I usually deal in watercolors, but because I would be going through multiple rounds of revisions, digital was the way to go. I usually stray from Photoshop if it’s not for post-production because I feel that my most successful work has my hand in it. Digital can get a bit too slick – but it also has an Undo button. I decided to use some brushes from Kyle Webster, an illustrator who not only creates work for big clients like Time, the New York Times and others, but has also garnered a huge following for his extremely realistic natural media Photoshop brushes. With these, I could try and capture the texture and effects from traditional media that I love but still be in control.

The length of a letter sized piece of paper is usually a good measurement for a full figure. I always start super sketchy with simple shapes and then flesh out details later. 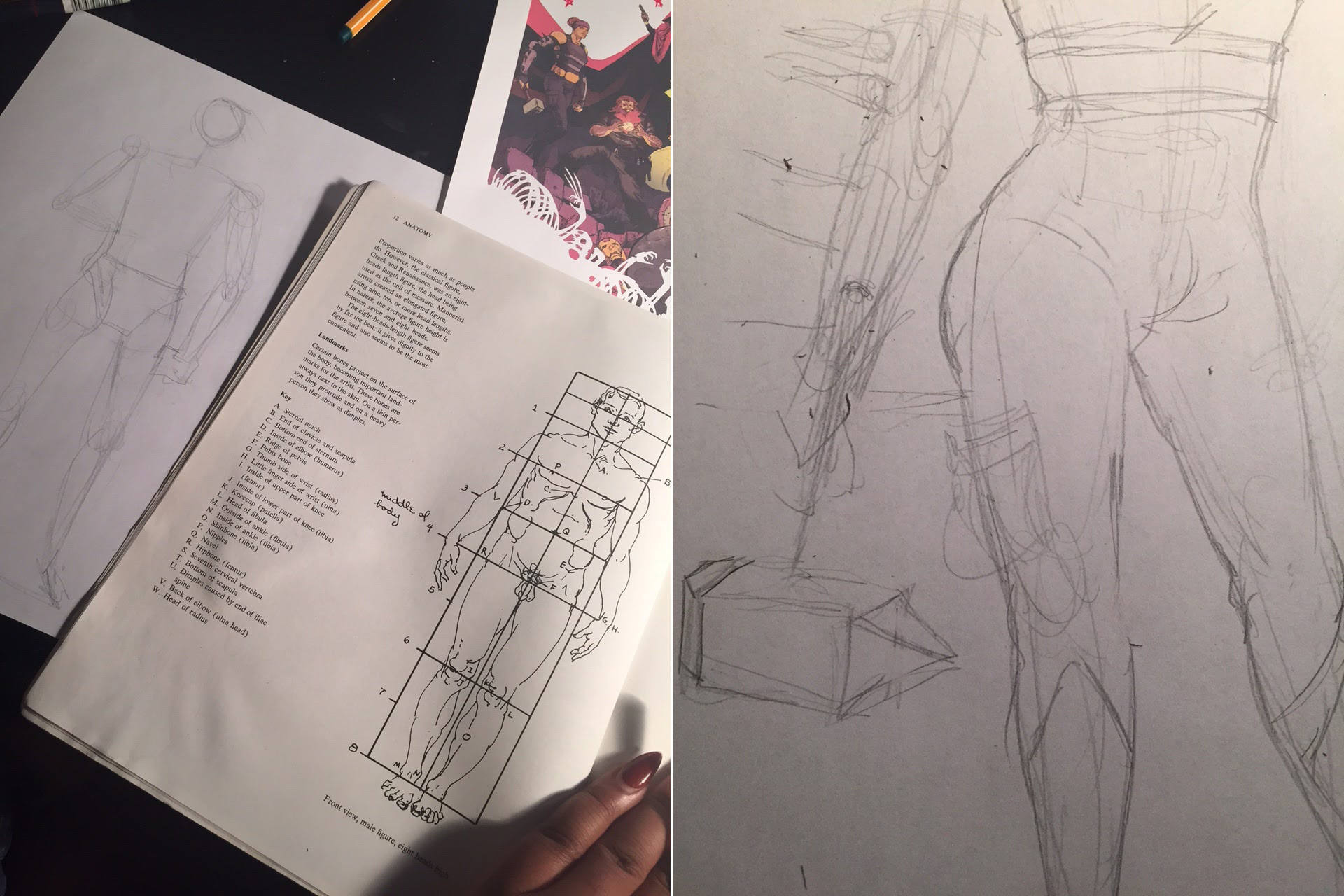 I scanned everything into Photoshop and threw down some simple color fields. When you’re illustrating for a client, it always helps to show them the type of colors you have in mind so they aren’t surprised by the final. There was also an extra step; Legal had to look at each step of my progress to make sure I was staying true to the original creations. 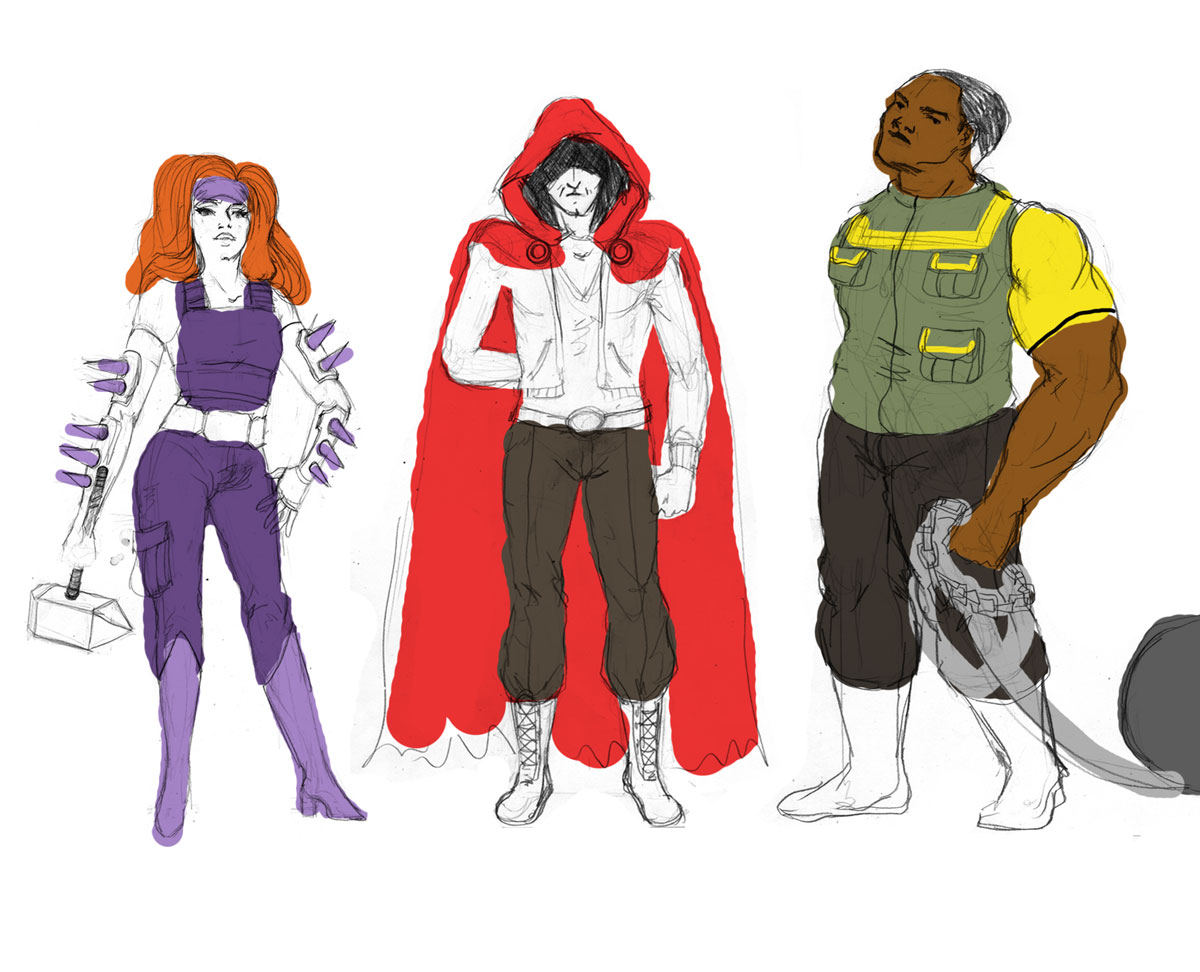 I took a few liberties with the characters the first time around, due to seeing various interpretations during my research. My editor was enthusiastic but sent over some more relevant reference and notes — for example, Titania’s hair is always in a top bun, The Hood always wears a suit and Thunderball is so muscular, you would probably see his other arm from the angle the viewer is looking from. 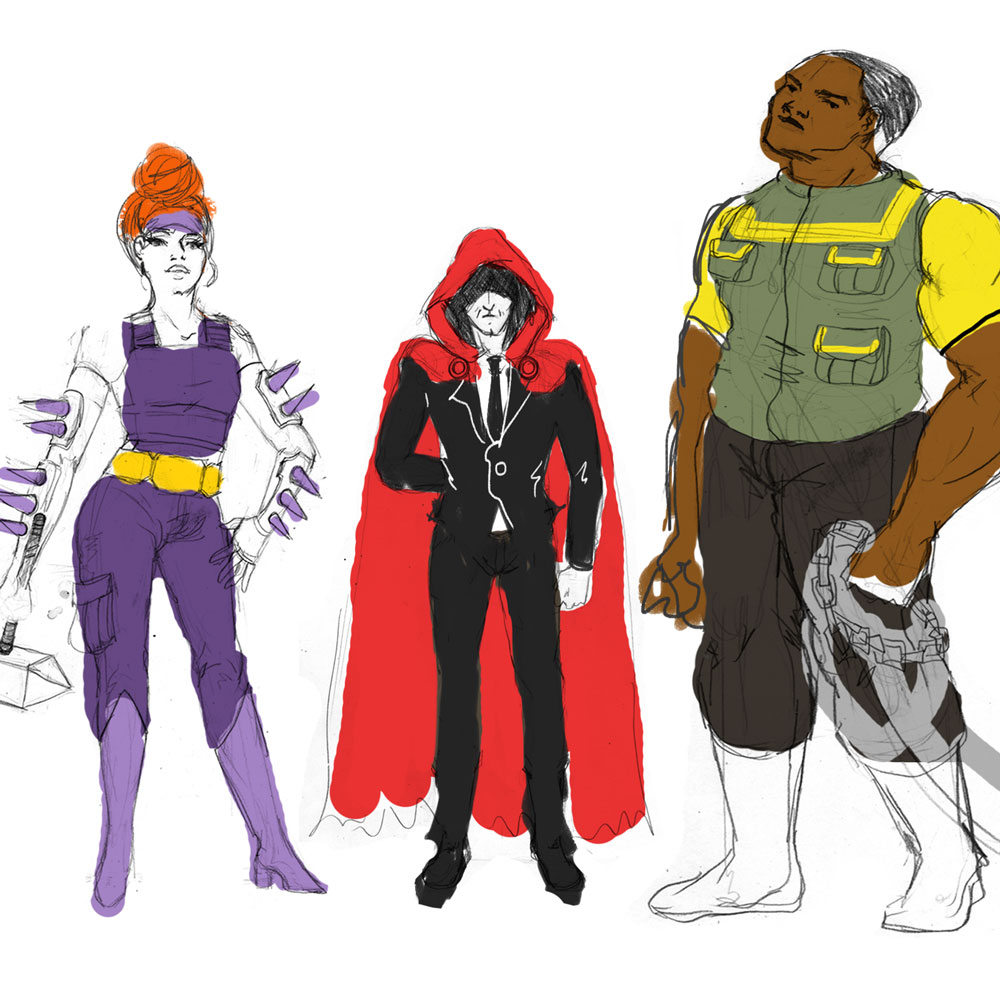 At this stage, we were ready to move towards the final piece. New York Comic Con was fast approaching and they wanted to make sure they could debut it the first day — no pressure! Impressionistic is a nice word for calling my work messy, and I wanted to avoid as much of that as possible. I decided to trace over my original sketches using my glass dining room table as a lightbox. I am nothing if not resourceful.

Traditional inking is tedious, especially if you use a tiny brush like I do, but also can be relaxing and meditative. I was working on this cover after coming home from my day job of design and illustrating, often late into the night. In Photoshop, I painted each character separately to really focus on the detail of each. Playing with the balance between painting over the line art and leaving some of them intact, the figures slowly started to look like any other piece I would have done. 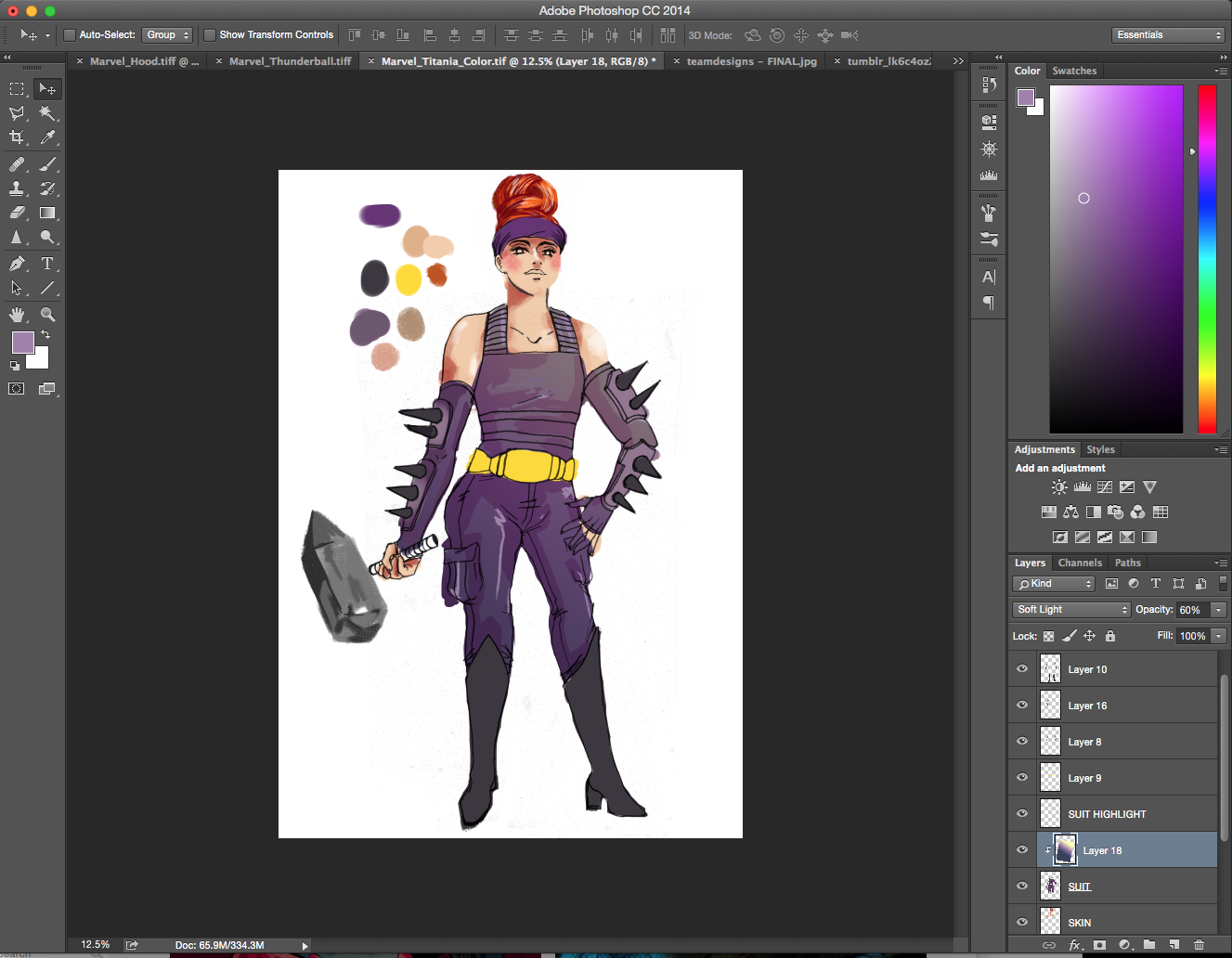 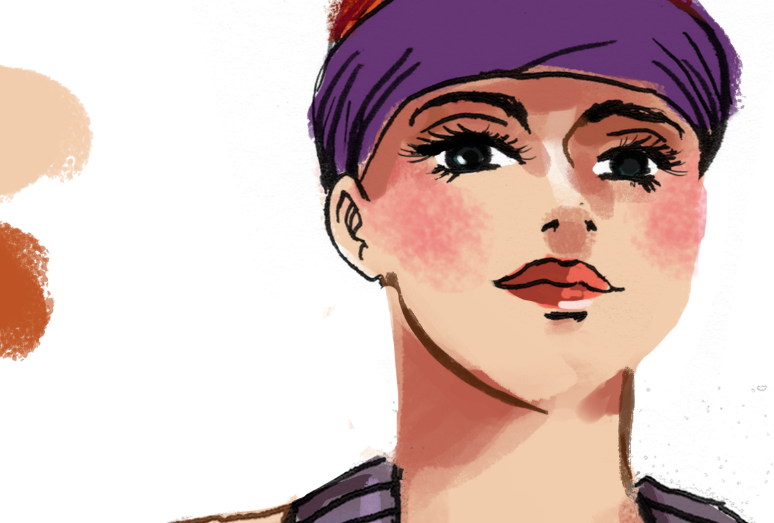 I set up my files like I would if I were doing a painting, placing blobs on the "canvas" to pull from as I worked. Working on one layer not only made it easier to keep things simple but it also made the layering of colors and textures believable; painting is full of happy accidents — who’s to say digital can’t have the same?

Returning to my roots

Work went like this for all of the characters. I saved them all out as separate .jpgs and dropped them in a new Photoshop file at Marvel’s print specifications. After agonizing over whether I was "worthy" or "qualified" to illustrate a Marvel cover, I really am proud with how it turned out. If someone believes in your work, you should too. And it felt great to get back to my roots in fandom; it’s where I started and I feel like I came full circle.