I love hatchbacks. There’s something so eminently usable about them: they’re compact and easy to park, but you can throw a Christmas tree or a full Costco run in the back.

Then we have the hot hatch. Start with a staid, normal hatchback. Add one part horsepower, one part attitude. Stir vigorously.

That’s more or less how the Ford Focus RS was born. After 15 years in Europe, the Focus RS — short for Rally Sport — is finally coming stateside, and I got to ride in one today at Willow Springs Raceway, a few hours north of LA.

Guess what? It was worth the wait. 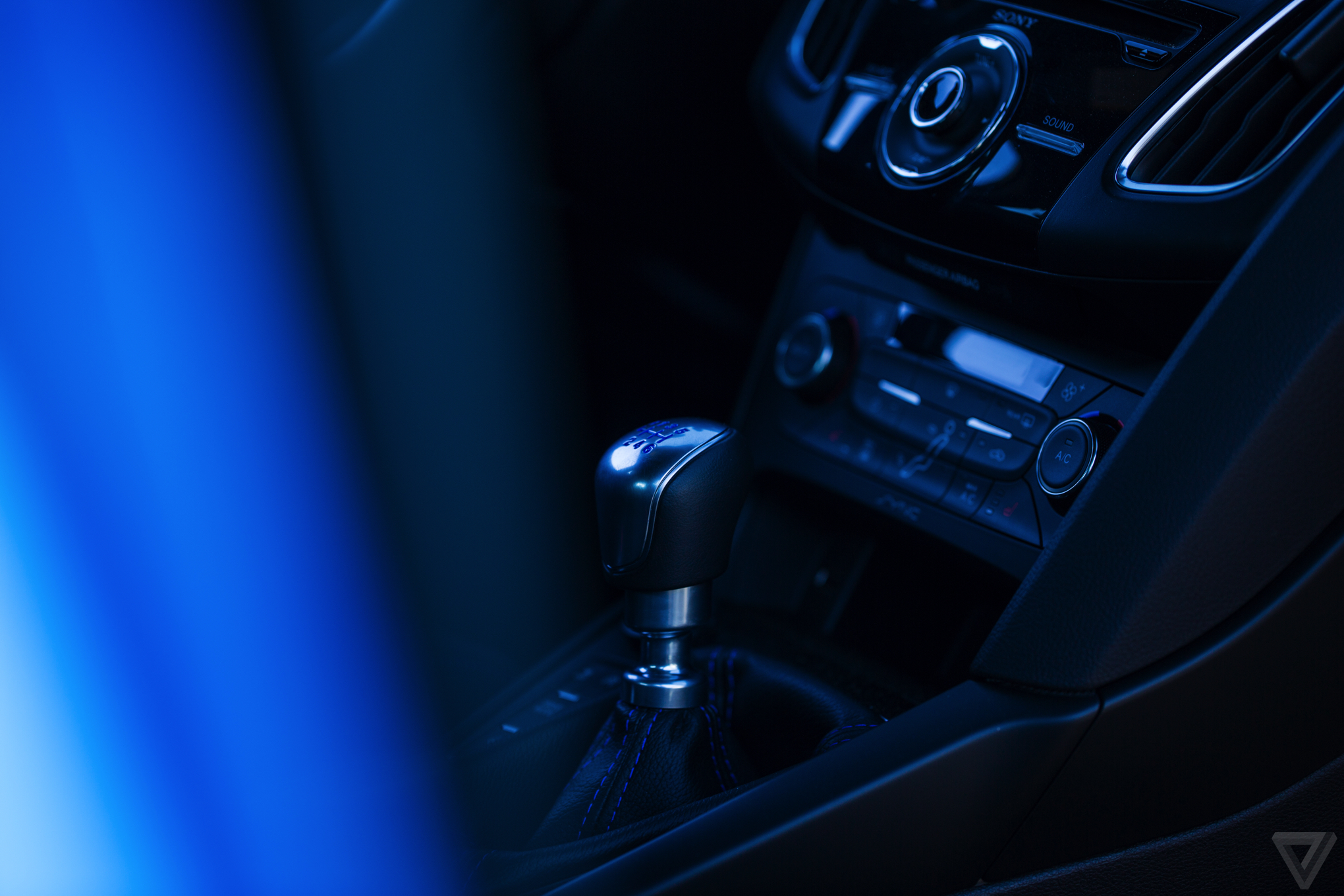 The new RS is a turbocharged monster, kicking out 350 horsepower and an identical amount of torque through a new all-wheel-drive system developed in-house at Ford. It’s bred for the track, meant to deliver killer lap times on dry pavement, though it’ll still be able to handle the white stuff if that’s your thing. On a handful of hot laps around the short circuit at Willow Springs, Ford’s race drivers took the RS to the limit (and once, over it, taking a corner a little too hot and heading off into the dirt) while journalists got time in the passenger seat. In track mode, most of the nanny systems are off entirely or at least liberal in their application. The car slides just enough, allowing for perfect four-wheel drifts.

Unlike many AWD systems which use a bunch of differentials — a box full of clever engineering that helps manage how torque is distributed to the various wheels — the new RS uses something called a power distribution unit to drive the rear wheels. It takes torque from a spinning driveshaft and divides it between the two rear wheels using a pair of clutches — one on each wheel. This allows each wheel to get anywhere from zero to one hundred percent of available torque, depending on conditions and what the driver is trying to do.

In this car, the passenger seat is still pretty great

But that’s not even the really clever bit.

A normal AWD car can understeer under aggressive driving, with the car failing to turn as much as the wheels would like it to. It’s annoying at best and crash-inducing at worst. Ford has solved this problem with the RS by, among other things, allowing the rear wheels to be overdriven. That means the rear wheels are built to spin 1.8 percent faster than the fronts at a given speed. In simple terms, it allows the car to turn into a corner with all the wheels spinning at the best possible speed. And that allows the car to turn exactly where you want without understeer — or with oversteer, which is even better. There’s even a Drift Mode, so you can do your best Ken Block impression. 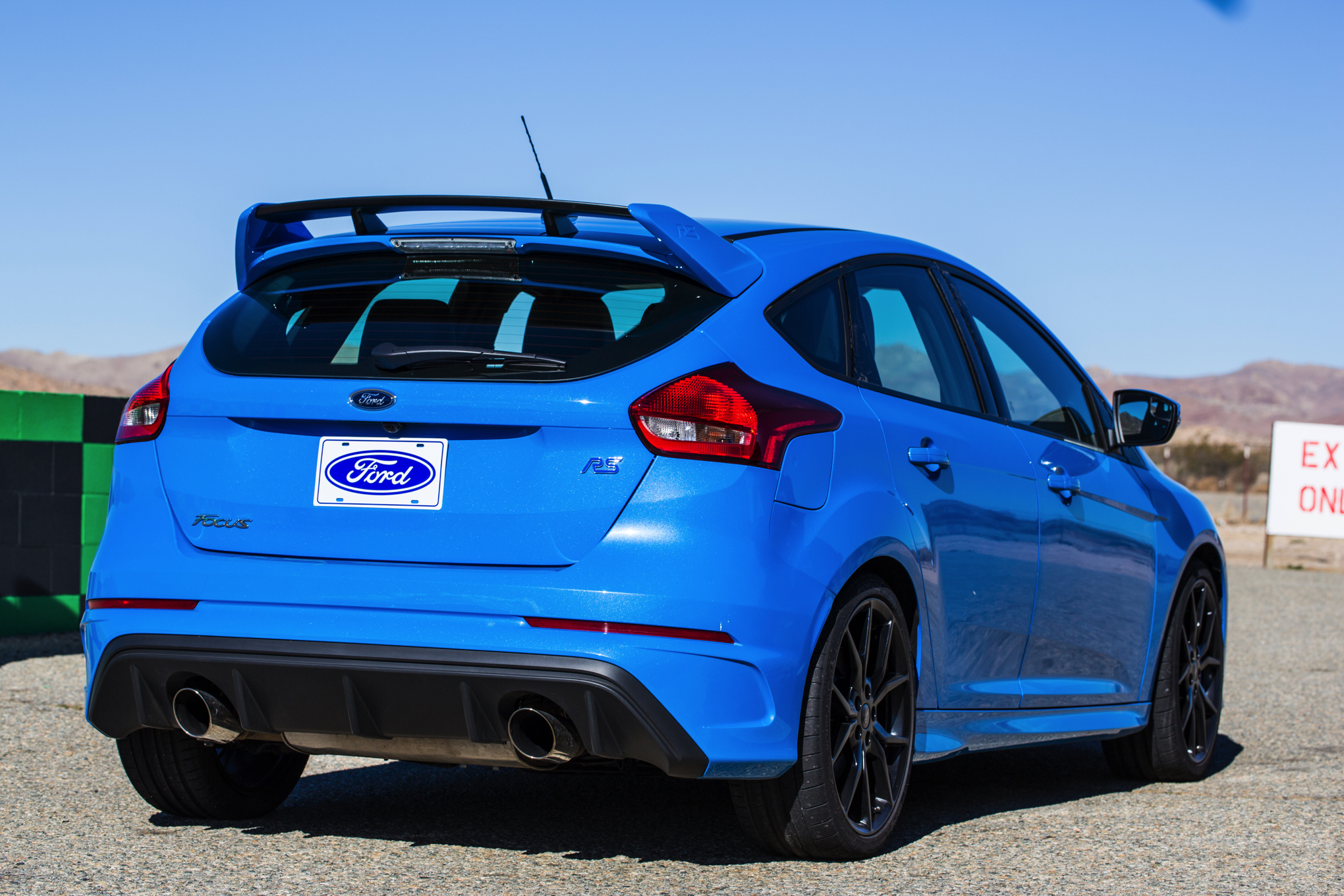 From the passenger seat, the RS was absolutely flying around the track. Clipping apexes, we were executing stomach-turning four-wheel drifts that got the car facing just the right way on the exit. The AWD system lets the driver get on the gas early and use the throttle to control the car. It is, in a word, joyful — and I wasn’t even driving. You can’t help but smile. This is what a hot hatch is all about: getting the errands done but throwing in a little sideways action to keep things interesting. The Focus RS delivers gobs of it.

This car has the largest brakes ever fitted to an RS, helpful if you find yourself entering a corner a little hot. Available Michelin Pilot Sport Cup 2 tires — very, very serious sets of rubber — let you get the most out of your day at the track, maximizing dry grip at the expense of longevity. (Don’t expect these shoes to last 60,000 miles.) With a multitude of driving assist modes, the RS helps more novice drivers when they need it, while allowing hotshoes to fly around the track without the car getting in the way.

Ford’s AWD system allows the outside rear wheel to temporarily receive nearly 100 percent of torque to initiate a drift, then the computers send the appropriate amount of torque to each wheel and keep the drift going. The assembled journalists didn’t get to try Drift Mode (a press drive for that is coming early next year) but demonstrations from Ford's drivers showed just how sideways the RS can get. Spoiler: very.

The RS was absolutely flying around the track

As the most accessible high-performance car in the Ford lineup, the Focus RS is a significant release for the company. It joins the Mustang GT350 and the Raptor pickup truck, along with the forthcoming Ford GT supercar — not bad stablemates. Starting in the mid-$30,000’s, the RS is the top-of-the-line performance car for most Ford customers.

Built at Ford’s plant in Saarlouis, Germany, the Focus RS will have an identical chassis and performance tuning in all markets. Ford engineers told me it would have been impossible to design the new all-wheel-drive system if it was only going to sell it in Europe — the return on investment simply wouldn’t have been there. But, since it will be available in 32 markets including North America, China, and Europe, the company could afford to spend the money to make it great.

We’ll see if it lives up to Ford’s boasting next year, but from my brief time in the car, the early returns are looking positive. The Focus RS will hit dealers in the spring.