Unless you’re an automotive battery technician, a Toyota shareholder, or an environmentalist who still needs to drive to work and can’t justify a Tesla, it’s always been hard to get really excited about the Prius.

Like many Toyotas, the Prius is a perfectly adequate — if a bit boring — way to get around. Everything in the car is compromised in the name of increased fuel economy, and it’s not particularly fun to drive. And millions of Prius owners like it that way, thank you very much. So, fine.

But most of those Prius owners are buying it because of what it delivers (great fuel economy) and the statement it makes to everyone else on the road (I’m greener than you). They couldn’t give a whit about what it looks like on the inside or the outside, so long as it’s green under the hood. And for more than a decade, that formula has worked out pretty well for Toyota and its aforementioned shareholders.

That was then. These days, hybrids aren’t some exotic breed of automobile, relegated to the far corner of the showroom. You’ll be hard pressed to find a major automaker that doesn’t sell at least one hybrid. (Go ahead and try and think of one. I’ll wait.) 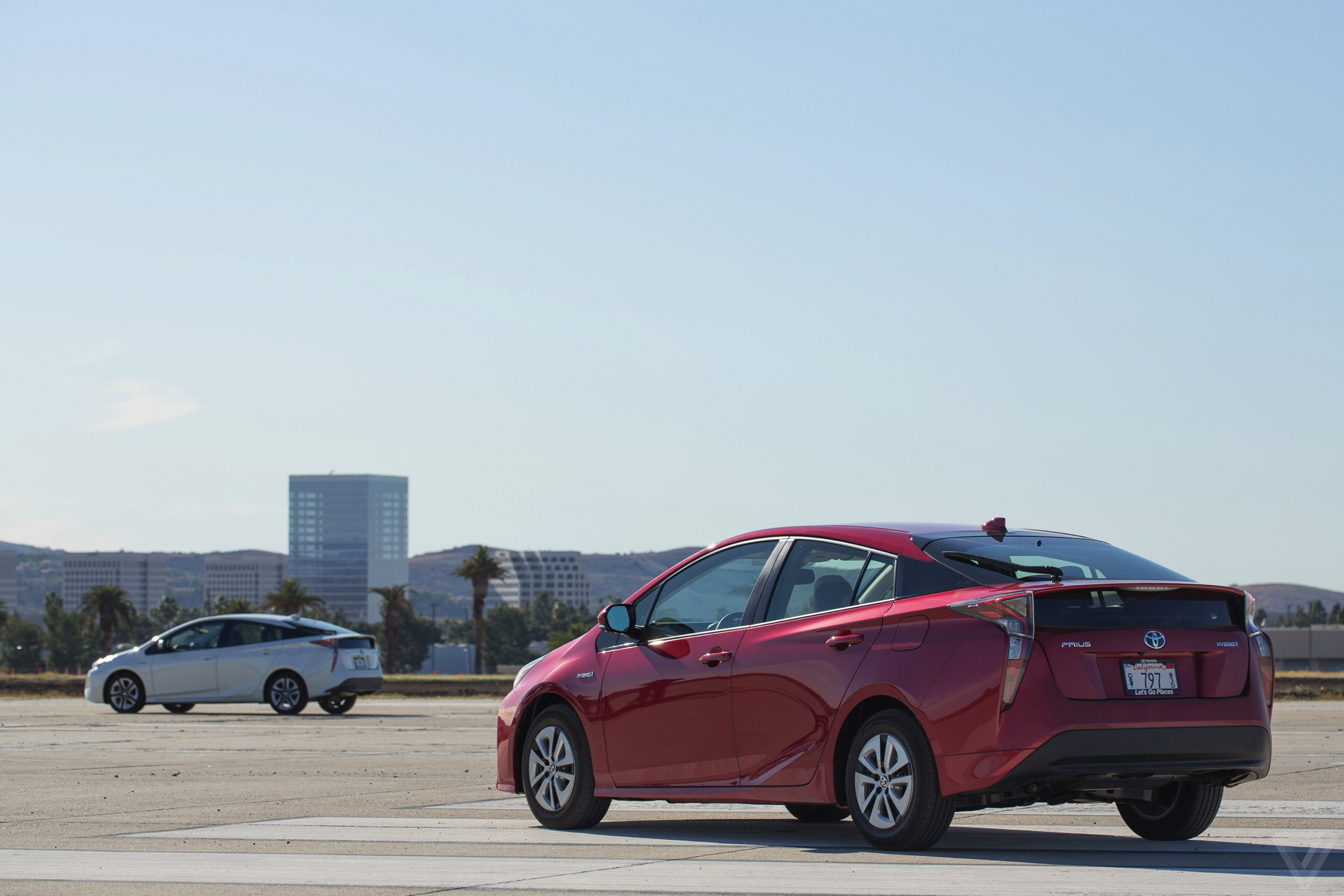 For Toyota, it means sitting back and relying on the Prius name to sell cars isn’t going to work anymore. That’s why the company has totally revamped the 2016 Prius to appeal to more than the environmentally conscious.

It has a new interior that’s clean and fresh. The sharp, angled exterior is lovely (though some, including my photographer, will still have their doubts), especially from the back. And the driving experience, long shoved to the wayside by a Toyota engineering department maniacally focused on optimizing MPG, has been greatly improved.

The driving experience is greatly improved

To show how confident they are in the new chassis’ performance, Toyota even set up an autocross cones course on the tarmac at an abandoned Marine Corps airfield south of Los Angeles (where the LA Auto Show is happening this week, not coincidentally) so the assembled journalists could try out the new car. As you can imagine, autocross with a Prius was gloriously absurd but proved the point: it performs well not just as a Prius, but also as a car. One caveat: the eco-focused tires aren’t great, but they're not for driving hard, they’re built to provide great fuel economy — so we’ll give them a pass.

Sitting in the driver’s seat gives one a commanding view of the road ahead. Huge windows provide great visibility and a minimalist, center-mounted dash at the base of the windshield provides insights into what the hybrid battery system is up to. It’s the same basic setup as the old Prius — all the instrumentation is center-mounted — and it takes a little getting used to. A heads-up display showing speed and fuel economy info in-line with the driver’s vision wouldn’t be a bad addition.

A center console made of what appears to be white refrigerator plastic seems out of place, until you imagine how easy it would be to clean after dumping your too-full coffee into your cup holders by accident. It’s also a little reminiscent of similar interior detail on the last-generation Volt, which could be optioned with a pearly white plastic center stack.

Our tester car had lovely two-tone leather seats that were very comfortable (albeit we were only in the car for a couple hours), but overall it was a pleasant place to be. The infotainment system is the same as in many Toyotas over the past few years, adequate if uninspiring. (And no, annoyingly, you won’t find CarPlay or Android Auto here.) It was incredibly easy to add and delete Bluetooth syncs with my smartphone though, which is not always the case.

The exterior is also vaguely Chevy Voltish, with a high rear deck sloping forward — the common element, of course, is that both cars put an emphasis on aerodynamic efficiency over aesthetics. The new Prius scores a 0.24 drag coefficient, the same as Tesla’s Model S. It’s a bit pointy at the front and there are Cadillac-esque angles all over the place, but the overall effect is pleasing. It’s no Aston Martin, but as with Priuses of old, I doubt many will decide not to buy it because of the way it looks.

In most 2016 models, the hybrid battery pack has been switched from nickel-metal hydride to lithium-ion, like those in your iPhone or the Model S. New hybrid drive components improve electric charging and driving performance, while the new 1.8-liter four-cylinder engine uses exhaust heat to get up to operating temperature more quickly. That helps fuel efficiency when starting a cold engine. See a trend here?

Between the visual improvements, the improved driving experience, and Toyota’s claimed ten percent increase in fuel economy (up to an estimated 54 city / 50 highway / 52 combined), the new Prius deserves serious consideration from anyone on the market for a smallish hybrid – and, if we’re honest, anyone on the market for a small car, period. If you can get beyond the modest price difference, why should someone buy a $18,000 Corolla over a $25,000 Prius?

If I think of an answer to that, I’ll let you know.