While you're scouring eBay for Christmas presents, there are scholars and collectors out there who are keeping an eye out for one-of-a-kind finds. Back in January, Geoffrey Smith, an assistant professor of early Christianity at the University of Texas, came across one such item: a 1,700-year-old papyrus fragment of the Gospel of John. The starting price? $99, no reserve.

The fragment had six partial lines of text on it, written in Greek. It was John I, 50-51, from the New Testament. And searches in a database of known New Testament manuscripts showed no such artifact — this was a "new" find for the scholarly community. 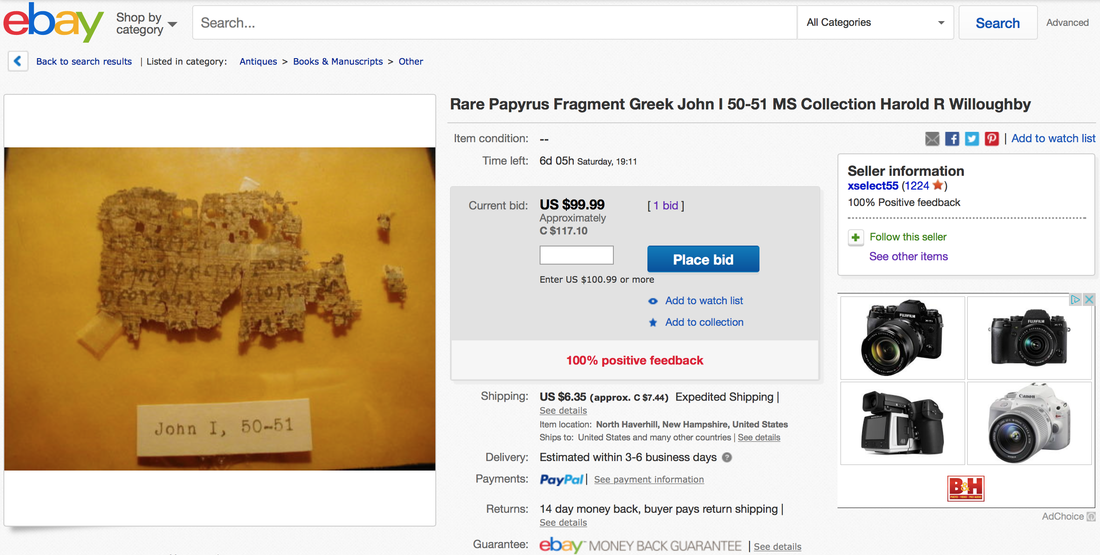 1,700-year-old papyrus was unknown to the academic community

Dr. Smith immediately decided, "This can’t be allowed to sell on eBay ... It will just disappear into a private collection." According to The New York Times, he reached out to the seller and encouraged him to take down the listing. He met with the buyer, who let the researcher analyze the ancient text. Now, the religion scholar is getting ready to publish his research. It turns out the fragment is not just any Greek New Testament papyrus — it's special because it appears to come from a scroll, rather than a codex. Codexes, an early form of the book, was overwhelming used by early Christians — up to 97 percent of all known examples of ancient biblical texts come from such documents.

But where did this eBay seller find such a rare piece? It turns out the fragment came from the collection of Harold R. Willoughby, who was a professor of early Christianity at the University of Chicago. After his death in 1962, his private collection, which included numerous other ancient texts, went into storage. The eBay seller, who is a descendant of the late professor, recently found the small piece of papyrus while going through Dr. Willoughby's old documents.

Now that Dr. Smith has had a chance to analyze the rare find, it isn't clear what will happen to the fragment. The seller has reportedly been "harassed by collectors offering him absurd amounts of money," while Dr. Smith wants him to donate it to a research library. In the end, it might just end up back on eBay after all — though the starting price might be a bit more than $99.