The death of on-demand streaming service Rdio officially began Monday, when the company stopped billing current users and shut down new subscriptions. Acquired by Pandora last week, Rdio will soon transition into a free, ad-supported maintenance mode that will putter along until the service shuts down entirely. Rdio never had more than a fraction of the user base that its rival Spotify did — but it did have tons of great ideas around design and user experience, and its competitors should absolutely steal them.

The more you loved Rdio, the less likely you are to be satisfied by its competitors. Nothing else on the market shares its belief in the primacy of the album, or the cleverness with which it integrated recommendations from friends, trusted labels, and music publications into every corner of the app. But there are a handful of smart things that Spotify, Google Play Music, and Apple Music could learn from Rdio's example. Here's where they should start.

1. Steal its approach to downloads

Rdio let you download an unlimited number of songs to your mobile devices, and you could access all your downloads easily in the left pane of the app. Spotify caps your downloads (arbitrarily, seemingly) at 9,999, and you can only have 3,333 on any one device. And good luck finding them: you have to tap "Your Music," then a category like "songs" or "albums," then pull down another tab, tap the "filter" button, and set to "see only downloaded albums." I get that streaming is the future, but downloads are an invaluable part of the present: wonderful for the gym, the airplane, and not going over your data cap. Spotify ought to treat them like Rdio did: as first-class citizens. 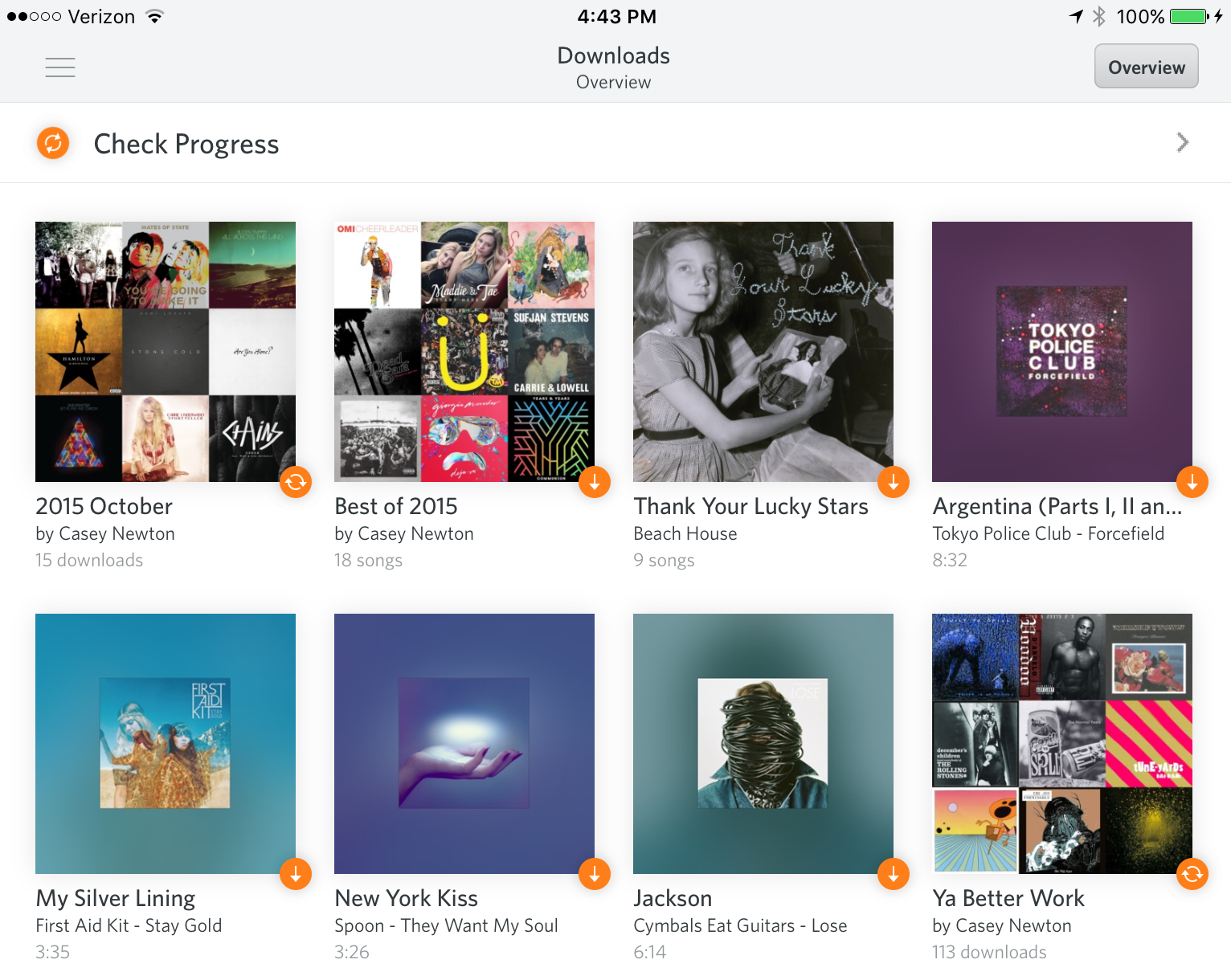 Rdio did a lot of things right, but its approach to the week’s new releases was one of the very best. Visit the app’s New Releases tab and you’d find the albums organized by what your friends on Rdio had already listened to. (Pictures of their faces popped up underneath the album; it was delightful.) It was a simple, elegant way of finding the signal in the noise: a truly personalized feed of recommendations. Other services appear to organize new releases based on global popularity — not a bad approach, but less useful if your taste runs beyond the top 40. 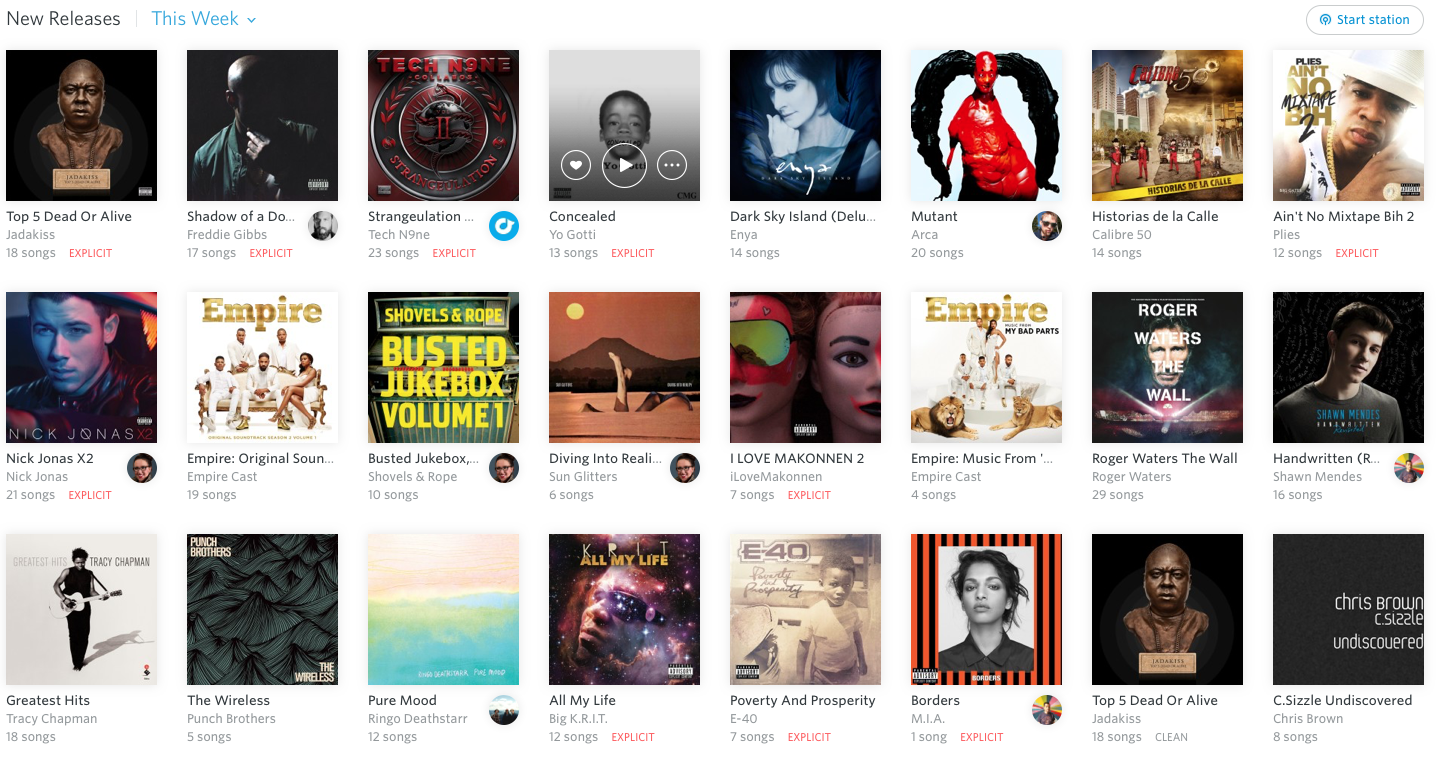 When you signed up for Rdio, it analyzed the music already on your phone or desktop computer and put them in what it called a collection. Then whenever an artist in your collection released new music, Rdio would notify you inside the app. By contrast, Spotify won’t tell you anything about new music from favorite artists unless you’ve visited their Spotify profile and followed them. Rdio’s approach was seamless and made the service feel more personalized. 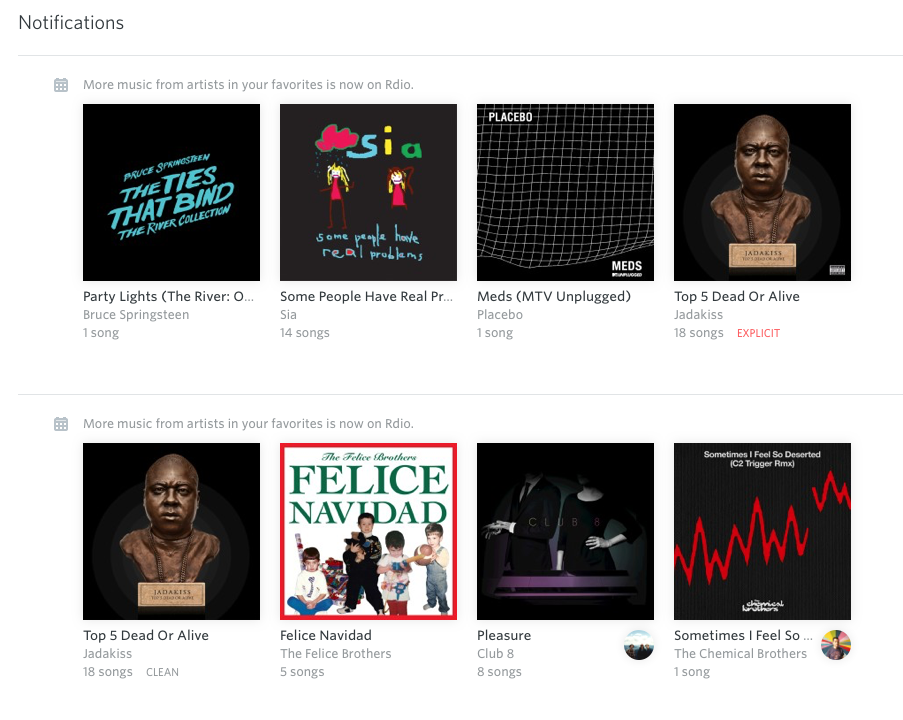 Every time you opened Rdio on your phone, it showed you a section called "Keep listening" that showed you the 10 most recent things you’d listened to, whether they were albums, playlists, or radio stations. Spotify’s answer to this is a feature called "Now" that suggests playlists regardless of whether you’ve listened to them before — which is good for music discovery, but bad for picking up where you left off. I’d love to see Spotify promote access to the music I’ve listened to recently on the first screen I see when I open it. 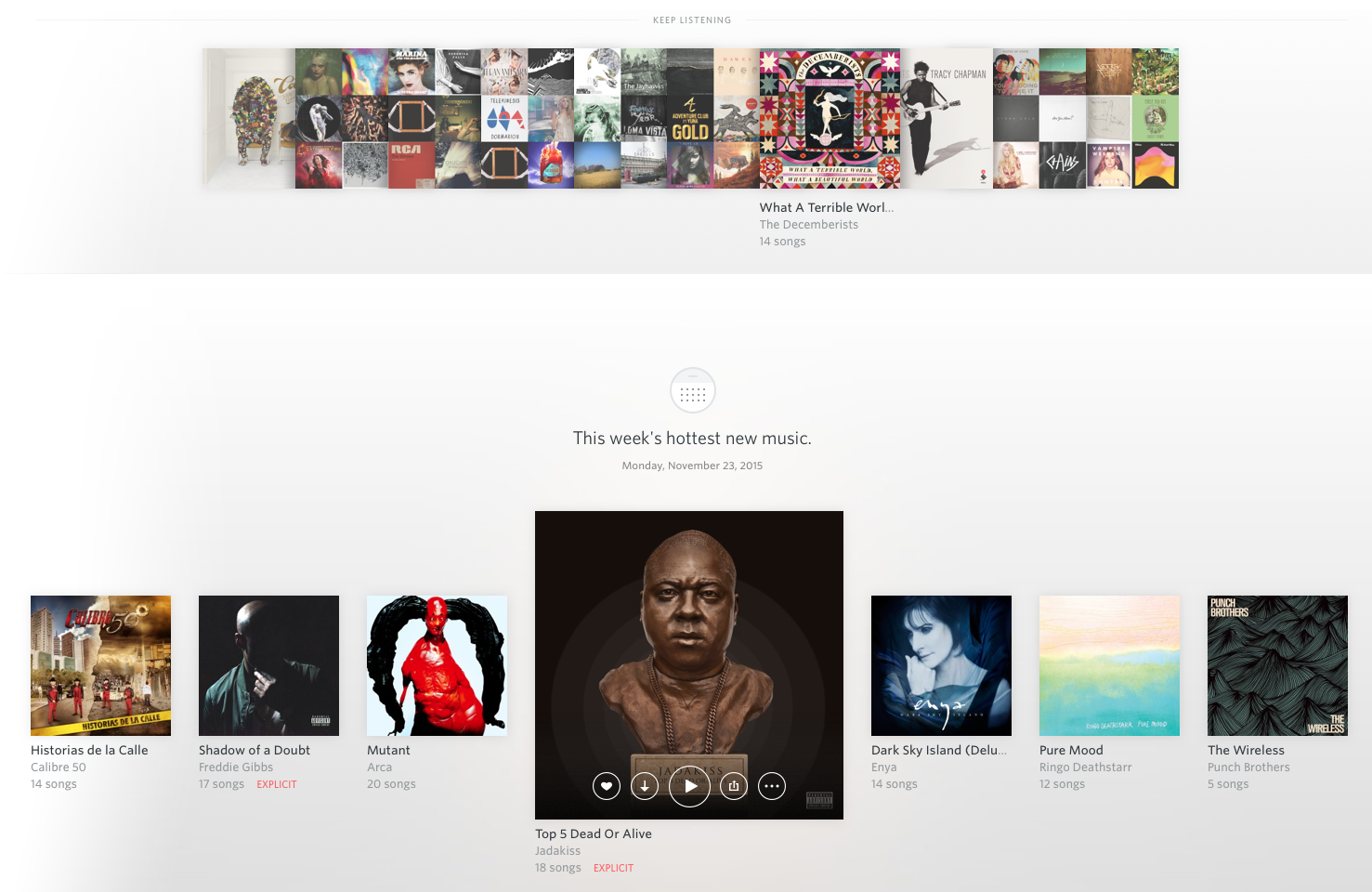 Rdio wasn’t the first to adopt blue and white as its color scheme: you see it in everything from Facebook and Twitter to Dropbox, Apple Mail, and Microsoft Outlook. There’s a good reason for its dominance, though: it’s calm, clean, and encourages a kind of relaxed exploration. Rdio took those colors and applied them to an elegant grid that emphasized big, beautiful album art alongside crisp, easy-to-read tracklists. Contrast that with Spotify’s uggo, inverted mint chocolate chip aesthetic, or Google Play Music’s eye-watering traffic-cone orange. I’d much rather have a classically pleasing design than the different-for-difference’s sake look of Rdio’s competitors. 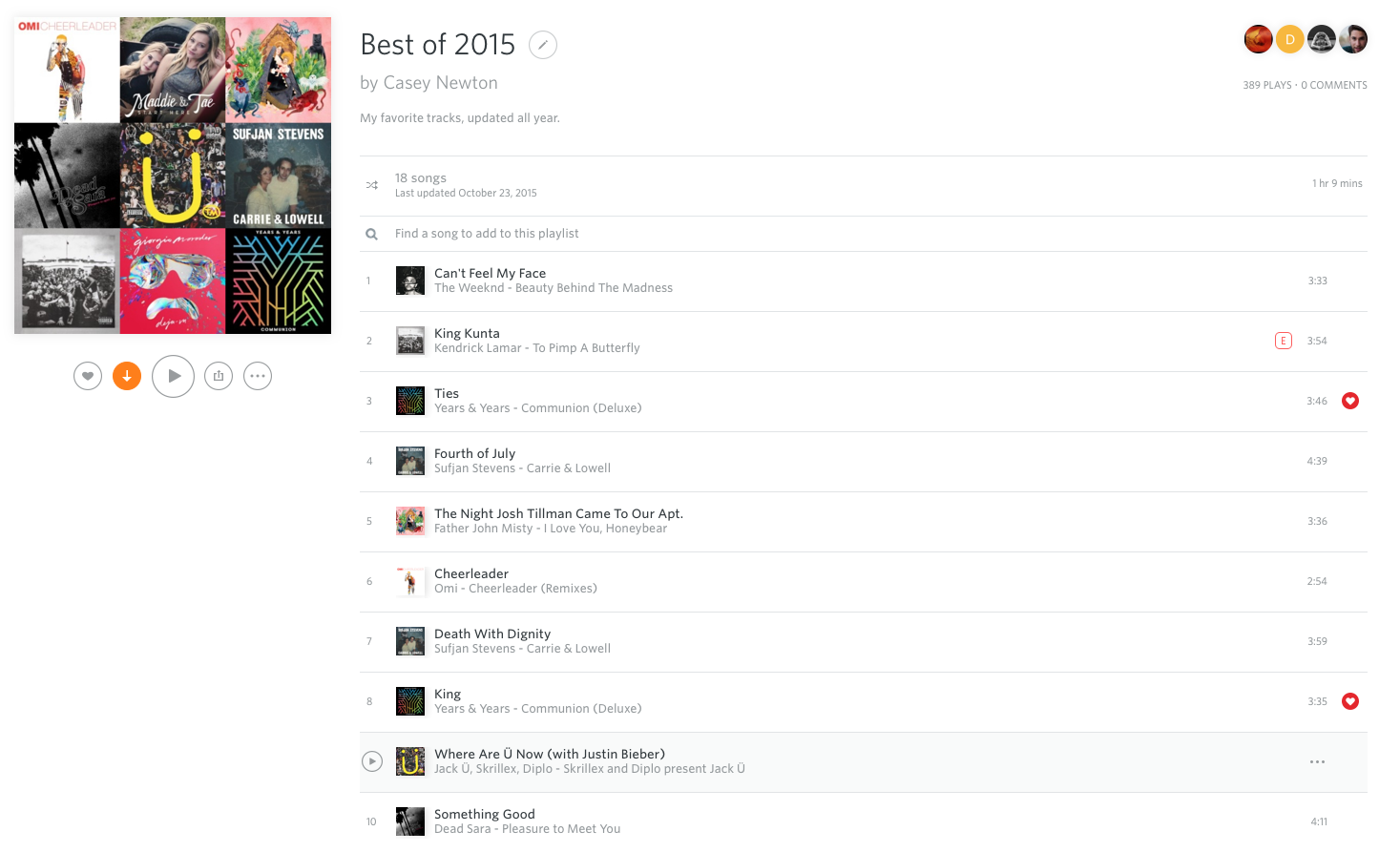 Even if Spotify answered my requests here to the letter, I’d still miss Rdio. It was built to serve a small and shrinking niche: people who like listening to albums start to finish. I listen to music in that way much less often now, in large part thanks to Spotify’s increasingly excellent single-track recommendations. But for an app with so few subscribers, it crammed in an uncommon amount of very good ideas. They are all now ripe for stealing, and I hope that someone will.