When Nokia died (aka got Microsofted), inspired by Elop's 'burning platform' reference, a few sailors jumped into a different lifeboat than Elop was thinking about. They started Jolla, which means a small sailboat, to carry on the work on a Linux based mobile operating system that Nokia started. The OS is called Sailfish, and it's inception is the same story of it's death. When Sailfish OS arose out of the ashes of MeeGo, the UI had to be rewritten, because MeeGo's UI was proprietary. It ran on Linux and a bunch of other Open Source software, but the UI wasn't Open Source. This rewrite is what Jollas CEO Anti Saarnio call's the first 'valley of death' that the company went through. They lost a big part of their OS and had to rewrite it because of licensing issues.

Fast forward to today, Jolla is bankrupt and it's future is questionable. About a year ago, the Finnish company started a crowdfunding campaign to ship a tablet. Those tablets have not been shipped and probably never will. Today, the CEO released a note to the backers that included this graph: 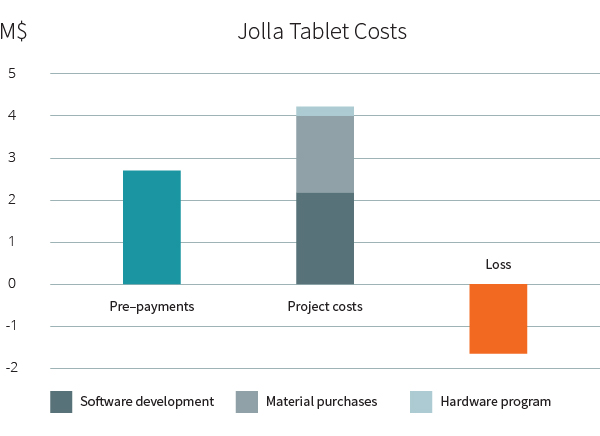 Jolla used the money they got from the crowdfunding campaign not to build tablets, but to build Sailfish OS 2.0. At some point, they decided they do not want to be a consumer facing company selling Hardware to support Software development, but an OEM facing company, selling software licenses to device makers. And because of that decision, they are now dead and backers don't get their tablets.

In order to appeal to OEMs, Sailfish OS had to be improved. To make money from it, it had to be proprietary. Both facts directly lead to the failed tablet campaign. If Jolla had focused on getting the tablets out there, they would have spent the crowdfunding money on manufacturing the devices. But that would have meant that the OS would not have been improved that much and it would have shipped buggy and missing features.

But here is the thing: the people who backed Jolla are not regular consumers, but mostly hackers themselves. Jolla could have shipped a buggy product - but by simply open sourcing the whole OS, the backers would have stepped in and put in the work to improve the OS.

Jolla didn't do that, because they decided the wanted to sell proprietary Software. Sadly, there are no buyers and so now they are dying. When Jolla decided who they want to be, they made the wrong decision. It cost me 200 bucks.