I would have killed for a tarantula as a child.

Tarantulas are furry, they come in way more colors than the capybara, and they're very, very strange — what's not to love! I never did receive one, to my sister's great relief, but I'm still thankful for these amazing creatures. That's why the publication of a blue tarantula study this Thanksgiving week, in Science Advances, feels fitting. In it, scientists show that despite the vividness of their coloration, the blues that tarantulas sport aren't all that iridescent, at least not to human eyes. This means that these colors don't change in intensity or hue when they're seen from different angles, the way most structural colors do in nature. And that's intriguing news — even for people who don't think tarantulas are cute bundles of joy. Figuring out how tarantulas pull this off might lead to less energy-intensive wide-angle displays for phones and computers.

It's possible that tarantulas use this color to signal to prey or predators instead, but that's still a mystery. All scientists can say right now is that this color probably serves an important purpose for these tarantulas. "Something must keep the colors consistent across their long evolutionary history," says Bor-Kai Hsiung, an arachnologist at the University of Akron in Ohio, and a co-author of the study.

To find out more about the "tarantula blue," researchers used different microscopy techniques to analyze tarantula hairs. They found that although these species share a shade of blue, tarantulas don't use pigments to produce it. Instead, the blue colors are produced thanks to nanostructures in the spiders' hair, which reflect blue light. And these nanostructures differ between species, the scientists found. Most importantly, however, these blue colors don’t change intensity or hue as the viewing angle changes. That's a big differentiator from the highly iridescent structural colors seen in most birds, butterflies, and beetles.

"This potentially makes tarantulas a really important model for designing color-producing technology for TVs, phones, and other devices that are easier to look at," says Todd Blackledge, an arachnologist at the University of Akron who worked on the study. 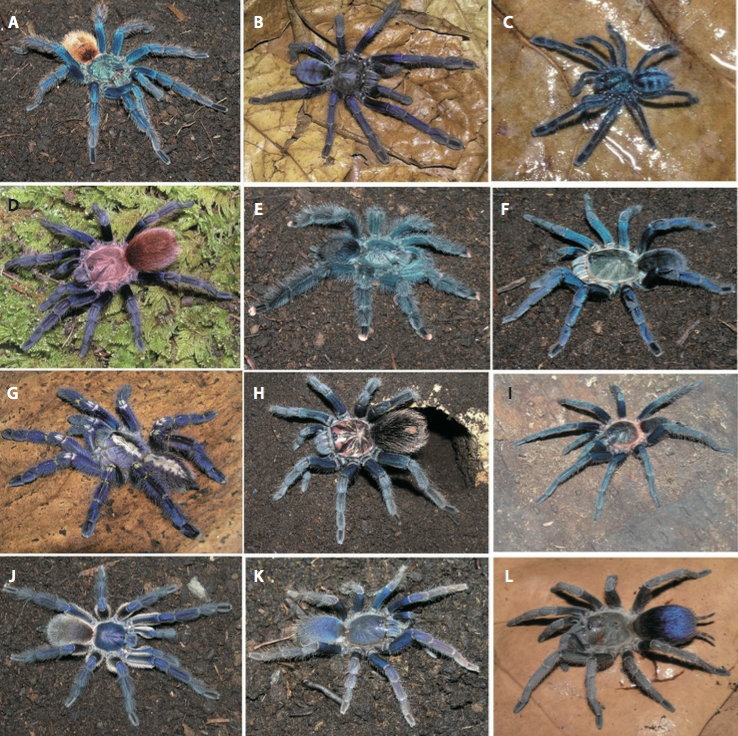 Those applications are still a long way off, however. Even though the researchers know which structures are used to create this effect, they don't know how to reproduce it — that's what they're working on now.

By producing synthetic structures that mimic tarantula hairs, the researchers think they could figure out how these arachnids reduce the iridescent effect that's typical of most animals' structural colors. "If we can figure out how tarantulas achieve that, it will solve one of the biggest constraints for structural color applications," Hsiung says.

"They are the iconic 'creepy crawly' pet to most people," Blackledge says. "But to arachnologists, they represent a very important step in the early evolution of spiders — we can learn a lot by studying them," he says.