Last week, residents of North Memphis, Tennessee, woke up to what most people would consider a pretty creepy surprise: a half-mile-long spider web on the grass near their homes. Local news station WMC Action News 5 reported that "millions" of spiders had "infested" one of the city's neighborhoods. But what this story more accurately reveals is just how little humans know about their surroundings; after all, this spider population was probably living alongside local Tennesseans well before the web blanket appeared.

"It's a mass dispersal of the millions of tiny spiders that have always been in that field, unnoticed till now," Memphis Zoo curator Steve Reichling told WMC Action News 5.

Juvenile spiders float away from their families

What the people of North Memphis witnessed was almost certainly a "ballooning event." This term refers to the moment when spiders — normally young ones — float away from their families using silk threads that "may be over a meter in length," Susan Riechart, an arachnologist at the University of Tennessee–Knoxville, told The Washington Post. Favorable air currents and warm weather may have spurred these spiders to take off all at once. "You need a relatively calm air or a slight breeze — ballooning doesn't happen often in wind," Richard Bradley, an entomologist at Ohio State University, told Scientific American in 2012. "The rising air currents created by the sun heating the ground are the launching force for these tiny flights." 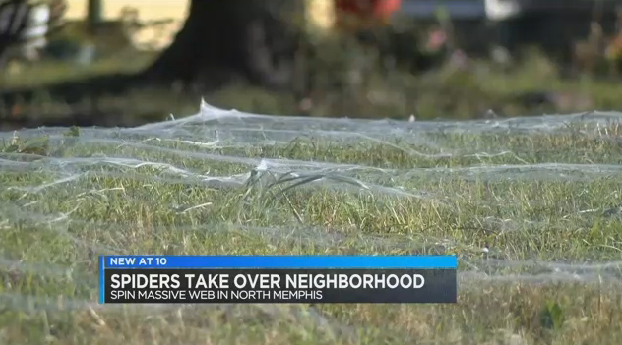 Because this kind of dispersal depends on air currents, spiders don't have much control over where they land. In this case, a large amount of spiderlings appear to have landed in the same area — an area that's probably close to the patches of grass from which they took off.

If this evokes memories of the children's book Charlotte's Web, you're on the right track. That, too, was a ballooning event — although Charlotte's hatchlings probably weren't part of the same species as the spiders in North Memphis. Charlotte's full name was "Charlotte A. Cavatica," a reference to the barn spider Araneus cavaticus.