NASA scientists have a new device up their sleeves to help find life on other planets. The rectangular box is being called the "Chemical Laptop," but it's really more of a portable, automated chemistry lab that can be built into future NASA rovers.

The Chemical Laptop has one primary goal, according to NASA: to find molecules associated with life. Specifically, it's designed to find amino acids and fatty acids, which are key to proteins and cell membranes, respectively, in life here on Earth.

Samples obtained on Mars or elsewhere need to be dissolved in water before they can be analyzed. The Chemical Laptop uses something researchers are likening to an espresso machine to heat up and dissolve the samples in water. Dyes and other chemical additives will be used to help mark molecules in the samples, and anything that's obtained will be analyzed by a laser in the device. 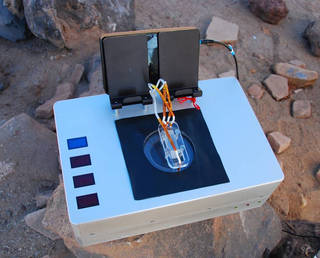 But the tool won't just be able to tell if there are amino acids or fatty acids on an alien planet. It can determine additional information that could help determine whether those amino acids actually came from a life form.

It can tell if amino acids came from life forms

A particular amino acid can come in either a left- and right-handed variety; the two versions, called enantiomers, have identical physical properties, but they are mirror images of each other. Here on Earth, life has evolved to almost exclusively use the left-handed versions. Many biological reactions will retain the "handedness" of a molecule — for whatever reason, left-handed came to dominate life that we know. But it's equally possible that right-handed amino acids could dominate life on another planet. What's not likely is that an alien life form would use an equal mixture of the two — if a sample contained an equal mix, the molecules probably didn't come from life.

Since the left- and right-handed versions are so similar, they can be difficult to distinguish — especially on a faraway planet. To solve this problem, some of the dyes used by the Chemical Laptop only work with left- or right-handed amino acids. That will then let researchers see the composition of a sample, and determine if it's likely life existed on the planet.

Jessica Creamer, of NASA's Jet Propulsion Laboratory, says in a statement that if an excess of one was found, "That would be the best evidence so far that life exists on other planets." She added that the Chemical Laptop "would be the most sensitive device of its kind to leave Earth," if and when it's implemented on future missions. So far, a version of the device has already been demonstrated here on Earth — now it just needs its chance in space.