In a year where the word "mixtape" has been stretched like taffy to describe releases of widely varying length and ambition, there’s something refreshing about Erykah Badu’s minor new tape But You Caint Use My Phone. There’s no pretension or delusions of grandeur about its 11 tracks, many of which live in a liminal space between covers, interpolations, and original compositions; they’re tossed-off and proud of it. Badu, producer Zach Witness, and their collaborators recorded the tape in a Dallas bedroom studio in just under two weeks, and it radiates domestic warmth and good humor. Badu’s son Seven could be gritting through homework in an office next door; his father André 3000 could be laying down a verse nearby; the rapper ItsRoutine (aka Aubrey Davis), who shows up on a few tracks to perform an uncanny impersonation of Drake c. Thank Me Later, could be making a sandwich in the kitchen down the hall.

Badu’s relationship with the world's most popular rapper is fascinating both creatively and personally; it’s a connection defined by dialogue rather than linear influence. Badu’s extended cover of "Hotline Bling" — retitled "Cell U Lar Device" here — gives But You Caint Use My Phone its concept and serves as its core. But they go back further than the cover: Drake visited Seven at his elementary school at Badu’s invitation; she was a presence in the studio for Take Care, the 2011 album that turned a young talent into a figure at hip-hop’s vanguard. He came over for tea and advice. 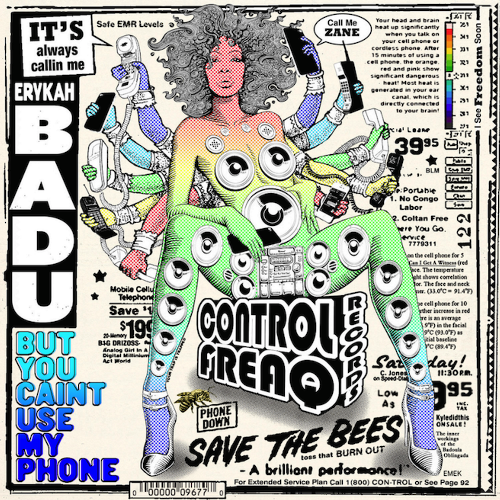 The sampled roots and rounded edges of the original "Hotline Bling" owe a debt to Badu’s fine 2010 LP New Amerykah Part Two (Return of the Ankh), and in covering the song she replaces his trademark concern trolling with an actual, hysterical hotline. ("If you’re calling because you just saw her on BET, MTV, or any other social media outlet, and you’re checking to make sure you’re still in good standing, press 3." Take note, Iggy Azalea.) Her decision to deploy a fake Drake (the aforementioned ItsRoutine) on "U Use to Call Me" and the first half of "What’s Yo Phone Number" / "Telephone (Ghost of Screw Mix)" when the real one probably would’ve been happy to participate sits somewhere between a hat tip, an eye roll, and a jovial prank.

Conspicuous absence aside, the 6 God should be thanked for inspiring Badu’s dive into the last 40 years of phone-centric music. She places "Hotline Bling" beside Usher’s "U Don’t Have to Call," New Edition’s "Mr. Telephone Man," and Todd Rundgren’s "Hello It’s Me" via the Isley Brothers. These interpretations give her room to wander into rhythmic pop, quasi-chillwave, and astral, airy folk-soul. When André 3000 wanders out of the wilderness for a typically slippery verse and duet with Badu on closer "Hello," Badu’s scattered meditations on connection and disconnection start to click into place. When you work to maintain relationships with the people you love or once loved, they transform before your eyes over the years. They bear surprising fruit. These aren’t new themes for Badu. Time, feeling, identity: they’re all amorphous.

Badu understands the power of intimacy

The music of But You Caint Use My Phone is less exciting than its structure and its personality. Badu understands the power of intimacy, and she knows the tape’s looseness and repetitive elements are strengths rather than weaknesses. Listening to her as she dips in and out of ideas and flips through songs she likes enough to reinvent means becoming a guest in her world. The discrete compositions — even the album-worthy ones like suggestive single "Phone Down" and the bubbling, jazzy "Caint Use My Phone (Suite)" — matter less than the fluid, flexible whole.

If you find yourself returning to the tape again and again, it won’t be for the hooks, or because you still haven’t quite wrapped your head around it. It’s a chance to spend time with a wise, funny friend, someone who’s comfortable in her own skin and still curious about the world and the people who make it. There are worse ways to spend a Sunday morning.