Inside New York City's East Side Access, the biggest transportation project in America

One hundred and fifty feet below the streets of midtown Manhattan, hundreds of construction workers are toiling away at America’s largest and most expensive transportation project. The Metropolitan Transportation Authority’s $10.2 billion East Side Access connects Grand Central Station to the Long Island Rail Road, the busiest commuter rail system in the country, via a new 6-mile-long tunnel. When finished, it’s expected to serve 162,000 commuters every day. But don’t hold your breath: that won’t happen until December 2022.

That’s 17 years after major construction began in 2007, and decades after a tunnel was built under the East River for this exact purpose, which serves as a reminder that not only is East Side Access the nation’s biggest and costliest transit project, it’s also one of its most over-budget and behind-schedule projects as well. And with the nation in the grips of an infrastructure crisis, with roads, tunnels and bridges crumbling all across the US, East Side Access could help inspire more confidence that things can improve, if the MTA could just finish the damn thing.

That cynicism melts away, though, when you see the grandeur and scale of the project with your own eyes. On Wednesday, for the first time in two years, the MTA gave a tour to a few dozen journalists and photographers to provide an update on the project, but also to assure the public that yes, it is real and it is happening. 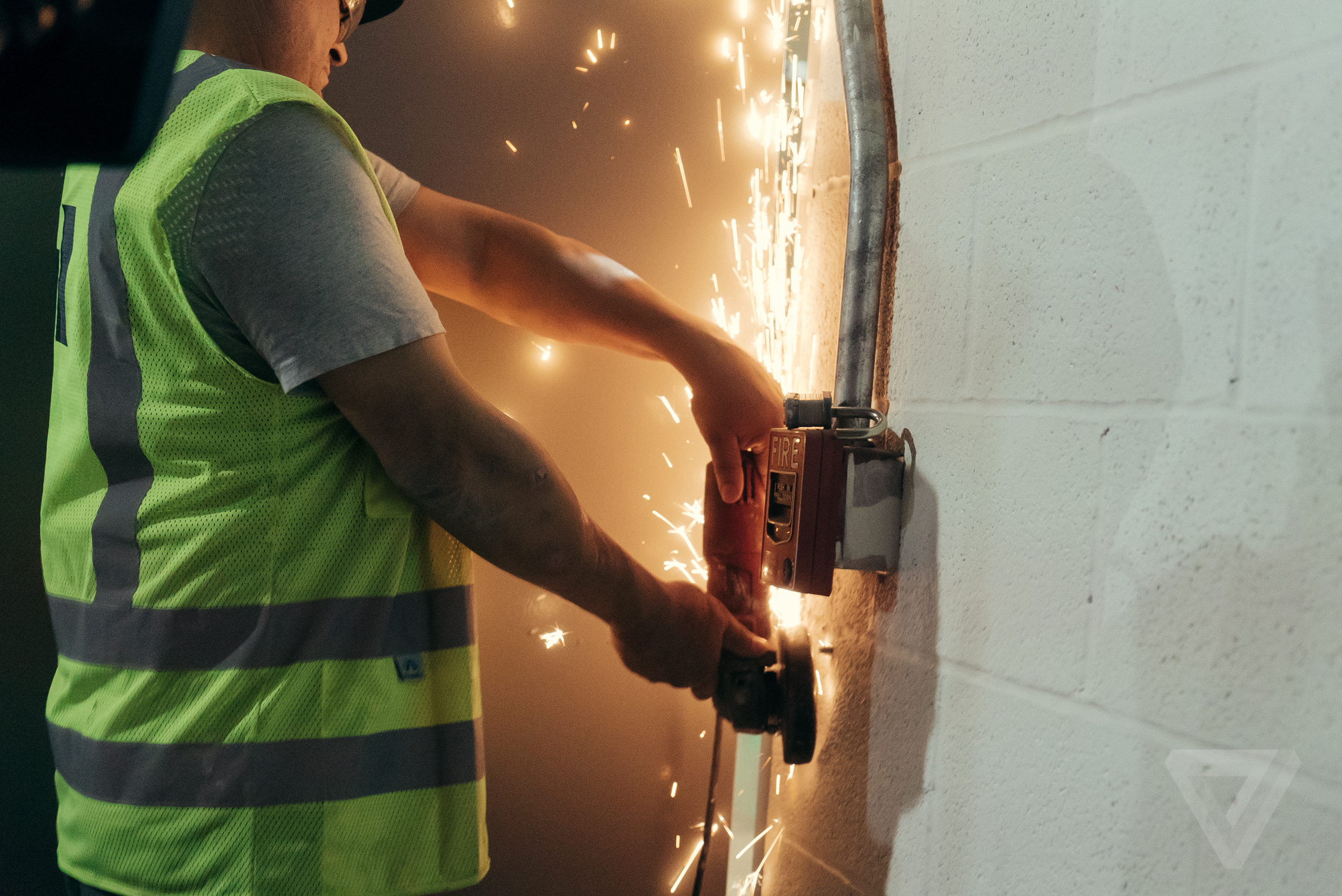 After a safety presentation, we donned our hardhats and orange safety vests, threaded through the mid-morning crowds of Grand Central Station, ducked behind some inconspicuous plywood, and began making our way through an active construction zone. In total, the LIRR station at Grand Central will be 350,000 square feet, with two upper platforms, two lower ones, and a mezzanine.

The air thrumming with the noise of heavy machinery, construction workers milled about, studying blueprints and hammering steel rods into the frame of a gigantic hole through which seven escalators would eventually connect the mezzanine to the platforms below. Dr. Michael Horodniceanu, the MTA’s chief engineer and head of capital projects, wiped his brow and said, "This is a project of historical proportions."

After descending over 10 stories in the orange elevator, Horodniceanu led us through a muddy, dimly lit tunnel to the project’s most breathtaking sight: the massive Eastern Cavern. Over 1,100 feet long, seven stories tall, this space took almost four years to create. Tunnel-boring machines blasted through the 350 million-year-old rock to carve out the space through which four railroad platforms will eventually be built, two on top and two on bottom.

Some critics say it has been eclipsed by other priorities

Past a pair of industrial fans, there's another tunnel, this one lined with yellow, waterproof PVC rubber, stretched north. Water dripped from the ceiling as workers using soldering tools sent orange sparks flying. There, Horodniceanu was asked why the project was so expensive and taking so long.

Let’s back up. The MTA has been thinking of ways to bring the LIRR into Grand Central Station since the 63rd Street Tunnel under the East River was finished in 1969. Currently, commuters from Long Island are dumped unceremoniously at Penn Station, which some argue is the nation’s least attractive, most impossible-to-navigate transportation hub. By creating a new access point at Grand Central, the MTA says some commuters will save 40 minutes on their daily commutes.

But some critics say the megaproject has taken so long, it has been eclipsed by other priorities. Nicole Gelinas, a transportation and finance expert at the Manhattan Institute, writes in next month’s City Journal: "Cost overruns and delays on big projects are common. But New York State’s Metropolitan Transportation Authority, which builds and operates the subways and rails in and around New York City, hasn’t just run over its allotted budget and projected timeline; it has obliterated them. The unexpected billions that New York now has to pay are harming the state’s ability to build even more important transit infrastructure to serve the city’s growing population."

In addition to East Side Access, the MTA is currently building the Second Avenue Subway, the first major expansion of the city’s subway system in over 50 years but one that has languished on the drawing board for almost twice that long. Meanwhile, transportation officials in New York and New Jersey continue to wrangle over the aging and crumbling 105-year-old Hudson River tunnel between their states, which carries over 150,000 passengers every day. The current crossway is expected to fail sometime in the next 20 years, but funding has yet to be secured for a new one. President Obama has called it the most vital infrastructure project in the country. The fact that construction hasn’t started on a replacement bodes ill for the hundreds of thousands of New Jersey residents who commute into New York every day.

It was supposed to cost $4.3 billion when it was first proposed

East Side Access was supposed to cost $4.3 billion when it was first proposed. That ballooned to $6.3 billion in 2006, $8.4 billion in 2012, and is now expected to cost $10.2 billion. Horodniceanu said the cost could be chalked up to New York City’s reputation as a high-cost town. "We’re actually paying our people well — I’m talking about the labor," he said. "And that’s reflected into the cost."

But Horodniceanu said the project was now on budget, and expected to remain so until it was open for business. Besides, the costs were justified when you consider that New York City, and the US as a whole, in competing daily for business with other first-world countries around the globe. A transportation infrastructure that isn’t a complete disaster is vital component in that competition. And nothing is guaranteed.

"This a very complex project," he said as he stood in a small pocket park on 50th Street, after emerging from the depths. He likened it to changing a flat tire on a bicycle while still riding — building a colossal rail station without disrupting regular train service. "But I think most of the challenges are over at this point. So that’s where we are."

Dr. Michael Horodniceanu, president of capital construction at the MTA, led the tour of East Side Access on Nov. 4, 2015.
Most Popular
From our sponsor
Advertiser Content From