Does the world need a ginormous tablet designed almost exclusively for streaming movies and TV shows? After spending a good week with Samsung’s 18.4-inch Galaxy View, I can say that the answer is no. But Samsung’s idea isn’t altogether crazy; most of us don’t have TVs throughout the house, so a semi-portable device that can be carried from room to room could prove appealing to some consumers. Unfortunately, the company’s execution is too flawed — and at $599, priced far too high — to make the Galaxy View worth recommending.

Samsung actually doesn’t want you to call the Galaxy View a tablet. Setting everything else aside, the product’s sheer size and non-removable handle / stand make jokes and ridicule inevitable. If the iPad Air is what you can tote around in your bag or inconspicuously read on the subway, this is the exact opposite of that thing.

It’s big, and at over 5 pounds, let me tell you, it’s heavy. There’s no such thing as laying the Galaxy View flat. Depending on how the handle is situated, the tablet can be oriented in one of two ways; its regular tent position props the device up on a table — this is how you’d use it most often — or you can open the handle and rest the View on your lap, which could be useful when you want an up-close look at an app or game. When you’re carrying it around, the Galaxy View almost looks like a weird suitcase, and the weight distribution is a bit odd; it feels like the screen is constantly trying to pull away from the handle.

For better or worse, there's no other tablet like this

As you'd imagine, the Galaxy View is dominated by its 18.4-inch, 1080p display. Right off the bat, I have to say I'm rather disappointed. Samsung says it chose a 1080p screen since that's the resolution best optimized for movies and games. That could be a reasonable argument, but it still results in a viewing experience that's subpar compared to many of today's top smartphones and other flagship tablets — even the company's own Tab S2. Sticking with 1080p is also another decision that makes the Galaxy View's $599 price tag pretty baffling to me. You're not exactly paying for a breakthrough, ultra-sharp panel here. If you're sitting at normal distances (remember, you're likely to use this as a tiny TV more so than a tablet), video from apps like Netflix and Sling TV looks acceptable. But up close, pixels are plainly apparent. 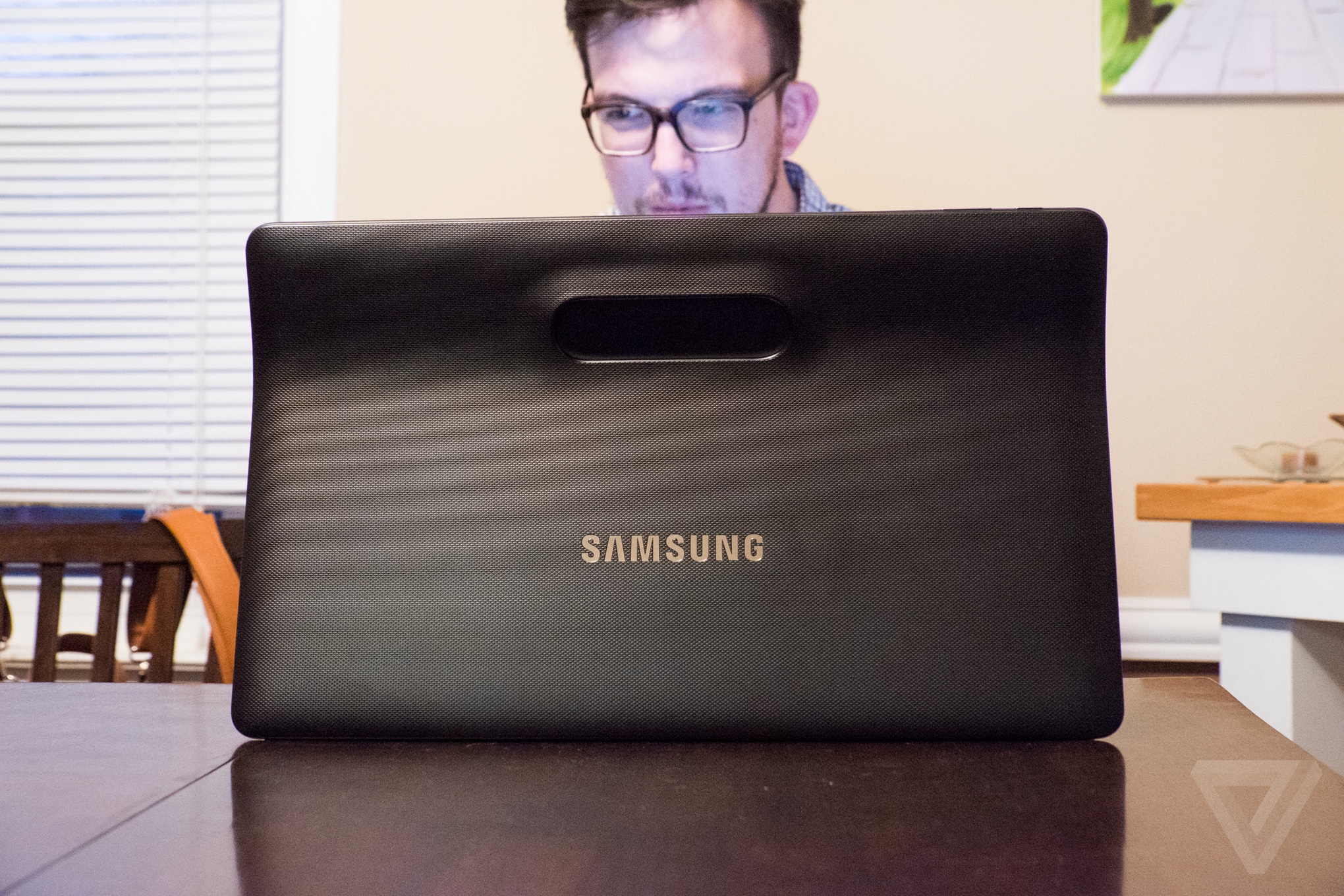 Power the Galaxy View on and you're met with Samsung's typical tablet user interface with one major change; there's a custom home screen that's tiled with popular video apps. Here you'll find some obvious choices (Netflix, Hulu, YouTube) along with popular TV-centric apps like Watch ESPN and CBS All Access. The top left corner is reserved for apps from your cable company — assuming you've got Time Warner Cable, Comcast, or DirecTV. If not, you'll have to download your provider's app and access it on the more traditional TouchWiz home screen one swipe away. 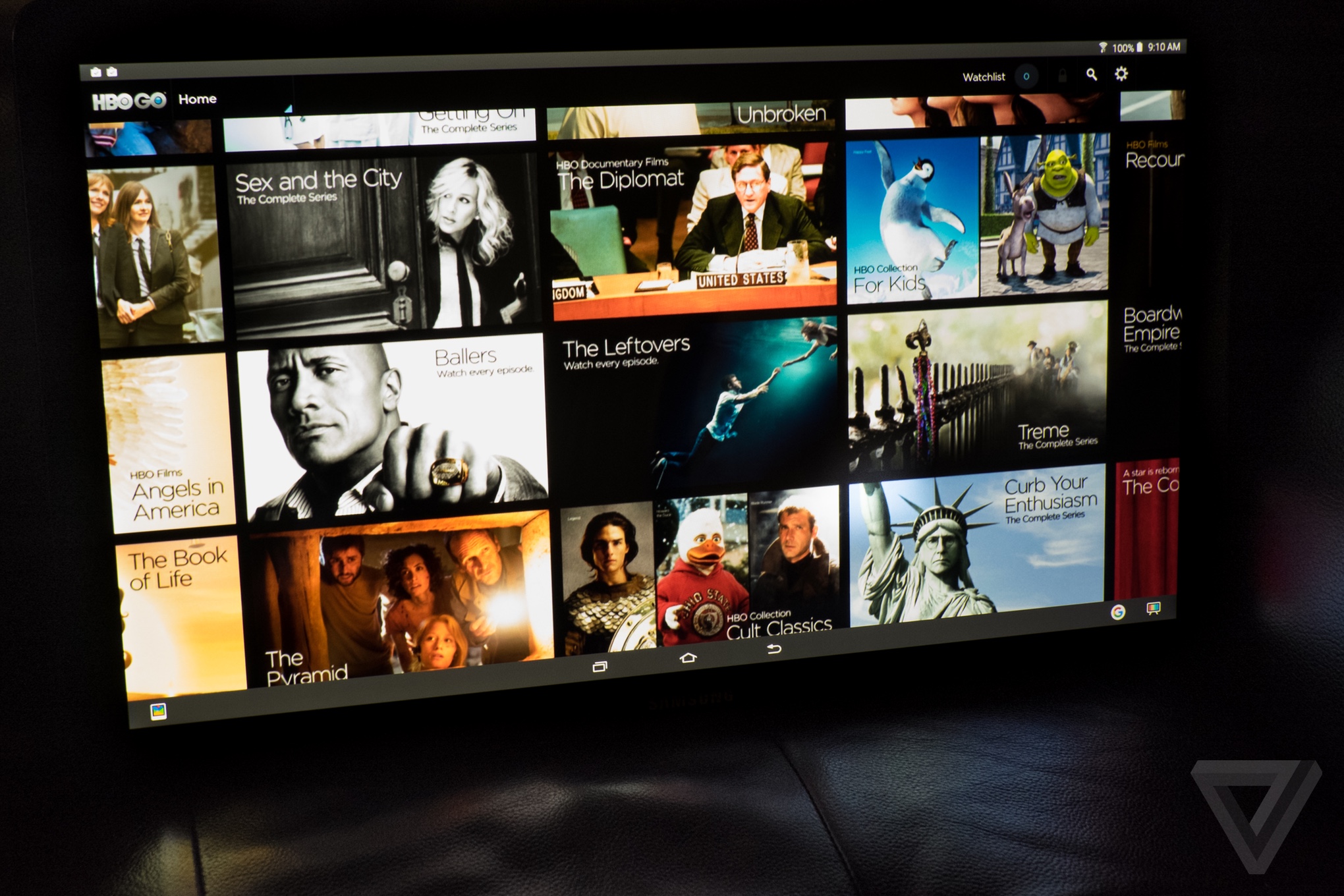 Bizarrely, absolutely nothing on the video-focused screen can be switched or moved around, meaning you'll have to hop between it and the next screen over if you want to open HBO Go, Sling TV, or other popular video apps from TV networks. It's not that annoying, but I wish Samsung had just made the whole thing more customizable so that users could set up the View's home screen just the way they'd like.

Aside from that unique layer of software, there's little differentiating the Galaxy View from Samsung's other tablets. You can run apps side by side or open the company's SideSync software to interact with your Galaxy smartphone, and there are a handful of other Samsung-made apps that most people will never bother opening. Inside, the Galaxy View is powered by an octa-core 1.6GHz Exynos chip and 2GB of RAM. Performance is generally okay, but the RAM can limit the View's multitasking abilities. Samsung probably doesn't see that as a problem since it's marketing this as the ultimate streaming tablet.

Even so, this hardware isn't exactly top-of-the-line, leaving me even more confused about why this thing costs $600. Where is the price coming from, Samsung? The Galaxy View could maybe find some niche success if it were $300 or $400, but at $600, I think Samsung has effectively priced it to fail. It's definitely not all bad. Even if the internals aren't top-rate, battery life came close to Samsung's 8 hour estimate. (You charge with a dedicated power adapter, not over USB.) The built-in speakers sound decent enough, and there's also a microSD card slot in case you favor playing your own files instead of streaming movies and shows.

I think Samsung's premise here is a bit of a misfire. People already use their tablets at home more than any place else, and no one was really asking for a jumbo-sized one. Tablets are great because they have mobility and versatility when the need arises. The Galaxy View just isn't immersive or captivating enough to make up for what's lost there.

I'm not taking points away from the company for trying new things or attempting to build an altogether new TV / tablet hybrid, but a big screen alone isn't enough to take us there. This very much feels like an Android tablet with a huge display, crazy handle, and some video apps tossed in. If it were priced $200 lower, maybe you could come up with some use cases. Bring it into the backyard on a nice day. Buy one for your kid going to college, or swap out an old TV taking up a ton of space for something like this that can be hidden away when not in use. But I can't imagine many people are going to bother sinking $600 into Samsung's experiment.