An experience worth having

In the basement of a posh London hotel today, you'll find the world's most outlandish headphones. They are not portable or, at €50,000, particularly affordable. With the new Orpheus, Sennheiser is shrugging off the usual design constraints of budget and convenience, and has built a set of headphones with just one goal in mind: being the absolute, undisputed best. I don't know that there will ever be such a consensus in audiophile circles, but having listened to the Orpheus today, I can say that they are indeed extraordinary.

Sennheiser introduced the first Orpheus in 1991, limiting it to 300 units and pricing it at a mighty $16,000. You'd be lucky to find a set for double that price now, with those headphones' quality being widely recognized, appreciated, and desired. In that context, the price tag of the new Orpheus model, pushing close to $55,000, isn't quite so outrageous. They're not limited in production numbers, but Sennheiser says it can only build 250 sets per year, owing to all the handmade components and assembly required.

If you're looking at the photos and wondering if that's a base made out of solid marble, let me assure you that it is. Axel Grell, one of the engineers in charge of the Orpheus project, personally went to Italy to select the stone that felt just right. The obsessive attention to detail and excessive spending continues with the Orpheus' built-in digital-to-analog converter (DAC). There's not just one, but eight, with four parallel channels per ear used to reduce distortion and noise levels. Housed inside the marble is a vacuum tube pre-amp, which has a little party trick up its sleeve. When you turn the system on, the tubes (along with the control knobs on the front) rise out of the base and then glow invitingly.

The power amp is actually contained within the ear cups, These are electrostatic headphones, meaning they have no magnetic drivers inside them, and instead they produce sound by placing a static electric charge on an ultrathin diaphragm. In this case, it's platinum-coated, because of course it would be. The cables leading up the Orpheus headphones are made of silver-plated, oxygen-free copper. Using aluminum for the cooling fins on the outside of each ear cup feels almost pedestrian by comparison. 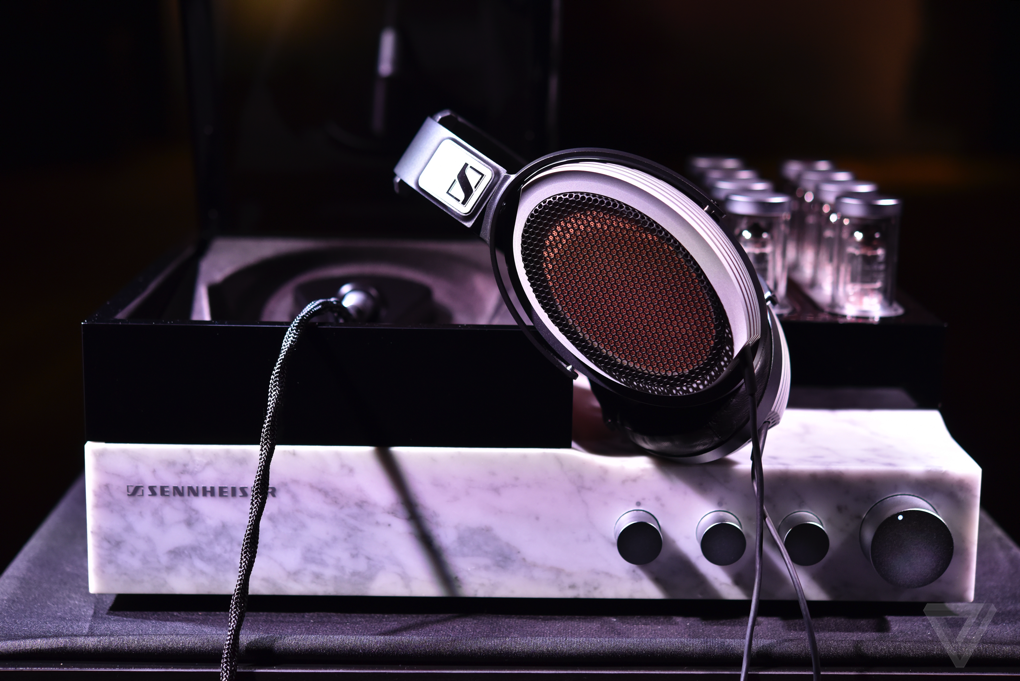 The ear pads are made out of handmade leather and feel fantastic. The first thing that impressed me about the Orpheus — and no, I wasn't overwhelmed with a sense of luxury from the marble base or chrome-plated brass knobs — was just how comfortable they were to wear. Most headphones make me wonder if I have an abnormally shaped head with their wonky ergonomics, but I only put the Orpheus on once and never had to adjust the set after that — they wrap perfectly around the ear, and their weight is well distributed to allow for extended listening sessions.

As to the listening, well, there may be a placebo effect from paying close attention to the music and knowing just how expensive the Orpheus are, but I really can't find a single fault with them. Every little detail in the recording is there, and when you turn the volume up, you just get more of it. There's no audible distortion or imperfection. Pink Floyd's "Shine On You Crazy Diamond" is simply incredible on these headphones — it's so pure that I can visualize the guitar strings being plucked. And orchestral music like Bizet's Carmen is just as spectacular.

Forget practicality, this is about purity

In building the new Orpheus, Sennheiser set out to assert its technological leadership and to make a statement. It has certainly done that. These are more than just headphones, though — they are an experience, composed of many fancy materials, a decade of development, and an unrelenting pursuit of pure sound. There's no sensible way to judge the value of these Sennheisers. They are obviously not 50 times more awesome than the company's flagship HD800 headphones, but then a Bugatti isn't a dozen times better than a Ferrari either. If you've got the money to spend on a very expensive toy that also happens to be technically and functionally outstanding, the Sennheiser Orpheus is certainly a good candidate. Preorders will open at the beginning of next year, in a choice of black or white marble, with deliveries expected in mid-2016.