We’re living in a golden age of media. There are more distribution channels for books, music, TV series, and films than at any time in history, and more new media coming out on those channels than ever before. It's only natural that the more we become used to rapid access, freedom of choice, and not being buried in obsolescing objects, our relationship with books, DVDs, and CDs becomes increasingly dependent on streaming service subscriptions and e-readers.

Gifting electronic files, or memberships that allow access to them, solves that problem. But it can also make considerate gift-giving pretty unsatisfying. As The Verge’s 2015 holiday gift guide notes, you can’t really gift-wrap a Netflix stream. It’s hard to put MP3s under a Christmas tree. Gift cards are the most flexible gift, but they have a rep as the laziest one as well. So giving a loved one iTunes credit or a Spotify membership may be giving them the gift of choice, but it also feels like handing them a generic plastic chit in lieu of something heartfelt. And it’s impossible to know whether a recipient will ever get around to using that credit on something meaningful. One estimate claims that between 2005 and 2011, $41 billion in gift cards were purchased, but never redeemed.

At the same time, digital media can make buying physical media as a gift seem wasteful or pointless. Giving someone a single $30 audiobook may feel chintzy and limiting when the same $30 could buy two months’ worth of access to 180,000 audiobook titles via Audible. And once a book is read, a movie is watched, or the files from a CD are downloaded, the object itself may feel disposable or even burdensome. The entire purpose of giving art as a gift is to share what’s meant to be an emotional experience. But that intent can be undercut by a piece of potentially dust-collecting junk.

Still, we film, music, book, and comics lovers know we'll always want to give those experiences to the people in our lives. So here are a few solutions for how to make media-gifting personal and meaningful in the digital age.

Most people can't afford to buy Wu-Tang Clan's single-copy, million-dollar album to ensure that they're giving the hip-hop fan in their life something distinctive. (Besides, it already sold out.) But there is something to be said for collectible and limited-edition media, and the way special releases like KimchiDVD's specially packaged steelbook Blu-ray packages, or ultra-deluxe limited editions of albums, can make an ordinary release feel like an elaborate sensual experience. For people who care about collectability, rarity, or just the feeling of having something that isn't automatically disposable, limited special editions offer the feeling of digging deeper into a favorite media experience than the average Netflix stream or randomized Pandora channel. The collectible experience is for people who care enough about physicality and ownership to embed themselves in it.

Not all Alien fans are created equal

But the collectible experience is generally pricey, and it requires a lot of confidence in your knowledge of the recipient. The seven-disc Alien Anthology box set might be a great present for the Alien fan who wants to watch every deleted and alternate scene, making-of featurette, and updated revised edit in the Alien series. But it's a lousy present for someone who isn't particularly interested in all that technical nitty-gritty, no matter how many times they've dressed as Ripley for Halloween. And if you're going to pay extra for the white-wax edition of the White Album for the Beatles fan in your life, it's worth knowing whether they consider it the group's best or most pretentious release.

Of course, not every unique product needs to be a fancy multi-disc package that demands considerable shelf-space real estate. Consider giving fans something they can't copy and discard at home: a live experience. If you can afford it, get concert tickets for a favorite group, instead of an album. Or reserve seats at an upcoming special film screening — especially if it involves a live element, like the Sing-Along Sound Of Music, or a one-night-only outdoor screening of a favorite movie. If you want to go bigger, find out if your local independent cinema or revival house offers fancy membership packages. Give them theater tickets, or even a season subscription. Book a trip to a local Escape Room or improv show.

With tickets, there's an implied "Let's do this together"

Individual event tickets involve more obligation on the recipient's part than handing them a CD — it's best to choose something as far in advance as possible, to prevent scheduling from being a problem. And they may involve more obligation on the gift giver's part, too, since in some of these cases, there's an implied "Let's go do this together." This option may work best for couples, or for parents trying to pry teenagers away from the computer, or for close friends looking to do something together. But that shouldn't be considered a disadvantage. The more media viewing becomes a private home activity instead of an out-in-the-world activity, the more isolating it can become. Turning entertainment back into a live, interactive experience lets gift givers share a present with a recipient in a way just handing them a graphic novel or Hulu Plus gift card doesn't. 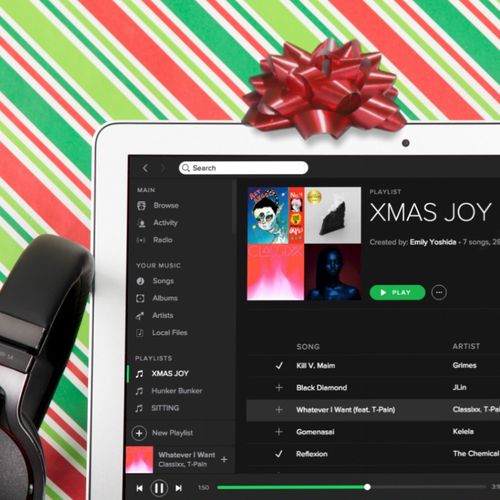 Give the gift of personal curation

Not everyone has the time or the taste for the more social experience of live theater or live music. And "let's share an experience" isn't tenable for people who have difficult schedules, or are living in different cities. If flexibility is a must, there another solution: go with the seemingly easy gift card experience, but personalize it. Give someone an Amazon Prime membership, but package it with a list of your top streaming picks, extolling the virtues of Transparent or The Man In The High Castle. Give a comic book rookie a Marvel Unlimited subscription (under $5 a month during "Cyber Week"), with a guide to five or 10 favorite titles or issues. Foot the bill for three months of Netflix, then point them toward Sense8 or Jessica Jones or 30 For 30, according to their tastes. The main problem in the digital age isn't access, it's figuring out where to start on services that offer thousands of titles. A little guidance could be very appreciated.

And wrapping that gift card or access code or email in a personalized letter is a long step toward making it feel more like an unwrappable, physical item. It's also a way to share a media experience without imposing one. Giving someone a single book or movie can feel like assigning homework, especially if it's something the giver loves and the receiver hasn't seen before. Giving someone upward of 10,000 movies, on the other hand, can feel overwhelming.

Just remember that advice about where to start on a service is just advice, and it turns into an obligation if it comes with nagging or expectations. "I think you'll love Hulu Plus' streaming access to the Criterion collection, especially the Three Colors trilogy," is kind and caring guidance. "Have you watched Red yet? Why not? You'd love that film! You need to make time for it!" probably qualifies as harassment.

Give the gift of an ongoing conversation

One advantage to physical media is that it has a physical presence: that book is sitting on the coffee table, obviously waiting to be read. DVDs and CDs are solid, present reminders of what's up next in the queue. But recipients have to actually remember to sign into a service and use their gift credit, or skim through the list of available media and build a queue. Every time someone logs into Amazon to buy toilet paper, the site may remind them that they have Prime and could be watching The Hunger Games: Mockingjay — Part 1 free. But most streaming services don't call users up on a regular basis to remind them to try something new.

An ongoing subscription can be an ongoing bonding experience

So buying someone into a subscription service — especially someone less tech-savvy — should be a bit of a package deal that involves helping them use it throughout the year, by bringing new album releases to their attention, or watching something with them from time to time. The fun of a streaming-media membership plan is that it's an ongoing gift. It can be an ongoing bonding experience, too; it may be just the thing to form a connection with that relative you don't talk to nearly enough. Whether that means sitting down to watch a new series together or just alerting someone else to the latest issue of a comic you love, giving someone an all-access pass to an online library of media can be a way to bring you closer throughout the year, and give you something to talk about and someone to share favorite things with. (Again, remember that suggesting media and nagging about it are two different things.)

Remember the golden rule of gifting

Let's be fair: not all holiday gifts are meant to be meaningful. For the obligatory co-worker gift or required family present, a neutral book or simple gift card still may be an entirely appropriate present. The difficulty is in meaningful gift-giving for meaningful relationships.

But one thing the digital age hasn't changed at all is that considerate gifting is still about exhibiting some knowledge of the recipient's tastes. Ultimately, what most people above Santa-belief age want from a gift is a feeling that the gift giver knows and cares about them. Which means no matter how rare or elaborate or expensive that Nakatomi Plaza-shaped Die Hard limited-edition collector's-edition five-Blu-ray set is, it still isn't a mindful present for someone who just purged their entire movie collection. The thoughtfulness of a gift isn't measured in cost, or in the medium. It's in how much it acknowledges a connection.

In the digital media age, that may not just mean knowing whether a friend would prefer a copy of It Follows or Pitch Perfect 2. It might mean figuring out whether they're more likely to use a Netflix membership, or some RedBox credit. Whether GameFly is a dream service, a hassle compared to Steam, or completely irrelevant as long as Blizzard keeps pushing out new games and updating its existing ones via BattleNet. It also may mean accepting that some people do still prefer physical media — the smell and heft of actual books, the dependability of discs that don't rely on a vigorous Wi-Fi connection, the simple feel of actual ownership.

But as with any gift, you will never be able to totally control how much someone likes the thing you got them, whether they ultimately do use it, and whether it becomes an important part of their life. With digital giving, as any kind of giving, it's important to remember that the thought counts. Do what you can to give them something they'll remember and love. And if it doesn't take, there's always next year. In the meantime, you have your own Netflix queue to catch up on.