The weirdest Windows phone in years comes from Japan

Microsoft’s first Lumia smartphones running Windows 10 Mobile have just landed, but we’re yet to see much in the way of third-party support for the new OS. That might not be much of a surprise; big-hitter Android OEMs like Samsung and HTC haven’t paid Windows Phone much attention in years, and they were some of its bigger supporters.

That’s not to say there won’t be any offerings beside Microsoft’s own, however, and the past week has seen some emerge from the unlikeliest of countries — Japan. Microsoft’s failure with Windows Phone here almost makes its local Xbox efforts look like a success; after a single Windows Phone 7 handset from Toshiba and Fujitsu flopped, the entire platform has been dead on arrival. But two Windows Mobile 10 handsets have gone on sale in Japan in the past few days: there’s the entry-level ¥12,000 ($104) Katana 01 from Freetel, and electronics retailer Yamada Denki’s ¥39,800 ($324) EveryPhone, which at 6.9mm thick has the distinction of being the thinnest Windows phone ever.

Both of those devices are pretty uninteresting beside their novel combination of software and origin. But now there’s a Japanese Windows phone with a unique design, from a company that’s never even made a phone before. Meet the NuAns Neo. 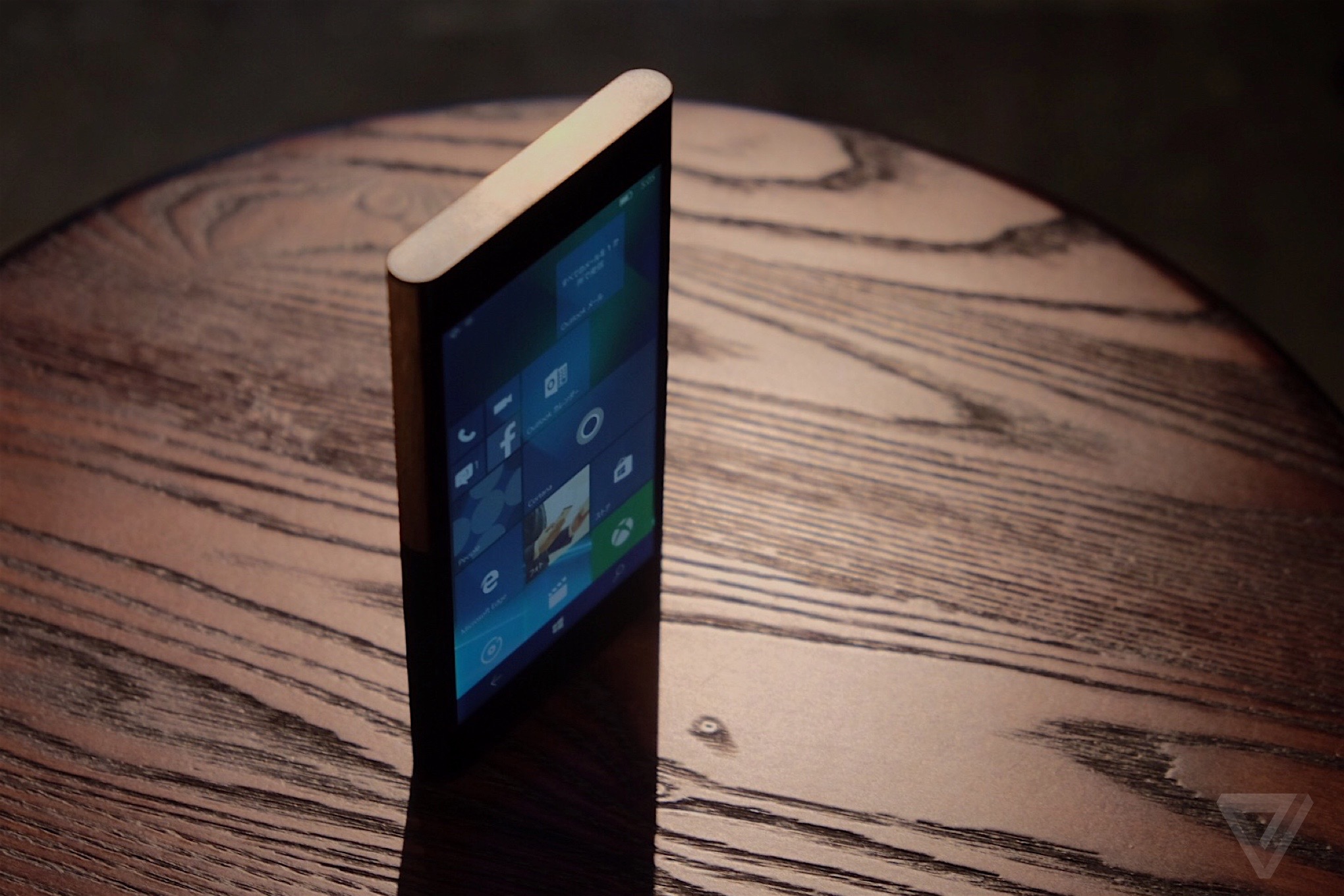 The NuAns Neo doesn’t look like any phone released in the past few years. Its chunky 11.3mm-thick frame marks a deliberate attempt to step out of the thinness arms race, and its mix-and-match snap-on covers — in materials like wood and ultrasuede — make it clear that this is more than just a rebranded reference design.

An attempt to step out of the thinness arms race

The Neo is a really nice phone to hold. That’s not to say it feels expensive — it doesn’t have the cold, sleek aluminum of an iPhone or the futuristic glassiness of a Galaxy. But the notable girth is refreshing after years of progressively skinnier smartphones, and the Neo sits in the hand very comfortably. And although the basic construction of the phone isn’t anything special, the way the back cover wraps around the side means your hand is always in contact with the material you’ve chosen. Even the unfinished pre-production models feel more like a product you’d find in Loft or Muji than a typical phone carrier store.

But why is an unorthodox new Windows phone popping up in Japan, of all places? Surprisingly, it’s down to the company’s iOS heritage. NuAns, which means both "nuance" and "new answer," is a new brand that represents a collaboration by Simplism and Tent, two sub-brands of a small Japanese company called Trinity. Simplism is one of the most well-known iPhone accessory brands in Japan, and Tent makes a variety of neat household items with a typically Japanese aesthetic. (Yes, the designers are well aware that the naming of their new phone amounts to Trinity releasing Neo.) 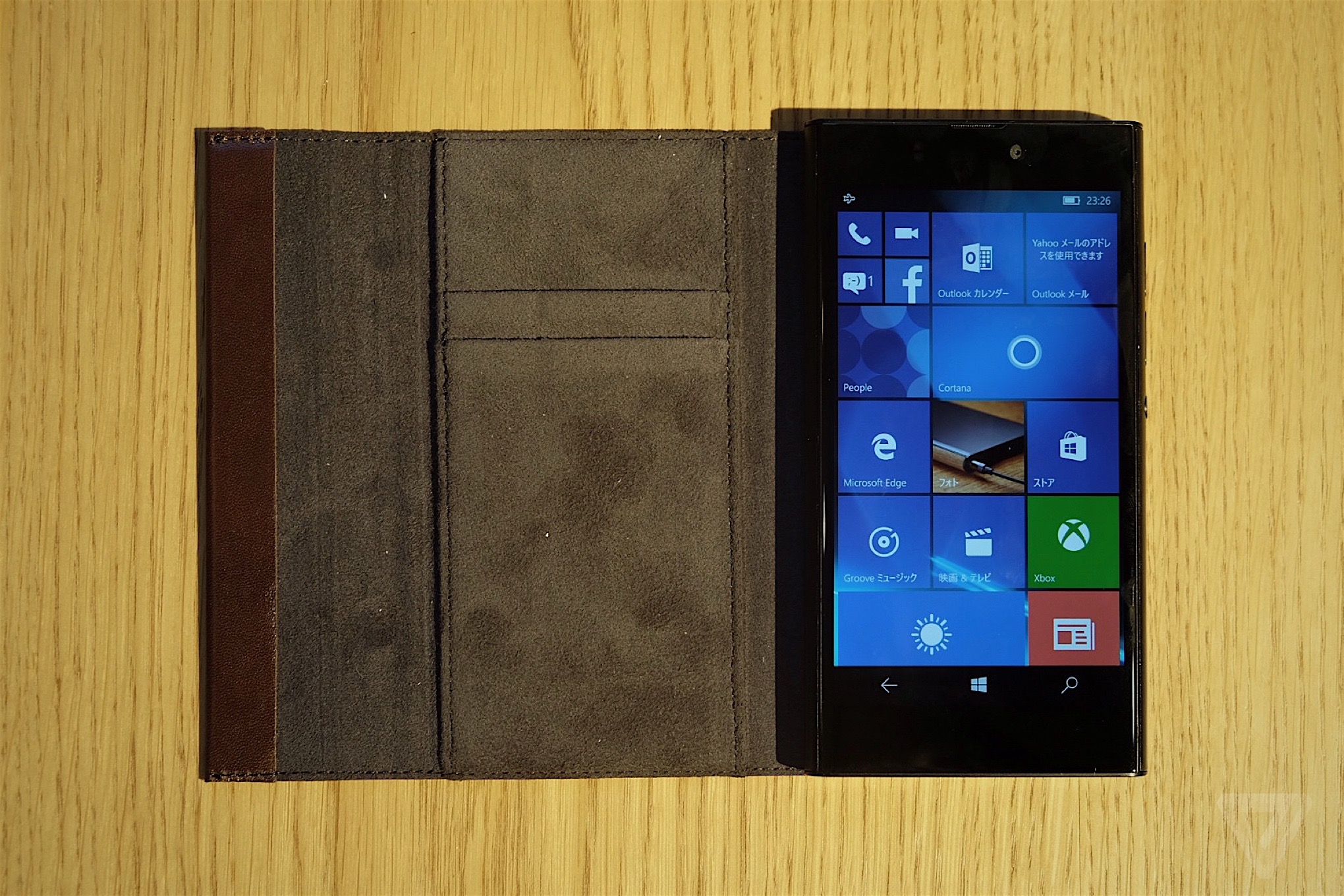 Simplism mainly operates in the iOS sphere, and part of the inspiration for developing the NuAns Neo was its designers’ feeling that no Android-based iPhone alternatives really captured the advantages of the iPhone; they believed the goal behind Android phones tends to be achieving a low price or pushing carrier-dictated features. Instead, Trinity says it selected Windows 10 because of the seamless software experience across devices, including the Continuum feature, and its stronger security than Android.

The designers’ preferences and experiences are clearly visible in the hardware, too. Simply put, this is the dream phone for anyone who designs phone accessories. The Neo itself is sold as the "Core," without a back panel, and there are two types of NuAns covers that you can choose from — the wallet-style Flip and a variety of Twotone square panels. Both feel great; the Flip can be used as an integrated kickstand and is far slicker than the average external wallet case, while the Twotone panels are made from materials like ultrasuede, Tennâge wood sheet, and Clarino synthetic leather. Other companies will be able to design for the phone, too, and luxury accessory designer Gramas has already signed up to produce some gaudy leather back panels.

The Neo even has an internal slot designed for the kind of IC card used for payments on Japanese transportation systems and elsewhere; the phone itself does have NFC, but IC cards are much more widely used in Japan, so many companies sell cases with built-in slots to give phones impromptu mobile payment support. There’s also a strap loop, another missing iPhone feature that has sold a lot of cases here. The Neo is a phone built around the concept of accessorizing from the ground up, where everything you’d ever buy for it was designed as part of the product itself. 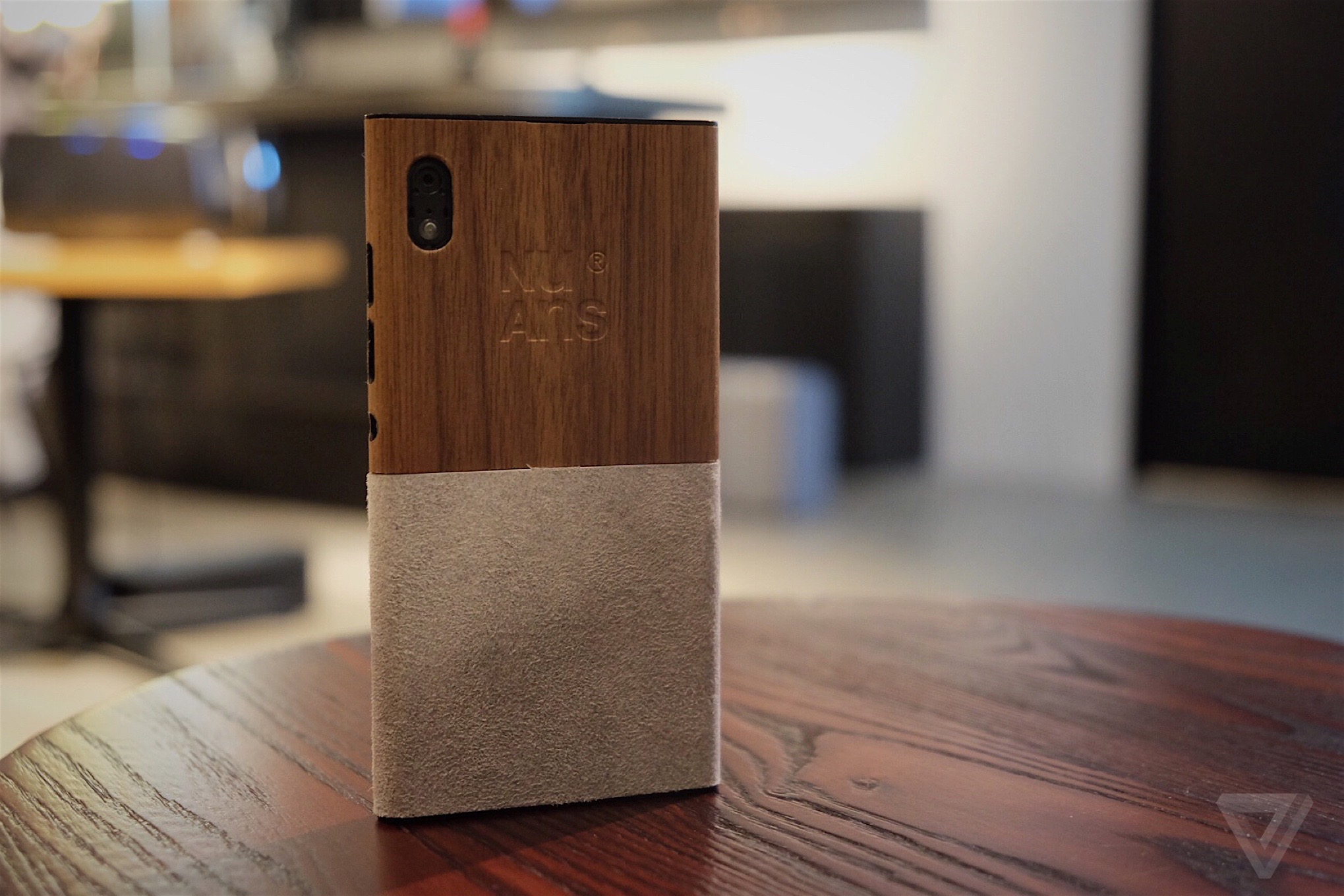 The internals are somewhat less intriguing. There’s a Snapdragon 617 processor, previously seen in the HTC One A9; a 5-inch 720p display that contributes to the phone’s comfortable feel but doesn’t impress technically; a 13-megapixel camera with an f/2.0 lens; 2GB of RAM; and a USB-C connector. The only spec that really stands out is the hefty 3,350mAh battery, which isn’t quite the most capacious out there but is far more than you’d expect a 5-inch phone to have. Trinity says it should last two days, and was one of the main reasons they decided to go for the phone’s thicker chassis.

The Neo isn't positioned as a traditional smartphone

The NuAns Neo will go on sale in January at ¥39,800 ($324), though that only gets you the Core unit — depending on materials, you’ll have to pay from ¥1,400 ($11) for Twotone parts or ¥2,970 ($24) for the Flip case. That’s not an unreasonable price by Japanese standards, but buying SIM-free phones is a relatively novel concept here. Coupled with a retail strategy that eschews traditional electronics stores for design- and lifestyle-focused outlets like Loft, BALS, Isetan, and Arenot, the Neo definitely isn’t positioned as a traditional smartphone.

That may be for the best. Windows 10 Mobile isn’t fully baked as an operating system, and its weak app support is even more pronounced in Japan, where the ecosystem has been dead for years. But with rarity might come value — in a Japanese context, Windows sets this phone's software apart as much as its unusual hardware, as opposed to the ubiquitous Android handsets at similar low price points.

And for anyone willing to give it a shot, the NuAns Neo is at least a more original and inventive offering than what Microsoft itself cooked up with the latest flagship Lumias, which haven’t been announced for a Japanese release. Like Tokujin Yoshioka's gorgeous high-end Firefox OS phone, this is a product you’d buy for its design, rather than its powerful specs or packed app store. For some people, that might just be what they’re looking for.

The Neo's Core unit doesn't come with a back panel at all — accessorizing is not optional.
Most Popular
From our sponsor
Advertiser Content From