The hardware is here, now the software needs to follow through

December in the tech world is typically as drab as the weather in the Northern Hemisphere. But the seasonal listlessness opens up room for smaller companies to make some noise and Nextbit is taking full advantage by going on a European tour this week. The company's design chief Scott Croyle was in London this morning to show off the latest iteration of its upcoming Robin Android smartphone, before jetting off to Paris and completing the hype circuit with a visit to Berlin.

What Croyle and his team had to show was still an engineering sample, lacking the refinement and precision of the final product, though it's now running Nextbit's software, which is a milestone in and of itself. My first impression of the Robin is a positive one, as it has the light weight and narrow sides of a phone I can use comfortably with one hand. It's almost as tall as the iPhone 6S Plus, but never feels anywhere near as awkward to handle and operate. The Robin's 5.2-inch display is bright and its 1080p resolution is adequate.

As minimal as the Robin's design is, it still feels like it has a character of its own. The regular straight lines evoke Sony's Xperia series in their aesthetics, but the Robin's plastic form is a little more comfortable and friendly to the touch than Sony's all-glass affair. The Robin's currently recessed power button, which was the one immediate downside for me, will be elevated in the final production device, while the volume buttons on the other side are a pleasant pair of bulbous drops of color. That's probably the key word for this phone: pleasant. 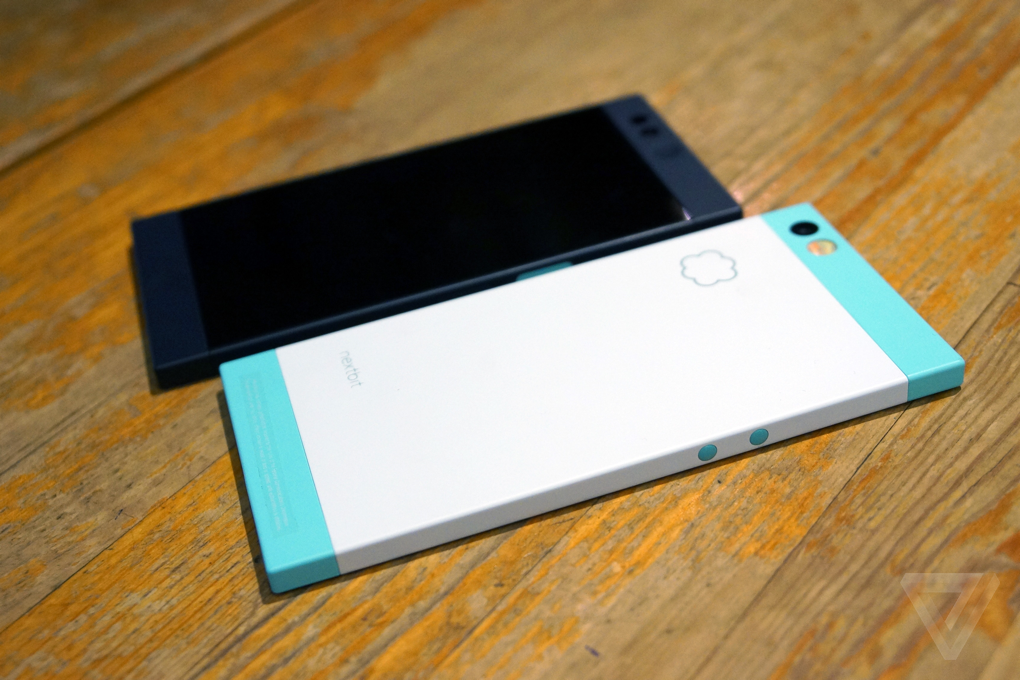 The phones that Nextbit is touring Europe with are predictably nice to handle and attractive to look at — more so in person than the pictures would suggest — but that's to be expected given Croyle's extensive design pedigree as the former head of HTC design. The thing that Nextbit hopes to stand out with is its cloud-centric handling of data on the phone. All your photos and apps are automatically backed up to an internet locker that can fit up to 100GB of data, and when you start approaching your 32GB limit of onboard storage, the Robin will intelligently offload (i.e. delete) your least-used apps or pictures from the device itself in order to accommodate any new content you want to add. Apps and pictures that are not on the device leave behind a ghostly gray icon that allows you to pull them back when you need them (and have an internet connection).

Cloud storage isn't a feature here, it's a reason for being

This is all implemented in a straightforward fashion, and I had no issue restoring a couple of ghost apps while playing around with the Robin. The option to pin apps I never want to offload is also there, and the whole system seems simple enough to pick up and use quickly. I don't know that it would convince me to choose this over any other Android Marshmallow smartphone, but it's a thoughtfully designed addition, in any case. Nextbit's Android skin is also very sparse, more often taking away elements of the visual interface rather than adding to it.

The one thing that disappointed me about the Robin was the state of its software optimization. Nextbit hopes to ship out the first handsets to preorder customers and Kickstarter backers in late January, but it still has a long way to go until its software is up to the task. The Robin's current Android build is slow, in spite of the capable Snapdragon 808 processor within, and unfortunately buggy. The camera app, for example, is not yet functional, so there's nothing to judge one of the phone's key components on.

As it is today, the Nextbit Robin looks to have all the physical design elements in place, however it still has everything to prove on the software side of the equation.