It's pretty clear by now that Earth has a problem. Greenhouse gases released by the burning of fossil fuels have steadily risen in the world's atmosphere since the industrial revolution, trapping heat and leading to a global increase in average temperatures. Carbon dioxide levels, for example, are at an all-time high of more than 400 parts per million — more than double the amount during the ice ages. It's not just an issue above ground, either. Of the carbon that gets pumped into the air, about 30 to 40 percent sinks into the world's oceans, lowering the pH of the water and making it more acidic each year.

As these environmental issues continue to worsen, there’s been a parallel rise in the eco-documentary — a genre of films dedicated to highlighting how human actions are negatively impacting the planet. The Discovery Channel's Racing Extinction is the latest of these, examining the issues of global warming and ocean acidification through the lens of the world's evaporating wildlife. As the film shows, rising temperatures are leading to habitat loss and the deaths of thousands of species across the world, while changing ocean chemistry is killing off coral and phytoplankton, fundamentally altering the marine ecosystem. The documentary also tackles another big animal killer, the international exotic wildlife trade, through which endangered species like sharks and Manta rays are being butchered and then sold as food or as bogus medical remedies. It’s a graphic and compelling look into a terrible issue, and while it paints a morbid picture for our world’s future, the scope of the problem may be too big for just one documentary to tackle.

Racing Extinction’s title hints at the momentum the documentary is trying to achieve, as well as the fate that awaits us if we do not act. As a species, we are racing toward the next major extinction event; five have occurred throughout the course of our planet's history, and some say the sixth event is already underway. The bottom line is clear: if we don't fix these issues, half of all the world's species will be gone within the next 100 years, the filmmakers say. It's a bold prediction — one they hope will inspire a movement among the world's citizens to alter their lives in order to save these creatures. The documentary’s storytelling is unique enough to grab people's attention, and it displays some pretty graphic imagery of animal slaughter that will elicit a desire for action.

Yet ultimately Racing Extinction isn't asking anything too novel of its viewers — certainly not much they haven’t been told before. The film’s release coincides with the "Start With 1 Thing" initiative, which prompts people to change just one thing in their lives to help stop this mass extinction we're headed toward. These "things" are as simple as not eating meat for a whole day each week (the meat industry is a big producer of methane gas) or switching to public transportation to decrease the country's reliance on fossil fuels in cars. But this call to combat climate change has been echoed by documentaries, scientists, and politicians for years now, and while we drastically need to address the issue, merely asking people to reduce their carbon footprint may not be enough.

Louie Psihoyos, the film's director, describes Racing Extinction as an eco-thriller, similar to his previous Academy Award winning doc, The Cove, which followed the mass slaughter of dolphins in Taiji, Wakayama, Japan. The two documentaries share common cinematic techniques: like The Cove, the filmmakers of Racing Extinction employ guerilla-style shooting tactics to create suspense and raise the stakes. Cameras are hidden inside women's purses as they covertly dine at a sushi restaurant that's serving endangered whale. Activists pose as potential exotic seafood buyers in order to infiltrate a factory in Hong Kong that trades shark fins. It's a great way of turning a global issue and making it feel much more personal; you're rooting for the filmmakers to get away with what they're doing and expose the injustices being done to the world's wildlife.

These tactics all relate to Racing Extinction's driving conviction — that imagery is the ultimate motivator to incite change. Psihoyos has no qualms about showing the gruesome images of a Manta ray being speared and then dissected by fishermen in Indonesia. Cameras follow a dying shark that's had all its fins sawed off, as it falls to the ocean floor in immense pain. The last male Kauai O'o bird sings its sweet mating call, but the viewer soon learns female Kauai O'o birds no longer exist.

Psihoyos believes that the mere sight of these somber images will be enough to get his audience to change their ways. To that end, the filmmakers produced a series of big theatrical stunts over the summer, in which they shined pictures of endangered animals on the facades of buildings in New York City. Images of whales, tree frogs, leopards and more adorned the sides of the Empire State Building and the United Nations for a night. A projector was even placed on top of a Tesla to illuminate buildings along the street as the electric car drove by. 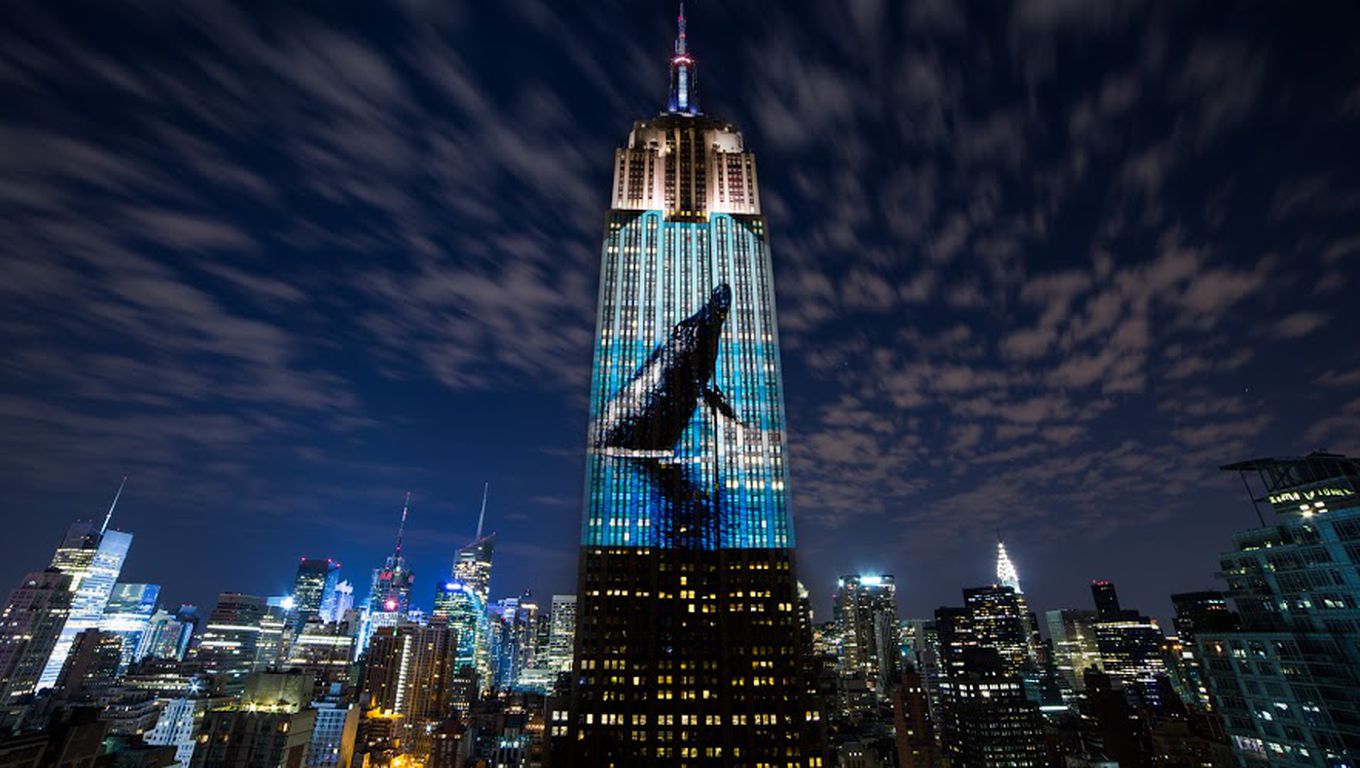 That Racing Extinction might achieve this goal is not out of the realm of possibility given the track record of the more high profile eco-docs of the past decade; or even Psihoyos’ own resume. In 2009, around 23,000 dolphins were killed each year in Japan. Six years after the release of The Cove, that number is down to 6,000 a year, thanks to pressure from activists. Since the release of Gabriela Cowperthwaite’s Blackfish in 2013 and its depiction of killer whales raised in captivity, SeaWorld's parks have been bombarded by protests and criticism, forcing the company to alter its live whale show. It's possible that Racing Extinction could have a similar impact.

When the target is a macro-problem, the challenge is more daunting

Yet those films were addressing micro-issues that can be targeted much more easily than a widespread issue like climate change. It's simpler to attack a few villains, like a group of Japanese dolphin hunters or SeaWorld executives. But when the issue is a macro-problem, and the perpetrator is entire cultures up to and including your audience, the challenge to act is much more daunting. Additionally, Racing Extinction is only asking for minor changes from its audience, but these changes must be done by millions — even billions — in order to mitigate the damage that's been done.

And even that won’t be enough. Climate change is an extensive problem, rooted deep in our world’s energy and transportation sectors. Even if carbon emissions from power plants completely stopped today, CO2 would still remain in the atmosphere for up to 1,000 years. Individuals switching to green energy will certainly help, but international regulatory measures to alter these industries is desperately needed, as well.

Fortunately, world leaders are also poised to act. This week, the United Nations has convened in Paris for an international conference on climate change, to discuss policies that can reduce carbon emissions across the globe. It may be that a combination of these laws, limiting the gases released by energy production and transportation, along with minor lifestyles changes by the world's population can be enough to turn the tides. Time will tell, but as Racing Extinction points out, there isn't much time left.

Racing Extinction premieres on the Discovery Channel on December 2nd at 9PM ET/PT.