Casting a ballot's a total layup

The NBA is opening up voting for the 2016 All-Star Game this afternoon, and it's making it harder for fans to plead laziness when it comes to not casting a ballot — all they have to do is search. The league is partnering with Google to let fans vote directly through Google searches on both desktop and mobile devices, the first such arrangement Google's struck with a major sports league.

The mechanism is simple: searching a phrase like "NBA all-star voting" or "NBA all-star Golden State Warriors" will bring up cards for each NBA team and its players, and fans can select said cards to cast their votes (one per player per day, up to a maximum of 10 total votes per day). 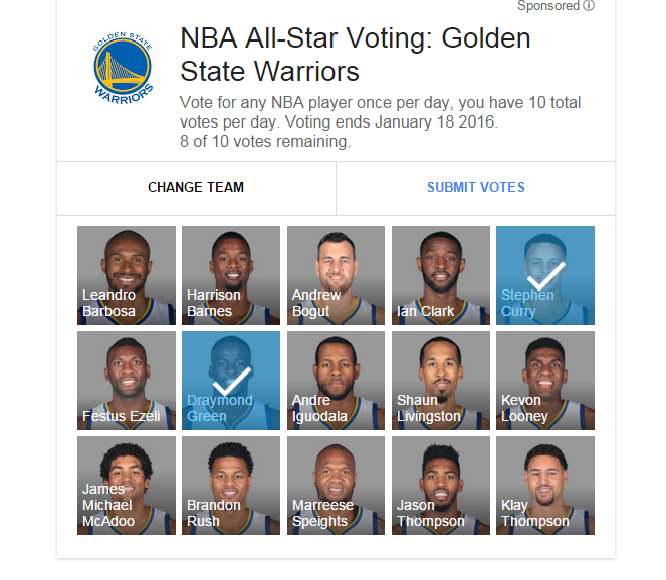 This added functionality is joining a wide range of existing voting options, many of which involve the biggest social networks around the world. Fans can cast their votes on Facebook, Instagram, and Twitter using the hashtag #NBAVote alongside a player's first and last names, and Chinese fans can do the same using Sina Weibo and Tencent. (If you're feeling traditional, you can vote through the NBA's website, its own app, or using SMS.) It's easy to see why voting through Google appeals to the NBA — there's no way for fans to submit joke ballots endorsing players unworthy of All-Star consideration, and at the very least it's another pipeline for potential voters who aren't big on social media. 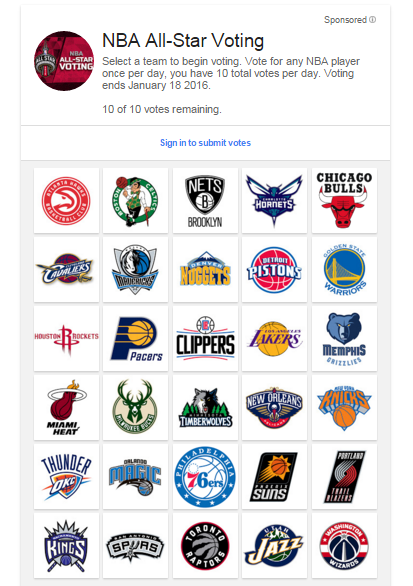 Partnering with Google makes sense for the NBA on a larger conceptual level, too — it's the most digitally-oriented major North American sports league. In just the last month, the league has partnered with Verizon on an official sponsorship, a deal that includes exclusive content for the latter's new Go90 video service. (Verizon is presenting this year's official voting process.) It's also unveiled new technology that can automate the production of GIFs and highlight reels, technology designed in collaboration with Israeli company WSC Sports.

Voting for this season's All-Star festivities wraps up on January 18th, and the league will announce the results live on TNT a few days later on January 21st. The game itself takes place on February 14th in Toronto. Golden State point guard Stephen Curry led last year's totals with over 1.5 million votes.