A cute phone that cuts a few too many corners

Dear Vlad, I like Android phones, but I don’t like carrying around enormous bricks of technology — what’s the phone for me?

The best Android smartphones are often also the biggest. Nexus 6P. Galaxy Note 5. LG V10. You’re confronted with a choice between the best features, camera performance, and user experience versus the size and comfort of a reasonably sized handset.

This isn’t a quandary that iPhone buyers face. Apple’s foremost smartphone comes with a 4.7-inch screen that fits the needs and pockets of most people. But Apple also has a 5.5-inch Plus model, which is designed to counter the hordes of larger-than-life Android alternatives — why doesn’t Android have a corresponding answer to the regular iPhone?

OnePlus has heeded the call for a more convenient Android flagship smartphone with the introduction of its third handset, the OnePlus X. It’s the same size and weight as the iPhone 6S, and it touts many of the flagship-tier qualities and features that one might expect. At an unsubsidized price of $249, the X also undercuts a whole swathe of larger and louder phones while looking slimmer and slicker than the majority of them. 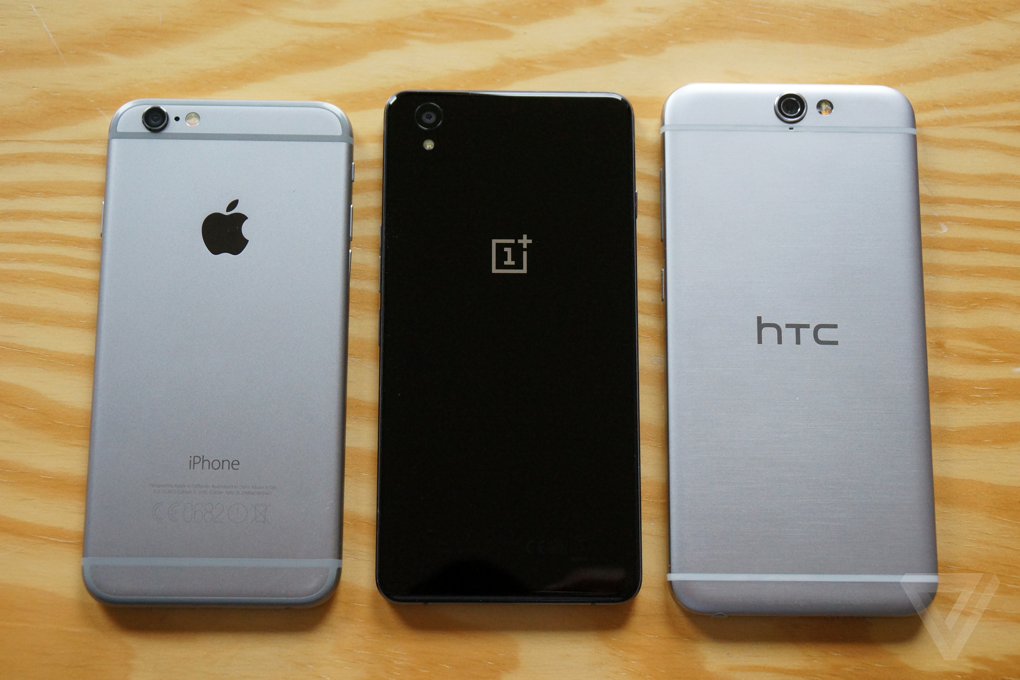 But the X is far from the compact flagship that its maker wants you to believe it is. If you live in the United States, this phone won’t offer proper LTE connectivity on any network, and if you want to use Android Pay, you’ll find its lack of NFC or a fingerprint sensor disturbing omissions. In short, it’s yet another trimmed-down, budget-conscious smaller Android phone — shrinking capabilities along with the size and price — though that doesn’t prevent it from being good in its own right. Just don’t expect miracles for $249. 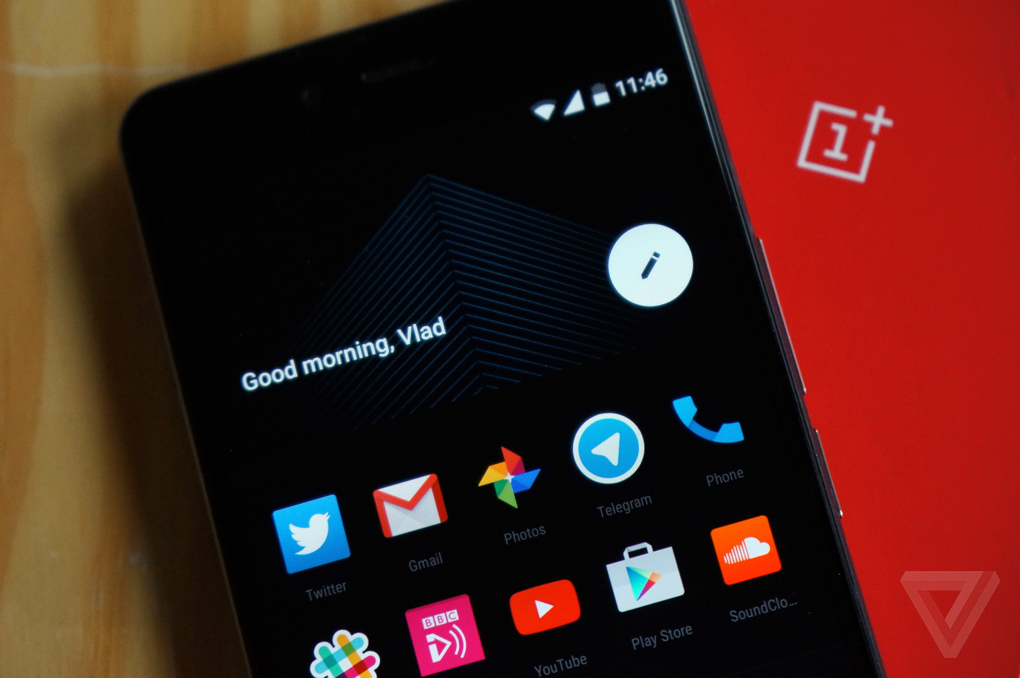 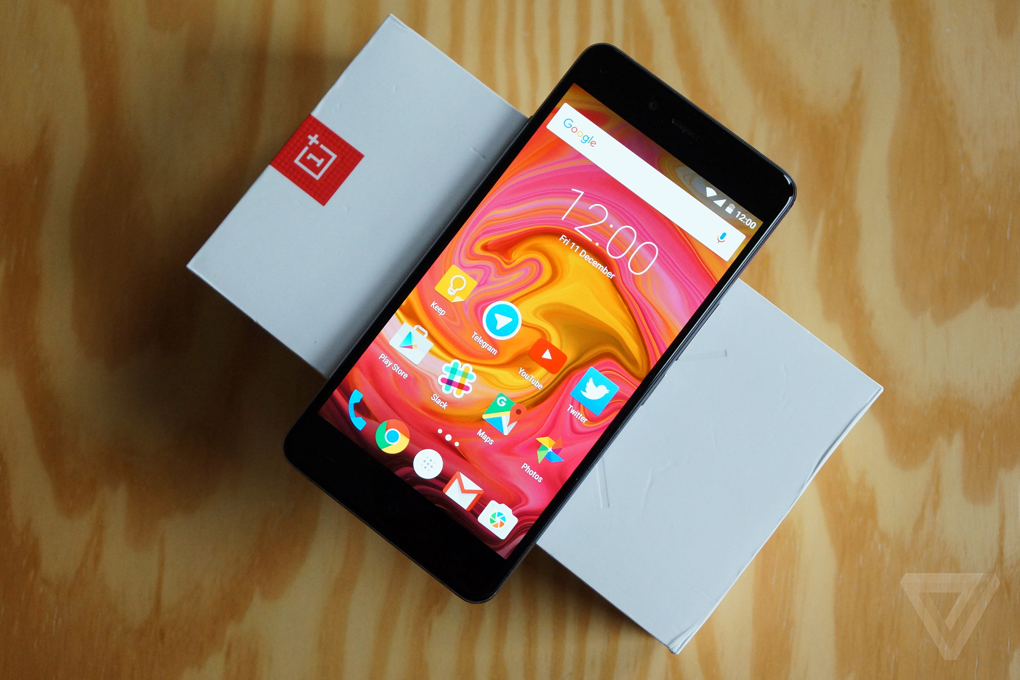 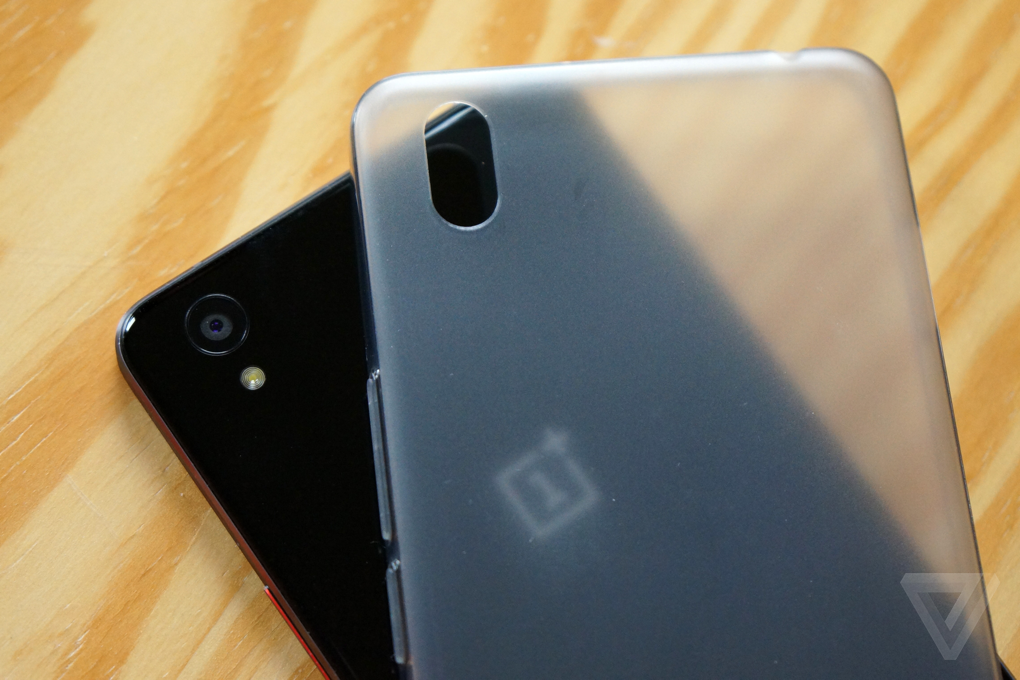 The OnePlus X is my introduction to this Chinese company’s devices, and it makes a great first impression. It’s like the little black dress of mobiles: minimally and efficiently designed, eschewing frivolous flourishes for a basic and timeless look. OnePlus has smartly combined the phone’s dark aesthetic with the perfect blacks of an AMOLED display and a dark software theme, lending the device a sense of coherence. Unfortunately, the screen isn’t the best of its kind and it exhibits the familiar blue-green tinge that is often seen on AMOLED displays.

Having glass on both the front and back of the phone helps the OnePlus X’s looks, but it does little for its durability or ergonomics. The phone’s surface is too slippery, both in the hand and when it’s rested on a table, making it susceptible to unforeseen drops and spills. It’s nice that OnePlus bundles a silicone case in the box, but it would have been even better if the phone itself was easier to grip reliably. The ridged sides just feel flat to the touch and don’t contribute to a sturdier grip — they’re also incongruous with the curved glass, and their chamfered edges are quick to pick up minor scuffs and abrasions.

The issue with glass backs, as illustrated by Sony’s Xperia smartphones, is that they essentially double your risk of having a cracked screen. Samsung could justify the move with its Galaxy S6 this year because it facilitated the addition of integrated wireless charging, but OnePlus has no such reason to rely on. The X is almost entirely made out of glass because that just looks cool. Seemingly conscious of the inherent vulnerability, OnePlus also has a limited ceramic edition of the X, which costs more and is even harder to get ahold of than the regular X. The ceramic X is heavier and has a more reflective finish, but is otherwise indistinguishable to the touch. 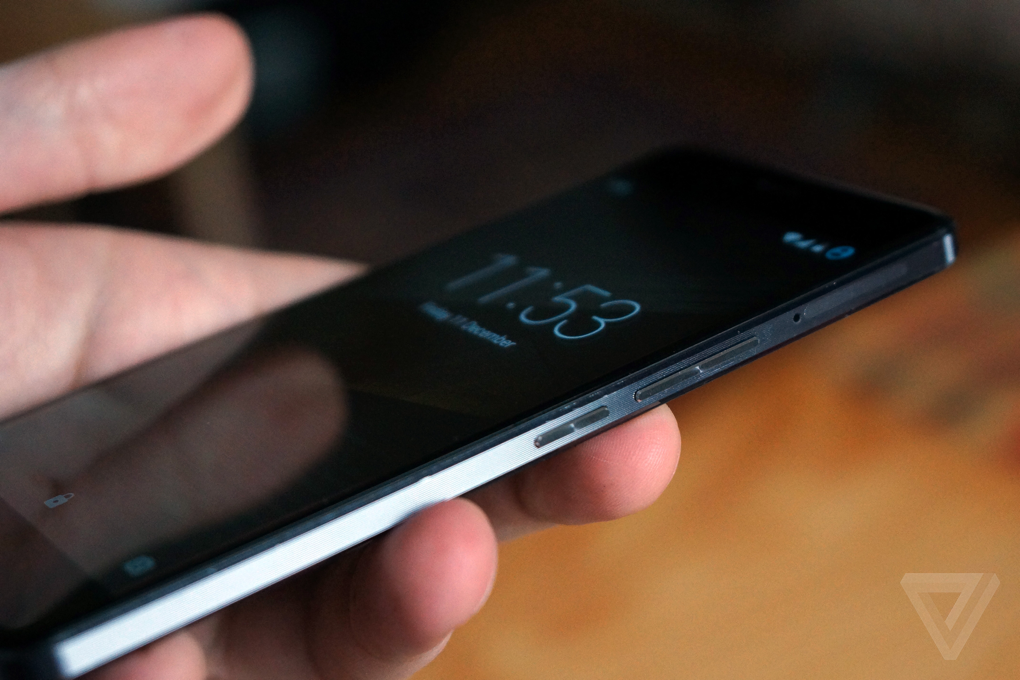 OnePlus is a young company and its inexperience shows

The longer I used the OnePlus X, the more I began to notice the seemingly small downsides of its design. This phone’s symmetry makes it tough to identify which way is up (or front, for that matter) just by touch. Its power button is also located at the midpoint of the handset’s right side, which would usually be the perfect location, except this phone isn’t an enormous 6-inch slab, and my thumb therefore naturally rests further up. Taken as a whole, the OnePlus X simply doesn’t feel as good as it looks. And for a device whose main appeal is ease of use, accessibility, and human friendliness, the way it feels to touch and hold is actually quite important.

Though OnePlus’ hardware decisions leave a few things to be desired, the company’s treatment and modifications of Android are almost universally for the better. Before you even wake the phone, lock screen gestures can turn on the flashlight or camera app. Ambient notifications also surface on the phone’s screen, much in the same way they do on Google’s Nexus 6P and Motorola phones. 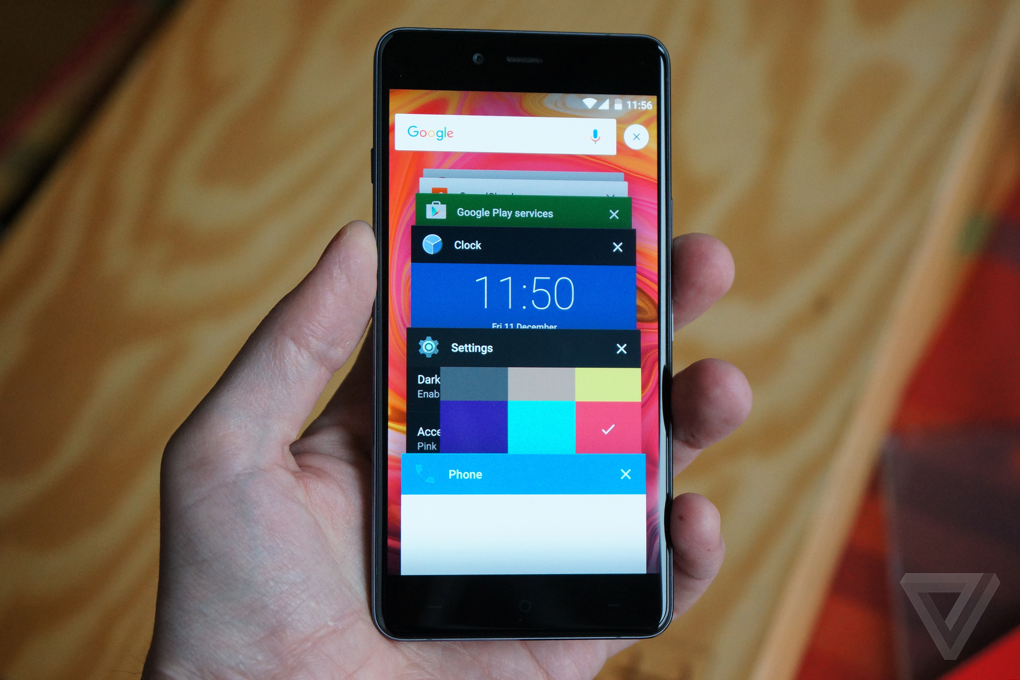 The X’s Android navigation keys are integrated into the lower bezel below the screen, giving it an extremely efficient footprint (which frankly embarrasses unnecessarily tall smartphones like HTC’s One line). I like that I can set my own highlight color for the Oxygen OS theme, which remains faithful to the basic Android interface and restrains itself to a few tasteful tweaks. A side menu, which OnePlus calls Shelf, plays host to my most used apps and contacts and also offers room for extra widgets. It can be disabled if I don’t find it useful. That’s a fundamental and valuable tenet of this company’s software design: allowing the user the flexibility to opt out of the company’s defaults.

Software tweaks are restrained, tasteful, and for the better

There’s a physical slider on the left of the X, as first introduced on the OnePlus 2, for toggling between receiving all notifications, just priority alerts, or none at all. Another neat and optional extra. It’s hard not to like a company and an operating system that tries to enhance the user experience while retaining a respect for the user’s own preferences. 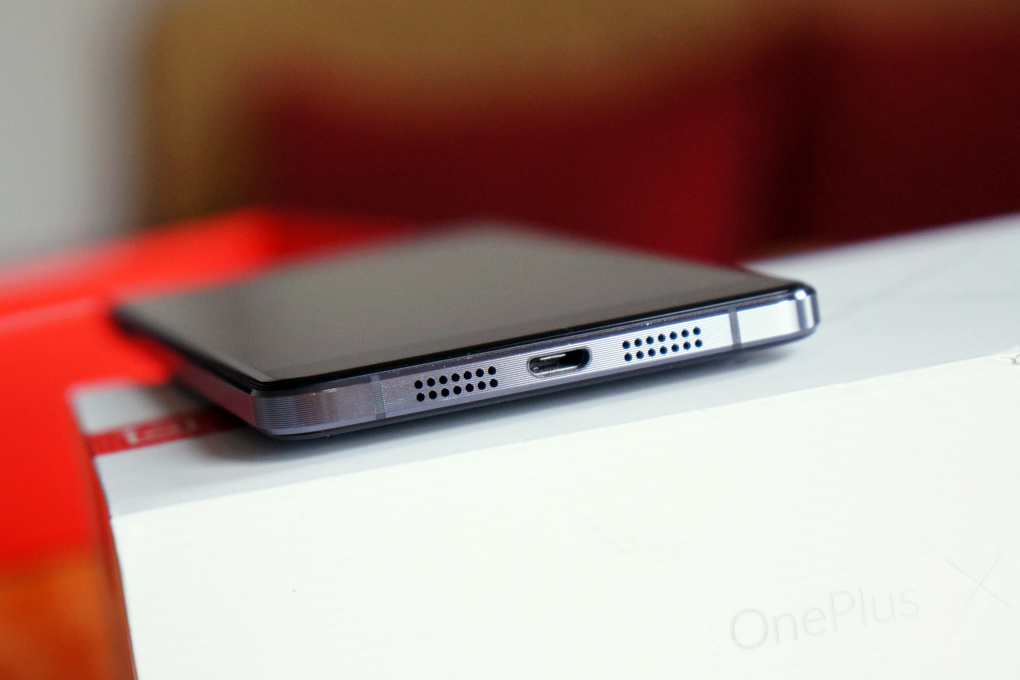 But there are downsides to the software as well. Chief among them is that the OnePlus is built atop Android 5.1.1 at a time when 6.0 is out and offers improvements like the energy-efficient Doze mode and granular app permission controls. OnePlus argues that it already has a battery-preserving mode and can give you as good a user experience, but for my tastes, being able to deliver the latest software in a timely manner is part of the phone ownership experience, and it’s a point on which OnePlus is failing right out of the gate with the X. I want to trust that my phone will be fully up to date a year from now, and I’m simply not getting that impression from a handset shipping with outdated software.

Then again, maybe I’m expecting too much. The OnePlus X is almost unapologetically designed as a phone for right now. It lacks a fingerprint sensor and NFC, two hardware components that are being harnessed by things like Android Pay and becoming must-have features. By this time next year, there’ll just be too many things this phone won’t be able to do (or do well) and you’ll be wanting a new one anyway. Either that or you don’t care about specs and the cutting edge, in which case you could tolerate all of the foregoing quite happily. The OnePlus X has decent responsiveness and an inoffensive design that mostly gets out of the user’s way. 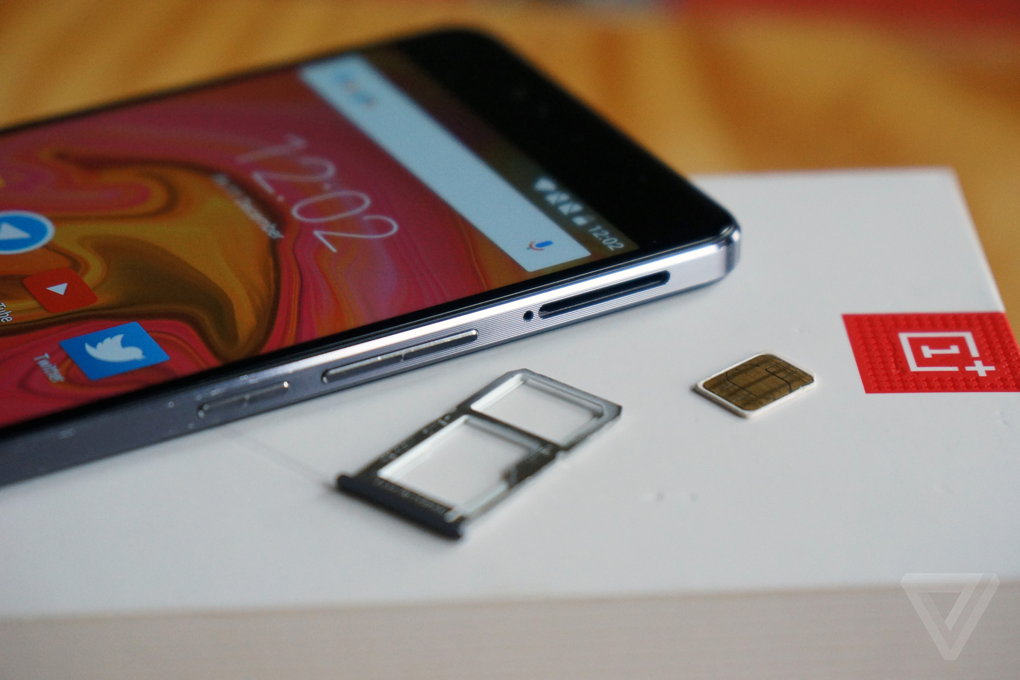 The one real pain point to this phone, which will be universal to all users, is the camera. It’s not fast to launch, lacks optical image stabilization, and produces mediocre results. I could happily hand this phone to a non-techy family member and trust that they’ll enjoy using it, except for the camera. Everyone likes taking pictures, and I’ve seen too many people struggling with HTC Ones in the past to inflict a phone with a poor camera upon my loved ones anymore. The OnePlus X also exhibits some stutters when browsing through photos, which compounds the issue.

Looking at the OnePlus X’s spec sheet, two potential worries stand out in the aged Snapdragon 801 processor and the smallish (by Android standards) 2,525mAh battery. Neither has been a huge problem for me, though performance is definitely not up to the standard exhibited by the latest Android devices, including the Snapdragon 617-powered HTC One A9. The X’s interface is not as smoothly animated and its apps don’t load as quickly. The graphically intensive games of the future might also pose real challenges for the X's processor. It’s perfectly tolerable for now, however, and its battery lasts a solid day without much issue. As a whole, this device pretty much defines the middle of the road: neither awful nor amazing. 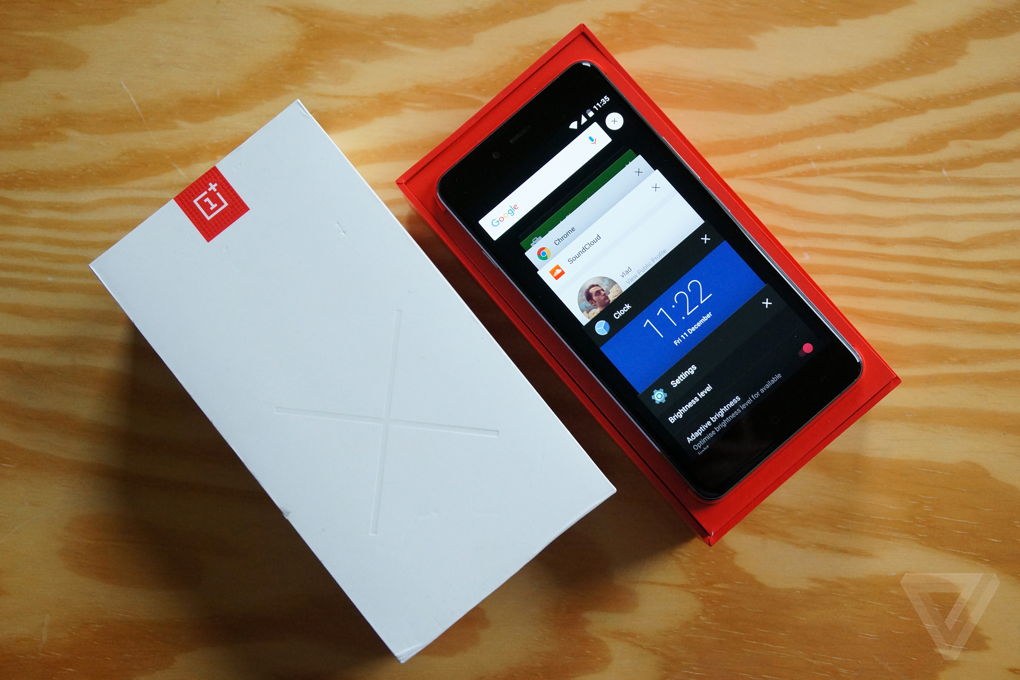 The OnePlus X is, on the surface, the sort of phone I keep asking for. It strikes a great balance between size and screen real estate, remaining thin, light, and extremely portable while still accommodating a full 5-inch display. It just vanishes in my pocket, which beefier handsets like the LG V10 or Galaxy Note 5 can only dream of. I also like that OnePlus doesn’t try to include features or specs outside of its comfort zone and budget. This is an uncomplicated phone with a simple premise: good looks and great value for money. Most phones in this price range, such as the thoroughly competent Moto G, tend to look frumpy and unstylish, but that’s not something you can ever accuse the OnePlus X of being.

The things that let the OnePlus X down are its ergonomics and camera. Neither is as refined as it should be, and stronger alternatives exist to preclude me recommending that you engage in the wild chase for an invite or an open sale event for this phone. The X is cute, of that there is no doubt, but it’s not cute enough to overcome its deficiencies.