Here's how the top iPhone apps are using 3D Touch

Here's how the top iPhone apps are using 3D Touch

When Apple introduced 3D Touch on the iPhone 6S this September, it described the technology as a revolutionary paradigm for interacting with touchscreen devices. And it really seems like 3D Touch — and pressure sensitivity in general — could become that, but it isn't yet. First, developers have to get on board and add support for it into their apps. This is ultimately what will make or break it: if developers figure out interesting ways to use 3D Touch, then it'll succeed. If they don't add anything more than home screen shortcuts, then it won't have a big impact.

We covered a number of the best initial 3D Touch uses when the 6S first launched in September. Now more than two months later, we have a better idea of how developers are implementing it. The results, so far, are mixed. A lot of big app developers haven't added anything more than home screen shortcuts; that is, the Quick Actions that pop up when you press hard on an app's icon. This is the bare minimum level of support, an interaction that only happens once, at most, every time you use an app. And it's all that a lot of popular apps have added, including Snapchat, Facebook, Periscope, Google Drive, Chrome, OneNote, Waze, LinkedIn, Amazon Video, Box, and 500px.

Of course, it's not entirely fair to knock developers for not immediately changing their product roadmaps to support a new feature that's only accessible to a small portion of their users (and hey, there are a lot of apps that haven't even added Quick Actions yet). Still, there are some easy basics that they could choose to add support for, without spending time developing a strange or novel use. That's because Apple didn't make 3D Touch a total free-for-all: instead, it introduced the concepts of "peek" and "pop," which let you preview ("peek at") a photo, website, or some other content in a pop-up and then fully open ("pop into") that app with a light and then hard press.

Peek and pop are really convenient ways to move around on iOS, especially when you want to look through many full-screen pages in succession. A few major apps had this at launch — including Instagram, Dropbox, and Pinterest — and a number of others have added it in the time since. Those include: 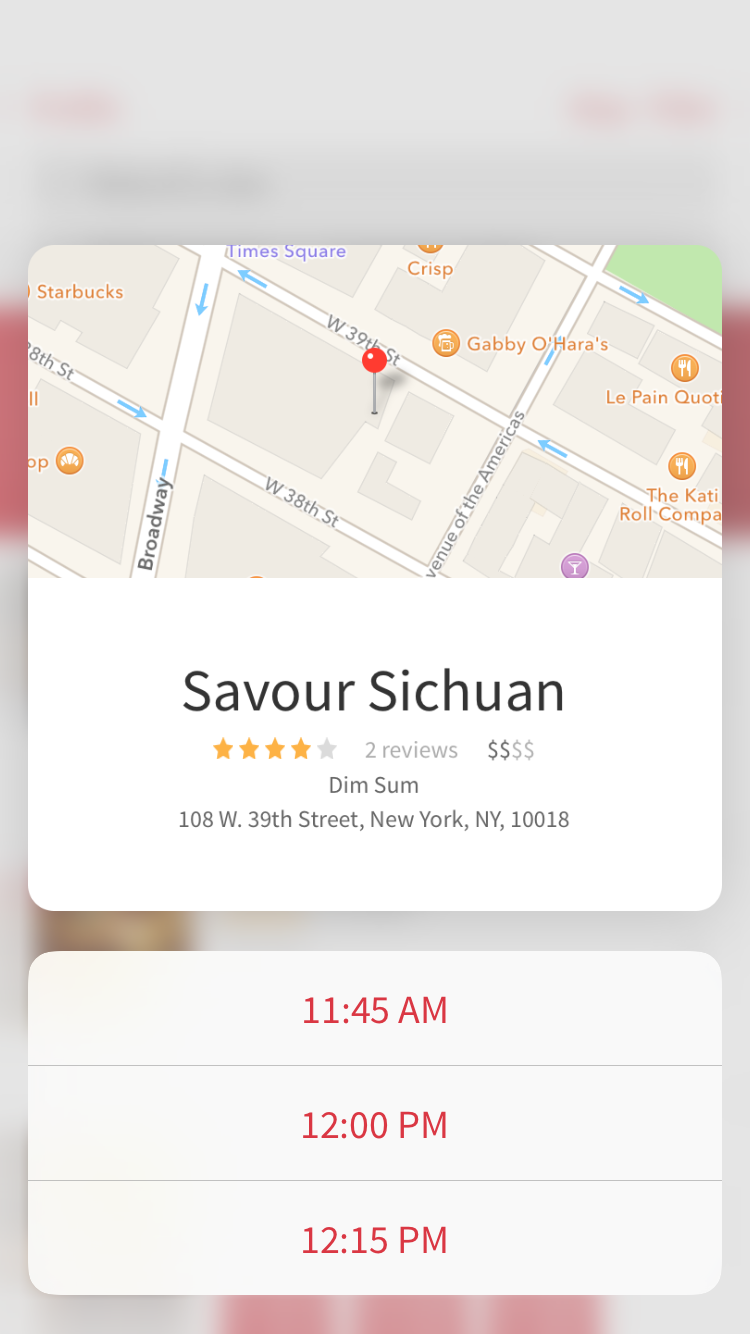 Skype: which lets you peek into recent conversations or at live video if you're on a call. Inside messages, you can also peek at locations, photos, contacts, and web links, some of which can be swiped up for more options.

WhatsApp: which lets you peek at conversations and the links, photos, videos, contact cards, and locations inside them.

Fantastical: which lets you peek at events and reminders.

OpenTable: which lets you 3D Touch on a restaurant to preview its location on a map. You can then swipe up (seen right) to see upcoming reservations that are available. Rather than popping you into the map if you press harder, OpenTable will send you through to the restaurant's full page.

StubHub: which lets you peek at ticket info and pricing (though not events as a whole).

Evernote: which lets you peek at recent notes (but not all notes), as well as links and locations inside them.

Wunderlist: which lets you peek at individual items on your to-do lists (but not overall lists). You can also swipe up on a preview to quickly set or alter a reminder.

Using 3D Touch in these apps makes you wish that more would get on board with peek and pop (and that the apps already supporting it would let you preview in even more places). From a user's perspective, at least, it seems hard to go wrong with adding peek to photos, albums, profiles, or really anything that would open up a new window. Particularly in circumstances where you're browsing through unfamiliar content, it can be a much quicker way to explore.

But that may also one reason we haven't seen major apps like Facebook try anything with peek yet: if peeking reduces engagement — or the number of ads that can be served — it's going to be bad for the app, and potentially for users as well (not the ads part, but you certainly wouldn't want fewer people commenting on or liking your photos). Maybe that isn't a concern and it's just a matter of time until peek is ubiquitous, but I'd be surprised if some app makers aren't taking this into consideration.

It's easy to be disenchanted with 3D Touch at this point, with Quick Actions being the main use apps are getting out of them. But it hasn't even been three months since the 6S was released. What's more appropriate to pay attention to at this point are the apps starting to play with 3D Touch in interesting ways. Here are a few of them:

Pixelmator: If you're drawing or painting in Pixelmator on the 6S, you can now alter the thickness of strokes based on how much pressure you're applying to the screen. Pixelmator isn't the only app to do this, and you can expect this feature to arrive pretty much everywhere else you can draw a line.

Bumpn: Bumpn is a photo and video sharing app that's received a bit of attention for its use of 3D Touch. Like Periscope, it lets you give multiple hearts to someone to show that you've liked something of their's, but rather than making you tap for each heart, Bumpn lets you give more hearts by pressing harder on the screen.

Auxy and iMaschine 2: These two beat-making apps use 3D Touch in different ways, but they're both meant to make music creation quicker. Auxy lets you skip straight to editing a loop by using 3D Touch on it. iMaschine 2 lets you use 3D Touch to change the volume of a beat or play multiple beats in succession.

Flickr: Flickr may have my favorite twist on 3D Touch so far, with a slight change to how peek works. When you're previewing a photo in your camera roll, Flickr lets you scrub from side to side to quickly see more pictures. It's a small change, but as soon as you try it, you wonder why Apple didn't figure this out in the first place — it ought to be in the iPhone's camera roll, and maybe even everywhere there's a gallery of photos. Unfortunately, Flickr has only implemented this so far for your own overall camera roll; it doesn't work inside of albums or for other users, and it totally should. (Flickr does, however, let you do a standard peek at most profiles, photos, albums, and notifications.)

Anyone who's a repeat early adopter of new iPhones shouldn't be surprised that support for the 6S's flagship feature remains scattered close to three months in. It was the exact same way at this point when apps had to update for the iPhone 6's larger screen — it took Starbucks an entire year — and apps lagged behind on adding Touch ID support, too. 3D Touch is going to be even harder. Apple has given developers a couple clear ways to add support, and most likely will over the next year. But developers are going to need more time before they figure out how to make 3D Touch truly useful to their specific apps, turning it into the revolutionary paradigm that Apple wants it to be. There are already hints at how it could get there, but for now, we're still waiting for some of our favorite apps to add the basics.