Even Apple doesn't want to use Final Cut Pro X

Even Apple doesn't want to use Final Cut Pro X

More than four years after its release, Final Cut Pro X is still seen as a blight on the video editing industry. To quote The Verge's own video director Tom Connors, "I was so heartbroken by it." But it's one thing for video editors out in the world to hate it. It's another for Apple, the company that makes it, to not endorse its use internally.

Apple recently put up a job listing for an Assistant Editor under the Beats by Dre umbrella. The position requires some critical editing know-how, but you might notice a particular software suite completely missing here: 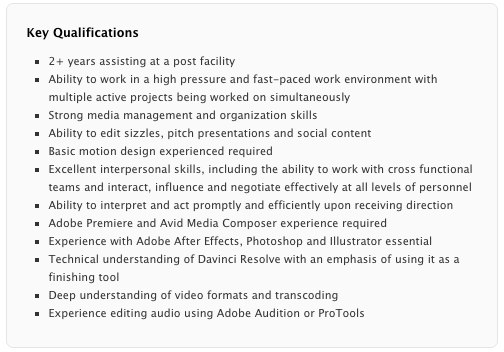 Do you see Final Cut anywhere here? Neither do I.

Apple did a lot in the months after FCP X's initial release to address some of its most glaring problems, but that didn't stop editors from abandoning it. Judging from this listing, it looks like FCP X is collecting dust even in Cupertino. Now, Adobe Premiere and Avid are great software, but at some point Apple is just going to have to do something about Final Cut. This whole situation is not a good look.