For better or for worse, Pandora is giving listeners one station where they can hear everything they’ve ever thumbed up in the radio streaming service’s 10-year history. This station, called Thumbprint Radio, can be added to your list of Pandora stations starting today; find it by following this link or by searching for "Thumbprint Radio." It’s unique to each person, and as a song plays, the date when it was last thumbed up is displayed.

Ten years is a lot of history with a streaming service, and, like you, your music tastes have likely (hopefully) matured a little since you first began using Pandora. To avoid jolting you back to 2005, Thumbprint Radio will initially focus on what you’ve liked in the past four to five months.

How much do you trust your own taste in music?

And rather than being stuck listening to a bunch of songs that you may or may not remember voting up in Pandora, you can edit your Thumbprint Radio station as you listen to it by thumbing songs up or down. Support your 2007 self’s love of Rihanna? Endorse your original choice by once again thumbing up "Don’t Stop The Music." Glad you never heard Psy’s "Gangnam Style" after the fad faded in 2012? Strike it from your collection with a thumb down. 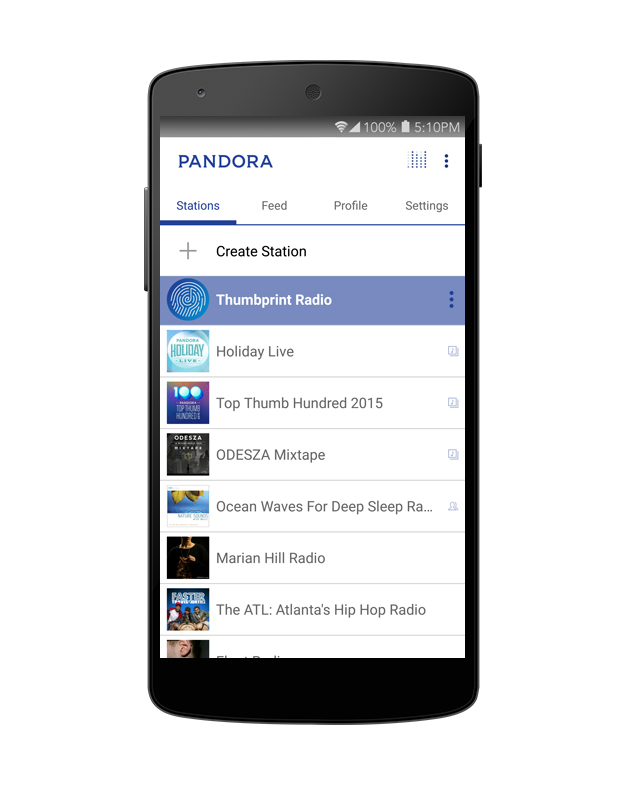 To qualify for Thumbprint Radio, your account needs to have at least three stations with four thumbs-up per station. Pandora says that 93 million people will qualify to see a Thumbprint Radio station appear in their account today. To put that in perspective, the service has about 300 million registered users and had 78 million active users in the month of November.

Pandora decided to exclude some genres of music from Thumbprint Radio since certain tunes might not meld with the overall sound of your station. These include children’s music, comedy, and holiday.

If you’re convinced that this collection of thumbed-up songs is an intimate glimpse into your deep love of free, still-limited-to-six-skips-per-hour music, you can share your Thumbprint Radio station with friends. Those friends can’t change the station’s contents, but the station will update via the cloud to reflect your latest edits as you listen and thumb.

Thumbprint Radio doesn’t count against the 100 stations you’re allowed to create within the service, so you won’t have to delete another station to make room for it.