We promise, we're not going to ruin anything

It’s been easy to smirk at the nostalgia-laden campaign for J.J. Abrams’ Star Wars: The Force Awakens. But in our franchise-heavy movie universe, Star Wars is unique in that it has always been a product of nostalgia. For all its forward-thinking technical effects, the original trilogy was George Lucas remixing westerns, World War II movies, and sci-fi serials; screwball romances and Kurosawa films. It was a series of stories inspired by and paying tribute to a childhood love of other stories. In that sense nostalgia has been the perfect lens — perhaps the only true lens — through which to revive the series. If A New Hope was made by people who grew up loving Flash Gordon, it’s only fitting that The Force Awakens is a movie clearly made by people that grew up loving Star Wars.

With Abrams bringing in Star Wars veteran Lawrence Kasdan to co-write The Force Awakens, and putting such vocal emphasis on the practical effects and characters that made the originals so memorable, there’s been no doubt that he’s been using his own personal passion, trying to reboot the franchise by taking it back to its origins.

The only question was whether he could stay on target.

First things first: this review is not going to spoil any plot details. And I mean any. From the opening title crawl to the final frame, Star Wars: The Force Awakens is a movie that has a sense of discovery in its DNA. It’s a film meant to be viewed without the audience knowing a single thing about it — and while I’m sure that subsequent viewings will bring their own discoveries and surprises, the first time you see this movie should be with as clean a slate as possible. The secretive marketing efforts and subdued trailers are part of a cohesive whole, and it has somehow, surprisingly, all worked — so if you’re looking for big reveals and a beat-by-beat breakdown, you’ll have to wait. (We’ll be delving into the details later this week after people have had a chance to see the movie.)

It’s impossible to evaluate The Force Awakens outside the dramatic ups and downs of the films it succeeds. When the first film took off in 1977, it captured a feeling: nostalgia, yes, but also a stirring call to action that could make anyone feel that just outside their door was the promise of adventure and undiscovered greatness. It was a feeling that was noticeably absent when Lucas dove back into the Star Wars universe in 1999 with The Phantom Menace. There were familiar names and design choices, but the sense of wonder, hope, and optimism that permeated the original films was swapped out for a strange combination of kid-friendly antics, dull political conversations, and an off-putting digital look and feel. Even when the prequels ended, it was the galaxy’s greatest anti-climax, nearly tarnishing the character whose story it was telling. The man that created Star Wars had somehow forgotten why his own movies worked, leaving the most ubiquitous franchise in film history without a custodian. 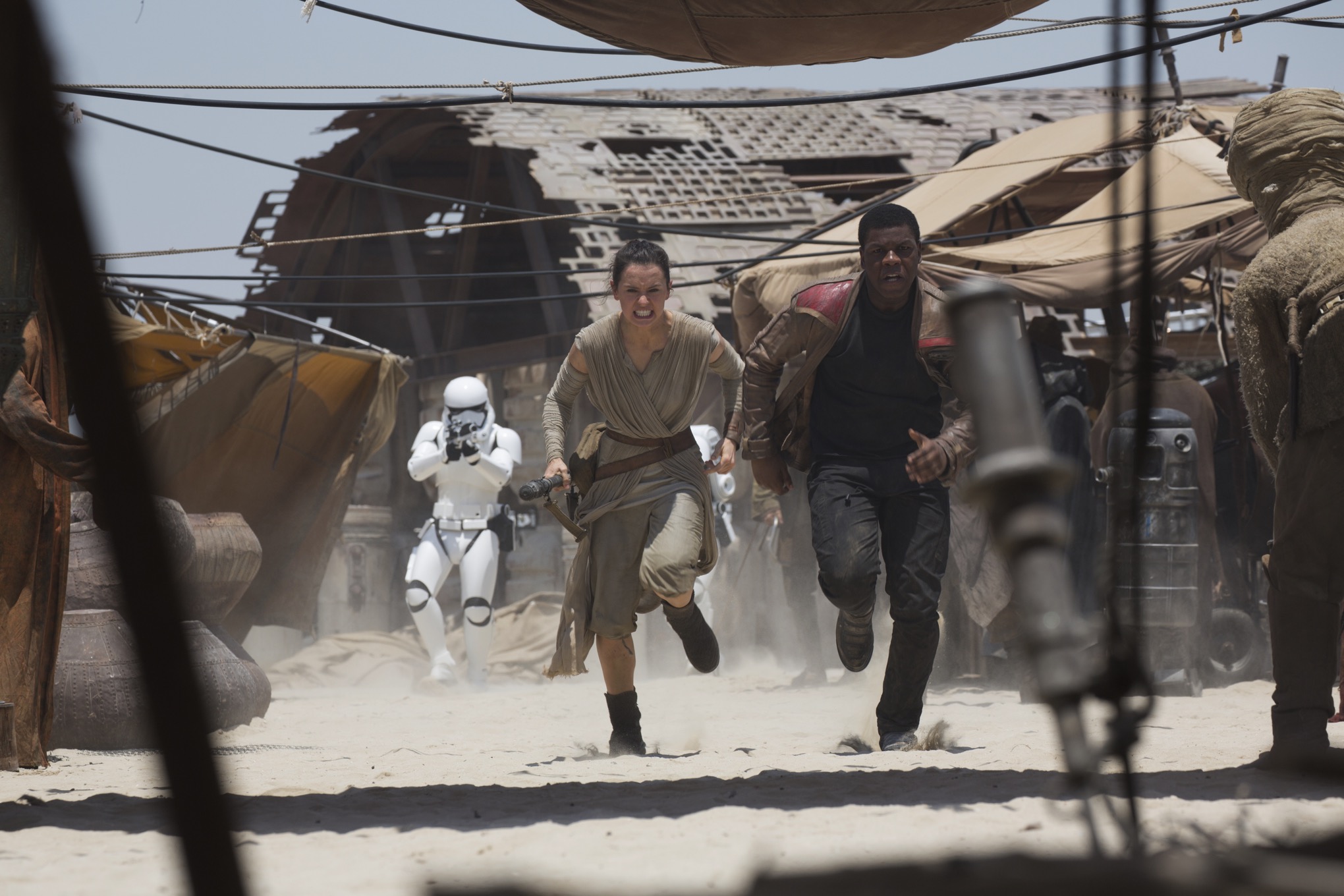 Without giving too much away, I will say The Force Awakens actually feels like Star Wars again, more so than any film since 1983. From the bickering back and forth of the characters — John Boyega and Daisy Ridley have a wonderful dynamic, ping ponging off one another in ways that feel both warmly familiar and surprising — to the measured use of familiar faces like Chewbacca, C-3PO, and yes, Han Solo and Princess Leia, The Force Awakens understands how audiences originally connected with Lucas’ films. If the prequels felt like a grab bag of ham-fisted shout-outs with shoehorned origin stories, Abrams’ film simply sets up shop in the middle of a long, ongoing narrative and tells its little piece. Despite the large scale, the approach feels small, almost humble — and it’s precisely how the original Star Wars worked when it opened in 1977.

The impact of writer Lawrence Kasdan in all of this can’t be overstated. If George Lucas is the originator of the Star Wars universe, Kasdan is the creative force that refined it into its purest form. Kasdan came on to rewrite The Empire Strikes Back after its original writer died, but went on to co-write Return of the Jedi while also tackling movies like Raiders of the Lost Ark before transitioning into his own directing career. Nobody has ever written Han Solo, Leia, or Chewbacca the way Kasdan has — he arguably captured the definitive takes on the characters in Empire — and the minute they appear on screen, it’s clear Kasdan has tapped into the same sense of raucous and rebellious fun he did so many years ago. (There’s a reason he’s co-writing the upcoming Han Solo spinoff with his son, after all.)

The impact of Lawrence Kasdan can’t be overstated

With all the familiarity that Kasdan brings, Abrams is able to carve out space as a new directorial voice in the Star Wars universe — while still paying careful attention to the conventions that have defined the series. He brings with him the same strengths he’s brought to all of his feature directorial efforts; above all else he is a master at clockwork storytelling, of setting things up and paying them off, with a visual flair and an ever-more-confident feel for action. Scenes from the trailers, like an X-Wing attack or TIE Fighter battle, are as thrilling and seat-clutching as some of the best work in the series, but without being tied to the VFX logistics of models and bluescreens; they go beyond the relatively traditional camerawork that defined the originals, while maintaining a sense of physicality the prequels’ digital creations sorely lacked. Abrams also understands that there’s a difference between having fun (the levity of his Star Trek reboot) and insulting your audience’s intelligence (the cartoonish gags and fart jokes of The Phantom Menace). The overall result is the film equivalent of that crazy, gyroscopic shot of the Millennium Falcon from the original teaser: familiar and earnest, with a whiz-bang layer of pizzazz and invention pulling things into the 21st century.

CGI certainly has its place — with varying degrees of success

But for all of his (many) strengths, Abrams still carries his weaknesses into The Force Awakens. He’s remarkable at putting together a cohesive cast and giving each of his characters their moment to shine (Oscar Isaac in particular does a lot with what he’s given), but the movie inevitably gets bogged down at times with egregious, over-expository plot dumps. On one hand, it’s to be expected — 30 years have passed since audiences have seen many of these characters, and people have got to get caught up somehow — but compared to how sleek most of the movie is, the moments stand out in stark relief. And while Abrams’ visual updates are welcome, at times they do feel like they go a bit too far. Not in a "This isn’t how Lucas would have done it" fashion; more like "C’mon, we already saw the Enterprise do something like this." (And that’s not even getting into the computer-generated characters. There’s a clear love of practical effects in The Force Awakens, but CGI most certainly has its place, with varying degrees of success.)

Still, the film is a remarkable achievement: Abrams and his collaborators have made a movie that feels resoundingly fresh and new by paying tribute to a style and story that is decades old. In the process, they’ve lived up to fan expectations of the name Star Wars, and largely undone the damage done to the property over the last 10 years (you can understand and enjoy every moment of The Force Awakens without having seen anything but the original trilogy, and no doubt that’s just how everyone likes it).

Abrams has largely undone the damage of the prequels

When he worked primarily in TV, Abrams was renowned as the master of the pilot. Whether it was Alias or Lost, he was able to effortlessly set up characters and stories that would play out not just over two hours, but over years — and that’s precisely what he’s done with Star Wars: The Force Awakens. While there’s no way to match the hype that has descended around the release of this film — it’s essentially a sequel 32 years in the making — as the credits rolled I found myself even more excited to see what Rian Johnson and Colin Trevorrow are going to do with the next two sequels. Unlike the original film, which wrapped up in a relatively tidy fashion, Abrams and Kasdan have set up a series of ongoing plot lines and hanging story threads that will give the new filmmakers endless opportunities in the years to come. They’ve become the architects of a new generation of Star Wars stories, and if The Force Awakens is any indicator, the sense of adventure and potential that resonated so strongly 30 years ago will now be available for a new generation, one more diverse and far-reaching than the series ever tried to address before.

The lightsaber fights are pretty cool, too.

For those of you who have seen the movie, check out a very special Vergecast where we discuss The Force Awakens. Be warned: There will be spoilers