The top feature our digital devices need, but won’t get anytime soon

This isn't an investment column, and I am not an investment adviser. But here's a free financial tip: if any company actually mass-produces a new, safe, practical, affordable, reliable, proven, much longer-lasting type of battery for digital devices, buy stock. Buy a lot of it. Because batteries are the key to every electronic device we now depend upon — especially smartphones and laptops — and they are the weak link in the system.

Some people can't get even a full day's use out of their smartphones and laptops. Others do, but with lots of anxiety about it. Many people find themselves scrambling for power outlets, or carrying costly, clunky extra-battery phone cases and power packs (which also must be frequently plugged in) to recharge their slender, light iPhones and Galaxies.

Except for the monochrome, essentially single-use basic Amazon Kindle, I don't know of another digital device used by a really wide swath of people whose battery lasts so long it's never on your mind.

batteries are the weak link in the system

While the capabilities, speed, and versatility of smartphones have advanced rapidly, battery longevity has increased much more slowly. For example, last year, when it introduced the A8 processor in its iPhone 6, Apple boasted that the phone's CPU speed had increased 50X and GPU speed by 84X since the original model went on sale in 2007. (Apple says its latest processor, the A9, on the iPhone 6S, is 70 percent faster at CPU tasks than the A8 and 90 percent faster at GPU tasks.)

Of course, the optimists out there could look at these disparities and say, rightfully, that it's amazing that today's iPhones (and competing phones) can deliver more battery life than their ancestors when they are so much more powerful and do so much more. And the battery-life figures aren't exactly comparable, since the voice networks and the meaning of "internet use" have changed substantially since 2007.

Even so, today's devices still use variations on the lithium-ion type of battery first commercialized by Sony in 1991. Obviously, it's been improved, but much of the gain in battery life has come from designing around the battery, by using more power-efficient hardware and software.

No entirely new type of better battery for these devices has yet come along to replace lithium-ion. And experts say you shouldn't hold your breath for that. "Lithium-ion is going to remain dominant" for at least the next few years, says Dr. Jay Whitacre, a battery expert from Carnegie-Mellon University in Pittsburgh. And he adds: "The existing set of solutions won't help companies increase their battery budget," the amount by which a tech company thinks it can tax the battery when designing a new device.

"there's no regular cadence of breakthroughs."

"What has to happen," Whitacre says, "is that we have to figure out how to use new materials" inside the battery. And, while researchers are indeed experimenting with new materials, nobody has been known to succeed in making a practical design, ready to market, that dramatically improves battery life for phones and laptops. At least from what we know publicly, there's no battery technology out there that seems likely anytime soon to, say, allow people to charge their phones only once a week.

That's because the problem of improving battery efficiency is utterly unlike the path semiconductor companies have taken, by engineering more and more processing power into smaller and smaller components. The battery problem is all about basic chemistry and physics. "You can look at the periodic table and see that there's a limited number of materials you can work with," says Dr. Doron Myersdorf, CEO of the Israeli company StoreDot, which is working on the smartphone battery problem. For batteries, there's no Moore's Law, which says that you can double the number of transistors in an integrated circuit roughly every two years.

Says one tech executive who works on the issue: "There's no regular cadence of breakthroughs."

This means that battery life will remain a pain point for consumers, especially in areas with weak or disrupted cell phone coverage, since constantly searching for a cell tower is a huge smartphone battery drain. It will also make it tougher for companies to introduce features and innovations that might break the "battery budget." Exciting new technologies like virtual reality and artificial intelligence might be constrained by battery life considerations as they become vastly better.

A change in psychology

Recognizing the problem of making big leaps in battery life, some companies are focusing instead on something else: greatly reducing the time it takes to recharge a device. The idea is to change consumer psychology. Battery life anxiety could be much reduced if people were confident that they could get back to a full or substantial charge in just a short period of charging.

Samsung, for instance, sells a $40 fast charger for some of its recent phones that it says can charge these phones from zero to 50 percent in 30 minutes. Apple's new $99 iPad stylus, the Pencil, can be plugged into an iPad Pro for just 15 seconds to get 30 more minutes of juice when it is about to die. And Qualcomm has incorporated a technology called Quick Charge into its mobile processors and chipsets. The latest version, according to the company, can recharge compatible devices up to four times as fast as conventional charging.

But perhaps the most dramatic effort is being made by that Israeli company I mentioned, StoreDot. It claims to have redesigned both the typical battery and charger, with new "organic" materials to create a system that can charge a typical smartphone in just minutes with enough juice to last all or most of a typical working day. 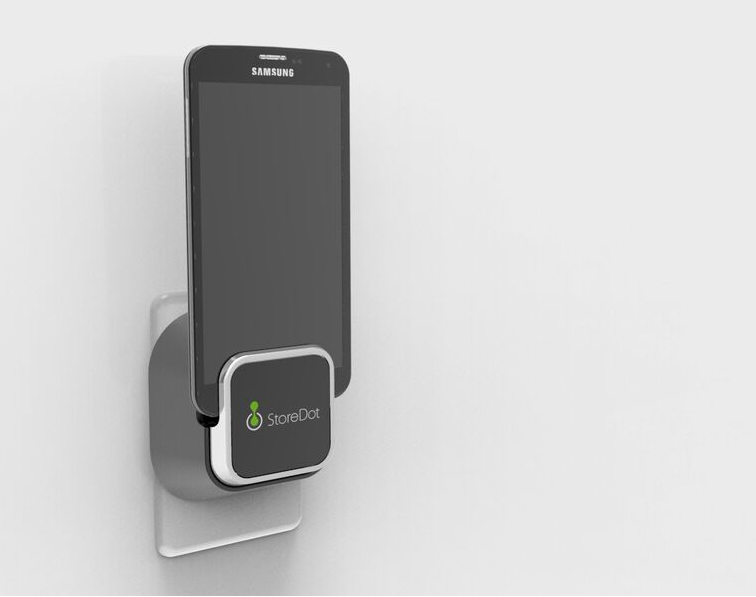 At last year's Consumer Electronics Show, StoreDot showed off a prototype which recharged a phone to 6 or 7 hours' capacity in just one minute. Let me repeat that: one minute. The products, called the FlashBattery and FlashCharger, will be back at CES next month, but with a bit less ambition. This time, the company will be showing off a version that takes a whole five minutes to charge a smartphone for 8 to 10 hours, according to its CEO Doron Myersdorf.

Why the change? Myersdorf says the company's invention requires a phone-making partner to agree to use StoreDot's battery and charger, which requires a special connector. And last year's charger — which looked like a bulky case — was just too large. By scaling down the charger, the company hopes to make its system more attractive to a partner, but had to compromise on the charging time. The new charger design is more like a cradle that plugs into a wall outlet and mates with the special connector.

Even five minutes for a full day's charge would be an amazing leap forward, possibly allowing smartphone users to worry far less about running out of power. After all, wrangling a spare wall outlet at the airport for five minutes is a lot easier than dominating one for an hour or more.

But StoreDot still doesn't have a phone partner, and even if it did, any new battery system like the company's would require surmounting manufacturing, safety, cost and regulatory hurdles. Myersdorf concedes "this is taking longer than we thought it would." Even so, the company is hoping to see its system in the market, as part of a smartphone, by late next year or early 2017.

The entire industry is dying to solve the battery problem, in one way or another. But, given the glacial pace of battery improvement, I'm not holding my breath.