High There, a dating app for weed smokers, is launching a new feature called The Hopper, a mobile party bus that can be summoned on demand by Denver-area stoners looking to smoke in public legally. With a driver, weed culture may finally expand beyond Cheetos-stained couches and video game binges of pop lore.

The 20-person limo-style hotbox is roaming the streets of the Mile-High City starting today, and has plans to travel to other states where recreational marijuana is legal in the months ahead. The bus isn’t just a vehicle, but a sanctuary to smoke more or less in public.

The bus will make stops at local events, dispensaries, hotspots, and, of course, restaurants. High There's executives say the Hopper solves two problems frequently encountered in states with legal weed: the lack of legal locations to partake in marijuana, and the risks of driving under the influence. 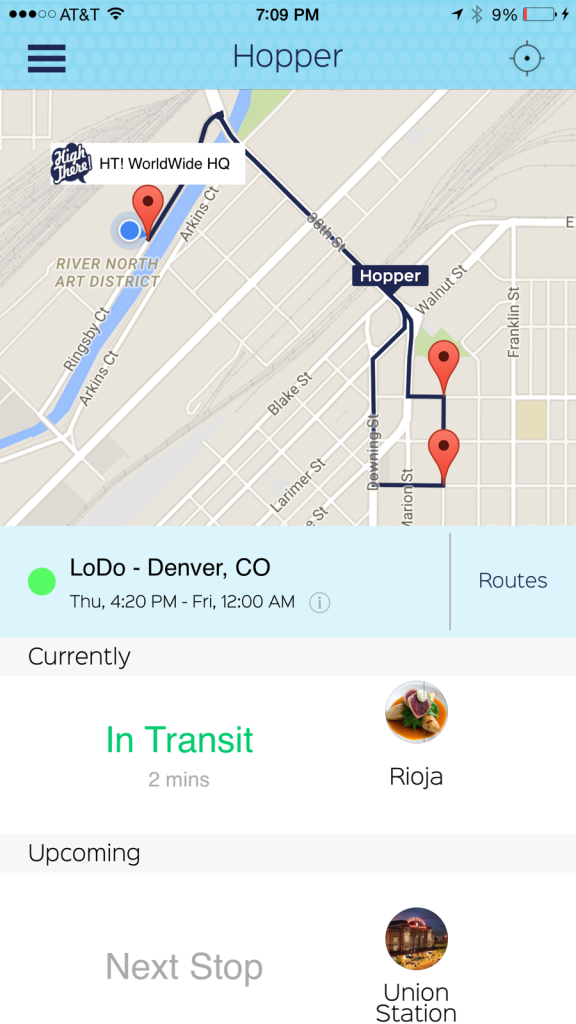 Since its launch almost nine months ago, High There has "established itself as not only a leader in technology, but also as the only responsible social network in the industry," said Darren Roberts, the company's co-founder. "The Hopper combines these two elements of innovative tech, and social responsibility, to create a killer utility that we know cannabis consumers in Denver will gravitate to as a fun and responsible way to meet people and consume."

While it is legal to purchase, possess, and consume marijuana for recreational use in Colorado, it is not legal to smoke weed in public. And even on private property, the law stipulates it not be done "openly or publicly." Weed cannot be smoked on a public bus, but taxis and limousines are okay. "If the taxi or limousine operator allows for it, marijuana may be consumed in the rear passenger area only," according to Colorado.gov. "It is illegal for drivers and front-seat passengers to use marijuana in taxis and limousines in Denver."

High There insists its party bus is well ventilated, to ensure the driver does not get a contact high. There is also a partition between the driver and the passengers. Also, High There isn't charging a fee for its service. "All people need to do is download the app and follow the Hopper," a spokesperson said. "They show the app to get on."

Which sounds all well and good, but then you'll be riding around with these friendly-looking chiefs.