When Motorola announced that it would be making a new sport watch, it was not unreasonable to think that it might be an improved version of something like the MotoActv, a 2011 release that won over a small but rabid fan base of workout enthusiasts. The MotoActv was described by one popular fitness-gadget blogger as a device that “completely and totally changed the face of sports watches,” with its “immense suite of features and functionality.”

But the $299 Moto 360 Sport is not an iteration on the MotoActv. The Moto 360 Sport is instead a sportier, GPS-equipped version of the standard Moto 360 smartwatch, with its round face, touchscreen display, wireless charging capabilities, and the promise of all-day notifications from your smartphone. The idea behind the sport watch is that it can offer an “untethered” workout experience (read: you don’t have to carry your phone with you), and is something that you could wear from your workout to work and it would look okay in either environment.

Unfortunately, as a sports watch, the Moto 360 Sport falls short. Right now you can only use the watch to track running, and that’s it. And the software experience is somewhat hamstrung by Android Wear, Google’s operating system for wearable devices.

Ultimately the watch gets squeezed into a “useful for a certain subset of people” category: it’s a nice sport watch for people with Android phones who love the look and functionality of the Moto 360 smartwatch but wish it had GPS, and also, who really like running.

For other people, the Moto 360 Sport will offer far fewer features than something like a Garmin or a Fitbit Surge. The Apple Watch has more health- and fitness-tracking options, though it’s limited to iPhone users. Even the Microsoft Band is a more formidable fitness tracker.

Can GPS, a sweat-proof band, and a reflective display make a sport watch?

So what’s actually new or different about the Moto 360 Sport? It has a black, white, or orange silicone band that’s sweat-proof and water-resistant. This silicone extends to the case of the watch, where it meets a metal bezel. The upside of this rubbery material is that it feels soft and comfortable on the wrist, even enough to sleep in (even though the watch is not a sleep tracker). The downside is that it collects an inordinate amount of lint, dust particles, pet hair, anything that happens to be around. You also can’t swap out the band the way you can with the regular Moto 360 smartwatch.

The sport watch’s display is one of its most interesting features. It’s a cross between your usual backlit smartwatch display and a front-lit reflective display, so that you can see the display even if you’re out running in sunlight. It’s covered in Gorilla Glass, so it’s durable.

It’s not the most gorgeous display I’ve ever seen on a smartwatch, but I could see it well outdoors. It also has some battery-saving properties, because of the way it switches to reflective display mode when you’re outdoors rather than using backlighting. The biggest annoyance with the display is how quickly it dims — about five seconds after you’ve hit the home button, which for some people isn’t enough time to see all that workout data.

The Moto 360 Sport continuously reads your heart rate from your wrist using optical sensors. And it has GPS for recording accurate distances — something that the Moto 360 smartwatch does not have. In fact, not many smartwatches do include GPS right now, with the exception of the Sony Smartwatch 3.

So, all of the components are there. But then there are the limitations.

If you have an iPhone, you can still pair the phone to the watch, receive notifications from your smartphone, and use the built-in Moto Body Running app on the watch. And you’ll still see your daily activity data on the sport-specific watch face. But the only way, currently, to see your workout data is to view it on the watch itself, with no options for sharing the data to iOS apps.

Let’s assume you have an Android smartphone. In general, Moto’s own apps offer the most optimal / least complicated experience with this watch. There’s the Moto Body app (also available on the non-sport smartwatch) that shows you a snapshot of your steps, calorie expenditure, heart rate, and more. The companion Moto Body app on Android gives a surprisingly granular view of your data, and with multi-colored check marks signaling whether you’ve met your goals in various categories.

Running watch, not a sport watch

The Moto Body Running app is specific to the sport watch, and it’s really the main event. It’s what starts when you hit the shortcut “Start” button on the watch face, and it’s what shows you your total workout time, pace, lap time, heart rate, and heart rate zone during runs, all with a few easy swipes across the reflective display.

There are some options to run micro versions of third-party apps on the watch, like Strava, but they’re generally pretty limited on smartwatches, acting as little more than remote controls for stopping and starting activities. And through the Moto Body app on Android, you can opt to share data to Google Fit, Strava, UA Record, and Fitbit.

But — and you knew there was a but — right now the watch doesn’t track anything other than your overall daily activity, and indoor or outdoor running. Motorola says it will be able to do more in the future, but won’t give a timeline for when it might track things like indoor and outdoor cycling, or “other” workout sessions (like cardio machines, weight lifting, or yoga).

I found this to be the biggest downside of the watch in the week that I’ve been using it. Unless you’re a hardcore runner, there are just some days when you don’t feel like running, and would rather work out in another type of exercise. The watch will still calculate your caloric burn and track your steps throughout the day, but you can’t stop and start any other kind of activity aside from running.

Moto needs to roll out other fitness-tracking features

And then there’s still the issue of battery life, despite the battery-saving display. It’s a problem that plagues almost every smartwatch maker, so it’s not as though I had tremendously high expectations for battery life on the Moto 360 Sport. But you’re looking at about a day of battery life, and definitely less if you go on long outdoor runs using GPS.

The Moto 360 Sport in its current form it seems to be designed for a tiny sliver of people — if you have an Android phone and if you want GPS in your smartwatch and if you’re a runner. Could that change? It could, if Motorola is able to roll out more fitness-tracking capabilities, and soon. But considering that existing trackers already do so much more, it’s a tall order asking users to wait for that.

Our review of Motorola Moto 360 Sport 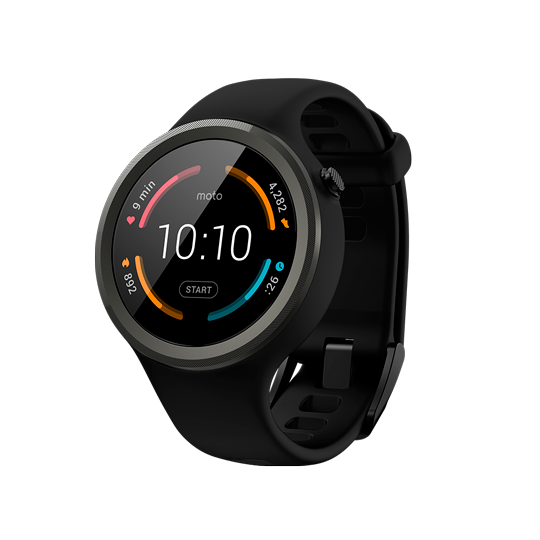