There are plenty of convertible or hybrid laptops out there now, ones that twist and flip and detach and flatten themselves into tablets. For Lenovo, this form factor has been an especially clever marketing ploy, bringing consumer recognition to a company primarily known for its business laptops. I’m talking, of course, about the Lenovo Yoga.

The Yoga, which was first introduced in 2012, can be propped up as a tented display, folded into an inverted laptop, or used as a full tablet with a keyboard smushed underneath it. Ask anyone who is remotely familiar with laptop trends, has shopped for a new Windows-based laptop in the past couple years, or has ever taken a yoga class (okay, not really), and they’ll probably say something like, “Lenovo Yoga — that’s the one that bends, right?”

Now there’s a new one on the market, the Lenovo Yoga 900. The Yoga 900 improves upon last year’s Yoga 3 Pro in almost all of the right ways. Most notably, it has a much faster processor and a couple more hours of battery life than the Yoga 3 Pro. And it ships running Windows 10, a cleaner and more user-friendly OS than Windows 8. If you’re in the market for a new Windows 10 laptop — and have more than $1,000 to burn — the Yoga 900 is definitely one of the top-of-the-line laptops to consider.

Just don’t expect its flexibility to be much more than a fun conversation starter or an occasional convenience. Over the past couple of weeks that I’ve been using the Yoga 900 I almost never felt the need to use it in anything other than standard laptop mode. 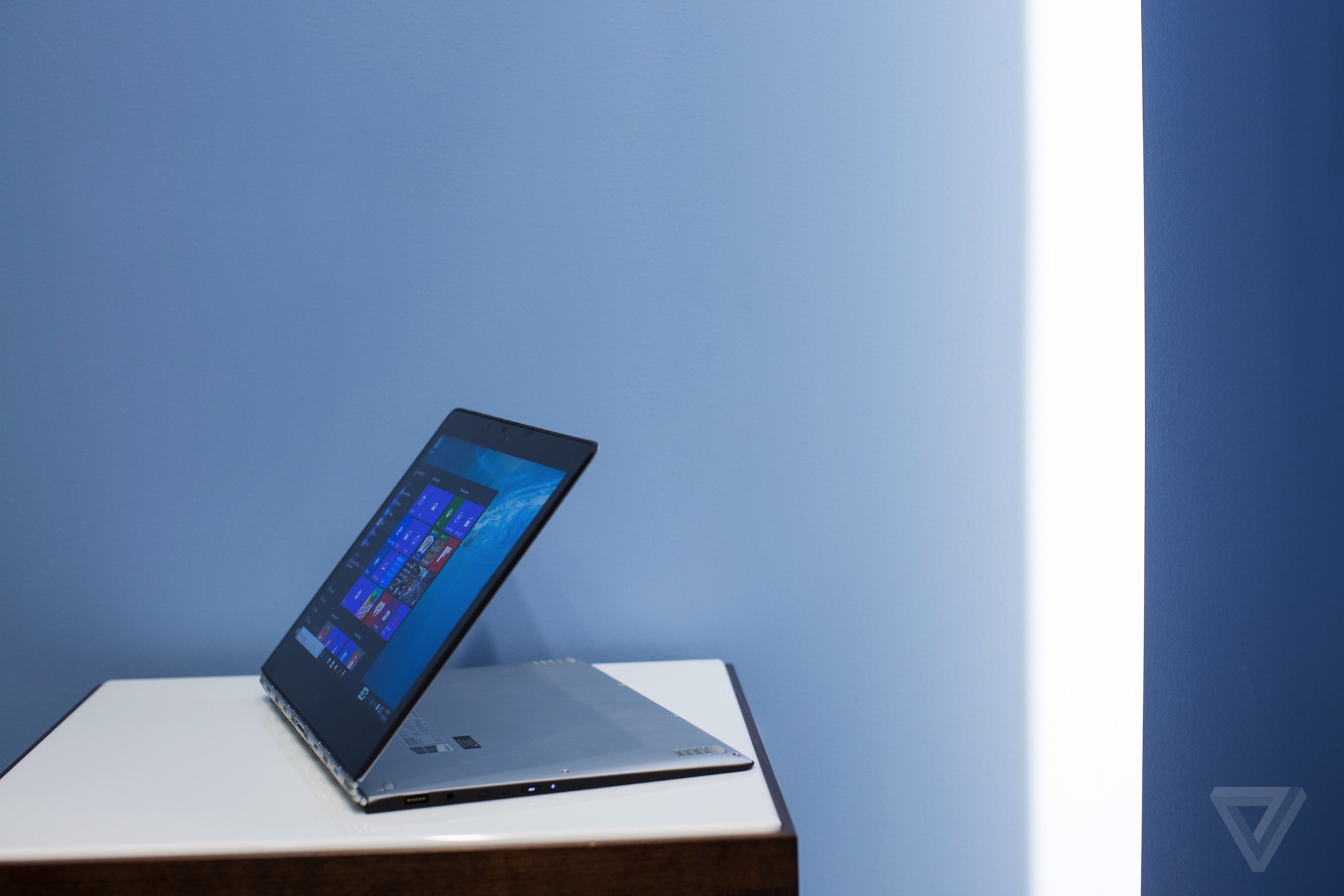 Lenovo says the Yoga 900’s metal watchband hinges — which are what make all of the bendiness possible — are refined slightly from last year’s model, though you can’t really see the difference. The laptop is made mostly of magnesium alloy. It has a roomy, leather-y palm rest. Like previous versions of the Yoga, it’s a good-looking, premium-feeling laptop. People checking out your laptop won’t think, "Look at that cheap plastic laptop," or, "Look at that black box" (hello, ThinkPad!). Lenovo has even gone as far as putting a "Yoga" emblem on the top of it, rather than the usual, angular Lenovo branding.

The beautiful display is constrained by its wide aspect ratio

It has a bright, super-sharp multi-touch display, with a resolution of 3200 x 1800 pixels ("QHD+"). It has a thick bezel running along the bottom, giving it a 16 x 9 aspect ratio, which is great for watching video but makes just about everything else a little awkward. Position another 13-inch laptop next to the Yoga — whether it’s a MacBook (16:10) or the new Surface Book (3:2) — and the Yoga’s display will look slightly compressed in comparison. 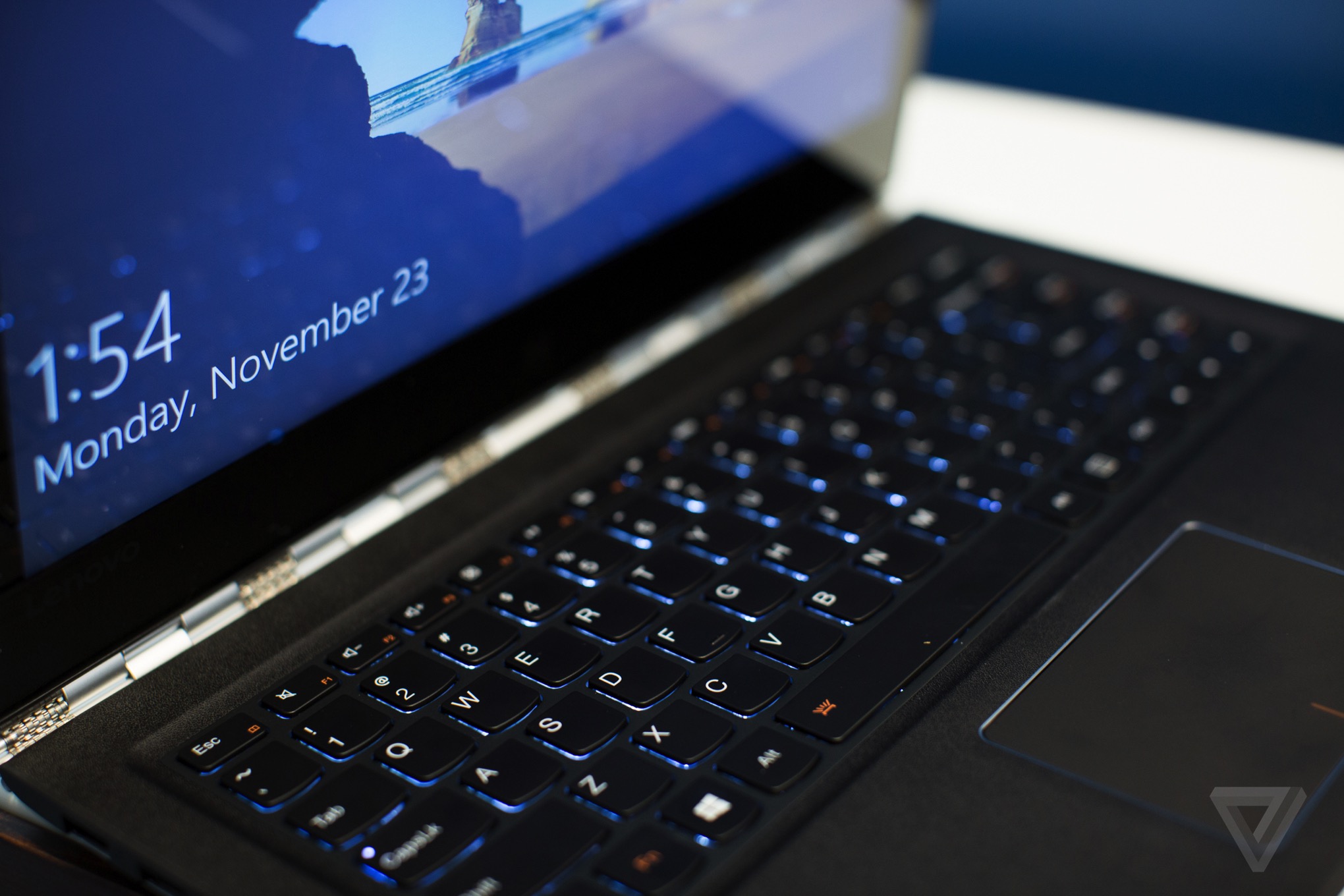 The Yoga 900 weighs 2.8 pounds and measures 0.59 by 12.75 by 8.96 inches. All of the standard ports are there, with the addition of a USB Type-C port. It is slightly heavier and thicker than last year’s Yoga 3 Pro laptop. But it never felt heavy to carry around. And when you consider the new stuff included in this one, it’s forgivable.

That "stuff" includes Intel’s sixth-generation Core i5 or i7 Skylake processor, a new chip touted for its speed, efficiency and graphics support; along with an Intel HD Graphics 520 GPU. The previous Yoga model got dinged for slowness; that wasn’t my experience with this one. In everyday use, the Yoga 900 was more than capable of running multiple apps, switching between tasks, and streaming video without any stutters. 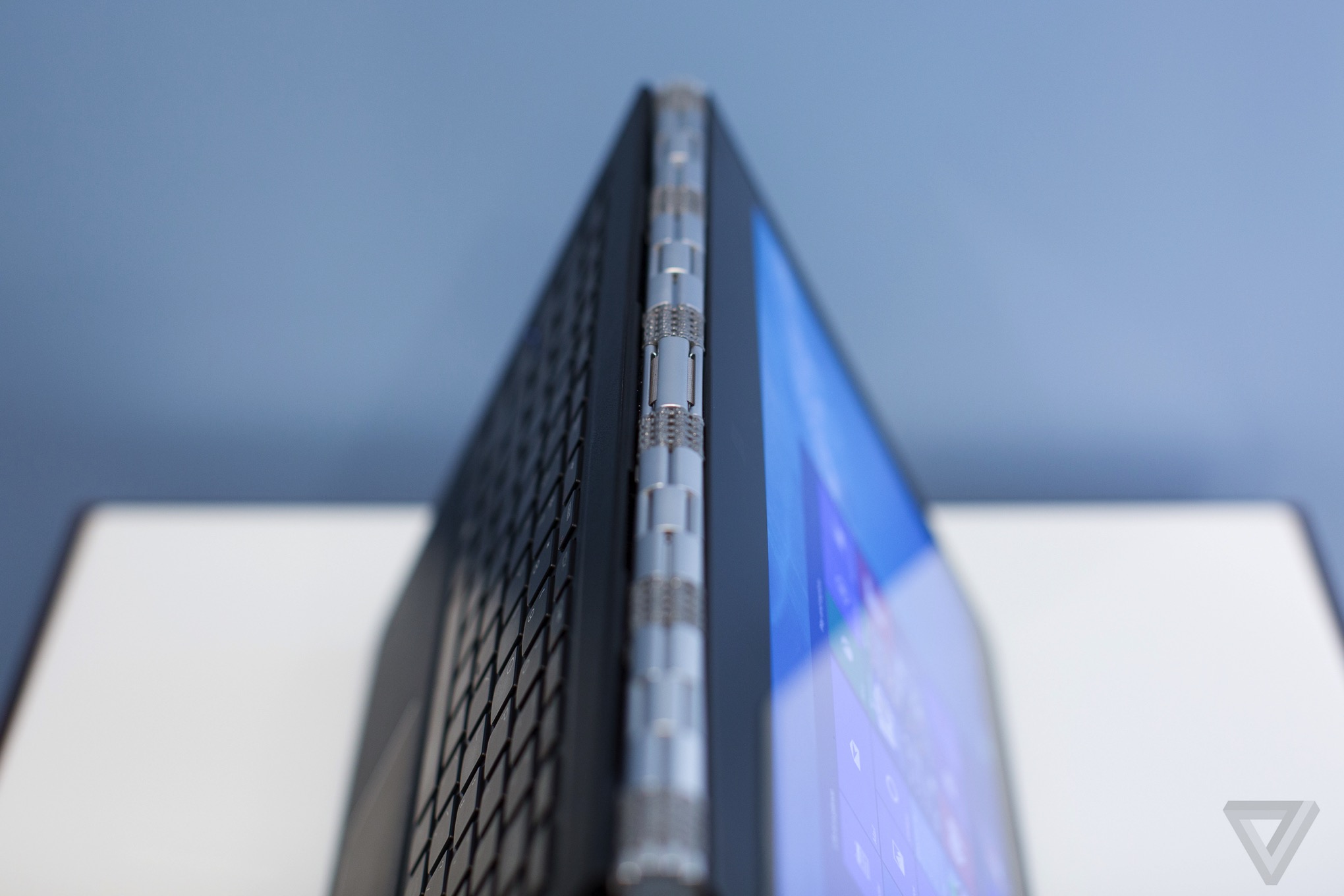 The Yoga 900’s battery life is definitely improved over last year’s Yoga 3 Pro, but compared to other laptops in this class, it’s still not the best. In a Verge battery test, the Lenovo Yoga 900 lived up to the company’s claim of nine hours. During a more normal day of use, running multiple apps, checking email, and browsing the web with some battery-saving settings turned on, it was inconsistent. Some days it lasted around five and a half hours, and other days closer to seven and a half. In either instance it doesn’t match the new Surface Book or recent MacBook Pro models.

Better battery life, but not best in class

And I didn’t love the keyboard and trackpad. The backlit keyboard on the Yoga 900 now includes a top row of function keys, something the Yoga 3 Pro didn’t have. It’s great to have these, and the keys themselves are comfortable, but the layout felt slightly cramped to me; the Shift button is small, and the Delete key feels just out of reach. The trackpad, occasionally, is unresponsive to clicks1. But overall, it’s a good laptop. So good, in fact, that it’s easy to forget about that whole you-can-tent-this-thing-on-an-airplane-tray feature.

It’s worth noting that the first review laptop I received had some significant trackpad issues and was wildly inconsistent in the first round of battery tests, something Lenovo said can be resolved with driver updates. A second loaner unit provided by Lenovo had an improved trackpad and lasted for just under nine hours in a follow-up battery test. 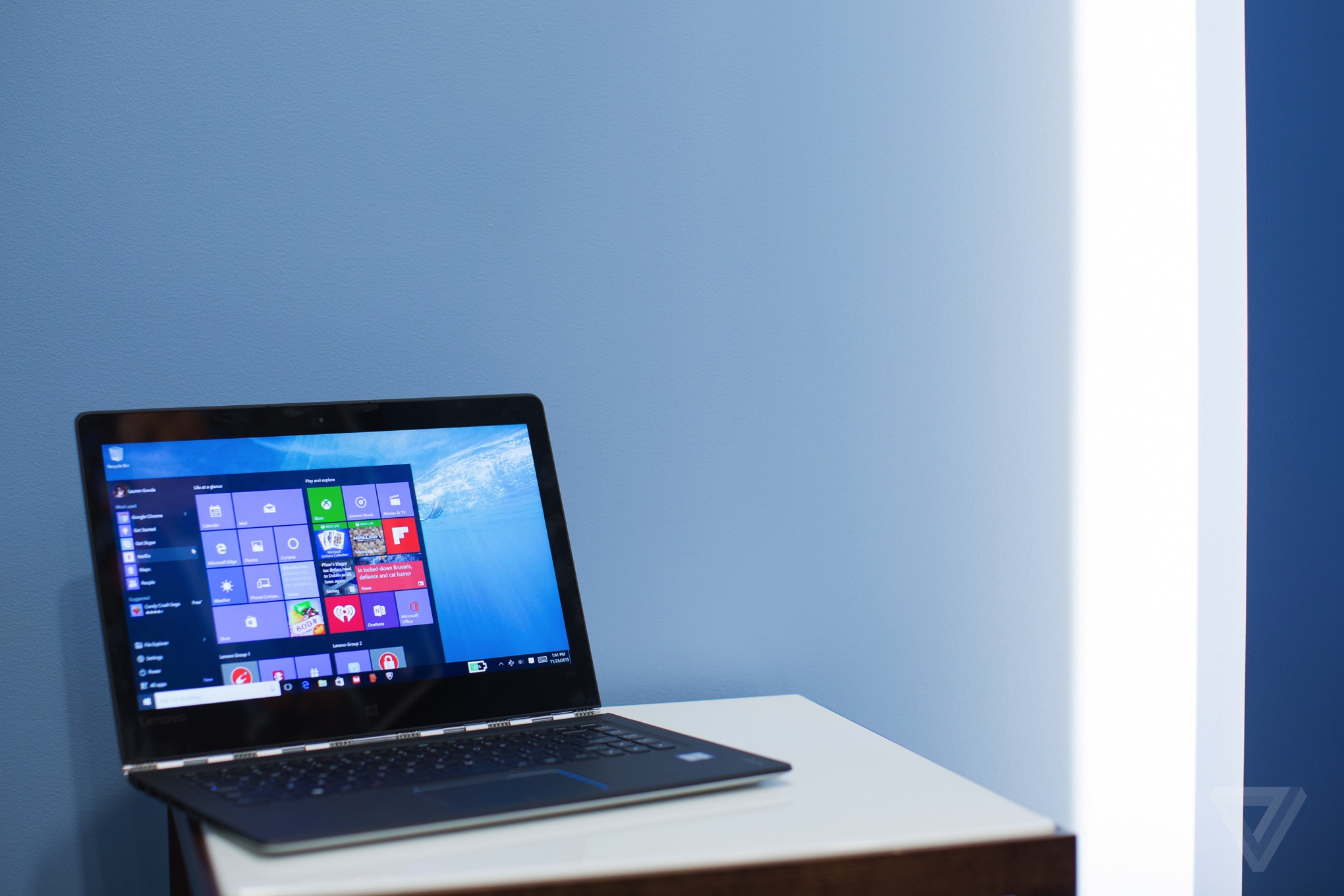 The truth is that the Yoga 900 is not very useful as a tablet. Sure, the keys become inactive once you fold the keyboard under the display, so if you can forget about the feel of scalloped plastic under your fingers while you’re holding it, it looks like a tablet. It immediately recognizes when you’ve changed modes, showing a pop-up message asking if you’d like to switch the Windows 10 layout from PC to tablet mode.

But holding the Yoga 900 vertically is awkward. And most apps aren’t really optimized for this layout. The text in Amazon’s Kindle app, for example, gets cut off at the bottom of the display. Using the Yoga 900 in landscape mode offers a more natural-feeling tablet experience, but even then, it felt heavy after watching just a 19-minute TED video.

The Yoga’s flexibility is still mostly a marketing ploy

"Tent" mode or inverted laptop mode, with the keyboard facing down, are more arguably more useful, because they prop up the display. But then you’re poking at the tablet’s virtual keyboard when you want to type, which is a fine option when you’ve only got a tablet on you, but feels silly when you’ve got an actual physical keyboard right there. Back to laptop mode.

Let’s put it this way: if you have more than $1,000 to spend on a new Windows laptop, you won’t be disappointed by the upgraded Lenovo Yoga 900. But you might appreciate it more for its basic technological improvements than for its bendiness.