The paparazzi are out to snap a picture of this bird

Peering through a pair of binoculars, I frantically scan through dense clumps of brown grasses and ferns covering the floor of Prospect Park. Around 20 people crowd around me, all of whom are doing the exact same thing; their heads dart back and forth as they silently survey the brush. It's a bright, crisp New York morning in the park, but the scene is mostly quiet — people only speak to each other in hushed tones.

"Do you see it?" someone whispers.

"I thought I saw something moving earlier," answers another.

We're hoping to catch a glimpse of a bird that — until recently — had never been seen in New York City: the painted bunting. The bird is the avian equivalent of a box of crayons. Its head is a bright sapphire blue, while its wings are a mixture of neon yellow and green. Underneath, it sports a big, beautiful mahogany belly. It's one of Mother Nature's more colorful works of art.

The bird is the avian equivalent of a box of crayons

For New York City bird watchers, the painted bunting has become a local celebrity. "It has more sex appeal than your typical brown birds," said Tom Stephenson, of the Brooklyn Bird Club, who has volunteered to be my guide. And indeed, the bird’s presence has turned this week into something like Fashion Week for the bird watching community. The enthusiasts I’m with are like paparazzi; there’s a strong camaraderie among the group, as well as a jostling competitiveness. The bird watchers suggest places to one another of where the bird might be, but it’s clear they won’t let anything stop them from getting the perfect photo. 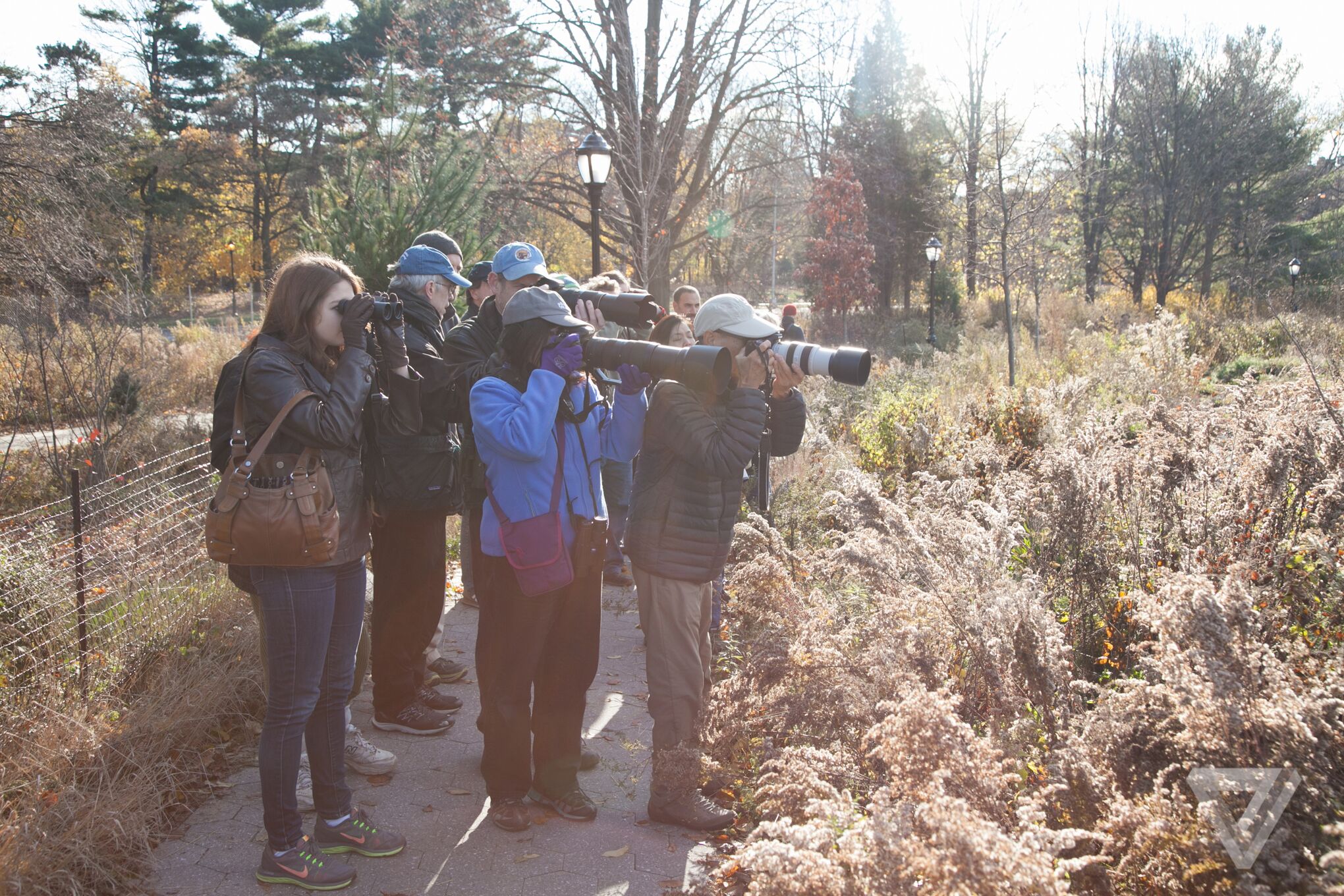 The bird was first spotted by Brooklyn resident Keir Randall this past Sunday. Randall was grabbing some coffee by the Prospect Park skating rinks, when he saw a flutter of color out of the corner of his eye. At first, he was afraid the bird might be a pet that had escaped from its cage. But this bird didn’t have rings or bands on its feet — common for caged birds — and its wings and tail feathers were smooth, suggesting it hadn’t been bumping against the sides of a cage.

Randall was so nervous when he took his first picture of the bird that his hands were shaking, he said. He then told a few bird watcher friends about the discovery. Word spread fast. Now bird watchers from all over the city are flocking to the park to capture the painted bunting on film. These last few days, hundreds of people have stopped by in hopes of seeing the winged superstar.

Usually, this species breeds in Texas, Oklahoma, or other southern states, and then heads to Central or South America for the wintertime. It's incredibly rare for a painted bunting to be in New York this time of year. Some have wandered into the parks of the city before, but those were either females or younger birds, which are a drab green color. This is the first time someone has recorded a fully grown male painted bunting — with its colorful plumage — in NYC.

No one’s sure why this avian guest is here. It's possible that strong winds blew the bird off its normal course while heading south, and when it reached the water around New York City, it decided to find a place to land rather than trek out across the ocean. "Birds will find whatever green area looks the most hospitable to them," said Stephenson. "That's why lots of migrant birds end up in Prospect Park or Central Park. Even Bryant Park."

Right now, Prospect Park isn't a bad place to live for the painted bunting. The warmer-than-usual temperatures here in Brooklyn make survival an easier task for the bird. Plus, the bird has been hanging out near a garden in Prospect Park with native New York plants that have a lot of seeds — snacks.

Unlike our fellow bird watchers, our photographer Amelia Krales only came equipped with a 200mm lens. Here we've zoomed in on the painted bunting. (Amelia Krales / The Verge)

These tall plants are where I’m stationed with the other 20 bird enthusiasts, all hoping to catch a glimpse of radiant color. The crowd is a mixture of men and women, ranging from middle-aged to early 20s. There’s no average bird watcher, it seems. I’m also definitely not as equipped as my bird-watching brethren. Many have come with long 400mm camera lenses and heavy binoculars. Tom even has a laser pointer to help guide people's vision to where the painted bunting might be. I showed up with only my eyes, but Tom lent me an extra pair of binoculars to help me out.

After 30 minutes of searching, one of the watchers lights up: "I saw it. It just flew past us." We creep along to where the bird touched down, moving stealthily so that we don't scare it — or prematurely alert the rest of the crowd we've found him. Through the thicket of grasses and ferns, I see his colorful feathers peek out. It’s him! A tiny, pigmented needle in a very large haystack. Camera shutters click in rapid-fire succession; the bird may as well be doing a runway strut for an audience of fashion magazine photographers. At one point he snacks on some seeds; watchers squeal with delight. I'm just as giddy as the rest of them. Though this is New York City, where movie stars, politicians, and other VIPs walk the streets, I’m starstruck by a small neon bird, hiding among the shrubs of Prospect Park.

Tom Stephenson, member of Brooklyn Bird Club
Most Popular
From our sponsor
Advertiser Content From