It's almost 2016, and we still haven't answered Kylie Jenner's questions about chemtrails

It's almost 2016, and we still haven't answered Kylie Jenner's questions about chemtrails

Keeping Up with the Khemtrails

We're about seven hours away from a brand new year here on the East Coast, and people around the world are looking forward to 2016 with optimism and good cheer. Some of us are ready to focus on resolutions — mine's eating less dime store candy, a difficult task but one I can handle — and some of us are just looking forward to midnight Chinese food and celebrity tweets.

Unfortunately, a few people are going into the new year disappointed. Maybe they don't have someone to kiss when the ball drops this year; maybe their holiday season wasn't as joyous and relaxing as they'd hoped. Some of us are carrying unanswered questions with us into the new year, mysteries that are boring holes into our hearts with every day they remain unsolved. Famous teen (and amateur conspiracy theorist) Kylie Jenner knows that feeling.

Kylie posed this set of bold questions regarding chemtrails — the condensation trails spewed by high-flying jets that linger in the sky, trails that some people contend are stuffed with toxic, malicious chemicals — on May 26th of this year, meaning they've gone unanswered for over seven months. As The Verge's chief Kardashian-Jenner correspondent, I was keeping tabs on Kylie's quest for answers; I was planning on revisiting her search for justice on May 26th, 2016, the anniversary of her initial request. My plans changed this afternoon when Jenner's half-sister Kim Kardashian West decided to give her sibling one last burst of 2015 promotion: 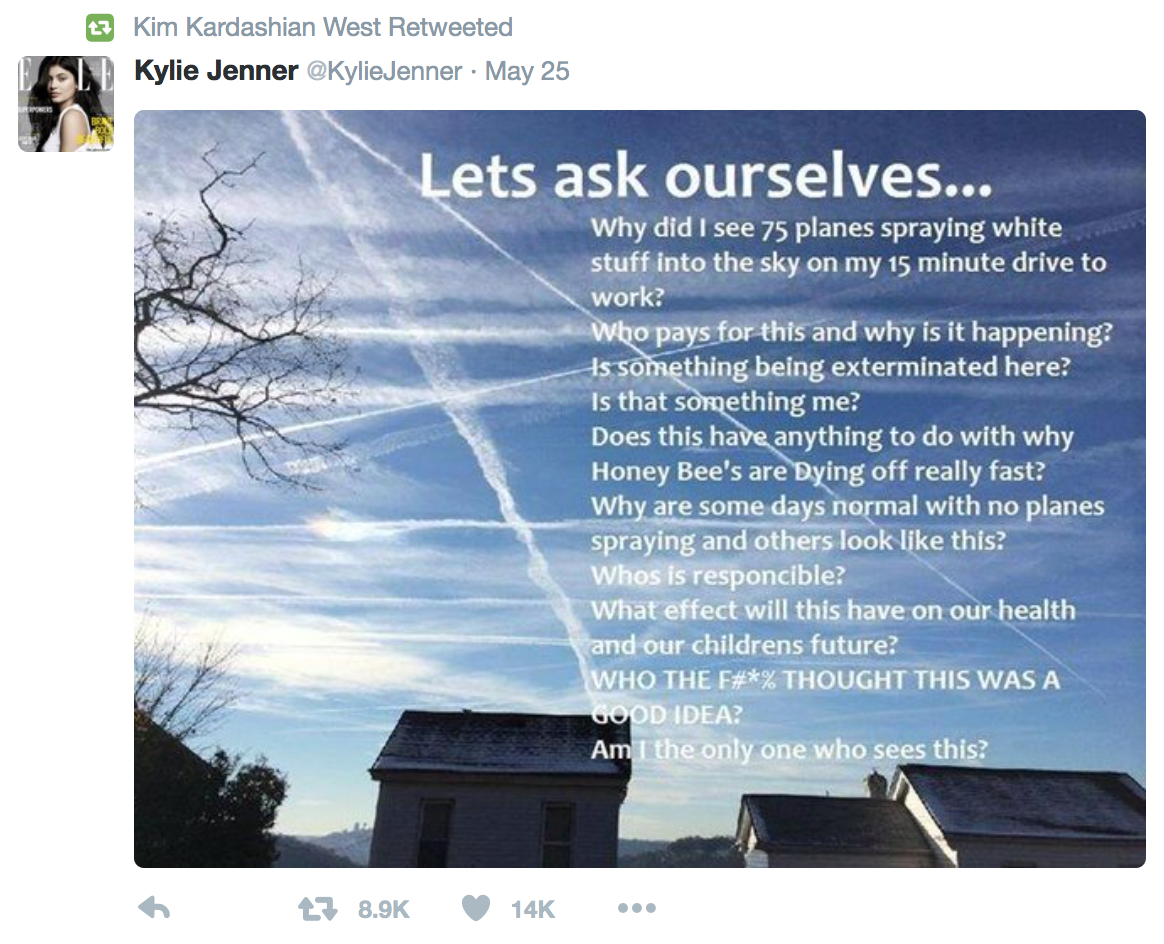 Kim's decision to help her sister helped me realize there's no better time to evaluate Kylie's questions than New Year's Eve. This is a time when people around the world are reflecting on the progress and mistakes they've made over the last 365 days, resolving to help build a better future in some small way. The least I can do is quickly run through everything Kylie's asking. Let's evaluate:

It's clear at this point that I'm probably not going to provide Kylie with any satisfactory answers regarding her unexplained phenomena any time soon. With that in mind, I'm hoping Kylie, Kim, and the rest of the Kardashian-Jenners resolve to get this whole conspiracy theory thing out of their systems. They're all busy with their assorted TV shows, social networks, and business ventures. Tweeting about chemtrails just gives trolls who don't respect their savvy and acumen another reason to write them off. They're better than shoddy, misspelled memes.