Twitter has published its annual year-end review, highlighting the tweets, hashtags, and emoji that were most popular on the social network in 2015. As you might expect, the company's selection of its "most influential" moments spans both world events and social campaigns, taking in the terrorist attacks on Paris, the refugee crisis in Europe, and the legalization of same-sex marriage in the US. The Black Lives Matter campaign and the flyby of Pluto by the New Horizons probe are also mentioned, as are national elections in the UK, Canada, and India, the arrest of Ahmed Mohamed and (of course) #TheDress. 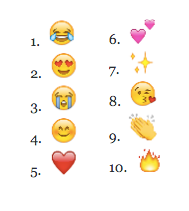 The social network also published a number of top ten lists for the most frequently tweeted emoji and hashtags. And for fans of the "face with tears of joy" emoji, pleased by its selection as word of the year by Oxford Dictionaries (not the same as the Oxford English Dictionary), there'll be more, well, tears of joy. The emoji was Twitter's most popular in 2015, followed by "smiling face with heart-shaped eyes" and "loudly crying face." Thankfully, "clapping hands" and "fire emoji" also made the list in the ninth and tenth place respectively, proving that Twitter is still home to retorts and burns as well as hearts and tears.

Things are a little less balanced when it comes to 2015's most retweeted tweets, with half of the top ten coming from past and present members of One Direction. Harry Styles' message to fans after Zayn Malik's departure from the band ("All the love as always. H") takes the top spot with more than 717,000 retweets and 741,0000 Likes, followed by tweets from Malik himself and Liam Payne. Barack Obama's message celebrating same-sex marriage becoming legal nationwide in the US is the first non-One Direction tweet in the top ten and the fourth most retweeted, before we return to 1D with a message from Louis Tomlinson: "Our fans support really has been a different class ! Huge love to you guys !!"

Today is a big step in our march toward equality. Gay and lesbian couples now have the right to marry, just like anyone else. #LoveWins

Other inspirational tweets of one sort or another round out the top ten, with a message of prayer and support from the then-newly-crowned King Salman of Saudi Arabia in 6th place (this may seem unusual, but Twitter is very big in Saudi Arabia, with the country home to 40 percent of all active Twitter users in the Arab region), followed by some straightforward advice from Kanye West ("Please: Do everything you possibly can in one lifetime."). After another One Direction tweet (Niall Horan this time), the top ten rounds out with an ending and a new beginning: Leonard Nimoy's poignant final tweet is the 9th most retweeted, while Caitlyn Jenner's "welcome to the world" is number 10.

Here's Twitter's roundup of the year: