Have you ever looked at a Roger Dean painting and just dreamed? Imagine what the view would be like from atop one of those impossible floating islands, or how it would feel to walk across a stone bridge that leads you toward a rock formation twisted into the shape of a cathedral. Xenoblade Chronicles X, which is available now on the Wii U, is probably your best chance to find out. It throws you into an alien world — one of awe-inspiring scale, filled with beautiful alien creatures and wondrous landscapes — and asks you to explore. It’s often frustrating, and it takes a lot of patience to make your way through, but there’s really nothing that can compare to its sense of scale and wonder.

Xenoblade Chronicles X is an open-world role-playing game, and the spiritual successor to the Wii’s Xenoblade Chronicles (which was remade for the New Nintendo 3DS earlier this year). The two games take place in a similar world and play a lot alike, but X tells a completely new story. You take on the role of one of the remaining few humans alive — after a battle with a murderous alien species, the last of humanity is living on a strange new planet, and has turned a massive crashed spaceship into a settlement known as New Los Angeles. It’s a cool set-up, but you can ignore the entire story, really; it amounts to some cliché sci-fi tropes bundled together with a cast of largely forgettable characters.

What that narrative set-up does accomplish is giving you a reason to venture outside the settlement and explore the planet. One of the most important activities in the game is finding new areas and placing probes, which provide information about the land while also letting you mine for important resources. Your new home planet Mira is as vast as it is dangerous, and you’ll need to learn everything you can about it. The best way to do that is to explore. 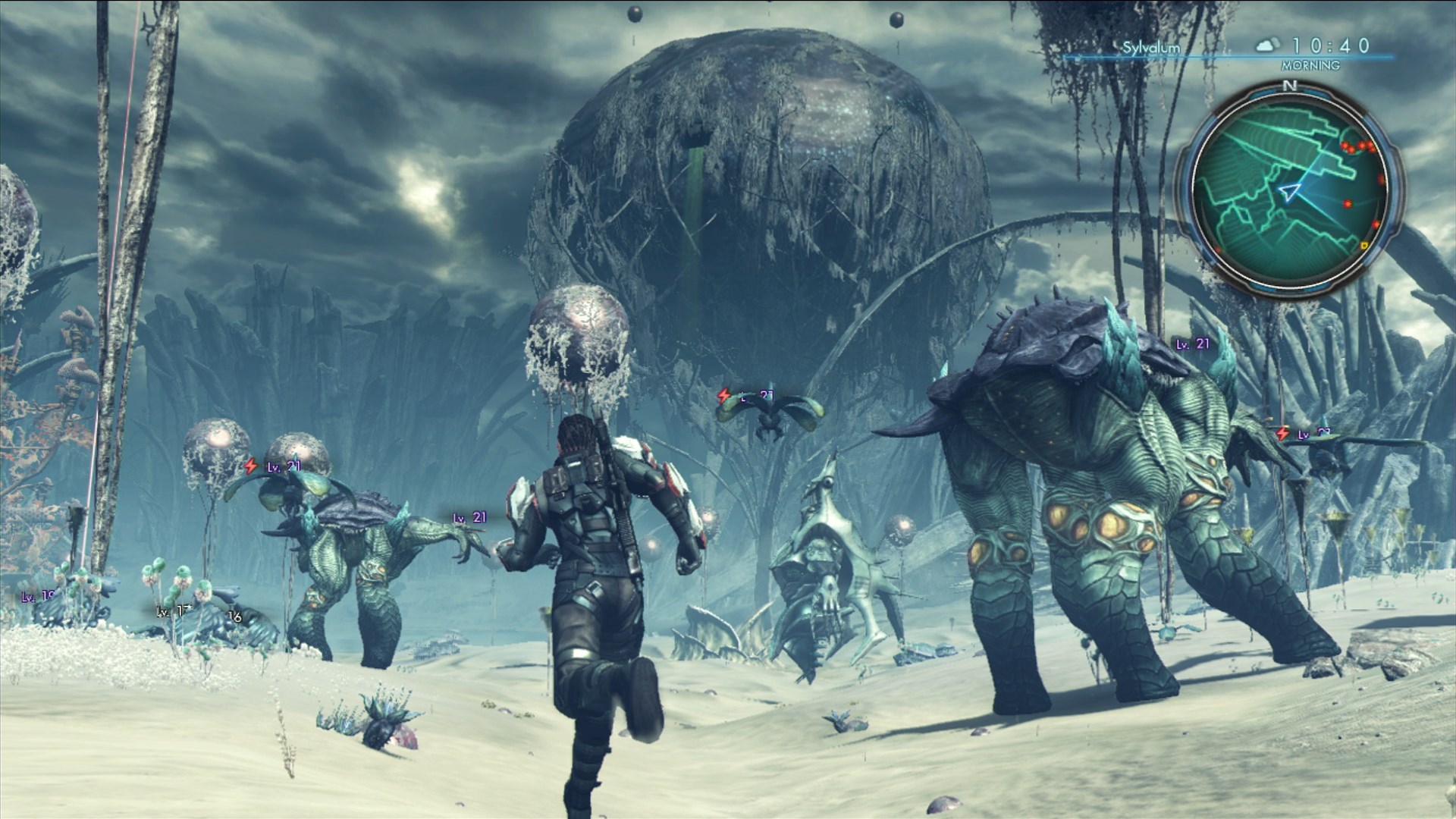 Mira is a massive, diverse place. Even a few dozen hours into the game I still find myself stopping just to gawk at a new discovery. One of the first things you’ll see when you leave New LA is a huge, brontosaurus-like creature grazing in a field. You can wander right up to the peaceful beast, and it pays you no mind. Not much later, an even larger animal — maybe 10 times the size of the one you previously thought was big — can be found taking a drink from a nearby lake. Its head alone is about the size of a small bus. These moments make you feel tiny, insignificant. It’s rare that a massive creature in a video game ignores you, but in Xenoblade Chronicles X some are so huge you aren’t worth the bother.

It’s more than just the creatures that make it such a wonderful world to visit. Mira is made up of five continents, each with a distinct look and feel. Venturing through the world feels like digging through a history of sci-fi art, be it the Roger Dean-inspired rock formations or the hazy, colorful skies that looks like they were painted by John Harris. One continent, filled with bioluminescent creatures and twisting trees, makes you think of Pandora; another, the token desert area, is what I always imagined Arrakis looked like. There are completely original creations, too, like the whale-like creatures that fly peacefully through the air on gigantic wings, or the towering moose-like animals that look like they’re made of old trees and bits of earth. Even the military gear is amazing to look at. You can outfit your character in cool battle armor and eventually pilot a mech, and it all has the style of military sci-fi anime like Knights of Sidonia. And if you wander the streets of New LA, you’ll find everyone drives a car that looks like it was designed by Syd Mead.

This combination of incredible art direction and sheer scale pushes the Wii U to its limits. One of the more annoying things about the game is the constant pop-in; you’ll venture into what looks like an empty area, only for a group of enemies to suddenly appear in front of you. The characters also look startlingly out of place. While you can put them in sweet-looking gear, their faces look ripped out of a Gamecube-era RPG. Your best option is to buy a helmet for everyone in your party. These are small bothers, but they stand out in an otherwise gorgeous game. 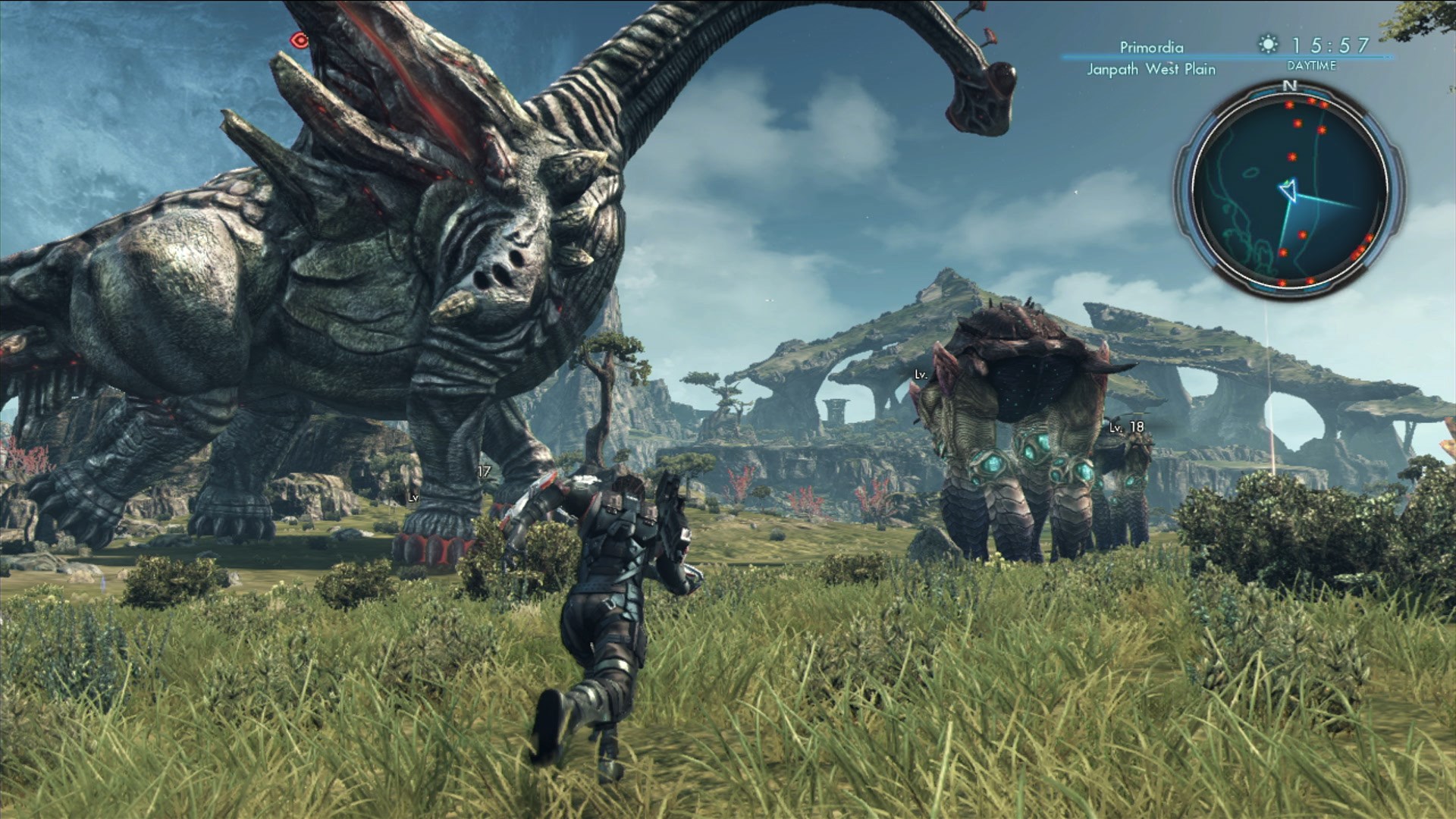 There’s a lot more to Xenoblade than just its beauty. Maybe too much, in fact. Xenoblade is a deep, complex experience, but it’s also one that gives you far too little information, and often forces you to grind for hours to make any real progress. Take the way experience works, as one example. Like in every other RPG, your character gains experience from doing things, whether it’s completing missions or killing alien monsters. But in Xenoblade Chronicles X you have to worry about more than your own character’s progression through the game. You also have a BLADE ranking — which shows your place in an elite military organization from New LA — as well as an affinity ranking that shows how close you are to other characters, and field skills that cover your proficiency with mechanical engineering, among other things.

Ignore any one of these — which is easy, given the terrible, convoluted menus and lack of any real tutorial — and you’ll find yourself stuck. You might not be able to take on a mission because you’re not friendly enough with another character, or you might not be able to place an exploratory probe because your mechanical skill isn’t at the right level. The only solution is to grind through Xenoblade’s many side missions. These, too, suffer from a lack of any real information (they’re also repetitive and unimaginative). You’ll be told to gather a certain item, but no indication of where it might be other than what continent it's on. Given the sheer size of the world, that’s like telling someone to find a rock in the Grand Canyon. I spent the better part of the weekend thwarted by a mission that needed a specific mineral, only to discover, several hours later, that you could only get it by mining a particular spot I hadn’t yet probed. Once I figured it out, I still had to wait hours more for the mining operation to generate all of the resources I needed to fulfill the mission.

The result of all of this needless complexity is a game that requires a lot of patience. Xenoblade isn’t the same as other open-world RPGs, like The Witcher 3 or Fallout 4, where you can focus on the world and story and still have a good time. Here, you need to be aware of the minutiae, otherwise you’ll be stuck. And understanding everything takes a very long time. It wasn’t until about a dozen hours in that I realized how exactly the maps worked, and after more than 25 hours I still didn’t have a firm grasp on mining. Even once you have an understanding of the game and its myriad systems, you’ll still often come against walls. The game has a strange habit of throwing overwhelmingly powerful enemies in among groups of more docile ones. On more than one occasion I found myself slaughtering waves of violent beasts in order to level up, only to be killed by some giant, six-armed monkey in a single hit.

I’ve never been as awed and bored by a game as I am with Xenoblade Chronicles X. At times, it feels like I’m running around for no reason, killing bad guys and hoping an item will drop so I can complete a mission, before moving on to do more of the same. But the moments of exploration and discovery are some of the most thrilling I’ve had in a game in a very long time, revealing an imaginative world that previously only existed in my head while reading old sci-fi paperbacks. It’s a shame you have to work so hard to discover those moments, fighting your way through tedium to experience awe.

One of my absolute favorite Roger Dean paintings is a piece called Center of the Earth. A bridge of brown and yellow stone sits in the foreground, with a seemingly unending wall of strange, twisted blue rocks behind it. Only when you look at the painting closely do you see three small blotches, almost dots, that represent people walking across the bridge, absolutely dwarfed by their alien surroundings. That’s what it feels like to play Xenoblade Chronicles X.

Xenoblade Chronicles X is available now on the Wii U

Read next: Xenoblade Chronicles 3D is worth buying a New Nintendo 3DS XL for