When he was working on Left 4 Dead, Phil Robb, creative director and co-founder of Turtle Rock Studios, spent a lot of time looking at disturbing images. The game took place in a zombie-ravaged, post-apocalyptic world, and in order to make the undead look as real as possible he forced himself to view all manner of gory, grotesque photos. You probably wouldn't want to check out his browser history. He even had a folder on his computer labelled "warning: don't look at any of this stuff if you're squeamish."

For the studio's next game, the monster-hunting shooter Evolve, his Google search results were a little less disturbing. Instead of looking at mutilated bodies, he found himself checking out wildlife for inspiration, particularly the dark and twisted creatures from the deep sea. The crooked, pointy teeth and eerie bioluminescence of the anglerfish were a particular source of inspiration.

"Nature comes up with some pretty fucked up shit," he says. 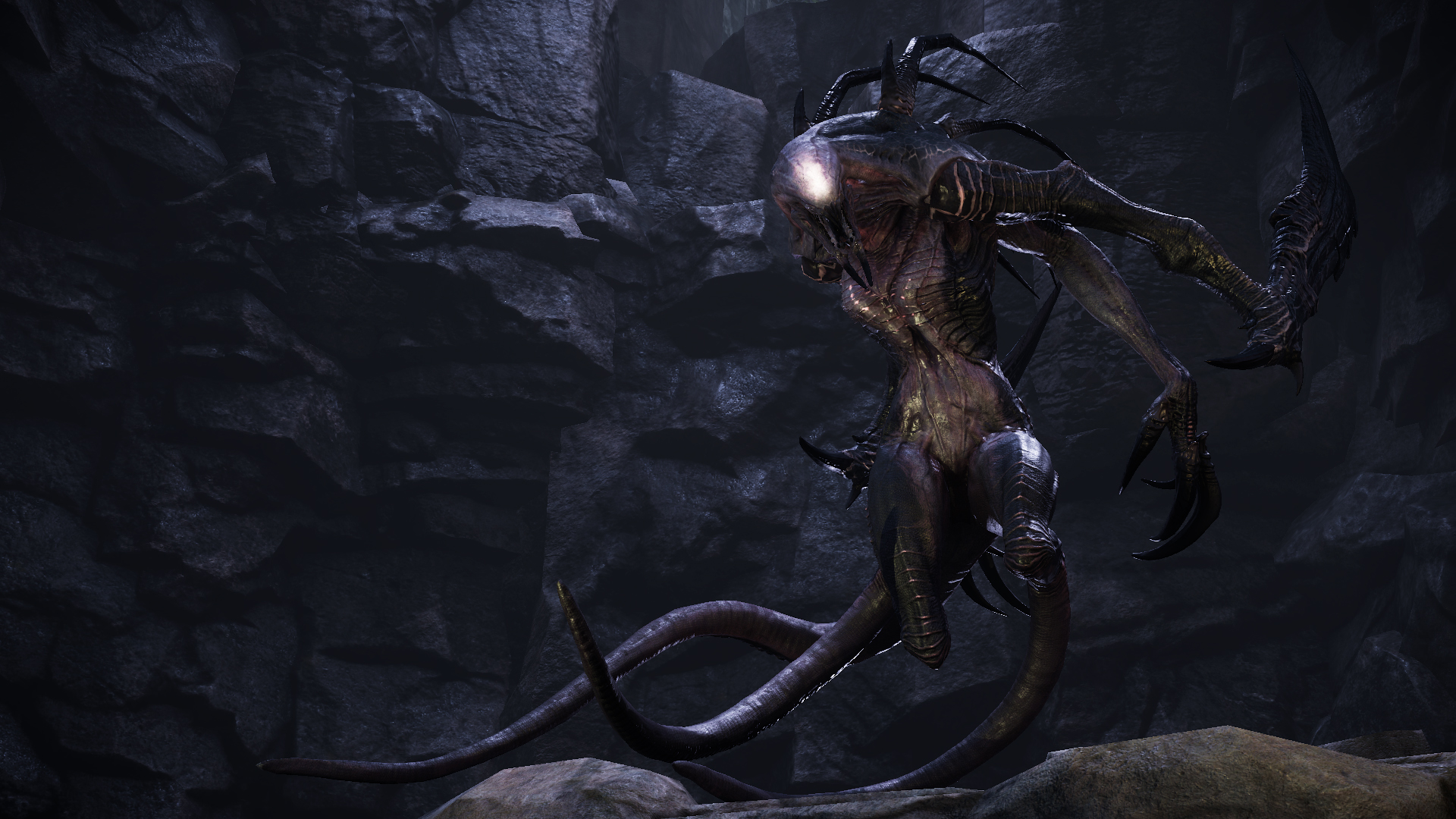 Like Left 4 Dead, Evolve is a first-person shooter that forces players to form small teams and fight alongside each other. But whereas Left 4 Dead took place in a world inspired by 28 Days Later and George A. Romero movies, Evolve is more of a monster movie turned into a cooperative FPS. "It was always a little bit of King Kong and a lot of Predator," says design director and studio co-founder Chris Ashton.

"There are a lot of deep sea creatures that are very scary-looking."

Evolve takes place on a remote alien planet in the process of being colonized by humans. It has sort of a frontier sci-fi vibe — the developers cite Joss Whedon's Firefly as a big inspiration for the setting — and these settlements have found themselves besieged by massive monsters. Four players take on the role of hunters trying to eliminate these creatures, and the twist is that another, fifth player is in control of that monster (the game's logo is a sly hint at its four-versus-one theme). The game features three main monsters at launch (a fourth, the Behemoth, will be available as downloadable content later this year, and is also available at launch to those who pre-order the game), and each was chosen based on some very specific abilities. The first monster you can play as is called the Goliath, and it's the most straightforward of the bunch.

"If you asked 10 people in a room what they think a monster should do in a game, most of them would say they should be able to punch and throw stuff and breathe fire," says Ashton. "And those are the things that Goliath does." Because of this, Goliath's design is also the most straightforward — he's vaguely human, sort of like a bodybuilder crossed with a giant lizard.

But from there the designs get more complex. For the Kraken, the team wanted a creature that could harness electricity, and so they started looking at eels and other sea life for inspiration. "There are a lot of deep sea creatures that are very scary-looking," says Ashton. "So it was a lot of fun to look at one of those fish and say 'why is that scary?'" The resulting creature has a head like an octopus and horrifying eyes that light up in the dark — it's like the most realistic version of Cthulhu you could imagine.

The third monster is the smallest: the quiet, stealthy Wraith. "We had a bunch of ideas for teleporting around and spawning decoys," Ashton says of the character's genesis. "That led to us thinking about sirens, we started thinking about mermaids being very deceiving and calling the hunters to their doom." Wraith's defining ability is something called an abduction: without warning it can swoop in and pull one of the hunters away from the rest of the pack, violently taking them hundreds of meters away. "That's a really classic monster movie moment that we wanted to capitalize on, and it can be very freaky when that happens," explains Ashton. "If you're the guy that gets dragged away from your team, you're in a real panic." 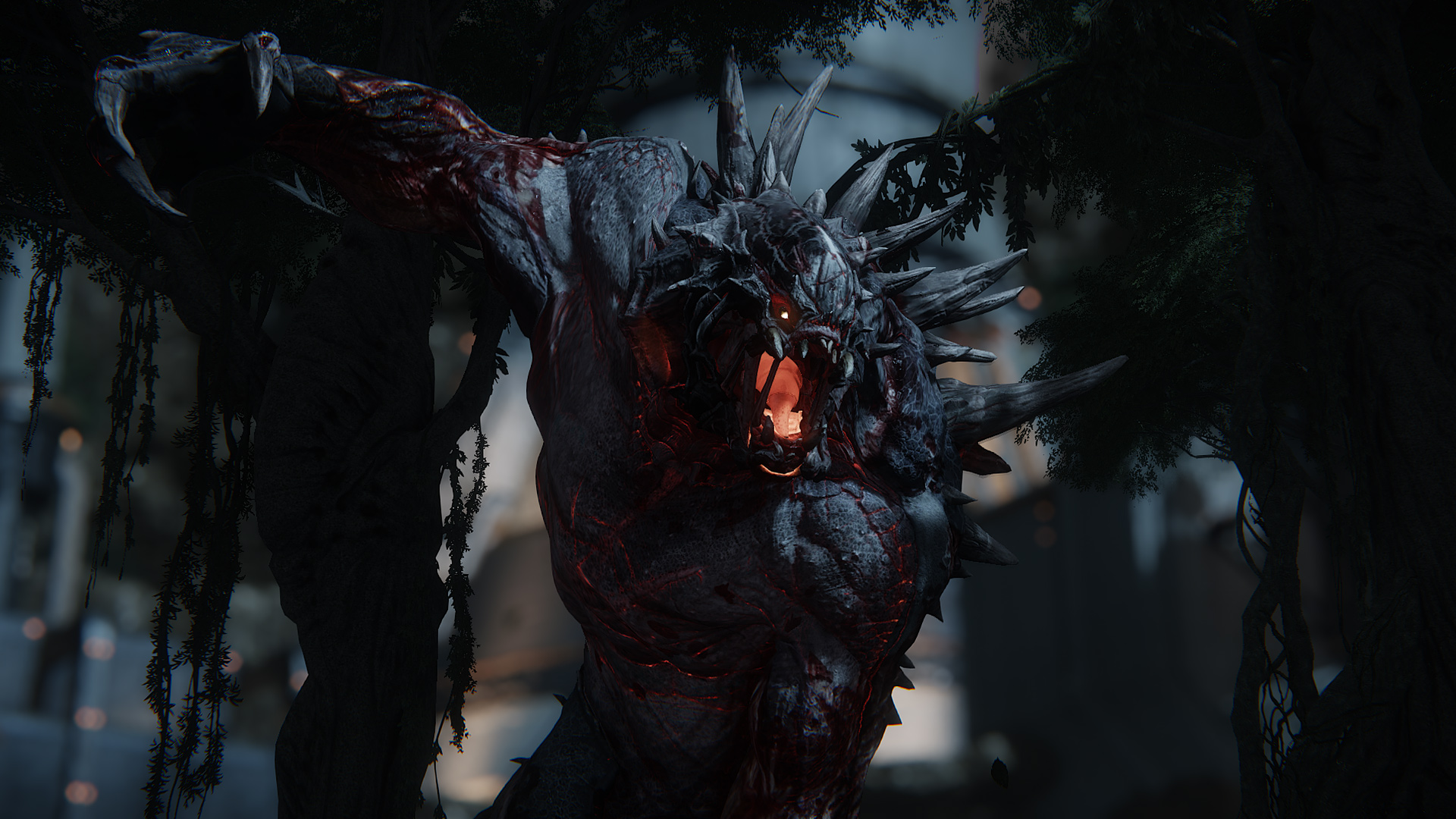 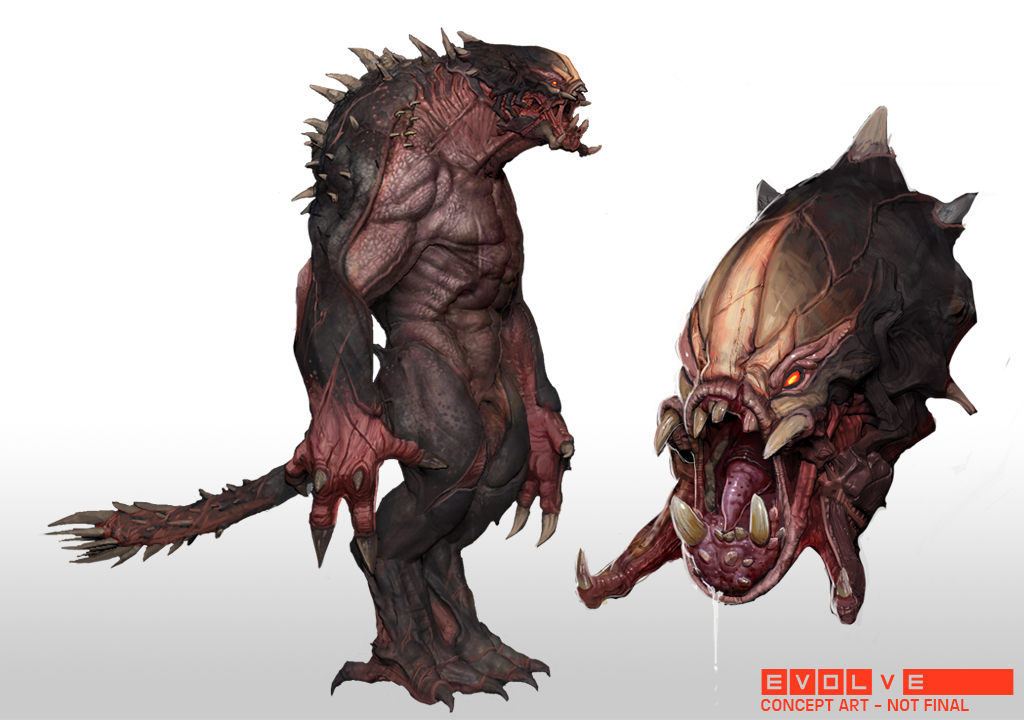 Each of the monsters is distinct both in how it looks and how it behaves, but getting to that point took a lot of iteration. The team started by loading them up with tons of abilities. Once they were implemented in the game, the team saw what worked and what didn't, and started to strip things back until each monster had just a few key skills that defined them. Naturally, that meant throwing a lot away.

One early monster design could spawn parasitic bugs and shoot them at the human hunters. AI would then take over, and the bugs would be like little minions that would act independently. The problem was that this meant that the game was no longer about four people trying to fight one giant monster (controlled by another person); instead, you had hunters fighting off swarms of computer-controlled bugs, ruining much of the tension. It was also a technical nightmare, and was ultimately scrapped. "That was one of my favorites," Robb says of the discarded monster. "The monsters we settled on were the ones that came the easiest in terms of design and technology. We sort of saved the more complicated ones for later."

"There are things that we never even attempted that we thought were good ideas."

While the monsters look like something you might see in a new Guillermo del Toro flick, because it's interactive, the designers at Turtle Rock have been forced to deal with more variables than a film director would. For one thing, unlike a monster in a movie, the Evolve monsters don't have the benefit of cinematic camera angles. The gangly horror in Cloverfield can hide behind buildings and debris, only revealing itself in bits and pieces to maintain a sense of mystery — monsters tend to be scarier when you can't see all of them — but Evolve’s creatures can’t do the same, thanks to the unpredictable nature of player behavior. But the designers were able to use a few techniques to get around this.

The first is level design. "All of our maps are built with some darker areas in them, so that the monsters have some of these areas to lurk around in," says Robb. "There is that sense of mystery in that you don't know where he is and where he might strike." The other solution is a narrative one: instead of over-explaining what the monsters are and why they're attacking people, the game leaves that part completely up to the player. Even the in-game characters don't know the monsters' motivations, and they'll actively wonder aloud just what they might be. You never really know for sure what their deal is.

Though the game is multiplayer at its heart, you can also play Evolve single-player, with computer-controlled bots taking on the other roles. Because of this, Turtle Rock also had to design an artificial intelligence for monsters, which was done relatively late in development. Instead of building it from scratch, the team started by analyzing the way players behaved when controlling the different monsters, and then used that as the base for the AI. Once that was in place, they started adding in new behaviors to make things a bit more fun — for instance, the monsters will sometimes charge right at you in a way that's so sudden it can be shocking. It's not the smartest thing to do, and most players wouldn't do it, but it does make things more exciting. "We're looking at the entertainment, making it fun for the hunters," says Robb.

Like most modern multiplayer games, Evolve isn't a finished product. The launch today is just the beginning — the team will be monitoring the game, and continually tweaking things to make sure everything is balanced and fun. Likewise, it's also a game that — if successful — can be expanded upon in many ways. Those discarded monster concepts don't all have to stay discarded forever. "There are things that we never even attempted that we thought were good ideas, that we'd like to explore," Ashton says of the game's future.

Though Ashton and Robb say that they aren't monster movie aficionados, their game is definitely capitalizing on a moment in pop culture — from the recent Godzilla reboot to Pacific Rim, people seem to love giant, lumbering monsters again. And for Robb, it's not really surprising at all.

"What kid hasn't stomped around the backyard pretending to be a T. rex?"

Evolve is available today on Xbox One, PlayStation 4, and PC