Not a good look for one of the company's top executives

Twitter's chief financial officer, Anthony Noto, cannot stop laughing. It is too funny. OMG, when did you do this? This pic of you is funny, lol. Each of these random clickbait phrases was tweeted out several times along with a link to a site called Flashscore, after Noto's Twitter account was hacked this afternoon. 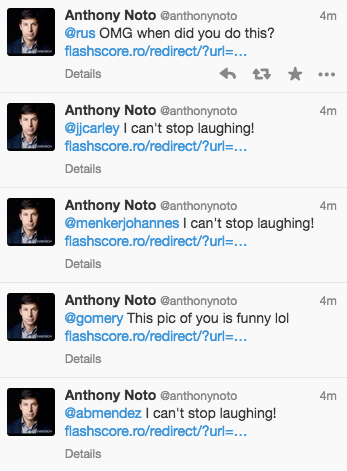 It's not clear yet who hacked Noto or how. Back in November of 2014 he made an infamous Direct Message fail, posting to the public what seemed to be a discussion about a potential acquisition. Twitter has had two factor authentication available since May of 2013, but we don't know if Noto had that enabled. For the time being, the company told The Verge it has suspended his account and deleted the spam tweets while it investigates further.