The Ballad of Rog and Tyrone

Tyrone and Rog are arguing about anime again.

"Tyrone, stop right here you Loli-loving autist, and bow to your senpai," interjects a smirking Rog backed by music from Neon Genesis Evangelion. "My waifu Space Dandy is at least three times as pure as any of your un-kawaii pig dogs. Pardon my lewdness, but I wouldn't even hold hands with your waifu."

Tyrone, back behind his trademark office desk, offers a retort. "If you'd simply open up your mind to moe, your heart will go doki-doki every time!"

"Silence, moe is the cancer killing the industry," responds a defiant Rog. "Space Dandy is truly the Evangelion of this generation."

Tyrone is a Cameroonian immigrant living in the UK, and Rog lives in Australia. They are both middle-aged fathers and have absolutely no idea what they just said.

Rog's real name is Roger Stockburger. He started working in sales and marketing in his 20s and found he had a passion for motivational speaking. He eventually got sick of pitching people overpriced stuff, and moved into more concrete sales, specifically printers and PCs for businesses. When the internet went mainstream in the '90s, Stockburger set up shop there, and it's been his focus ever since. These days he trades stocks, CFDs, and of course, maintains his account on Fiverr, the online task marketplace.

One day in 2013, he logged into that account and found he had received an offer to make what would be this video.

About a year ago, an enterprising member of 4chan's anime board discovered that for a few dollars on Fiverr, you could hire a semi-professional spokesperson to record a YouTube video for you. The service is designed for more corporate-minded gigs, but there weren't any restrictions stopping people from submitting a script about anything. Seriously, anything.

The anonymous 4chan agent thought it would be funny to hire some uninformed, suit-and-tie wearing dad to endorse Kill La Kill in front of a green screen. Kill La Kill is a fairly pervy series that ... well just watch the opening credits.

They were right, it was pretty funny. Rog approached the script with an undeniable geniality, even as he stumbled through tough Japanese pronunciations. His treatise spread like wildfire through the 4chan anime board, and before long he had become one of the most requested vendors on Fiverr; the authoritative voice of the anime community's daily controversies.

"You should've seen the look on my family's face when I showed them my Fiverr and how many orders they were generating," says Stockburger. "It did pique my interest about anime, that whole "my waifu is better than yours" thing. I have two teenage daughters, so it was good to get a deeper insight into what so many of today's kids are into."

But Rog needed a nemesis, and the 4chan hivemind found one in Tyrone. He was another Fiverr user cast as Rog's mortal enemy — the offhand, happy-go-lucky otaku without any skin in the game. If you're familiar with the community, you know this division between hardcore and casual anime fans is key to a lot of the shit-talking you'll find online. That same debate was now being filtered through two men who could not be further removed from the source.

Rog and Tyrone were being used as vessels for a meta-argument that served as both a parody of and commentary on a community they weren't actually a part of. The 4chan lizard brains would pay both Rog and Tyrone to make videos responding to each other's quarrels, which were then edited together and posted on YouTube as a full, roundabout narrative. It's among the most arcane internet phenomena to have ever evolved, but as it turns out, co-opting a corporate meeting room for a nasty argument about Shin Megami Tensei games is magical.

These videos quickly became one of the most defining fixtures on the 4chan anime board, and eventually metastasized throughout the other 4chan boards and into other meme-factories like Reddit and Tumblr. Pretty soon Rog and Tyrone found themselves as the mouthpieces for, well, anything really. Remember the Team Rocket mantra from Pokemon?

In real life, the anonymous man dubbed Tyrone is named Gordon Hurd. He had been working as a journalist and TV presenter in his native Cameroon, before immigrating to the UK after ongoing political harassment encouraged him to move somewhere he would "feel more free." He briefly reported for a news station in Lincolnshire before settling into a number of online businesses, all while running his own Christian ministry, where he's published self-help books and offers life-coaching.

"I was gobsmacked at first. The format was a bit different from what I was used to," says a cheery-sounding Hurd, reflecting on the initial video requests. "I was surprised to see people insulting each other. I was like, ‘Man, why are these guys so rude?' I was really uptight and really worried. But once I started to get a ton of requests, I realized there was something I was probably missing."

"man, why are these guys so rude?"

Rog doesn't get as many requests as he used to, but Tyrone has long transcended his otaku roots. He still gets commissioned for the occasional anime video, but you can also catch him wearing two fedoras in his very own "montage parody," essentially a send-up of the twitchy, Mountain Dew-addled culture surrounding games like League of Legends and Call of Duty. "Did anyone see that no-scope? I rekt that noob. Damn these MLG tryhards are pissing me off." Hurd still has dubious context for what he's saying, but he seems to be loving every minute of it.

"It's fantastic," says Hurd. "Look at the scripts that they write. This is pure genius, these boys are geniuses. When you look at the stuff that they send me to read, sometimes they've written it in five minutes, and it's still so good." 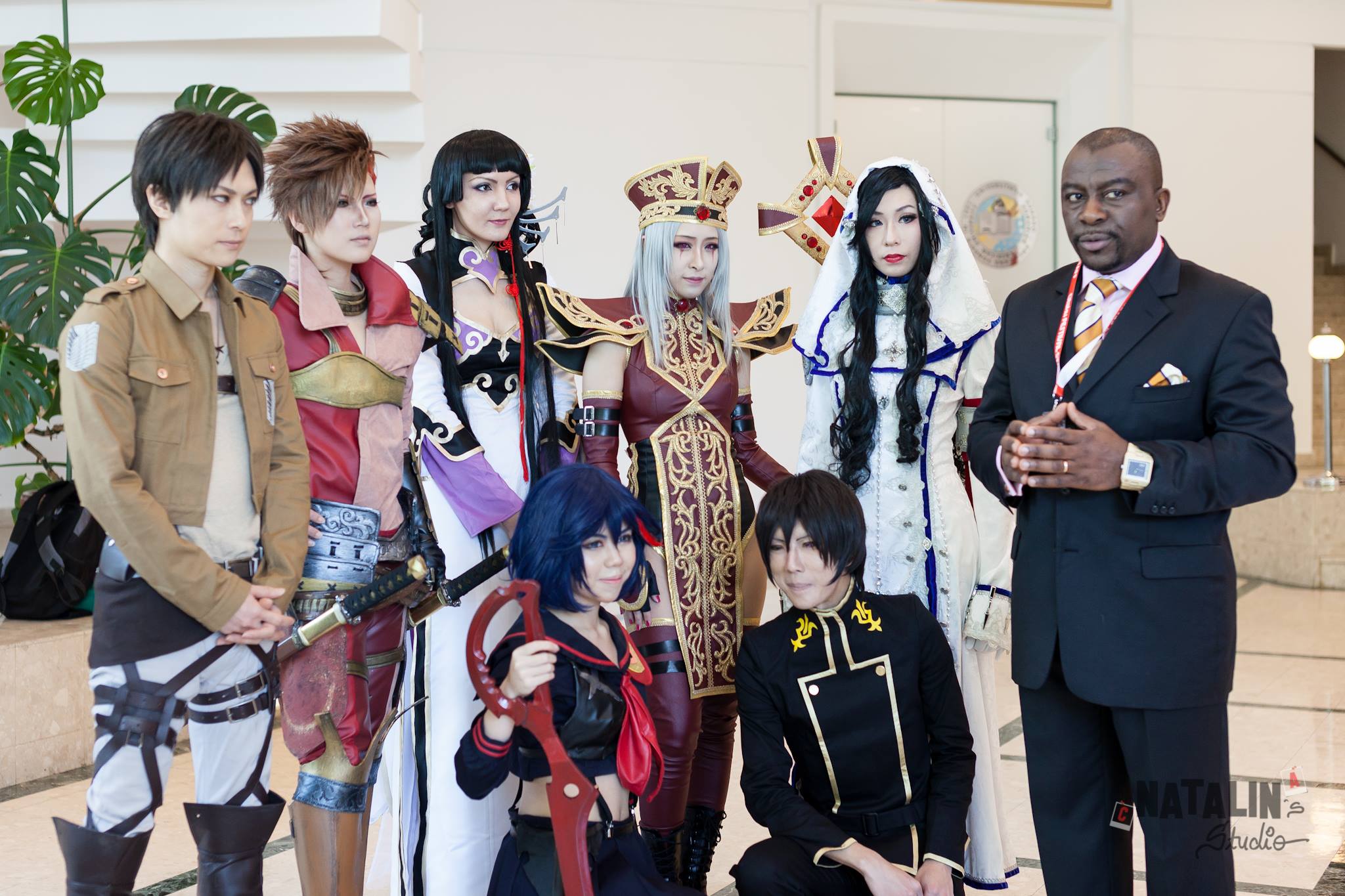 These days "Tyrone" has become his own personal brand. Hurd does most of his business on his own website, which offers higher rates than his old Fiverr account (he says it helps filter out the trolls.) The BigManTyrone YouTube channel is frequently updated, and he has been invited to places as far-flung as Bucharest to host anime festivals. No matter what happens from here, he's happy to be along for the ride.

"Before YouTube there was a Tyrone, and after YouTube Tyrone will live on," says Hurd. "These things are all transient. This isn't a part of my life that's written in ink, but it's a significant part of my life. There are some videos that I've done now where I've encouraged students to do well in their exams, I've done birthday videos. This is something that might pass by, but it does carry vestiges that will live forever."

I spent a lot of time on 4chan growing up. It's something that's increasingly difficult to justify as you get older. It's a site defined by antisocial, anti-women, white-supremacist behavior. Sure, for the most part, it's just a bunch of kids laughing and power-tripping on anonymous shock value, but it's still pretty insidious, and I was right in the thick of it.

I guess that’s why I find the ballad of Rog and Tyrone so reassuring. It’s not entirely innocent — the very notion of dubbing a black man "Tyrone" is already problematic — but it's based in real love. The kids are still asking him for life advice in Q&A sessions. "I’m just trying to connect with a dynamic group of young people who are trying to have fun," Hurd says. "What can be wrong with that?"

There’s insurmountable ugliness on the internet, and 4chan in particular can be a dank, gross, stupid place. But it also gave us Rog and Tyrone, a cosmic accident that could have only been born here. We’re not as different as we seem. We can all get along. Sometimes the only thing worth debating is who’s the most kawaii.