Oops. Looks like you can go to Netflix and watch season three of House of Cards. Trust us, we're watching it right now. The season isn't supposed to premiere until February 27th, but the first ten episodes are here (entitled Chapters 27 through 36). Seeing as we're missing the full 13 episode run, we're guessing this is more an accident.

Update: And it's gone. If you've opened the page, don't hit refresh — trust us. According to a statement from Netflix (via CNBC), this early tease was caused by a "bug in the system."

This is Washington. There's always a leak. All 13 episodes will launch February 27.

If you're curious to read the summaries for the first ten episodes, we're putting them below. Minor spoilers ahead! 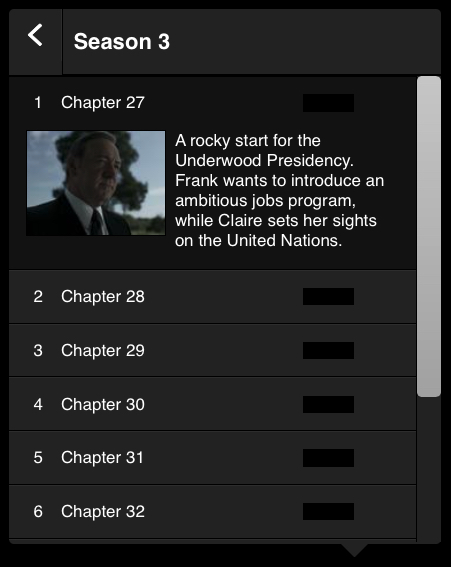 Chapter 27: A rocky start for the Underwood presidency. Frank wants to introduce an ambitious jobs program, while Claire sets her sights on the United Nations.

Chapter 28: Claire's U.N. bid runs into trouble. Frank fights off mutiny with a bold address to the country.

Chapter 29: The Russian president's state visit becomes a cold war of wills, and some punks heat things up.

Chapter 30: Claire bypasses Russia at the U.N. Frank tries to outmaneuver a potential challenger and ends up face to face with a higher power.

Chapter 32: Frank and Claire travel to Moscow to negotiate the return of an imprisoned U.S. citizen. Claire takes a stand that jeopardizes their plans.

Chapter 33: The damage is done and the Underwoods must repair it. But deep wounds don't heal fast, and sometimes not at all.

Chapter 34: A hurricane endangers more than just the entire East Coast and Frank must make a difficult choice.

Chapter 35: The Jordan Valley erupts in chaos just as Frank's campaign is picking up steam. Claire gets disturbing intel and counsels him.

Chapter 36: Frank needs to deal with Petrov one on one while Claire tries to preserve the peace-keeping mission. Sacrifices must be made.