Share All sharing options for: Up close with Glow's crazy laser light earbuds

Big headphones give companies plenty of space to create a distinct look for their brand, like Beats does with its iconic lowercase ‘b’ or Marshall does with its guitar amplifier look. With in-ear headphones, however, that’s a harder task. It’s basically impossible to know what earbuds someone’s wearing if the cords dangling from their ears aren’t red or white. So how do you make an iconic pair of earbuds?

That’s the answer for the team behind Glow. They’re making earbuds with cords that light up with laser light, an idea that’s proven popular enough to get them well past their original Kickstarter goal of $100,000.

The headphones look supremely futuristic, evoking Tron and Star Wars aesthetics, but they still plug into the standard 3.5mm audio jack just like any other earbud. Zi Wang, a Google employee who advises Glow in his spare time, says he didn’t want to stop customers from using the headphones if the battery wears out. (Glow should last about eight hours per charge, but can be fully recharged via USB in about 30 minutes.) 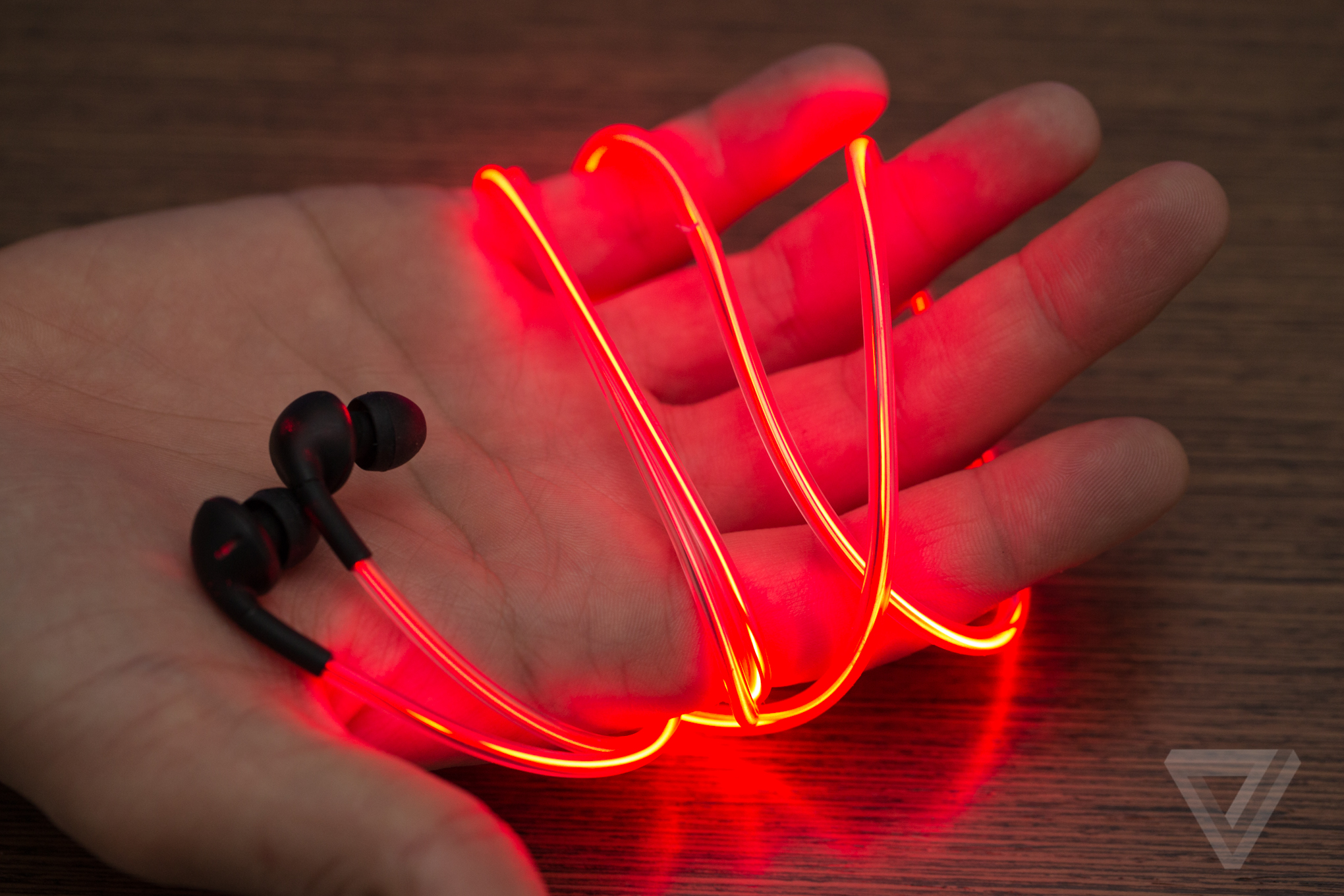 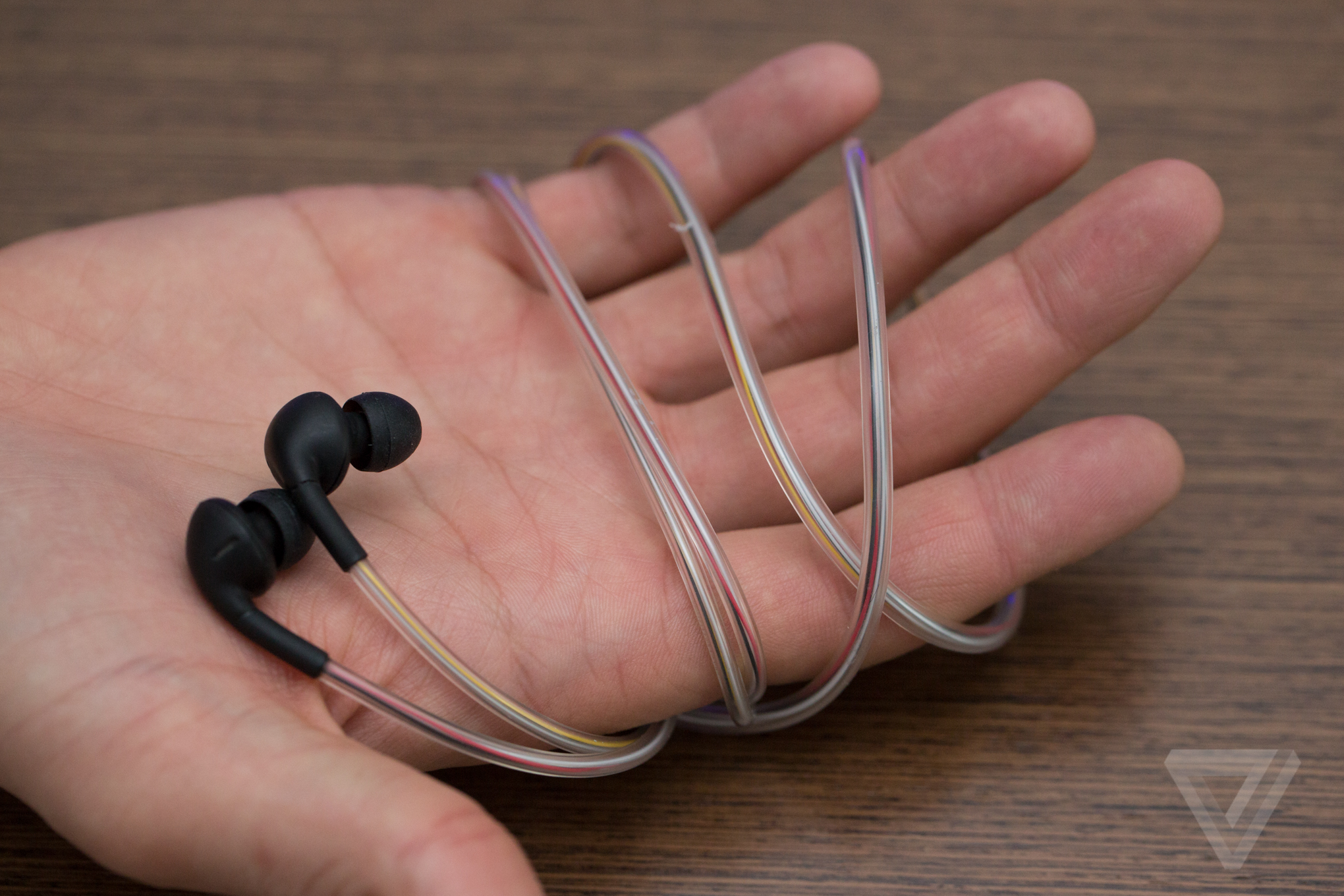 Wang said the inspiration originally came five years ago at Burning Man, where he saw attendees wearing clothing and items modified with electroluminescent (or EL) wire, the same material used in this terrifying viral video. It’s a thin copper wire surrounded by phosphor which glows when a current is applied, with the color effects usually coming from an outer layer of PVC. For him, the obvious next step was to bring the idea to headphones, so he gathered a team together and began working on Glow.

"It was just dumb luck."

While they were developing the idea, Wang saw that Corning — the company behind Gorilla Glass — was working on a material called Fibrance. It’s a fiber optic material that works counterintuitively to typical fiber optics; instead of allowing the light to travel through the wire unabated, tiny particles regularly scatter the laser, which creates the glowing effect. Corning originally developed it for companies looking to grow algae because of its characteristics: Fibrance doesn’t give off heat, and the light glows evenly along wire, so it made for an ideal solution to light the submerged plant. The Glow team found out that Fibrance is more flexible, offers better color reproduction, and is 10 times brighter than EL wire, so they started developing Glow using that. "It was just dumb luck," Wang says.

I saw a few prototypes of Glow here in our office this month, and it’s an eye-catching product to say the least. The luminance of the laser-lit cords is striking even in a brightly lit room. And the light is steady, unlike LEDs where movement can cause a flickering effect. Glow will be offered at launch in red, green, and blue variants. The headphones come with the option to pulse to whatever music is being played through them, and while that sounds annoying, the color quickly fades in and out instead of strobing on and off. It actually makes for a pretty pleasant effect.

The cord material is much softer and more flexible than I imagined it would be. It easily wraps around your finger, but is springy enough that it should be difficult to tangle into knots. I didn’t mind the thickness of the prototypes that I saw — the cords weren’t much thicker than the one on my daily-use headphones, a pair of Sony MDR 7508s — but Glow’s head engineer Rafal Zboinski says that the consumer run could be even thinner.

There’s more to Glow than just colorful laser light. There’s also a five-button controller clip near the bottom of the cord that connects to your phone over Bluetooth LE. At the start, it will allow for standard controls like pause, play, fast forward, rewind, and volume. The center button can activate voice controls or be used as a shutter button, too.

But the longer-reaching plan is to open up the power of the ARM processor inside the controller to app developers. Wang says some functionality has already been built to steer Android developers in the right direction. For example, Glow can contextually respond to incoming messages. Is someone asking why you’re not at that meeting that’s on your calendar? Just tap up on the controller to quick reply with a preprogrammed message, like "I’m on my way."

If Glow passes its $500,000 stretch goal, the team will bring that kind of compatibility to iOS as well. In the meantime, only the basic controls will work on iPhones. The company’s other stretch goals bring us back to the lasers. Passing $750,000 will bring the ability to match the blinking light to the pace of your steps and movement by using an accelerometer inside the five-button controller. If Glow reaches the $1,000,000 level, pulse oximeters in the earbuds will be able to pulse the light along with beat of your heart. Both of these technologies are becoming common in wearables, but it’s refreshing to see a company find a new way to utilize them instead of overpromising on their health tracking capabilities. 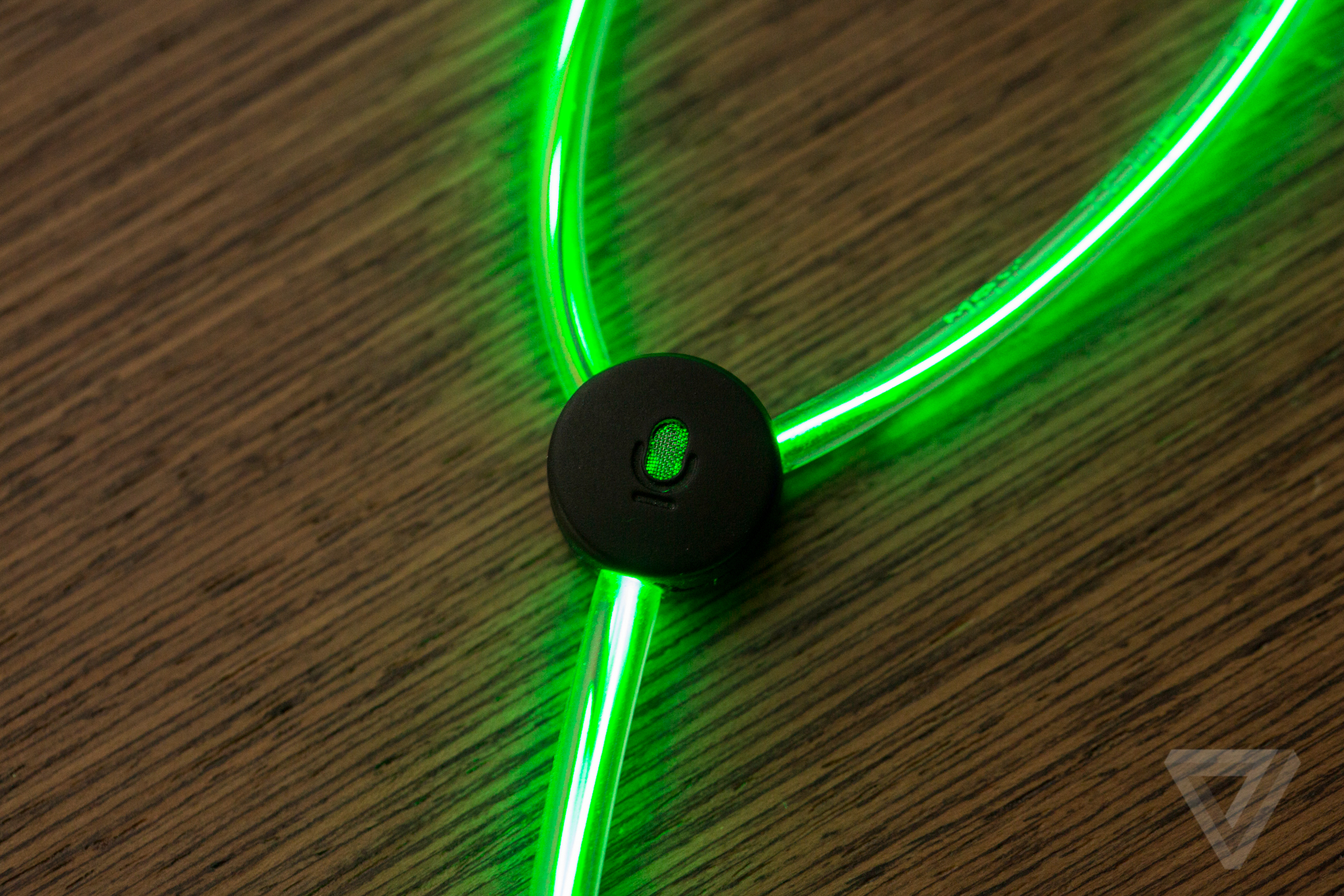 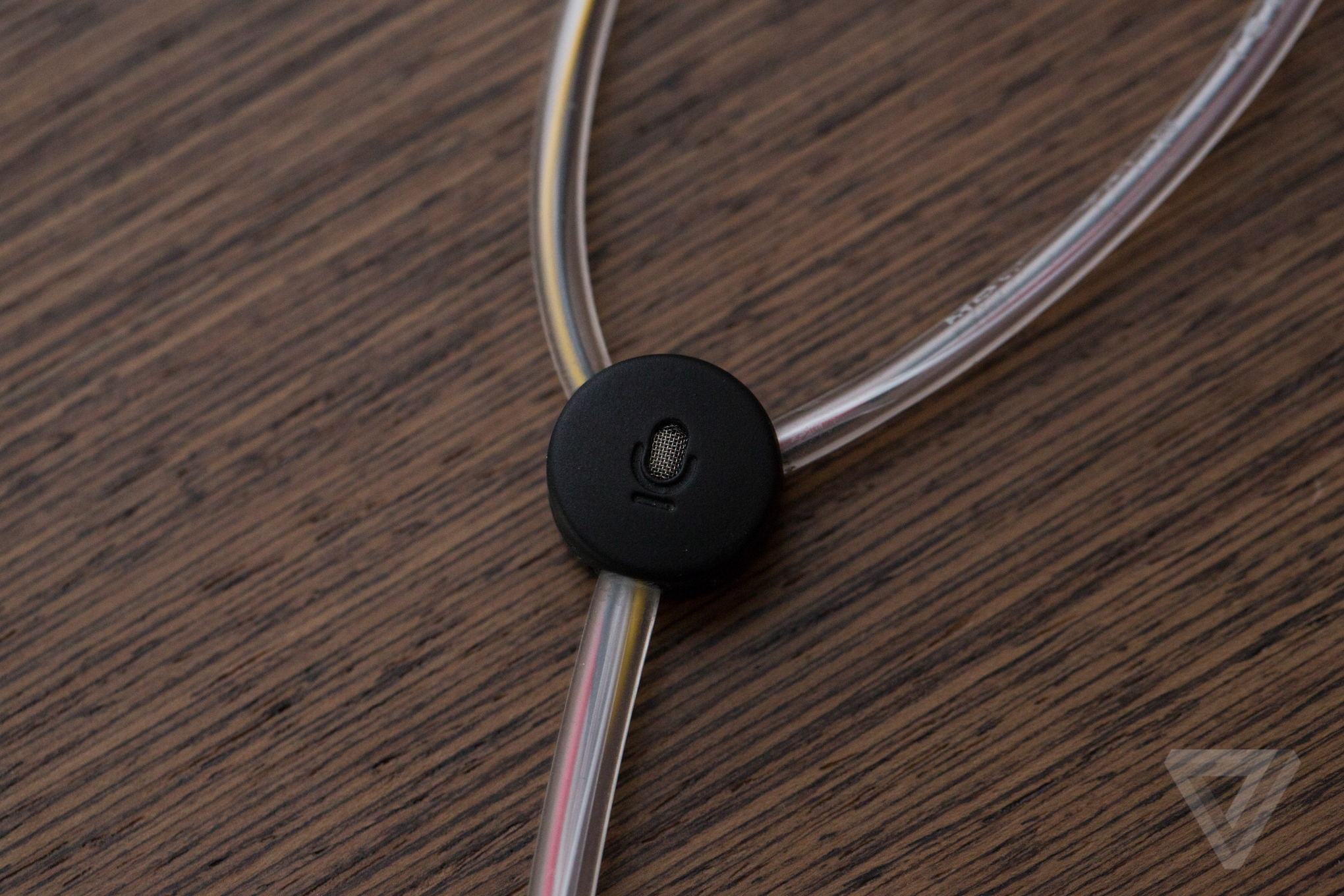 Wang and Zboinski are also promising premium sound, an important point they admit they haven’t focused on enough while campaigning. "We got so excited about lasers, we didn’t actually talk about that it is supposed to be a premium headphone," Wang says. He names Shure’s in-ear SE215 earbud as comparable model for sound quality. That would mean that customers could expect clear, neutral sound from Glow instead of the bass-heavy experience commonly found with other premium earbuds.

Wang, who has worked on Android for the last six years at Google, has trouble hiding his excitement about the project. "I’ve worked on every single Nexus device. This is the most intimate experience I’ve had so far," he says. That doesn’t mean he’s ready to make hardware full-time though, and apparently neither is his family. "My mom doesn’t want me to quit Google."